With an Intel Core i5 1.8Ghz processor backed up by 6GB RAM and a 128GB SSD, the Samsung Series 7 Ultrabook flies in regular tasks. Switching between different browser windows and applications is smooth and snappy. Boot up and restart times are impressive as well, at under 10 seconds from cold, and less than 15 seconds from a restart. Its 4,399 PC Mark 7 score is marginally lower than the Microsoft Surface Pro, but not noticeably so.

The Series 7 cleared the lower level Ice Storm 3DMark gaming tests with no problems, getting into triple figure FPS on the easier tests as you’d expect with a 1GB AMD Radeon 8750M graphics card inside. On the mid-range Cloudgate tests, it fared less well with tests aimed at notebooks and home PCs, but still managed 20FPS for the most part and an overall score of 3,740 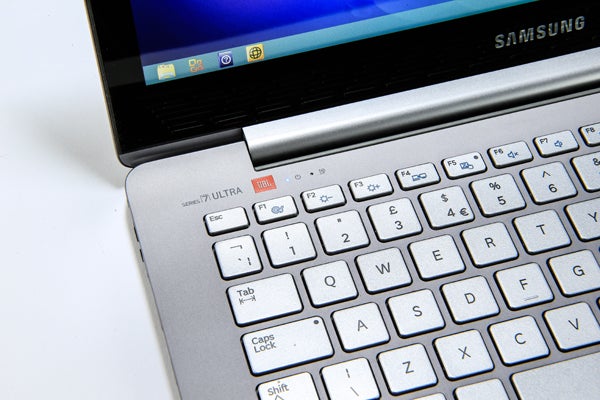 Of course, 3DMark is designed to push graphics cards, and often real world examples give a better idea of performance, so we installed Steam to see how it would deal with a couple of recent hits. We’re pleased to report that both LA Noire and Batman Arkham City were just about playable at 1,920 x 1,080 – although in the larger outdoor sections you would want to drop the detail and resolution for it to be completely smooth. We also installed Fallout New Vegas for an older game, and found exploring the expansive desert landscape smooth even with high detail.

In short, while it’s not aimed at gamers, the Samsung Series 7 Ultra NP740U3E is fast enough to play quite a few games new games at medium detail settings, and older ones at high quality settings. That’s far more than you can say of most ultrabooks.

Because the base of the Series 7 is pretty thin, unsurprisingly it gets warm, even on simple activities. It’s not uncomfortable, and the underside takes most of the heat, so there’s no chance of burning your fingers while typing.

Noise wise, though, the fans are impressively quiet, and you’ll only really notice any noise at all if you’re in a completely silent environment. Impressively, even when running intensive 3D games, the heat doesn’t step up too much, and the fans don’t make much more noise either. 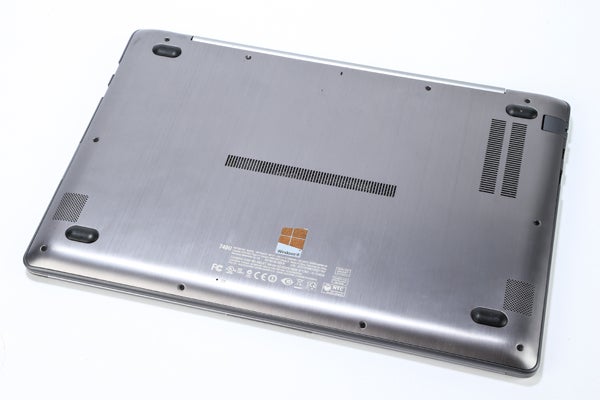 In the Powermark battery benchmark with the screen set to its default 40% level, the Samsung Series 7 Ultra NP740U3E lasted five hours and 53 minutes. That’s a decent result, but quite a long way from the very best ultrabooks.

Unfortunately, it’s not the quickest to refuel. Switched off and plugged in, the Series 7 regained just 20% of its juice with a half hour charge, around an hour and 10 minutes real world usage. It’s not the worst we’ve seen, but it’s significantly less than the 13-inch MacBook Air, which gained 40% of capacity – enough for nearly four hours of use – in the same test.

Indeed, the battery tests show that, though the price is similar, this is quite a different laptop to a MacBook Air or similar slim ultrabook. It just quite doesn’t last long enough for all day use, though for most people it’s more than good enough.

Used as our main laptop for the review period
Tested for at least a week
Used consistent benchmarks for fair comparisons with other laptops
Reviewed using respected industry benchmarks and real world use
Previous
Samsung Series 7 Ultra NP740U3E Review Next
Keyboard, Touch Pad and Verdict Review