What is the Samsung Powerbot VR9000?

The Powerbot VR9000 is Samsung’s latest flagship robot vacuum cleaner boasting a host of sensors to navigate your room and avoid obstacles, a wide drum brush promising comprehensive cleaning and CycloneForce, which Samsung claims delivers up to 60 times more suction than some other robot cleaners on the market.

It’s quite a chunky beast with ‘bling’ design festooned with LED indicator lights and segmented display. It will find its way back to its charge dock even if its power is flagging while in another room, and it comes with a remote control that enables you to laser-point to dirty spots that need extra attention. It’s fully programmable and comes with a virtual guard tower that can be used to avoid areas or pen it into a single room. 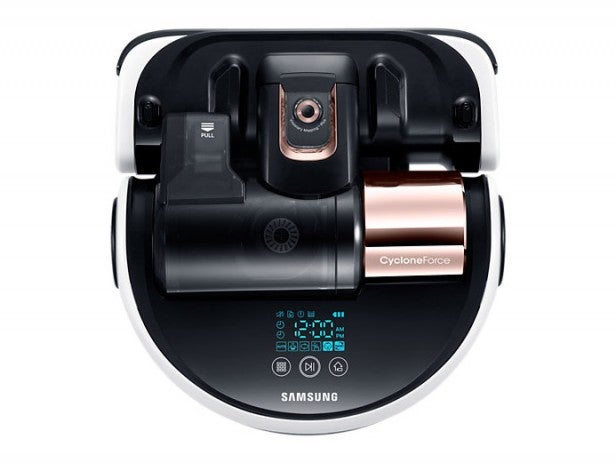 Key to the Powerbot’s abilities are its large brush bar, which at over 31cm wide gives a considerably larger cleaning width per pass than many of its robo-peers. It also makes the Powerbot itself very wide and the large cyclonic drum makes it tall, too. 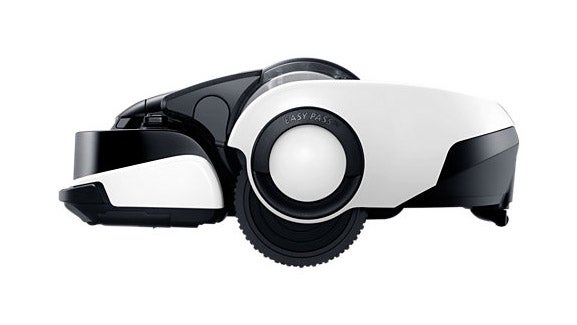 This does help in that the dust bin is a fairly reasonable 0.7-litre in capacity, but that extra height means low sofas are a challenge. The Powerbot couldn’t get underneath our sofa or armchairs (a 12cm tall gap), which rather negates one of the great appeals of robot vacs. 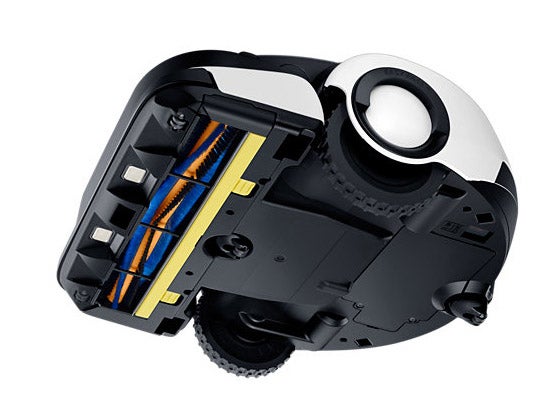 The base station is a relatively light and slimline affair by comparison with an external power supply on a mains lead. It needs placing firmly against a wall and the cable needs to be off the floor or tacked close to the edge to avoid it getting in the way of the cleaning. Our hard floor gave little purchase to the base station, so the Powerbot caught up with the lead, dragging the base station out, and also tended to nudge the base away as it tried to dock. We resorted to Blu-Tack on the skirting to keep it in place. 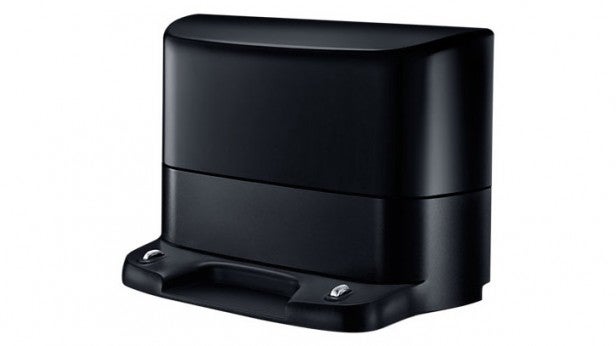 Rather than a magnetic strip used as a barrier to hem in more adventurous robot vacs, the Samsung comes with a Virtual Guard emitter. Running on supplied batteries, it creates a invisible ‘virtual’ line about 2.5m long that the Powerbot cannot cross. This can be used to hem it in a room or ensure it avoids more fragile obstacles. More Virtual Guards can be purchased and installed if required, but the option is obviously a considerably more expensive proposition than magnetic strips if you need a few. 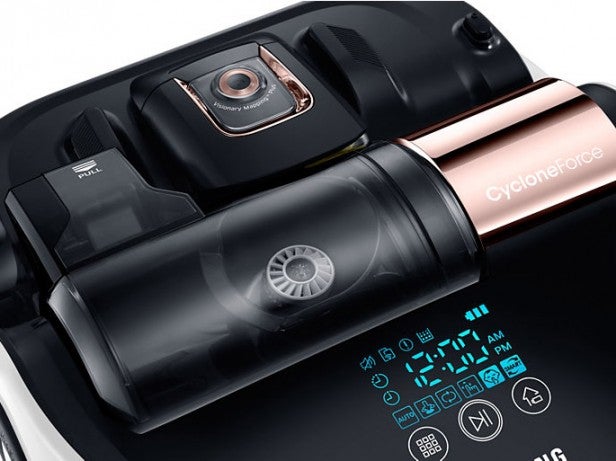 Setting up the Powerbot is relatively straightforward – just select a programme from the top buttons or remote control and press start. Timed and scheduled cleaning is available when you have set up the clock function. This model has an easy to remove and empty bin, proper cyclonic vacuum system for higher suction than simple fans that most robot vacs use, and comes with a spare filter and cleaning brush. After 160 minutes on charge, the display reads full and you are ready to set it on its merry way. 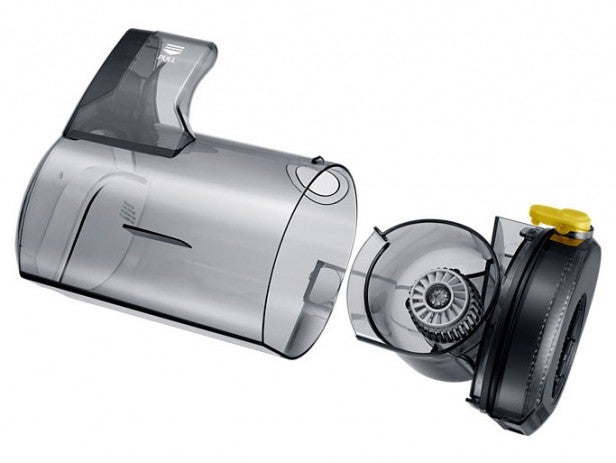 The Samsung boasts a raft of sensors to help it map out and navigate the room for thorough cleaning, avoid falling off ledges and navigate around obstacles. The most obvious of these is the top mounted camera, which proved very good at pulling the Powerbot up short of colliding with obstacles. In fact, this was one of the most gentle cleaning robots for protecting furniture we have yet to test as it bumped into very little.

Its five cleaning modes cover Auto, Spot, Max, Manual and Point, each with subtly different parameters of operation. The Standard Auto mode sets off the Powerbot across the room where is seems to sweep in arcs measuring and mapping the room. If there is logic to the cleaning pattern we could not see it, but it managed to cover the entire room, save its inability to get under the sofa.

The Spot clean mode is ideal for small dry spills. You manually place the Powerbot in the centre of the debris and it navigates its way around an area approximately 1.5m x 1.5m around the spot until its down facing sensors declare the area clean. If it’s in sight of its base it will shuffle back home for a recharge, too. The Max clean mode increases the cleaning power with a commensurate increase in noise and decrease in run-time. Although, as we found, the run time was still enough to get around our lounge, the additional cleaning power was well worth the reduced run time. 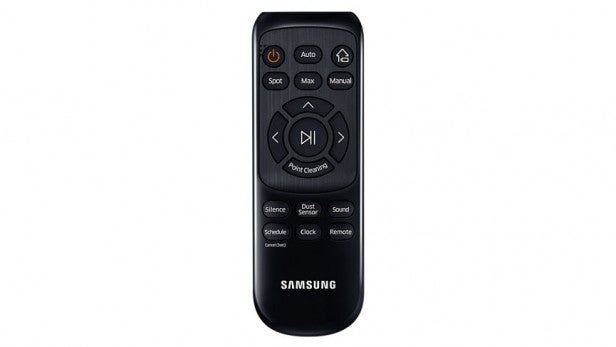 The most entertaining modes are, however, Manual and Point. Manual allows you to steer the Powerbot with the direction keys on the remote control and the Point mode allows you to use the remote’s laser pointer to indicate areas that need a little more attention during any program. Remote control and laser pointers? We can see this being the best robot vac for cat owners already.

Navigation is a bit hit and miss for the Powerbot. The sensors do a fine job of ensuring every inch of a room is covered, but its ability to negotiate small steps, either up or down, and propensity to catch cables and other debris let it down badly.

In full Auto mode it uses a mixed path of straights and long sweeps to map the room and while this looked odd, it did go over all five of our test areas in the room thoroughly. It approaches chair legs and walls by slowing, stopping and turning and so is very kind to your furniture. The only caveat is it seems to have a slight blind spot to the corner as it does a sweeping arc, which meant it once collided with a bike in the hallway and pushed it over. It was a tough test and otherwise its navigation abilities are first rate.

However, our thick rug in the middle of the hard floor was a constant battle for the Powerbot. It would mostly see it as a permanent obstacle and steer away from it, but every few passes it would then attempt to mount its way onto the rug. This it struggled with as the leading edge tended to catch up on the 18mm tall rug edge, sometime it would bump up onto the rug and others it would wiggle around a bit and eventually abandon the idea and go off in a different direction. 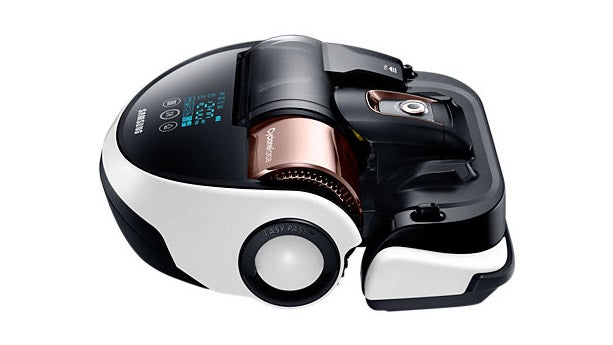 We also have a 3cm drop between the hall and the office. Most robot vacs have seen this as either a drop and avoided it or charged on across into the other room. The Samsung couldn’t makes its mind up going down hesitated and then managed to get itself stuck on the step.

Due to the large size traditional brush bar, Samsung hasn’t gone for side sweepers on the Powerbot. Unfortunately, the body of the machine is still significantly wider than the brush bar, so edge cleaning was fairly poor although the square fronted shape did mean it got fairly close into corners.

The Samsung’s cyclonic vacuum technology gives it plenty of suck as it goes around and combined with the good all-room navigation none of our five test areas were left unaddressed. The four on the hard floor were efficiently cleaned for a robot vac, with the bulk of the powder picked up and only very fine powder ‘stain’ left behind. 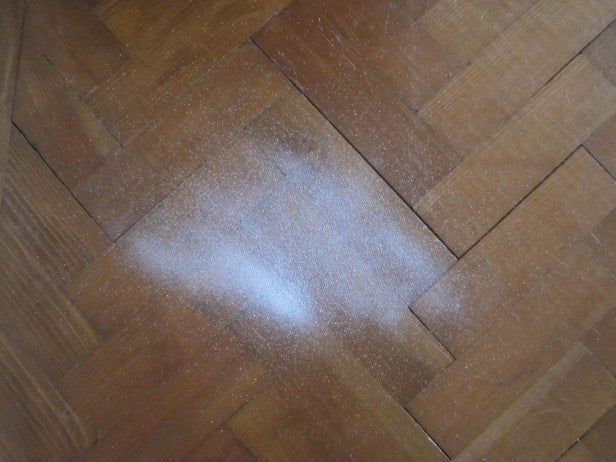 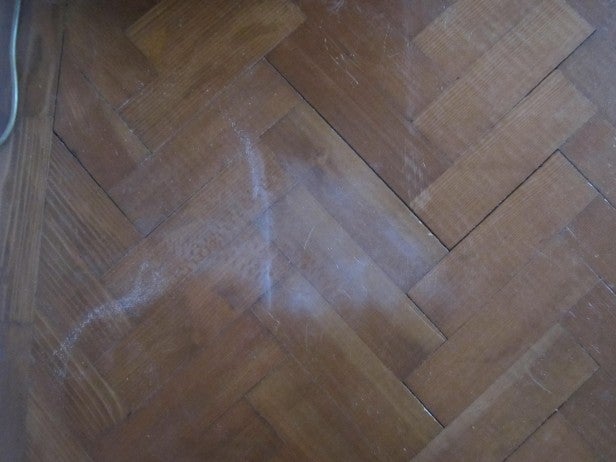 Thanks to not having horizontal side brushes, nowhere was debris pushed
out of the way or flicked under furniture, although edge cleaning was
resultantly poor. The powder placed close to the brick fireplace highlights this, as you can see plenty of dust left behind between the tyre tracks and the brick edge. 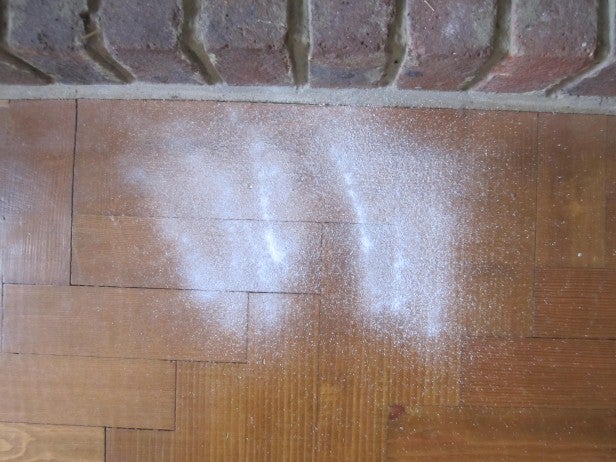 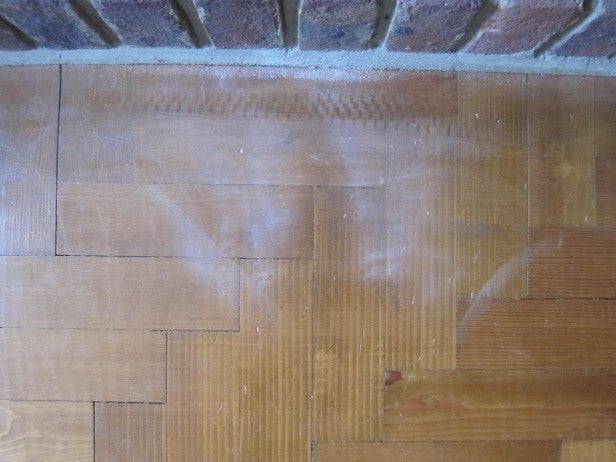 However, where the Powerbot really let itself down was the carpet cleaning, turning in the poorest result of all the robot vacs we have tested to date. Much of this is due to the Powerbot’s inability to get up onto the test rug on every occasion it came across it, although one would have thought it would have detected an area to be cleaned as it got up onto the rug on several occasions. As you can see from the photograph, the powder X is clearly visible with several areas of the rug untouched by the Powerbot. 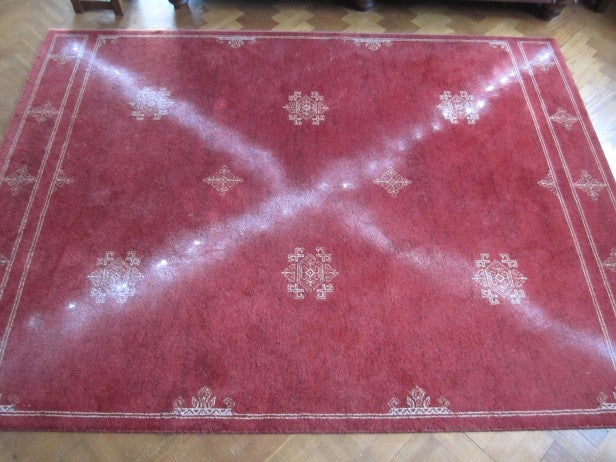 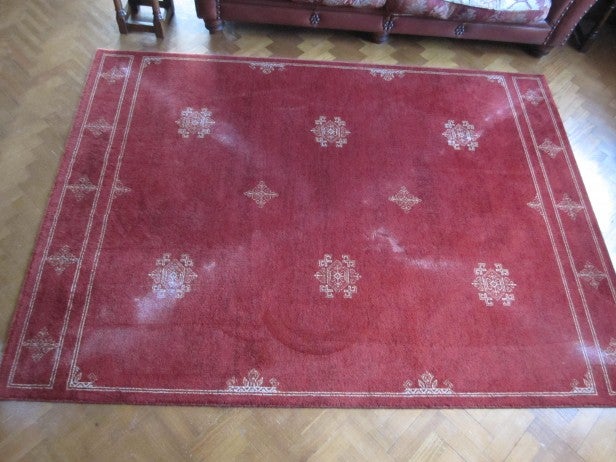 To give the Powerbot a better chance of cleaning the carpet we ran the test again putting the machine in the middles of the carpet and engaging Spot mode. This had a markedly better result for cleaning efficiency, but as soon as the Powerbot drove off the rug it struggled to get back on and abandoned its spot clean programme to return to base, only to get irrevocably caught up in a cable to the standard lamp.

Clearly some of the parameters of our test room, including the low furniture, trailing cables and thick rug caused major problems for the Powerbot, which was otherwise navigating and cleaning well. Your mileage may vary, but the cleaning results aren’t as impressive as Samsung’s claims lead us to expect. It’s certainly more powerful than most robot vacuum cleaners, but that power doesn’t translate into a superior cleaning experience. 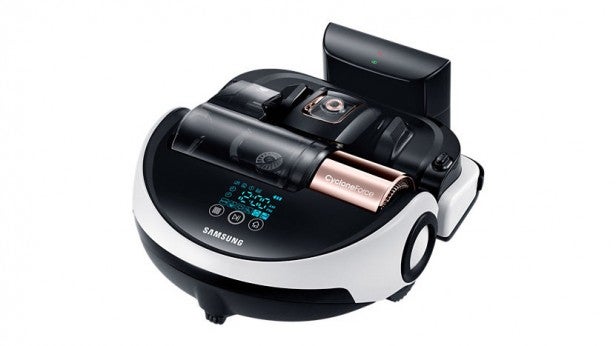 Should I buy the Samsung Powerbot VR9000?

The Samsung Powerbot VR9000 isn’t significantly better or worse than other robot vacuum cleaners we’ve tested, such as the Miele Scout RX1. It cleans slightly better than some, but it struggles with small steps and rugs and doesn’t clean up to edges at all.

It’s above average by robot vacuum cleaner standards, but you’re probably better off investing in a top-end standard vacuum cleaner or, better still, a cordless vacuum cleaner like the Dyson DC59 or Vax Air Cordless Lift. They clean better and, being cordless, take most of the pain out of regular vacuuming.

A decent robot vacuum cleaner, but not good enough that we’d recommend you buy one.