Versatile with great cleaning, albeit with a small bin

Review Update 15/06/15: Dyson recently revamped its cordless vacuum cleaner range. It’s added the new Dyson V6 Fluffy that comes with an innovative new cleaning head designed for hard floors. The DC59 is now known as the Dyson V6 or the Dyson V6 Animal if you add the animal specific cleaning heads, but they remain fundamentally the same machine as the DC59 reviewed below.

What is the Dyson V6?

There’s a revolution going on and it’s powered by batteries. From the Gtech AirRam to the Bosch Athlet, lots of brands now have cordless vacuum cleaners that aim to give you greater freedom without compromise and the Dyson V6 is one.

A follow-up to the Dyson DC34, the Dyson V6 aims to provide the same cleaning performance of Dyson’s larger vacuum cleaners but in a small, portable and cordless body. It claims a 20-minute battery life and is light enough for most people to use single-handed. Moreover, unlike Dyson’s handheld models, its long arm attachment means hard to reach areas are easy to get to. It’s now cheaper than when we first reviewed it (down to £280 from £350 at launch), making it better value than before.

The Dyson V6 makes a great first impression. This isn’t the sort of ugly vacuum you want out of sight in a cupboard, it’s a good-looking modern gadget. It’s also packed full of thoughtful design tweaks that show Dyson has thought hard about how people will use the DC59.

One of the biggest is the power button. Rather than a simple on/off switch button, the V6 has a power trigger you must hold down that helps extend the functional battery life

That’s because the trigger system means you never leave it running unnecessarily, which makes the difference between the V6’s battery life and the 40-minute cleaning time of the Gtech Air Ram less pronounced. It also matches up reasonably well to the Bosch Athlet when used on its ‘normal’ setting, though the Bosch claims up to 60-minutes when used on its lowest power setting for hard floors.

In practice, we found the V6’s battery life was more than ample for a couple of full sweeps of a moderately sized two-bedroom house. 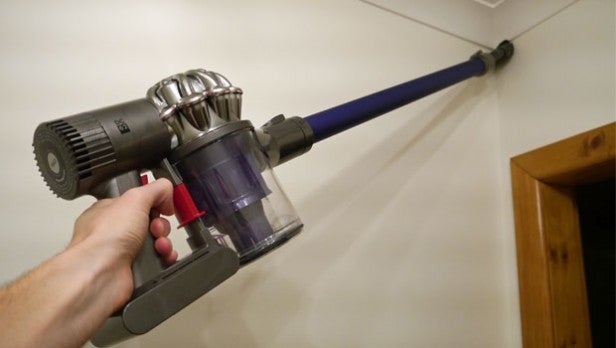 With all this said, it does reinforce the fact the Dyson V6 is really a vacuum cleaner for smaller households, or a secondary cleaner for quick ‘top-up’ cleans. Its size and nimble design make it ideal for small houses and flats, but it’s a tight limit to clean a large family house in 20 minutes.

That argument is supported by the limited 0.4-litre dust capacity, a decent amount less than the 0.9 litres of the Bosch Athlet. As with the battery life, 0.4-litres is enough for small homes and flats, but it’s not enough for larger homes if used as your primary cleaner.

But what the V6 lacks in capacity, it more than makes up for with lightness and ease of use. The Dyson V6 isn’t too hard on your wrist or back as it weighs just two kilos (about the same most laptops). It’s easy to tilt it to the ceiling or reach tight corners with minimal strain, which is down to how evenly its 2kg weight is distributed. It’s an incredibly well balanced machine.

Our only other small complaint is the number of scuff marks and blemishes the motorised cleaning head acquired after just a couple of weeks of use. It’s not a critical problem, but we expect a little more hardiness at this price. 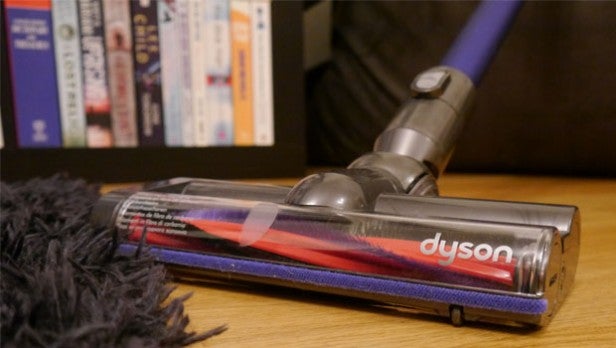 The Dyson V6 comes with plenty of accessories to tackle a variety of jobs. The main one is a motorised cleaning head for normal carpets, but it uses more power so there’s a standard non-motorised one as well in addition to the crevice tool and bristled extension for those more delicate areas.

All of these attachments fit either directly to the body, or at the end of the one-metre rigid extension, which means the Dyson V6 comfortably doubles as a handheld vacuum (for car interiors, table tops etc.) and a standard vacuum for normal housework. It’s an incredibly versatile machine.

But, while we love V6’s versatility and dexterity, its most practical feature is the neat wall mounted docking station. The dock, which screws into the wall, is a brilliant addition that stores and charges the vacuum, and holds two cleaning attachments. It’s useful so that you don’t forget to charge the V6 between cleans – an important point considering the 20-minute battery life.