What is the Samsung NX1?

The Samsung NX1 is the sort of camera we’ve always hoped Samsung would make. The company is a king of forward-looking tech in other areas, but Samsung often seems to lag a little behind with its enthusiast cameras, where veterans Nikon, Canon and Sony often have the edge.

Samsung has used its experience with everything high-tech to great effect in the NX1 compact system camera, though. It has more firsts in the bag than an Oxford University computer club.

Some are neat fluffy extras, but one is at the heart of image quality. This is the first APS-C camera to use a BSI sensor, the kind of performance-increasing design that lets the tiny sensors in mobile phones produce somewhat-good images.

Offering some of the best image quality ever seen from an APS-C camera, alongside performance that absolutely shames much of the competition, the Samsung NX1 sets a new standard for CSCs and DSLRs alike. At £1299 it’s more expensive than full-frame models such as the Sony Alpha A7, but that doesn’t detract from one fact: this is a fantastic camera. 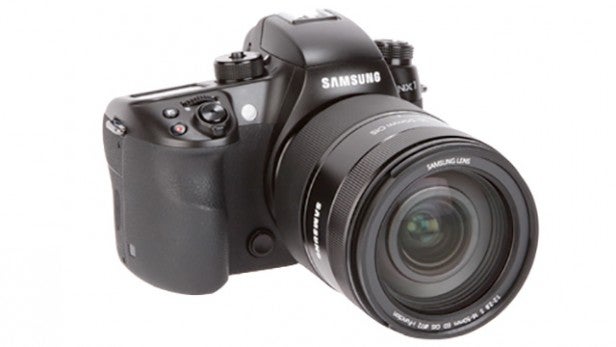 The Samsung NX1 is a compact system camera, but one that looks rather DSLR-ish. It’s big and chunky, with a shape designed more for ease of handling than compactness.

This isn’t so much a negative point as something you need to consider before buying. The NX1 is a similar size to the Nikon D7100, an all-out DSLR.

Its exact measurements are 138.5 x 102.3 x 65.8mm, and it weighs 550g without a lens. It is not all that light, and you need to consider the weight of the lens on top. Samsung’s premium S-class lenses are particularly heavy, and would be an obvious fit for a high-end camera like this. The 16-50mm S ED f/2-2.8 lens weighs a whopping 622g, making the full package well over a kilo. 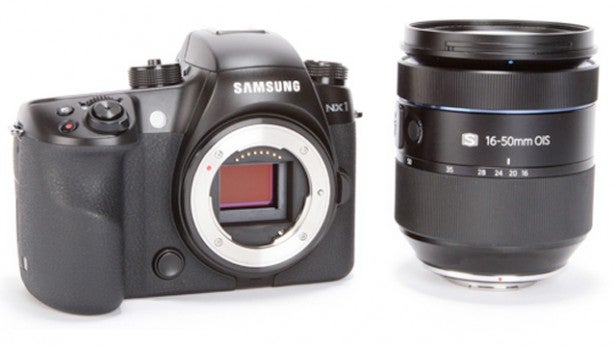 It may be an imposing prospect, but we otherwise like the Samsung NX1 design. It offers a sure grip, and a very clean approach to layout.

It’s clean, with definite lines and no extraneous hardware buttons to confuse. As with most cameras, the action centres around a mode dial with the standard P/A/S/M modes, making it easy to use for less experienced photographers.

The one niggle we have is that some of the function buttons on the back are just far too small, making some operations feel more fiddly than is really necessary. It’s not as if the Samsung NX1 lacks room for some slightly larger buttons.

Manual control is good, though, with rotary dials for your thumb and forefinger sitting to each side of the shutter button. Another sign this is a real high-end camera is the secondary, monochrome display on the top plate, a great way to quickly check your settings and battery level.

As the Samsung NX1 is a CSC rather than a DSLR, it uses an EVF rather than an optical viewfinder. However, this is just about the first time we’ve reviewed a camera that offers an EVF that can stack up to, and even exceed, an OVF.

That digital tech is finally up to speed. The Samsung NX1 has a 2.36-million-dot electronic viewfinder, offering the sort of display resolution that doesn’t feel compromised. Even though we live in a world of phones with more pixels than last year’s 65-inch TVs, camera EVFs are often desperately pixel-poor. 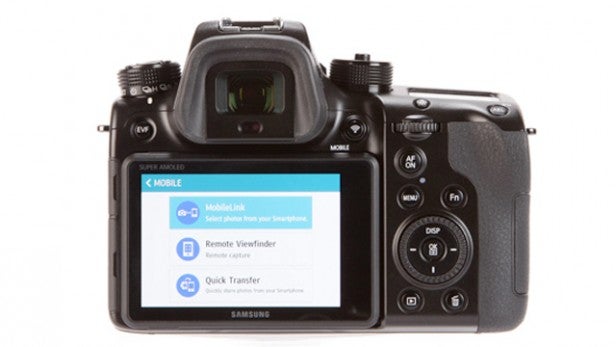 The NX1’s, though, is lovely. It’s quick as well as sharp, too. With 5ms display lag, there’s no discernable delay between what’s on-screen and what you’d see with your eyes.

Of course, a high-quality display alone isn’t enough to trump a more traditional optical viewfinder. You also get focus peaking and 5x magnification, making it simply fantastic for manual-focus shooters.

If you’re new to digital focus aids, the focus peaking option highlights in-focus areas of the preview image, giving you a much more reliable judge of focusing than just using your eyes and a digital display. This is the sort of EVF we’ve been waiting for, and while it’s not quite as intriguing as the FujiFilm X100T’s hybrid viewfinder, it is about as good. Its actual resolution is XGA: which you can think of as a 4:3 equivalent to 720p.

The screen on the back of the Samsung NX1 is less of a standard-setter, but it’s still very solid. It’s a 3-inch display of 1037k dots, again using Samsung’s favoured OLED display tech.

Unlike so many other high-end cameras, even brand-new ones, the NX1’s display embraces new tech including the bits that are usually associated with a more casual style of photography. It offers touch control and a tilt display. Some high-end cameras turn their noses up at these features because they don’t fit with the ‘viewfinder and manual controls’ style of serious photographers. The truth is they’re often useful.

The tilt display is great when you want to shoot above or below head height, while the fairly good touch implementation can be great when you do just want to take your photography more casually. You can touch-to-focus and touch-to-shoot, and also use multi-touch to apply focus and exposure metering points separately. While Samsung has fallen a bit behind the competition in terms of things like pure photo quality at times, it’s ahead in these ‘smart’ areas.