The Nikon D7100 is an update of the now three-year old Nikon D7000. Although the D7000 arrived at a time when many weren’t expecting it, as Nikon had the enthusiast DSLR market relatively well catered for with the D90 and D300/D300S, it proved incredibly popular with its match of features and form.

Nikon is looking to repeat the trick again with the Nikon D7100. Nikon has once again grouped together a host of features found across its DSLR stable and combined them with revisions, including the updated sensor, added video features and new auto-focus (AF) module among others.

On first impressions, Nikon has chosen to maintain the enthusiast DSLR template adopted in the D7000. The Nikon D7100 feels solid, with a blend of magnesium alloy and polycarbonate creating a hardy yet lightweight shell. While it might not be as sturdy as say, the Nikon D800, the body more than matches the D7100’s enthusiast billing.

New additions and modifications to the Nikon D7100 include a new ‘i’ button on the rear of the camera, along with the relocation of the video record button to the model’s top plate. The top plate itself is essentially the very same as that found on the Nikon D600, bar the microphones on the camera’s top plate. The mode dial and the drive mode dials have the same locking button mechanism as the D600 – it’s a useful way to stop them being accidentally rotated, but they’re a pain to use. 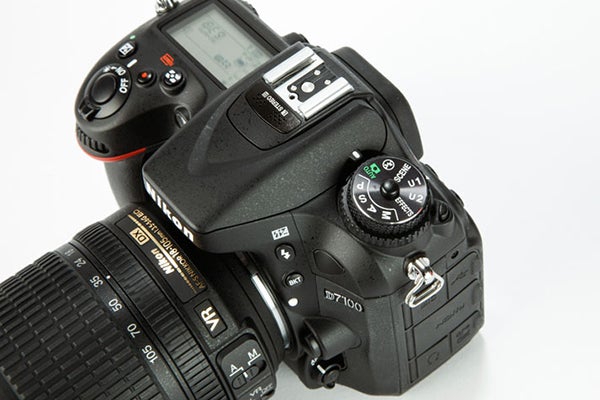 That small bug bear aside, however, the Nikon D7100 handles excellently.

At the core of the Nikon D7100 sits a DX-format sensor with a resolution of 24.1MP, much like the Nikon D5200, although it’s important to point out that the two sensors are not the same. The sensor found here sees Nikon omit the anti-aliasing filter with a view towards better detail retention, although there can be issues with false colour patterning as a result of the aforementioned absence.

The sensor itself has exactly the same ISO sensitivity range as that found on the Nikon D7100, running from ISO 100-6400 and extendable to ISO 25,600. The sensor also supports full HD video capture at a resolution of 1920 x 1080 at up to 30fps, or up to 60fps if you’re prepared to shoot at standard HD resolution of 720p. A pair of on-board microphones adds stereo sound support, and there’s a mic socket to fit an external one, too. 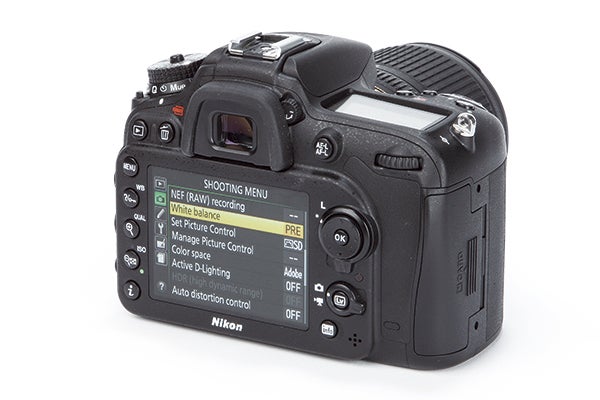 The camera applies a 1.5x crop factor to any attached lens – for example, a 50mm prime will turn in to a 75mm when attached. There’s also a 1.3x crop factor mode at a reduced 15.4MP (vs. 24.1MP native) for improved performance with attached lenses – with this mode active, said 50mm lens would behave like a 98mm optic, should you so wish.

Other new features include a new auto focus module, which has 51 AF points with 15 cross-type AF points – a boost from 39 and nine found in the D7000 – that promises to bring a better level of performance to the enthusiast. The Nikon D7100 also has the Expeed 3 imaging engine, the same as in the Nikon D4, which means it takes an impressive six frames per second.

There are a few completely new features that debut on the Nikon D7100, too. One of these is Spot White Balance, which lets you set the camera’s white balance for the whole scene from picking just one area of the scene. Another is the redesigned LCD screen that Nikon’s has been rolling out across its cameras of late, which the lacks the air gap found on previous models and promises clearer images.