The first soundbar to emerge from Samsung’s 2016 range is a mid-range multiroom-capable affair, designed and engineered at the Samsung Audio Lab in sunny California. It sits above the HW-K550, HW-K450 and HW-K360 in the lineup, and is available in two colours: black and silver (HW-K651).

The K models boast some fresh new features and tweaks but nothing radical, so you can expect the same impressive functionality, design and TV-boosting sound as its predecessor, the HW-J650. 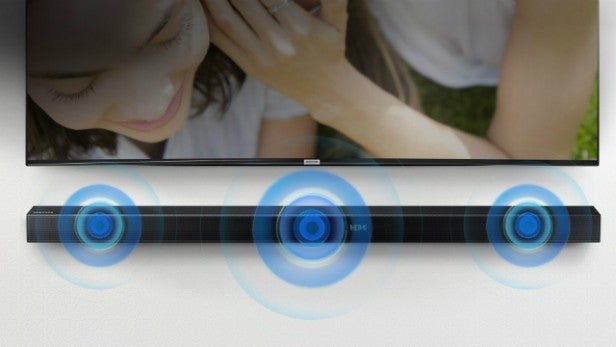 The HW-K650 boasts the same discreet design as last year’s models. It’s stylish and elegant, but like all good soundbars it doesn’t demand your attention. As you’d expect at this price, the design has a premium feel – most of the bar is encased in a sturdy aluminium mesh, which not only makes it feel solid and heavy, but also hides the six drivers running along the front edge.

Also hiding behind the mesh is a large LED display panel, a welcome feature on any soundbar. It means you can see inputs, volume levels and setup options clearly from the sofa, without having to get up or squint.

The glossy end-caps are a nice touch, one of which features volume, input and standby buttons. On the bottom are rubber pads that keep it secure on top of a TV stand. With a height of only 54mm, the HW-K650 lies nice and low on a flat surface, keeping clear of most TV remote sensors.

Connections include a HDMI input and ARC-enabled output, plus optical and 3.5mm mini-jack inputs. Two buttons – Speaker Add and Wi-Fi Setup – let you connect the soundbar to a multiroom system alongside other Samsung speakers. 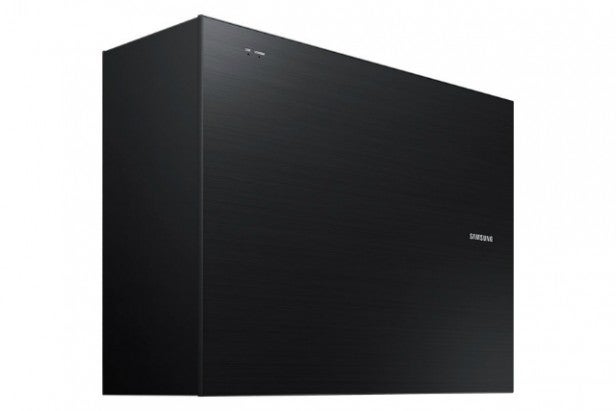 The wireless subwoofer is identical to last year’s models. The widest side faces forward, but thankfully its performance isn’t affected if you have to turn it sideways. Its appearance is low-key but tasteful, with a brushed-black front panel and gloss-black sides.

Samsung packs numerous features into its slender frame, the highlight being Wi-Fi and multiroom functionality. Using the Multiroom App on your smartphone, you can send music to the HW-K650 from a wide range of streaming services, including Spotify, Tidal, Amazon Music, Samsung Milk Music, Deezer, 7digital, 8tracks, JUKE, Murfie, Napster, Qobuz and TuneIn radio. You can also stream songs from DLNA devices such as PCs and NAS drives. The system supports MP3, WMA, AAC, WAV, OGG, FLAC and ALAC.

In addition, if you have other Samsung wireless speakers around the house, you can play music through all of them, or send different sources to each speaker. You can even use a pair of multiroom speakers to create a 5.1-channel system, with the 3.1 soundbar providing the front and centre channels.

Away from multiroom, the HW-K650 is a well-specced soundbar. Power output is quoted as 340W and there are six speakers on board, each one driven by its own amplifier and active crossover. 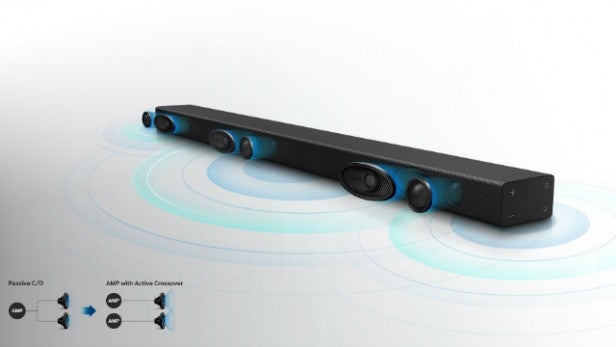 Built-in Bluetooth not only lets you stream music from mobile devices but also lets you play audio wirelessly from compatible Samsung TVs.

The two HDMI sockets are housed in a cramped recess on the bottom, which makes it a little tricky to fit the cables, but the grooves on the back keep the wires tidy.

ARC and Bluetooth worked harmoniously with my Samsung UE55KS9000 TV, but it’s more complicated to set up than simply hooking up your TV to the optical input. Nevertheless, it’s nice to have the option.

There’s no auto-calibration system, but it didn’t take long to manually optimise bass, treble and subwoofer levels for my room.

The Samsung ships with a simple, well-designed handset. It’s slim and ergonomic, with buttons shaped into icons to help you identify them. It’s a fairly sparse layout, but there are dedicated buttons to adjust the bass, treble and subwoofer levels, or toggle through sound modes. Adding the HW-K650 to your network is simple, but you’ll need to download Samsung’s Multiroom App first. After pressing the Spk Add button on the bottom, the app found the soundbar quickly and shared the Wi-Fi settings from my other Samsung multiroom speakers.

The Multiroom App is attractive and intuitive. You don’t have to search through multiple menus to find your music – everything is accessed from the main screen. Carefully arranged dropdown menus bring up the playback queue, music sources and the current album or playlist.

Presentation is gorgeous. Cover art becomes the background wallpaper, song titles scroll across the screen, and a cool virtual jog-dial skips tracks with a swipe of the finger. 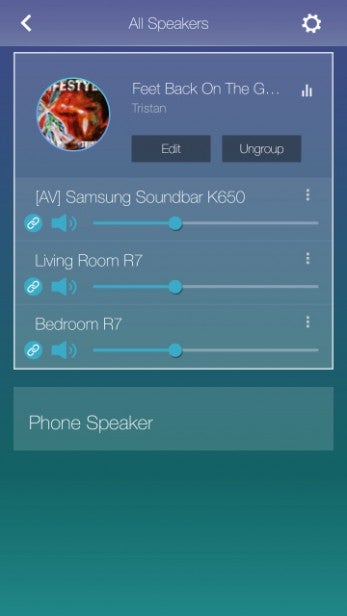 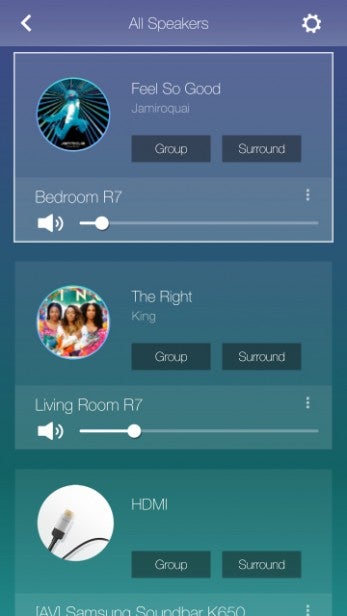 Multiroom playback is easy too. Switch to the speaker list, tap the one you want and play your chosen source. A little speaker icon on the Now Playing screen quickly switches playback to a different speaker.

If you want to play the same thing through them all, just tap the Group button and choose the speakers you want to include. Tapping the Surround button lets you organise a 5.1 setup by dragging the speaker icons into the relevant positions.

The only problem I encountered – and it’s a very frustrating one – is that the app wouldn’t let me scroll quickly through the music library on my NAS drive. Try scrolling quickly and it pauses after every swipe as it loads the next batch of tracks or albums. The search tool doesn’t work very well with NAS drives either.

The HW-K650 turns in a highly entertaining performance. The soundbar and sub team up to deliver a crisp and energetic sound, with impressive depth and scale. Its loud, powerful presentation easily outperforms any TV speakers, and it doesn’t have any trouble filling an average-sized living room when you push the volume. It could be more detailed and nuanced perhaps, but there’s slightly more control and clarity than Samsung’s previous soundbars.

Its talents are obvious when playing Ant-Man on Blu-ray, fed into the HDMI port from my OPPO deck. As Ant-Man fights Yellow Jacket on the kid’s train set, the exploding toys have a crisp, biting edge, fused with punchy bass from the sub. When the giant Thomas the Tank Engine smashes onto the police car, the crunching metal effect is forceful and there’s a clear glassy tinkle as the windscreens smash.

All this vigour lends ample drama and excitement to action scenes. There’s also a decent amount of detail, demonstrated by the tiny chatter of ants and buzzing wings.

The subwoofer does a fine job too, supplying a mighty rumble as an army of ants charges across the floor. And when Scott blows open the safe towards the start, the explosion has impressive slam and impact. It could be a little tighter and subtler, sounding a little heavy-handed with smaller, more precise bass details, but casual listeners should be more than happy.

A bigger issue is the HW-K650’s lack of refinement and nuance in the upper frequencies. The attacking top-end and mids are clearly tuned to deliver maximum impact, but it can seem slightly aggressive and glosses over finer sonic details. Soundbars such as the Q Acoustics M4 or the Arcam Solo Bar bring a little more silk and subtlety to the table.

However, the Samsung is fantastic for TV viewing. Watching an episode of Pointless on BBC 1, the musical stings between rounds are remarkably big and punchy, while the theme tune really commands your attention.

And thanks to the dedicated centre, Alexander Armstrong’s voice is clear and prominent, easily maintaining its audibility over the hubbub of a busy living room. It’s also underpinned by a subtle layer of bass.

Don’t be tempted to use the nasal-sounding Clear Voice mode, however – speech is just fine through the Standard preset. Movie mode delivers the most satisfying balance, beefing up the bass and filling out the soundstage, but the others presets aren’t worth bothering with. Surround Sound gently spreads the width without compromising clarity or organisation, but I wouldn’t describe it as immersive. 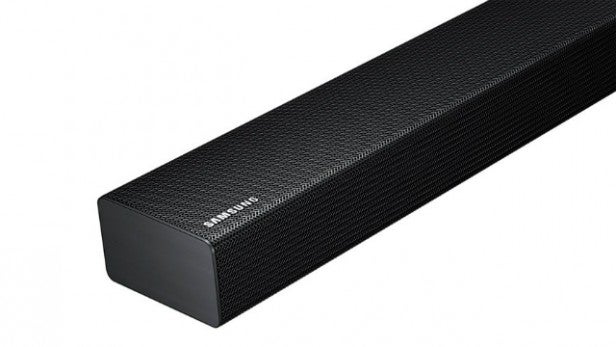 Provided you accept its sonic limitations, the HW-K650 is definitely worth a place on your soundbar shopping list. Its exciting, room-filling sound, plentiful features and stylish, discreet design more than justify the asking price.

Not only is it a fine audio upgrade for your TV, but it’s also a versatile multiroom speaker. Using Samsung’s attractive Multiroom App, you can stream music from a vast range of services and DLNA devices without hassle – give or take one or two niggles – and beam it to other speakers around the house.

In terms of performance, it isn’t the most refined or subtle soundbar I’ve heard and the subwoofer has its flaws, but what the HW-K650 lacks in sonic finesse it makes up for in sheer enthusiasm.

Not the most accomplished performer in its class, but Samsung’s stylish soundbar offers a big, exciting sound, generous features and easy multiroom streaming – plus it’s terrific for TV viewing.