After testing three of Samsung’s curved soundbars (the HW-J6500, HW-J7500 and HW-J8500), I’m getting back on the straight and narrow with the HW-J650 – a mid-range soundbar conceived for conventional flat TVs.

It’s a cheaper proposition than the curved models, but comes equipped with the same impressive range of features, including multiroom compatibility, Bluetooth and a wireless subwoofer. 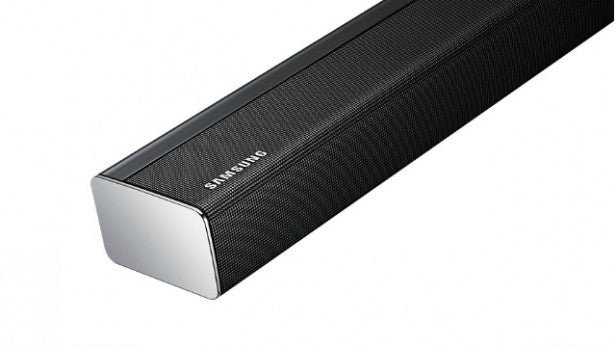 Adorned in black with snazzy chrome end-caps and rounded edges, the HW-J650 cuts a fine figure in front of any TV. An aluminium grille covers the vast majority of the enclosure, with a brushed black strip on top housing a row of touch-sensitive controls: volume, input selection and standby. Build quality is up to scratch thanks to the heavy, rigid enclosure. 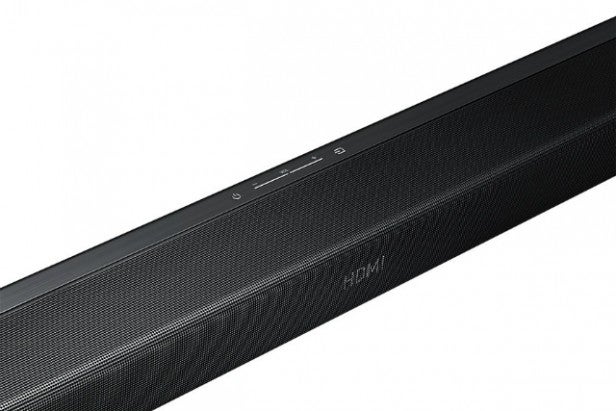 The 51mm-high bar sits nice and low on my TV stand, filling the empty space beneath the screen and avoiding the remote sensor. The compact dimensions and minimal styling make it a clutterphobe’s dream, especially if your TV is wall-mounted, since you can hang it below the screen using the supplied brackets. Its 1,060mm width makes it a good match for TVs up to 55in.

Rear connections are built into two opposing recesses. A single HDMI input and 3.5mm mini-jack are mirrored on the opposite side by an ARC-compatible HDMI output and optical input. Outward-facing Ethernet and USB ports complete the lineup. Another HDMI input would have been welcome, but it’s not a bad selection.

On the wireless side, there’s built-in Wi-Fi and Bluetooth. Two buttons on the back help you connect the bar to a router and join a Samsung multiroom system if you’re using a Hub. TV SoundConnect support allows compatible Samsung sets to beam audio to the soundbar over the Bluetooth connection. 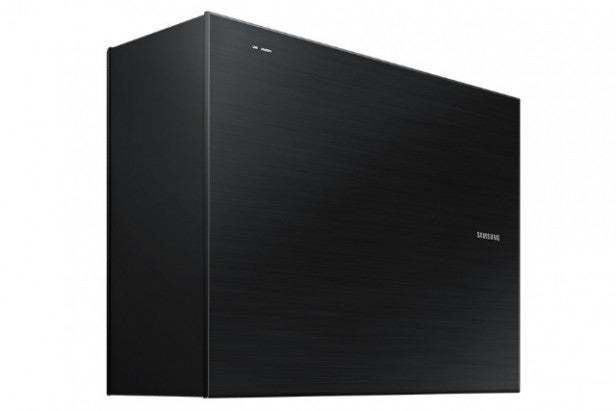 The subwoofer takes an unusual design approach. It’s designed to be placed with the widest side facing forward, but if that doesn’t suit your layout then you can turn it sideways without greatly affecting performance. It sports a classy, minimal styling, with gloss-black sides, a brushed front panel and cloth covering the 7-inch woofer on the back. A small blue light on the front indicates successful pairing with the soundbar.

The HW-J650 is a 4.1-channel system, offering a total power output of 320W (40W per channel and 160W from the sub). There’s built-in Dolby Digital 5.1 and DTS 2.0 decoding, plus a virtual surround mode that expands soundstage width. It’s joined by a range of audio presets – Standard, Music, Voice, Sports, Cinema and Night.

You can play music from USB storage devices. Supported formats include MP3, WMA, OGG and AAC, plus hi-res FLAC, ALAC, AIFF and WAV files with a sample rate no higher than 192kHz.

Multiroom compatibility is another alluring feature. Using Samsung’s Multiroom smartphone app, you can play music from DLNA devices, online streaming services or the phone itself. You can also control the soundbar’s volume, adjust the EQ and group it with other Samsung speakers – such as the R7 – and play the same songs throughout the house.

Setting up the HW-J650 is a piece of cake. If you don’t have TV SoundConnect, the next simplest connection method is to run an optical cable between your TV and the soundbar; running your Blu-ray deck through the HDMI ports is hardly rocket science.

ARC setup involves a little more brain power, as you have to delve into your TV’s CEC settings and wait for all your devices to talk to each other. However, I had no problems making it work. What’s more, the subwoofer pairs automatically with the soundbar and Bluetooth pairing is a hassle-free process.

In the box is a slim, ergonomic remote with a tactile dappled finish. The sensibly placed buttons are shaped into familiar icons, while the audio mode controls are clustered together neatly at the bottom.

Smartphone owners can use Samsung’s Multiroom app instead. As noted in our reviews of the R7 and R5 wireless speakers, this app is a joy to use. The funky colour schemes, fonts and flash graphics give an air of sophistication, but it’s not style over substance – everything works beautifully.

I had no trouble connecting the HW-J650 to the system. After holding down the Wi-Fi button on the back, the app found the soundbar practically straight away. 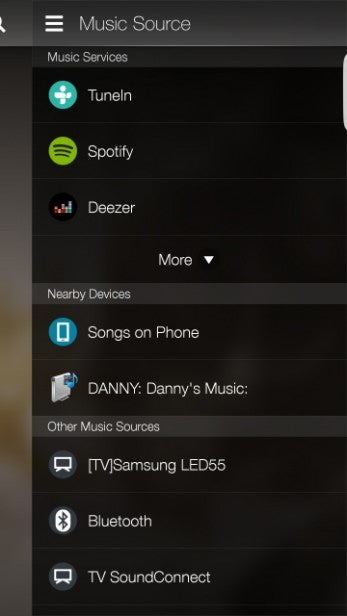 Once connected, everything you need is accessed from the very first screen, including the playback queue (which is easy to edit on the fly) and the list of music sources (which slides in from the right-hand side of the screen).

During playback, the track name and artist are displayed at the top, with a virtual jog dial in the middle of the screen that lets you skip tracks with a swipe of a finger. Playback controls and a volume slider are found at the bottom. 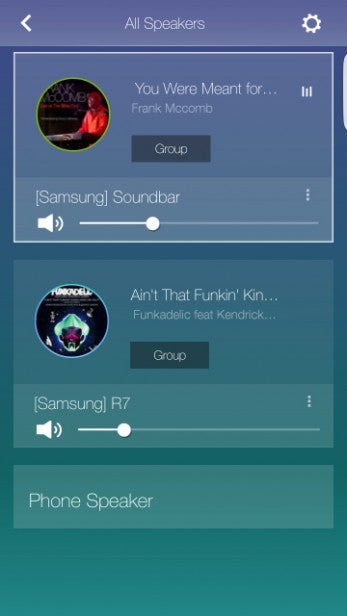 If you want to play about with the multiroom settings, tap the speaker icon at the top of the screen. Each speaker in the system is displayed in a box with a volume slider and a small setup menu – here you can edit the name to make them easier to identify, or tweak the equaliser.

To group speakers together, tap the Group button, select the ones you want and they merge into one box. You can adjust the volume for individual speakers, or link them together and adjust it universally. 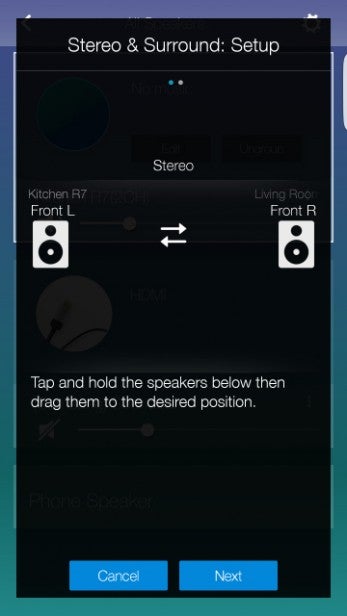 Other Samsung multiroom speakers such as the R1 or R7 can be used as surround channels. When the app detects more than two speakers in the system, a “Surround” button appears – tap it and the subsequent menu lets you drag speakers into the appropriate positions. It’s easy, versatile and very cool.

Playing Return of the Jedi on Blu-ray, the HW-J650’s performance isn’t quite out of this world but it does a stellar job. Its Force-ful, bass-heavy sound is light years ahead of any TV, but a few flaws mean it’s still eclipsed by the best soundbars at this price point.

There’s a lot to celebrate about the Samsung’s performance, though. John Williams’ iconic theme is wonderfully clear and incisive, the familiar brass melody filling the room. It’s a powerful intro and the Samsung keeps all the drama and grandeur intact.

Further into the film, the impressive subwoofer lends Jabba’s voice a deep rumble that helps convey the slug’s size and heft. When the Death Star blows up at the end of the film, the explosion is suitably big and powerful. It’s reasonably well integrated, but can be a little boomy without proper placement and adjustment. It also lacks the absolute tightness and detail of a dedicated subwoofer.

The bar’s attacking tone gives everything a nice level of dynamism and excitement, even at lower volumes. You can hear bangs and crashes clearly and the lightsaber battles crackle and fizz with energy. This power and bass gives scenes a decent sense of scale.

I wouldn’t describe the Samsung’s high frequencies as silky, but there’s a nice openness to the sound and decent detail. On Dagobah, you can clearly make out distant creatures calling out as Luke talks to Obi-Wan, while the gentle rustle of Ewok footsteps on the forest floor is clear.

Voices are intelligible and contain an impressive amount of texture. Dialogue is centred to the screen too, making it all the more convincing. 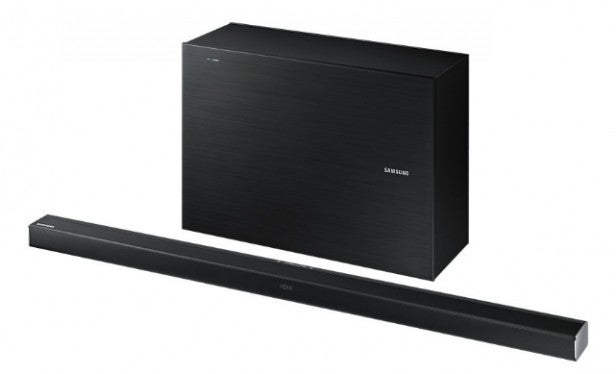 Despite the lack of actual surround speakers, the HW-J650’s sound is surprisingly immersive. The side drivers do a great job of spreading the sound, while the surround processing sends lasers and spaceships into orbit around my TV. But what you won’t get is a 360-degree soundstage with effects placed behind you – for that you’ll need to invest in a pair of Samsung’s multiroom speakers.

On the negative side, the soundbar over-emphasises high frequencies and lacks composure when it counts. Salacious Crumb’s high-pitched cackle and other screeching beasts can sound shrill and spiky if you push the volume too loud.

The soundbar’s lack of bass depth also poses a problem. The subwoofer is supposed to fill in the bottom end, but with nothing to cling onto it loses cohesion – one of the reasons for the booming mentioned above.

Still, if you don’t get too analytical then the HW-J650 is a lot of fun. As well as adding drama and scale to movies, it also makes TV shows more compelling than ever. From the extra bass punch in the EastEnders title music to the rumble of the crowd during football matches, the Samsung will shed new light on content you’ve been watching for years. It’s worth having a play with the sound modes, but I found Standard to be the most effective for TV, movies and music.

When used as part of a multiroom hi-fi system, the HW-J650 does a fine job. The treble-heavy sound works better for music than movies, drawing out expressive detail and lending a sense of space. Stereo separation and imaging are better than expected, and the agile subwoofer does a good job of keeping up with drums and basslines. 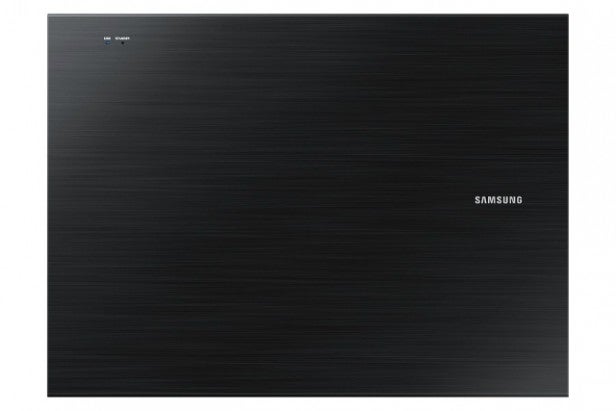 There are more sonically satisfying soundbars on the market, but with a healthy feature list, attractive design and powerful performance, the HW-J650 still deserves a place on your shortlist.

Its slim, elegant design blends harmoniously with most TVs, while the wireless sub gives you flexibility when installing. Connections are generous, and multiroom compatibility lets you control the soundbar with other wireless Samsung speakers using the slick, versatile smartphone app. Hi-res music support, Bluetooth and a wide range of music streaming services are the icing on the cake.

As for the negatives, sub/soundbar integration could be better and it loses composure at loud volumes – issues that you don’t get from the Q Acoustics M4 and Philips Fidelio B5 – but there’s still enough detail, power and scale here to put any TV to shame.

The HW-J650 is a solid multiroom soundbar with a healthy feature list, classy design and powerful performance. However, it lacks the sonic composure and cohesion to trouble the best at this price point