The Samsung HW-F850 (or AirTrack) is a 2.1-channel soundbar and wireless subwoofer designed to accompany TVs of 55-inch and over. It’s a premium product with a premium price tag to match, but hopefully the feature list and design can live up to it. Key features include a built-in valve amp – previously found on the Samsung HT-F9750W and HT-F6500 systems – Bluetooth connectivity and a
3D Sound mode. So if you’ve got a big TV and a big budget but don’t
fancy the clutter that comes with a full 5.1 system, the HW-F850 could
be the ideal alternative.

The HW-F850’s soundbar can be mounted upright on the wall or laid down on a flat surface. The Installation Position Sensor automatically detects which way up it’s facing and re-configures the sound output accordingly.

When you lay it flat, an OLED display appears on the thin edge at the front, but when wall-mounted a different display appears in the speaker mesh to the left of the touch-sensitive control panel. It’s a stunning touch, guaranteed to bring a smile to your face while setting up. 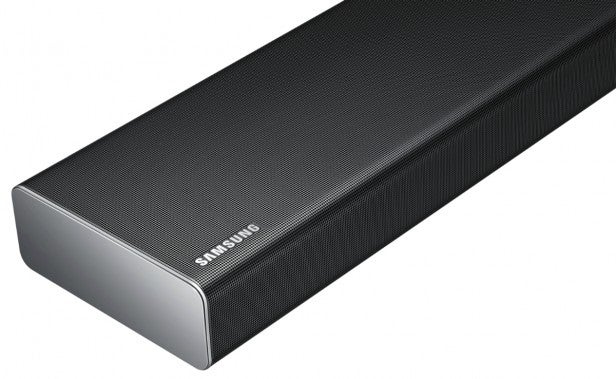 Overall, the HW-F850 is a beautifully made soundbar, fashioned from sturdy aluminium mesh and gorgeous mirrored panels at both ends. It’s weighty and robust, easily justifying the price tag in terms of build quality. The styling is actually quite subdued – when mounted on the wall, all you can see from the sofa is a small window showing off the red valves and illuminated controls, while the OLED display only appears when you press a button. The black finish blends nicely with most Samsung TVs.

Given the slim, sleek design of the soundbar, the subwoofer’s large dimensions come as a surprise. But thankfully Samsung has styled it with similar panache – the gloss-black finish and brush-effect top panel don’t really deserve to be hidden away. On top is a blue LED indicator, but there are no controls as its performance is governed by the soundbar. 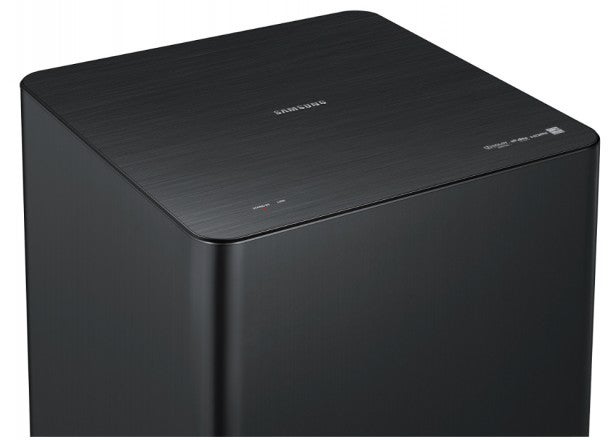 On the back/underside of the soundbar is a recess that sports an HDMI input and output, allowing you to pass 3D video signals to your TV from a Blu-ray deck. Naturally the output is ARC compatible, which means you don’t need to rig up a separate digital cable to listen to TV audio. Great – but at this price we’d have expected a second HDMI input, the lack of which could cause issues if you have several sources to connect.

Joining the HDMIs is an optical digital input, a 3.5mm minijack input and a port for the supplied ASC microphone, which automatically optimises the system’s sound quality.  There’s also a USB port that lets you play MP3, WMA, AAC, WAV, OGG and FLAC files stored on flash drives.

All of the sockets except USB are mounted sideways within the recess and there’s a groove in the back that allows cables to poke through when laid on a tabletop. 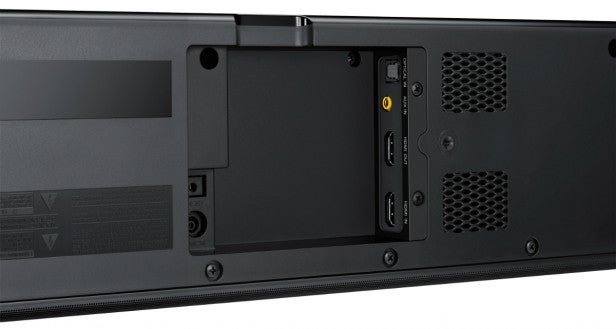 It’s also equipped with Bluetooth for easy music streaming from mobile devices and for playing audio from SoundShare-compatible Samsung TVs. It also supports NFC (Near Field Communication), which pairs compatible Android devices simply by tapping them on the NFC panel on the right hand side of the unit.

The HW-F850 also decodes Dolby Digital and DTS, but not Dolby True HD or DTS HD Master Audio (multichannel PCM is supported). As for sound processing, 3D Sound Plus ‘synchronises the sound to match the motion and depth of the image’ it says here, while Vertical Surround projects sound upward to give the soundstage a sense of height.

There are seven sound presets (Music, News, Drama, Cinema, Sports, Game and Standard), each one EQ’d to complement their respective genres, while Standard mode leaves the sound alone.