The Samsung HT-F9750W is the company’s flagship home cinema system. It features a swanky premium design and virtually every feature under the sun – including wireless rear speakers and the company’s valve amp technology. 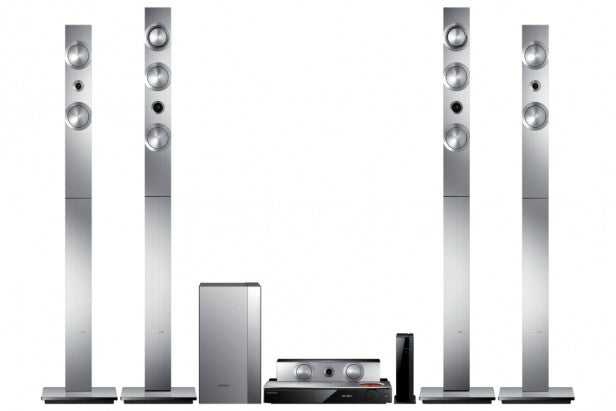 This is Samsung really pushing the boat out, but such a jaw-dropping spec doesn’t come cheap. At around £1,500, it’s more than double the price of LG’s BH9430PW and Panasonic’s flagship SC-BTT880. Let’s find out if the HT-F9750W has the quality to justify it…

Once you’ve pieced together the myriad parts, the Samsung HT-F9750W is a formidable looking system. All of the components are styled in a classy combo of brushed silver and gloss black.

The front and rear tower speakers come in three separate parts, and when erected they stand 1302mm tall, making them an imposing-yet-stylish presence. The metallic finish on the front contrasts nicely with the gloss black side panels, while the exposed drivers look slightly space-age. They sit on chunky square bases with a hole in the bottom that allows you to feed the cables through.

The Samsung HT-F9750W’s front towers differ slightly from the rears as they’re equipped with extra swivel speaker drivers at the top, all part of the system’s vertical surround feature – more on that later. But these drivers are fed with their own separate channel, which makes this a 7.1 system even though there are just five speakers.

Although the speakers’ build quality is a cut above your average all-in-one system, there’s still a whiff of budget-ness about them – the cabinets feel plasticky and hollow compared with dedicated floorstanding speakers, and they’re easy to rock when assembled – although it’s hard to fully knock one over. 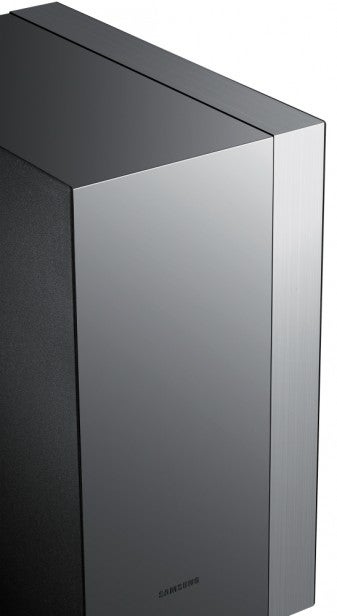 The passive subwoofer shares this faintly budget feel but looks stylish in its glossy grey finish, brushed silver strip and black cloth on the side. The centre speaker is elongated to make it fit comfortably on a TV stand or cabinet, and again looks classy. 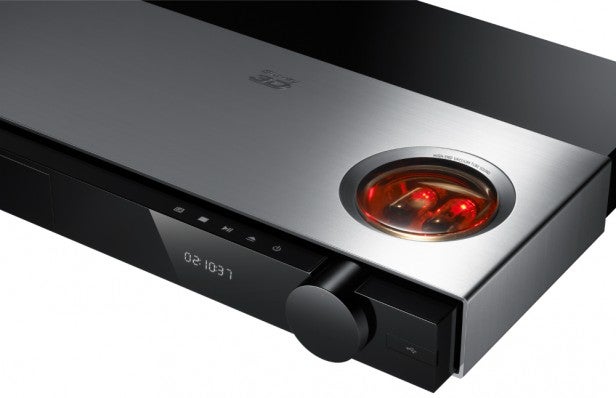 The Blu-ray receiver is styled in a similar fashion to the BD-F7500, Samsung’s top-end Blu-ray player. A gloss black main section is encased in a brushed silver sleeve – giving it a more robust and luxurious feel than the company’s cheaper systems – embedded into which is a window showing off the glowing vacuum tubes.

The front panel houses a huge volume dial, an LED display and a USB port hidden under a dust cover – that’s for playing back media files from pen drives. On top you’ll find a row of touch-sensitive controls.

On the back is a generous array of sockets, headlined by an ARC-compatible HDMI output and two inputs, allowing you to listen to your other sources through the system.

They’re joined by optical digital and analogue audio inputs, an Ethernet port and an aerial input for the FM radio. The speaker connections are colour-coded plugs, with special double plugs for the front cables that feed the main speaker and top driver separately.