Unusually for a soundbar, the HW-F850 features automatic calibration, more commonly found on AV receivers and 5.1 systems. But it’s a welcome inclusion, making life easy for anyone who doesn’t fancy dabbling with the manual audio adjustments.

Connect the supplied ASC (Auto Sound Calibration) to the unit and the soundbar measures the distance to the listening position using a series of test tones, after which it sets the appropriate volume and EQ for each channel. It only takes about two minutes to complete, and we had no problems with the results.

But if the sound requires further tweaking you can adjust bass, treble and midrange levels by pressing the Tone button, plus there are dedicated Audio Sync and subwoofer levels controls on the remote.

Pleasingly, the remote is backlit, which means no more fumbling about in the dark for the pause button. Like Samsung’s Blu-ray and TV remotes, it sports large, rubbery buttons, clear labelling and a layout that lets you navigate instinctively.

Keys at the top provide direct access to every source and sound mode, while controls for Samsung TVs are discreetly blended in with the other buttons. 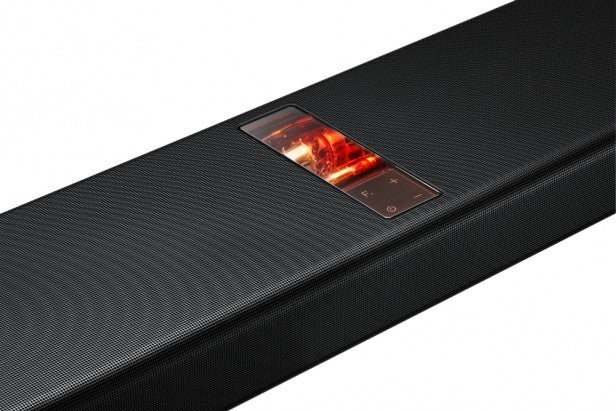 Listening to the HW-F850 is an absolute treat. Both movies and music sound smooth and luxurious, with pleasing levels of warmth, detail clarity and bass clout. It’s perhaps not quite up to the quality of the B&W Panorama 2 or Monitor Audio ASB-2, but knocks any budget bar into a cocked hat.

We started by streaming a 320k MP3 rip of Carl Hudson’s Zoology For Martians via Bluetooth (in the Standard setting) and marvelled at the warmth and fluidity of the Rhodes keyboards, the snappy, full-bodied drums and agile funk basslines. You can feel the valve amp injecting depth and substance into the sound.

There’s tautness and precision to the sub’s low frequencies, which when combined with the crisp high-frequencies and clean mids makes the Samsung a surprisingly musical performer for a soundbar. Switch to the Music preset and the sound opens up even more, but we’d recommend leaving 3D Sound Plus alone for music playback as the sound loses focus.

Movie performance is also terrific. With our TV connected to the Samsung’s optical input, we played The Hobbit on Blu-ray and were blown away by its big, powerful soundstage, bolstered by muscular bass from the sub that fuses seamlessly with the soundbar.

It lives up to Samsung’s promise of room-filling sound, pumping out the movie’s spectacular soundtrack with a convincing sense of scale, before the volume has even reached fifty percent of its maximum.

When Bilbo and the dwarves attempt to rescue their horses from the trolls, the scene is reproduced with admirable power and dexterity right across the frequency range. The trolls’ dialogue has palpable depth, while the rustle of their footsteps on the woodland floor is crisp.

In the ensuing skirmish, the melee of shouting dwarves, clanking swords and neighing horses is skilfully organised, with every effect emerging cleanly from the speakers. It’s exciting and dramatic, propelled along by the pounding score. Dialogue remains suitably prominent amid the carnage.

3D Sound Plus brings a subtle but significant improvement to the sense of width and space. As Gandalf and company trudge through the rain on horseback, the sound of hissing rain feels like it’s hovering somewhere above the soundbar.

It opens up the sound and makes you feel a little more involved, unlike the more contained Standard mode. We’re not saying it’s any sort of substitute for proper surround sound – it still feels like everything’s coming from that box over by the TV – but it definitely breathes life into the soundstage. 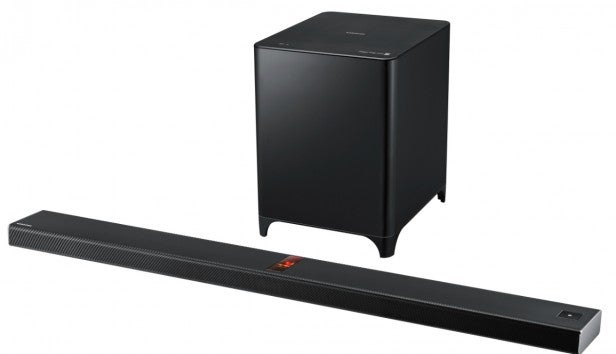 The Samsung HW-F850 is a fantastic soundbar, boasting luxurious build quality, a clever dual-position design and a generous range of features. But what really seals the deal is its fabulous sound quality, which brings power and polish to both movies and music.

The only downside is the price – £900 is a significant outlay, the sort of money that most people would expect to pay for a decent separates system. Chuck in another £100 and you could step up to the Monitor Audio ASB-2, which offers even better sound quality and throws in AirPlay for good measure.

But that aside the HW-F850 is a thoroughly impressive soundbar that’s ideal for owners of massive TVs who want a simple way of taking sound quality to the next level.

It’s expensive, but that money gets you a sumptuous soundbar with killer sound quality