The Samsung Gear Live runs on Android 4.4W, which will create a universal software experience. So for now that means there’s no skinning or overlays to clutter the already clean, slick Google Now-inspired user interface across all smartwatches.

It’s the same scenario setting everything up as it is with the G Watch. Downloading the free Android Wear app to your compatible smartphone is the first task and is where you can sync the Gear Live to customize notification settings and browse compatible apps. Again, this is done over Bluetooth 4.0 Low Energy and when you lose connection to your smartphone, you also lose access to Android Wear’s core features

One element Samsung does have control over on the software front are the watch faces you can choose from. There are 12 to choose from, but we struggled to find one we actually liked. The time displays are generally too small and don’t take full advantage of the screen space. Thankfully, Google has announced it will be introducing a custom watch face API and for early adopters. On this evidence, it can’t come soon enough. 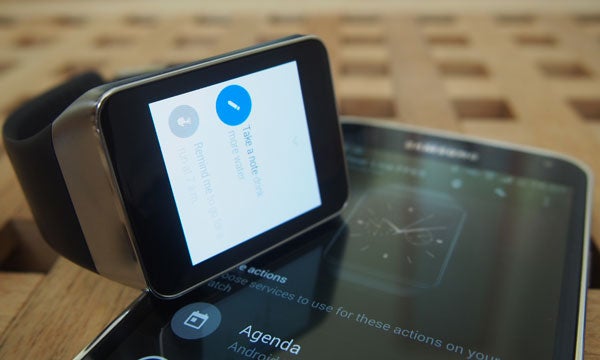 There are three core elements that currently make up how Android Wear works: Google Now, Google Voice and notifications.

Google Now is where you receive contextual notifications just like you do on the phone version based on location data and search history. Whichever data cards you select on the phone should in theory get pulled into the Gear Live.

In our time with the Live, weather updates appear to be a permanent fixture, while notification cards based on our commute and calendar appointments came through in a steady and in no way intrusive stream throughout the day. Disappointingly, news stories based on search and the places nearby cards never appeared despite being selected and it’s not really clear why they don’t make an appearance.

Next up is Google Voice search, which is the means by which you access more or less every feature in Android Wear. It treats each request in entirely the same way as finding something through the Google search engine on your computer. Double tapping on the watch face screen only or saying, ‘OK Google’ activates Voice Search providing examples of the types of things you can ask the Gear Live. 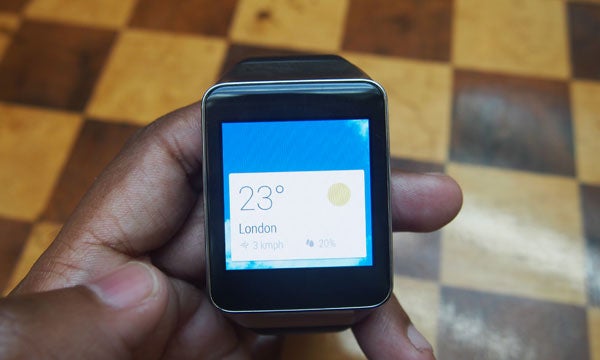 Unlike the G Watch, the microphone on the Gear Live is placed on the side of the watch, and it clearly affects the accuracy of the voice recognition. For launching apps or asking for directions it isn’t really a problem, although simply asking it to ‘search for ambient lights’ came out as ‘are you made’.

One other issue is that it can be too easy to dictate an incorrect text message and send it before you’ve had a chance to review it. At times, before you have even had a chance to speak to the smartwatch, it’s has dropped down to the example commands. It’s largely a positive experience with Voice Search, however better positioning of the microphone and the ability to review actions is something that needs to be addressed.

The final core features is notifications or what Google calls ‘Bridge’ notifications. This is essentially bringing the functionality of the drop-down notification bar from your Android smartphone onto your smartwatch. Pretty much any notification you see there should be present whether that’s Facebook, Twitter or in our case updates on our Jawbone 24UP updates. This also works for receiving phone calls, text messages or emails.

Acting on these notifications entirely depends on the app or the phone feature. For a tweet, you can read it but to reply you still need to go back to your phone. When a call comes through on your phone you’ll be able to reject or accept, at which point you need to back to your phone. Emails through Gmail will let you reply, but only through voice search. It’s a notification system that works better for some things and others not so much.

What’s more of a problem is the ability to accidentally dismiss notifications before properly dealing with them. A prime example of this was receiving a Facebook friend request and accidentally rejecting it without having an opportunity to recall it. This is the same problem with Voice Search. The ability to deal with things quickly isn’t always beneficial.

The core of Android Wear works, it’s just some of the finer points like navigating the user interface and the lack of the ability to recall cards are some of the most notable problems. Other than that, Google Now, Voice Search and the notifications system look set to be the foundations for this operating system to really flourish. 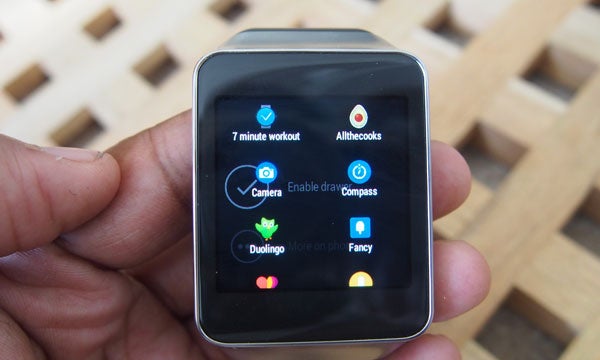 Like any new operating system, apps are going to be vital and with Android Wear it should be no different. Searching through the Android Wear app on your phone is the best way to find 30 or so high profile apps, but a quick search in the Google Play Store shows that there is a steady stream of apps from smaller developers on the way.

Android Wear also includes a handful of native applications already pre-installed, which include a Compass, Google Fit and a Heart Rate app specifically for the Gear Live to record data from the heart rate sensor. When you download them to your smartphone they should appear directly on the Gear Live, but on a few occassions that wasn’t the case.

Re-syncing the apps within the Android Wear app didn’t solve the problem and they didn’t appear until we restarted the smartwatch by holding down the button on the side. Locating the apps is an issue as well as you need to delve into the bottom of Google Voice Search to launch them. You can alternatively launch them via Google Voice Search, however we preferred the less awkward option.

It’s a relatively a small batch but it offers a nice variety and gives you an idea of how different apps will be able to utilize Android Wear as a platform. There’s a golf GPS tracker, the ability to use Android Wear to board flights, find local gigs and even get reminders to take your medication.

Some utilize Android Wear better than others. Runtastic, Duolingo, Tinder and recipe app AllTheCooks are all good examples how Android apps can use the smaller screen in clever ways and don’t feel like a lazily ported app. The flip side is that some apps, like The Guardian and Thomson Reuters Eikon, are sluggish and deliver infrequent updates.

Developers are also making apps to address some of the issues with Android Wear, like the heavy reliance on Google Voice Search. Apps like Wear Mini launcher (pictured above) brings a more familiar app drawer while Wear Volume adds virtual volume controls making it easier to control first and third party music applications.

Even though Google Play is not currently brimming with Android Wear apps, there’s enough on show to suggest extending Android to the wrist does have potential and could stop you from constantly reaching for the smartphone.