The Galaxy Tab 4 Education is Samsung’s new classroom-focused tablet, which it hopes will inspire the next generation to work better, faster and smarter. Revealed at the BETT 2015 education conference, we played around with the 10.1-inch slate, and we reckon it could become rather popular with classmates and teachers alike.

You can instantly tell it’s been manufactured by Samsung. The Galaxy Tab 4 Education features the same shape, curved corners and general lack of va-va-voom as pretty much any other Galaxy-branded tablet. The front face is plastic, and is attached to the leather-look rear with a shiny metal rim, which encases the entire unit.

It’s a neat, tried-and-tested formula, but just looks a little boring. Why Samsung seems so intent on making its products look so ordinary is beyond us, but fortunately the classroom doesn’t exactly cry out for a sprinkling of glam. 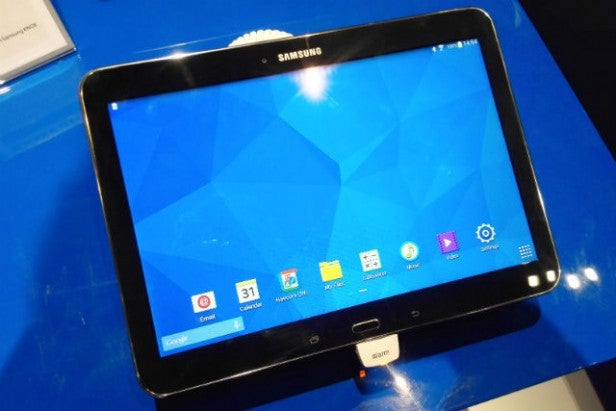 At 243.4 x 176.4 x 7.95mm and 490g, the Tab 4 Education is nice and sleek and should be comfortable in all students’ hands, whether tiny or dustbin-lid-sized. By applying a good amount of pressure, you can just about bend it, but it’ll stand up to everyday wear and tear.

However, school gadgets need to be able to survive more than a little rough treatment. You could have found me smashing footballs and launching books across classrooms just a few years ago, with little regard for any damage that might be caused. Any OHPs and battered old keyboards in the vicinity rarely stood a chance against the onslaught. For this reason, Samsung has decided to bundle the Tab 4 Education with a protective case.

We unfortunately didn’t get the chance to play with the case, but it looks like a tough, rugged number. It’s made of silicone and Samsung says it’s built to protect the tablet from shocks and impacts, but it’s also chunky, and will definitely add a great deal of bulk to proceedings.

While it completely covers all four of the Tab 4 Education’s corners, it features cutouts for all of the tablet’s physical buttons and ports, including power and volume controls, a microSD slot, the charging port, a headphone jack, Micro USB 2.0 and HDMI. Dual speakers lie on the left and right sides. 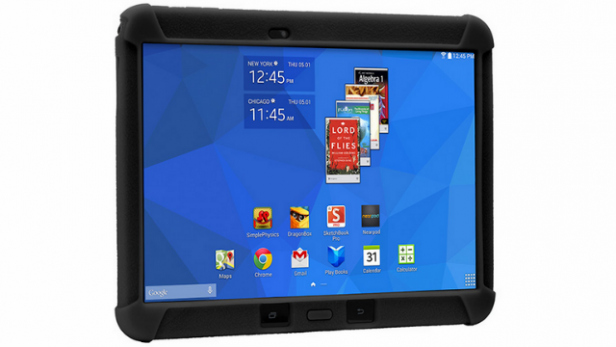 The display is a 10.1-inch 1280 x 800 LCD offering, which looks adequate but unremarkable in the flesh. While the viewing angles are impressive, we weren’t so pleased with black levels, which looked really poor. Brightness levels are good, though, and we reckon the Tab 4 Education won’t have too much trouble coping with outdoor use during those balmy Trinity term months.

Gorilla Glass coats the display, which Samsung hopes will prove teenager-proof. We didn’t get to bash the tablet around during our time with it, but found that it was prone to picking up great big greasy fingerprints, which made the screen look really grubby.

The Galaxy Tab 4 Education unsurprisingly runs Android 4.4 KitKat, and Samsung has made a big deal of the role it says Google Play for Education will play in its success.

The company says that the online marketplace will allow teachers to download their choice of a wide range of educational apps. Crucially, these apps are reassignable – meaning that teachers will be able to distribute the software to a class of students, gather it up at the end of a lesson and then distribute it to another class, all without extra charges. 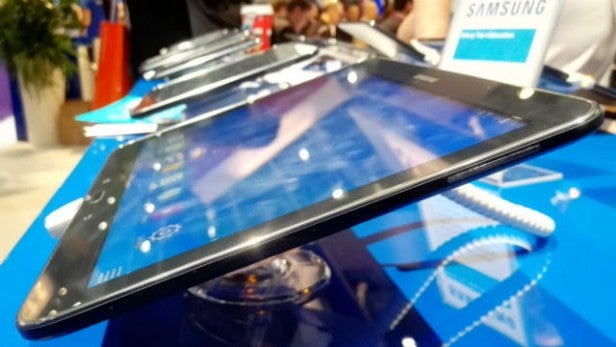 Samsung says that teachers will be able to do this via NFC “in minutes, rather than hours”. While we’re all for the speed and convenience of NFC, we’re not sure that the distribution of lesson materials ever took more than a few moments. Play for Education also allows the purchase of apps through a school Purchase Order, which rather handily cuts out the need for getting out your credit card every day.

Google Drive, the cloud-based office suite which enables real-time collaboration on a wide range of work documents, is also key, according to Samsung.

What we’re sure will be a hit is the Tab 4 Education’s multi-window capability. It allows you to view and interact with two completely different apps at the same time, as long as they’re compatible with the feature.

There’s a 3-megapixel camera and a 1.3-megapixel selfie-snapper on offer, but we’re not really sure their use will be encouraged too much in the classroom. While they’re unable to capture high-quality images, they’re good enough for casual use, and will no doubt give classmates a few good opportunities to rib each other. Flash and HDR mode are notable omissions, but we can’t imagine low-light photography featuring too heavily on the typical school syllabus. 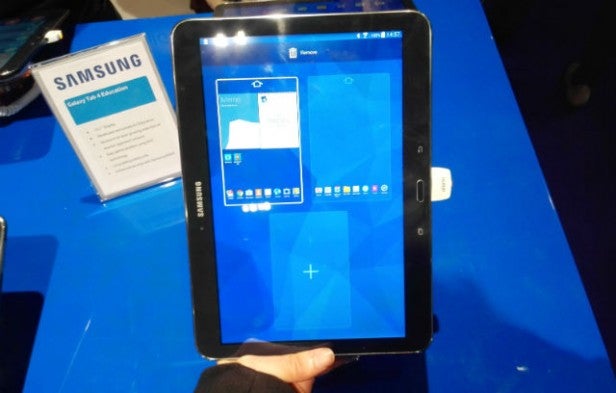 On the inside are a 1.3GHz quad-core Qualcomm APQ8026 processor, paired with 1.5GB of RAM. This should be quick enough to run less labour-intensive programs such as Google Drive, but may struggle with basically anything that doesn’t really belong in class, like HD movies. The Tab 4 Education comes with 16GB of internal storage as standard, but this can be boosted via the microSD slot. Bluetooth 4.0 and 802.11 a/b/g/n Wi-Fi also feature.

Samsung says that the 6800mAh Lithium-Polymer battery should be powerful enough to deliver up to 10 hours of Internet use or video playback and as much as 208 hours of music playback. Charging it back up to full capacity should take just shy of five hours, which is quite a long time.

We think that the Samsung Galaxy Tab 4 Education could take the classroom by storm, but mainly because it’s a tablet, rather than due to its educational credentials. Apart from Google Play for Education and the rugged case, it’s a fairly low-grade offering, and we hope this will be reflected in the pricing.