What is the Samsung Galaxy S5 Mini?

The Samsung Galaxy S5 Mini is a 4.5-inch Android phone that’s essentially the Galaxy S5 in a smaller body. Much like the S3 and S4 Mini. It looks like the S5, retains most of the flagship’s new features, but it does make some compromises. It doesn’t have a Full HD screen and it lacks the S5’s impressive camera — two of the S5’s best features. There are better value phones out there, but the S5 Mini is a step from from the S4 Mini.

So the good news is that from afar, the S5 Mini is every bit the spitting image of the S5. That’s down to the colours its available in and the positioning of all the key buttons and ports. The same curvy corners are still in place, as is the plastic silver trim around the edge, so no Galaxy Alpha metal here. It still has that dimpled plastic back, which makes a nice change from the polycarbonate rears on previous Galaxy handsets.

Much like the white S5, however, the white version of S5 Mini feels extremely cheap compared to the soft, more textured feel on the Charcoal Black S5. It’s a little more slippy to the touch and while you won’t lose grip of it, it simply doesn’t feel as snug or stylish as the One Mini 2. For this reason the black version is the one we recommend.

The S5 Mini measures in at 9.1mm thick and weighs 120g, making it slightly thicker and heavier than the S4 Mini as well. It’s not a difference you’ll notice, though. This is still a light, well-built phone. The plastic back still unclips to reveal a removable battery along with micro SIM card and microSD card slots. Around the back is the single speaker and camera sensor with LED flash along with the heart rate sensor featured on the S5, though the sensor isn’t especially accurate or useful.

The S5 Mini also retains the fingerprint reader, though it’s still a hit and miss affair. Apple’s Touch ID trounces it for consistency and accuracy, so much it’s hard to persevere with it. 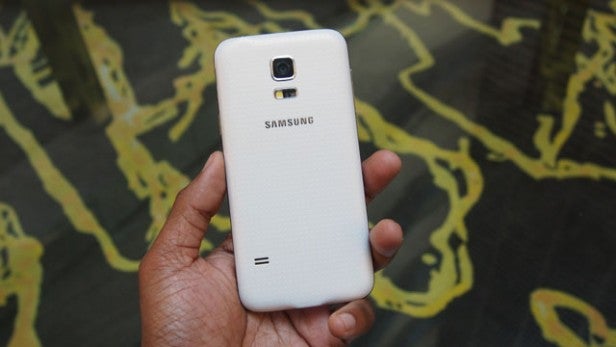 Elsewhere, there’s an infrared (IR) blaster to turn the S5 Mini into a universal remote control and the body is IP67 certified dust and water-resistant. This means you can dunk it in water up to one metre deep for 30 minutes as long as the battery cover is securely in place. You also don’t have to worry about any fiddly latches as the S5 Mini doesn’t have any.

The missing latch also reveals one of the hardware casualties. The micro USB 3.0 support is gone. That means you miss out on faster data rates to transfer files, music and video. It’s a shame that this isn’t included, but understandble in the name of keeping the price down — we can’t think of any phone at this price that supports USB 3.0. 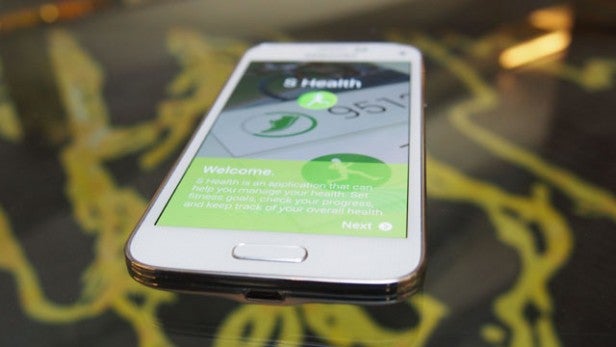 The S5 Mini is a step-up from the S4 Mini in three important ways. At 4.5-inches it’s 0.2-inches larger, it has a higher 720p resolution and it uses Corning Gorilla Glass 3.

That’s no real surprise on all fronts. Phones continue to creep up in size, while the Moto G has shown cheaper phones don’t have to make such dramatic compromises in screen resolution. It’s a Super AMOLED display just like the S5, and it’s just as bright, rich and colourful. It’s a great screen. If you are not entirely happy with the screen, Samsung still includes the same display settings on the S5 with dynamic, standard, professional photo, cinema and adapt display modes.

Like most smaller AMOLED, the S5 Mini uses a PenTile array. This relates to the arrangement of sub pixels that make up a single pixel in the display. Samsung uses four sub pixels as opposed to three, which most smartphone displays use. Those sub pixels are lined up diagonally instead of on top each other, as is the case with smartphones using RGB screens. This can can lead to some screen fuzziness up close, but you are going to be hard pressed to really notice it on the S5 Mini.