What is the Samsung Galaxy Mega 6.3?

The Samsung Galaxy Mega 6.3 is part of a new breed of phones. Or is it a new breed of tablet? Anyhow these are phones so big that they bulge out of any pocket. Phones so massive that holding them is a tendon exercise by itself.

The Samsung Galaxy Mega doesn’t have the high-grade specs of the Galaxy S4 either. At £450 or so it’s pretty pricy. The Galaxy Mega is likely to please giant phone obsessives only, and even then there may be more attractive options.

Just like the rest of the Galaxy series, the Samsung Galaxy Mega 6.3 it runs the Android OS.

It looks like an Galaxy S4 on growth hormones – just as plasticky but much larger. The Galaxy Mega has a 6.3-inch screen. Samsung also makes a slightly smaller 5.8-inch version of the Mega, which sells for around £100 less.

The display is much larger than the Galaxy Note 2’s screen, and that smaller device already had us discussing whether it was a phone or a tablet. The Galaxy Mega’s size issue is something that will put off a lot of buyers, but it is the entire reason for phone to exist. It’s the Godzilla of phones – although the Sony Xperia Z Ultra with its 6.4-inch screen looks like it might be Mechagodzilla. 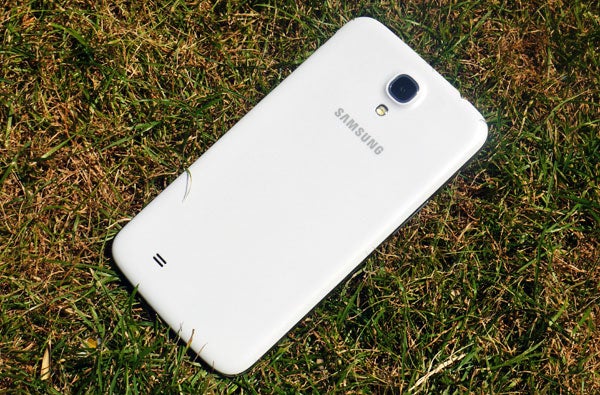 The Galaxy Mega is 167mm long and 88mm wide. That’s almost two centimetres wider than a Galaxy S4. For the vast majority of people this is a handful and a half, and it has pretty significant practical knock-on effects.

Using the phone in one hand tends to feel a little clumsy, awkward and precarious. Your thumb has to stretch to reach most of the screen, and much of it is simply too far away to reach at all. This not only makes the phone harder to wield, but also a bit easier to drop.

The large size has negative effects on the feel of the phone too. Like its Galaxy brothers, the rear of the Galaxy Mega is covered by a removable plastic battery plate. It’s a super-slim piece of plastic that helps the phone to stay a super slim 8mm thick. It appears to be about as thick as the cover used in the Galaxy S4, but as it’s even larger, its flex is all the more apparent. 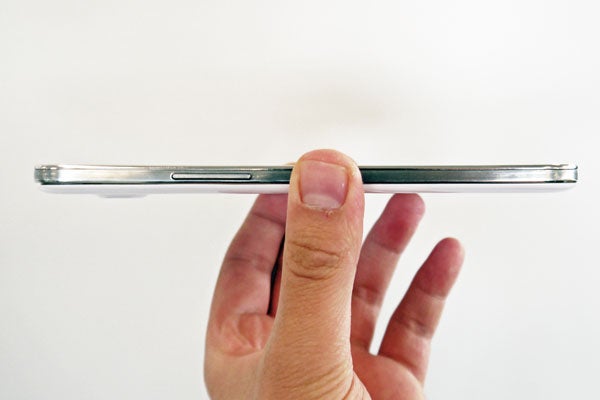 Looks-wise, the Mega is pure Samsung Galaxy. It’s thin, has a fairly slim screen bezel and a pair of innocuous light-up soft keys that surround the bottom select key.

Thanks to its plastic construction, the Samsung Galaxy Mega is not a phone that feels super high-end. However, there are some practical benefits to its design, and the dotty texture on both the front and rear stop it looking like a basic glossy plastic phone.

Its removable rear gives you access to the chunky battery unit and a memory card slot. As a phone that we can envision many people using as a portable movie player, having expandable storage is an important extra.

The Samsung Galaxy Mega does have a decent chunk of internal memory of its own – 16/32/64GB editions are out there, but in the UK most retailers are stocking the lowest-end 16GB edition. 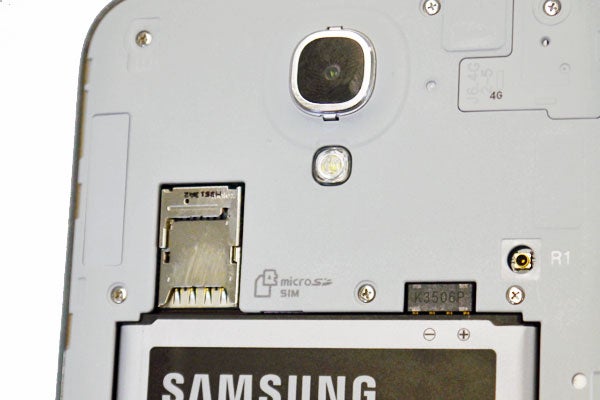 Its screen makes the phone quite difficult to use, but does the quality of the Samsung Galaxy Mega display make up for it?

The Galaxy Mega’s screen makes less of an impact in this respect than the Galaxy S4’s. It’s huge, yes, but in quality terms it’s not quite up there with the very best.

It has a 720p-resolution panel, where smaller phones are starting to use 1080p screens. Its display is not a blocky mess – it’s reasonably sharp – but far removed from the pristine smoothness of an ultra-high pixel density display. 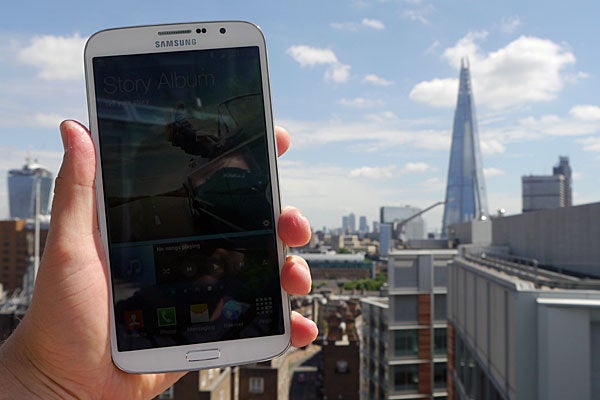 Confirmed: larger than The Shard

The S-LCD panel doesn’t have quite the black depth and contrast of the Galaxy S4’s OLED screen either, and at high brightness settings colours can look slightly washed out.

When not assessed among top-end peers, though, it fares better. The Galaxy Mega screen may be a slight case of quantity over quality, but it is still good.

As with the Galaxy S4, you can change the tone of the screen within settings for a more saturated or cool look – however as the phone uses an LCD screen rather than the OLED type, there’s much less need for this feature.

There’s an ambient light sensor that lets the phone manage both contrast and brightness depending on the light conditions. Thanks to this and the fingerprint-resistant layer of the screen, outdoor visibility is reasonably good – although not on-par with the Galaxy S4.