The Note Edge runs on Android 4.4 KitKat with Samsung’s TouchWiz UI and it’s largely the same as the Note 4. There’s less of the bloatware than in previous years, but we’d still like to see more stripped away for future handsets. Enhanced features introduced with the Note 4, like Multi-Window, are present, but the curved display adds some unique, if far from perfect, functionality.

The main use is to house commonly used apps you’d normally find arranged at the bottom of the screen. That’s things like the web browser, camera and Google Play shortcut. The little star above the row of apps allows you to edit those favourited apps, while swiping up from the bottom gives you quick access to the Edge screen Settings. You can still access this by swiping down from the top of the screen to access, but it’s a handy alternative. 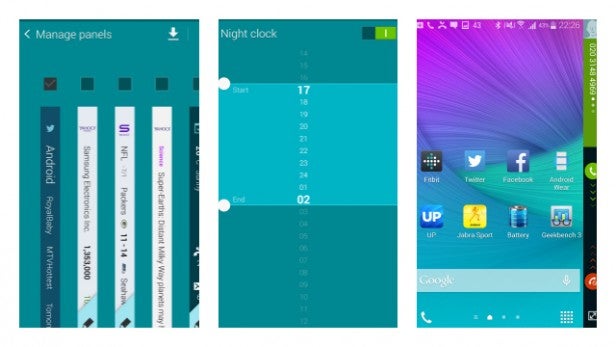 Above the little star, you can swipe down to see additional features that work on the second screen. There’s a 10cm ruler – we measured against a normal ruler to verify its accuracy – a simple stopwatch and count down clock, a shortcut to the torch flash on the back and the ability to activate the voice search. While the ruler is a nice touch, it’s safe to say you can live without most of these Edge screen features.

There’s scope to customize the Edge screen further, too. You can manage the panels to dictate what’s displayed, like notifications, quick access apps, phone calls, S Health data and even news delivered by Yahoo News. You can download additional panels but essentially most are news feeds. Express me handles what’s displayed on the panel when the phone is locked, while information stream lets you choose what Yahoo!-powered feeds appear. 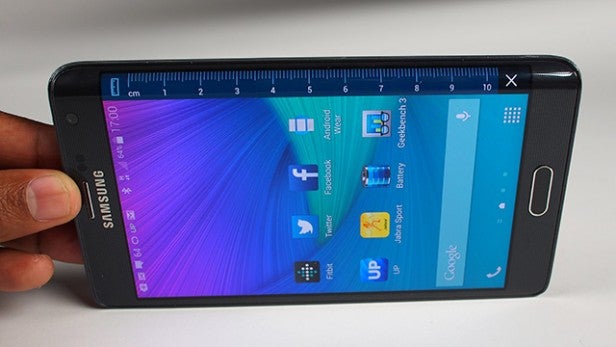 The night clock feature takes full advantage of the bedside table scenario where you don’t have to lift and awaken the display to view the time. Here you can adjust when the night clock jumps into action to save some of those power reserves when it’s not really needed. Lastly, Edge screen text let’s you adjust and personalise the text message that’s shown on the panel.

There’s screen orientation support here as well, so when you flip the side upside down the panel will change as well. That makes it more accommodating for left handed users although you are still stuck with having to use phone upside down, which is slightly ridiculous.

For all these options, though, we were left unimpressed by the utility of the edge screen. There’s some benefit and appeal being able to free up the screen when you are watching video, for example, but most of the applications are tenuous at best.

There are other problems, too. Content is displayed on the Edge screen facing in rather than facing out from the display and there’s no obvious way to change this. Samsung has missed a trick here. When it’s lying flat on a table, it would actually be quite useful to be able to glance over at the Edge and see messages and tweets as they come through.

No Note phone is complete without the S-Pen and it remains one of the key attractions of this phone. The S-Pen technology is based on a Wacom digitizer and while the look of it has slightly changed in comparison to the one included on the Note 3, it’s the changes in accuracy and pressure sensitivity that really matter.

In the box alongside your Note Edge, you still get the option of removable plastic and rubber nibs depending on the type of interaction you are planning. Pressure sensitivity is an impressive 2,048dps (degrees per second) to help produce a more accurate, fluid writing and drawing experience. 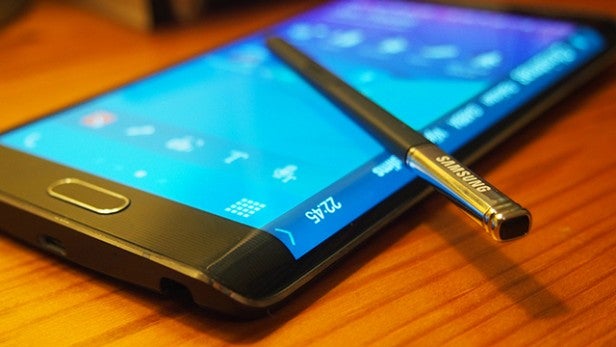 The app support is the same as it is on the Note 4 and pulling the S-Pen out from its cosy little compartment activates the S-Pen launcher. Here you get access to apps like Action Memo and Smart Select, while pre-installed Samsung apps like S Note and S Calendar are fully integrated with the S-Pen technology.

Apps like S-Note use  the edge screen area to shift the shortcuts that normally reside at the top of the screen to the edge, freeing up space. It’s nice to have a full canvas in drawing apps, but we’re sure people didn’t have that much of a problem the way things were set up already. 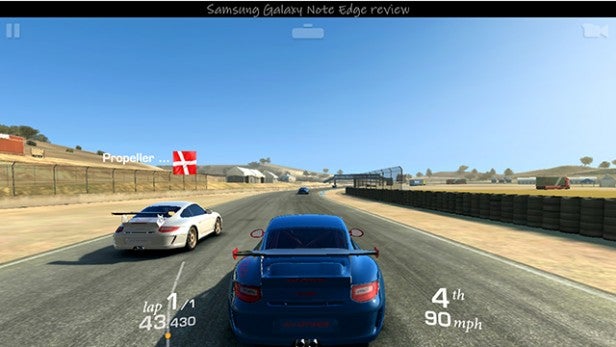 The Note Edge has the same core specs as the Note 4.  That’s means a Snapdragon 805 processor, 3GB of RAM and an Adreno 420 GPU. It’s a monster of a phone that runs just as smoothly and impressively as the Note 4. Samsung’s TouchWiz overlay doesn’t measurably impact on performance either, though we’d still prefer a pure Vanilla Android experience.

The benchmarks back up just how well the Note Edge manages everyday and more intensive tasks like video streaming, gaming and multitasking. Until the 64-bit Snapdragon 810 turns up in smartphones in 2015, the 805 and the Tegra K1 are the very best Android phone chips around.

Its showing in Geekbench 3’s multi-core test sits comfortably in the 3,000+ range, averaging a score of 3,200. That’s roughly the same as the Note 4 and significantly higher than the iPhone 6 Plus (2,863). If power is your main concern here, then the Note Edge is not going to let you down.