What is the Samsung Galaxy Note Edge?

The Samsung Galaxy Note Edge is basically the Note 4 with one peculiar addition, a curved screen. Bizarrely, though, it’s only curved on the right side of the phone and the reason isn’t really clear. Samsung hasn’t explained why it’s there and after the time we have spent with it, we are not sure either.

Priced at an expensive £650, the Note 4 could well give us a glimpse of phone design in the future, in its current state though, we can’t really see the benefits of the Edge to make you want to spend your money on it. 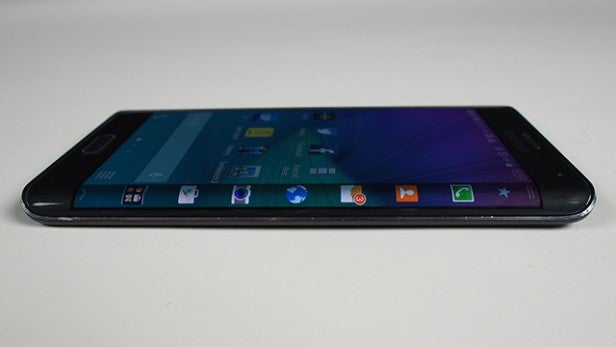 It doesn’t take long to realise how the curved edge changes the way you handle this phone. Unlike the Note 4, which comfortably balances its large frame with the slightly curved back and raised corners, wrapping your fingers around to grip in one hand has a slightly pinching effect. It’s not as comfortable to hold as the Note 4 or the iPhone 6 Plus. That’s down to the fact that it now replaces the anodized aluminium trim on that side, creating a more unbalanced feel.

Surprisingly, though, the extra screen segment doesn’t make the Note Edge much heavier.  The Edge weighs in at just 174g, with the Note 4 a couple of grams heavier at 176g. It’s only a fraction thicker, too – 8.5mm vs 8.3mm on the Note 4. Everything apart from that second screen is the same. 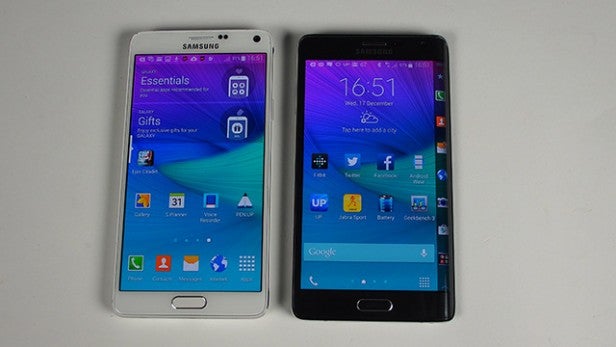 That means the Edge retains many of things that made us love the Note 4. The faux-leather plastic back – minus the horrible fake stitching of the Note 3 – gives the Edge a nice, assured grip and the back is removable so you can get to battery, the micro SD card slot and of course get your micro SIM card in place. Disappointingly, however, the slightly raised corners, which gave the Note 4 an extra degree of protection, are gone.

The buttons are largely in the same place and the home button packs in Samsung’s improved Touch ID-rivalling fingerprint recognition sensor. The exception is the standby button, which is now at the top of the phone to accommodate the curved screen. That makes it more of a stretch reaching a finger up to it, which is irritating

For S-Pen users, the Wacom-powered stylus is still intact of course, housed in the same compartment. Around the back you’ll find the same small speaker and camera sensor with heart rate sensor just below. 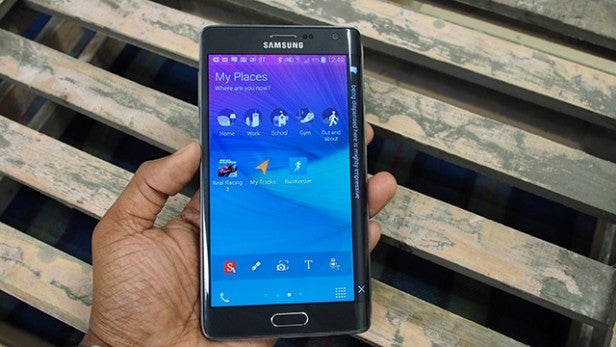 IIf you cover up that second screen, this is the same outstanding display from the the Note 4. It’s a slightly smaller 5.6-inch Super AMOLED panel with the same Gorilla Glass 4 protection that Samsung sneakily unveiled without telling anyone.

It has a 1,600 x 2,560 screen resolution, so you get an extra 160 pixels courtesy of the curved edge. The 524ppi (pixels per inch) pixel density is less than TrustedReviews Phone of the Year the LG G3 (534ppi), but what really matters here is that clarity is still exceptionally impressive. This is one of the best smartphone displays available.

You get the same immensely bright, vibrant and sharp results as the Note 4 and can enjoy those fantastic black levels when watching films watching. Colours are punchy and perhaps out of the box a little too colourful, which is easily solved in the display mode options found inside the Screen settings.

As we commented in our Note 4 review, most are unlikely to appreciate the jump from a Full HD 1080p display to a 2K QHD one, but having dropped down to a Galaxy S5 since, picking up the Edge really hammers home the big improvements Samsung is making with its smartphone displays.

So, what happens when you add an extra curved screen to an otherwise great one? Well, aside from working independently from the main display from a software point of a view, not a great deal. There’s no discernible  difference  between the two.