The Galaxy A70 is now available and it's got a lot going for it: lovely big display, massive battery and nice extras like super-fast charging and in-display fingerprint tech. Read on to find out more about our first impressions.

The Samsung Galaxy A70 might be the perfect device for buyers on a budget looking for a big-screened, long-lasting Android phone.

Let’s be clear: the A70 isn’t as flashy or futuristic as the Galaxy A80. While that phone has a sliding screen and rotating camera module, the A70 is a lot more restrained. Instead of focussing on exciting design changes it looks to offer a seriously long-lasting phone with a big, OLED display at a good price.

While there’s certainly some S10 DNA here, the phone that instantly sprang to mind after holding the A70 was the Huawei P30 – just a lot bigger. Like the P30, the A70 opts for a dewdrop notch (Infinity-U Samsung calls this) which juts out slightly into the phone’s 6.7-inch display. 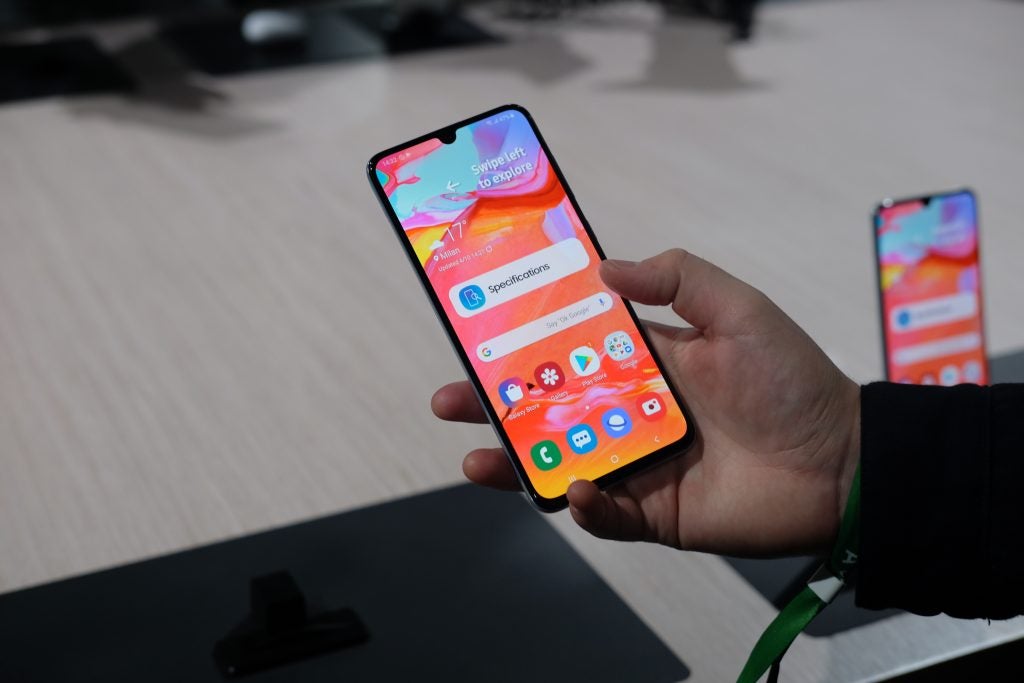 It’s a lovely looking display too, mostly down to the OLED tech used. Like all of Samsung’s panels it’s bright, colourful and sharp thanks to a FHD+ resolution. Getting a properly good OLED display for £370 is very impressive.

Another display trick is the in-screen fingerprint sensor that replaces the traditional sensor you’ll find on other A devices.

I wasn’t able to test this out in the demo room and the Samsung reps wouldn’t confirm whether or not it’s the same module used in the Galaxy S10. Still, it’s nice to see this tech filter down into the mid-range.

Display aside, the phone’s other highlight is an absolutely huge battery. Sitting inside the rather svelte A70 is a massive 4500mAh cell, dwarfing the S10’s 3300mAh battery.

Pair that battery with the lower-res screen and it seems like this phone will last much longer between charges than the Galaxy S10. When you do hit the red there’s Super Fast 25w charging via the USB-C port to boost you up again. 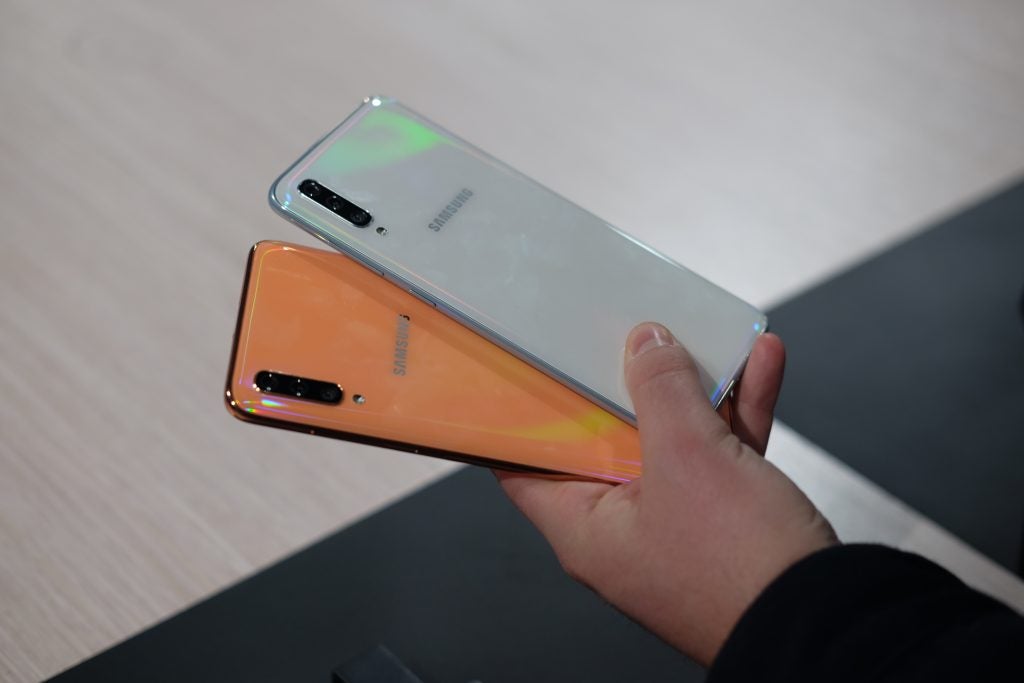 Flip the A70 over and you’ll find three cameras sitting in a vertical line on the back. There’s a main 32-megapixel sensor, an ultra wide 8-megapixel version and a 5-megapixel depth sensor. That final sensor’s job is to aid that blurry background effect, creating more professional looking portrait shots.

Testing time with the cameras was limited and I am not yet ready to make any judgements on photo quality, but I will say the camera app remains great and feels very snappy to both open and focus. There’s also a 32-megapixel camera on the front for face unlock and selfies.

Powering the phone is a octa-core chipset, with either 6 or 8GB RAM plus 128GB storage. There’s a microSD slot too, allowing you to expand that storage by an extra 512GB. 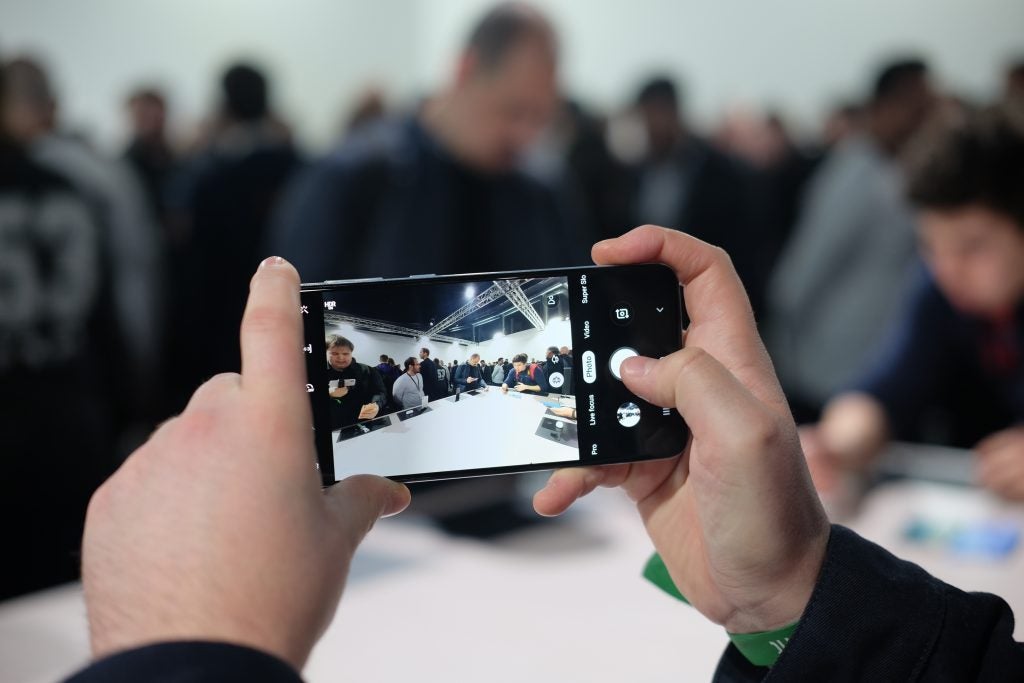 The Galaxy A70 is available and it’s got a lot going for it: lovely big display, massive battery and nice extras like super fast charging and in-display fingerprint tech. Here’s hoping it’s as good to use for an extended period as it is for an hour.

As always, the competition is tough in the mid-range space and there are a lot of alternative models to choose from that we have reviewed recently. Our guide to the best budget smartphones takes you through all of our recommendations but it’s worth picking out a couple of specific models. Top of that pick has to the Xiomi Mi 9, which is a formidable mid-range phone, available for a similar price to the Galaxy A70.

This has the fast Snapdragon 855 chip, HDR visuals, triple rear camera array and a 48-megapixel primary sensor. If you don’t mind not owning a phone from a big-name brand, then the Mi 9 is a great phone that packs a punch at an amazing price.

Update: we’re expecting the new models in this line to appear shortly, so we’ll bring you full reviews as those come in.