Curved monitors are the latest trend in the world of desktop peripherals, and while some offer a subtle benefit at most, Samsung’s latest screen packs a high-performance VA panel and much tighter 1,800mm radius curve in comparison to many such screens’ wider 2,400mm-radius curve.

It terms of resolution, Samsung doesn’t do anything out of the ordinary, remaining with a widescreen 27-inch 1,920×1,080 format. However, if image quality lives up to the brand’s usual high standards then this could be a great centrepiece monitor.

Samsung veers away from familiar design territory with the C27F591. Its large, circular base and set-back stand make the screen appear almost as if it’s floating when viewed from certain heights. The monitor is finished in silver metallic plastic, with the base and bezels also receiving the same treatment. Personally, I’m not a huge fan of this lighter silver finish; the darker grey on Samsung’s previous home monitors was more my cup of tea. 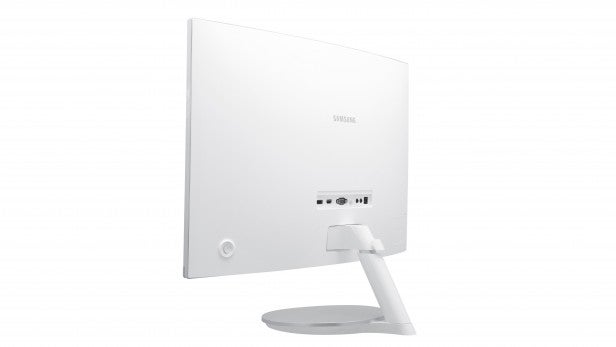 The top, right and left bezels are all incredibly thin, giving this monitor a few extra bonus points in the style stakes. The bottom bezel is uncluttered by labels and controls, with only a Samsung logo and status light present. The on-screen menus are controlled via a joystick on the C27F951’s rear – my much-preferred way of setting up a monitor.

Unfortunately, the C27F591 doesn’t offer any height or positional adjustments; it sits a static 11cm above the desk. This is a shame, although when you consider that most monitors with such features end up around £50 more expensive than their non-adjustable counterparts, you can see why Samsung has opted to keep things simple.

I had to place the monitor on top of a box in order to ensure it sat at a comfortable height for myself, which rather spoils the overall aesthetic. 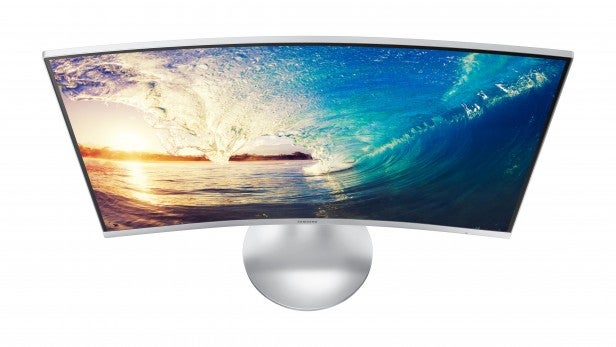 The rear of the C27F951 is finished in glossy white plastic, which again I’m not a huge fan of. On the positive side, the rear of the stand features a small cable routing to keep things tidy. In terms of inputs, Samsung has opted for one each of DisplayPort, VGA and HDMI ports, which ensure that most modern devices will be covered.

The curve of the C27F951’s display – like other curved panels – brings the corners of the screen just a little closer to your eyeline. This makes it easier to take in everything on the display without having to move your head. In addition, I found that the curve helped me to focus better, with the screen hugging my vision in a way that a flat monitor simple can’t replicate. 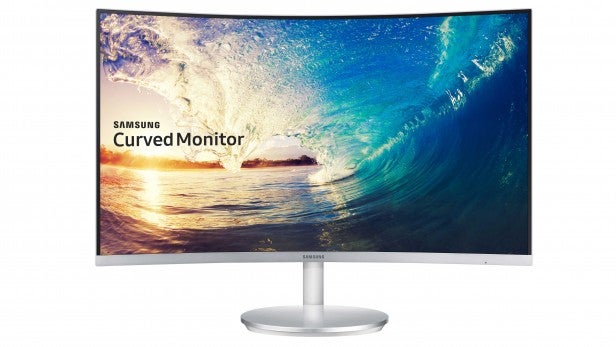 Samsung’s monitor also has AMD FreeSync technology built in. If you have an AMD graphics card that supports it, you can hook it up via the DisplayPort connector and enable FreeSync, which keeps the graphics card and monitor in sync. This eliminates frame tearing, which is a sign that the graphics card is unable to keep up with the monitor’s refresh rate, and is seriously effective at making games more immersive.

The monitor itself has a maximum refresh rate of 60Hz, so although it isn’t classed as a specialist gaming monitor, the quoted 4ms response time should be fine for less twitchy games such as simulations and strategy titles.

The C27F591 uses a Samsung-made VA panel. VA panels differ from IPS and TN panels in that in general they serve up much darker blacks and more punchy colours, normally at the slight expense of viewing angles.

Out of the box in Custom mode, the C27F951’s performance is fantastic. Colours are vibrant, and although the maximum backlight level felt just a little too bright for my eight-hours-per-day work life, turning it down a notch made things considerably more comfortable.

Quantitative testing revealed some seriously impressive figures. Peak brightness was fairly average at 275 nits, but it was the impressive deep black levels that give this monitor some serious street cred. I measured just 0.12 nits on pure black pixels, which is incredibly dark and means that high-contrast images will be displayed beautifully, with plenty of punch in brighter areas and subtle shades among the shadows. The overall contrast figure was measured at a huge 2,167:1.

Colours were displayed with superb accuracy, too. Not only was 99.3% of the sRGB colour gamut covered, but the monitor also achieved an uncalibrated accuracy score of 2.53 Delta E. This means that most colours are so close to accurate that even side by side, the human eye won’t be able to notice the difference between what the monitor displays and the actual “perfect” version of that colour.

Backlight uniformity can sometimes be a problem on curved monitors, but I’m pleased to report that there are no such problems with the C27F591. Even at its most extreme corners, the screen is a maximum of 9% darker than it is in the middle – which is about as good as you can expect from a non-professional monitor.

There are other modes available, including a rather more subdued Standard mode that reduces brightness and makes the monitor much easier on the eyes. Cinema mode punches up the brightness and sharpness – but I didn’t find the results particularly pleasant to look at. Dynamic Contrast didn’t make a huge difference when watching video. Finally, Basic Colour dials everything down in a similar way to Standard, making the screen easier to view.

Aside from the various image modes is Eye Saver mode, which dials up the warmth and drives brightness way down. This turns the screen a very warm reddish colour, eliminating most of the blue light that’s linked with sleep loss. I used this monitor only at work, so didn’t feel the need to activate the Eye Saver option, but if I ever found myself pulling a late shift then this mode is simply two clicks away via the joystick.

My only slight concern is over the C27F591’s viewing angles. There were no issues when viewing the display straight-on, but I didn’t have to move my head far to the side to lose a good deal of clarity. For a single user this won’t be a huge problem, but for multiple viewers of the screen – for a presentation, for example – the curve will be an issue.

I had expected a little more from the pair of 5W speakers that fire out from vents at the bottom of the C27F951. At first listen they’re atrocious, sounding horribly muddy no matter what genre of music. However, after switching from the default sound mode to Music, I was far happier with the overall experience. Music remains muddy sounding, but it delivers a little punch and bass, even if it’s somewhat artificial. 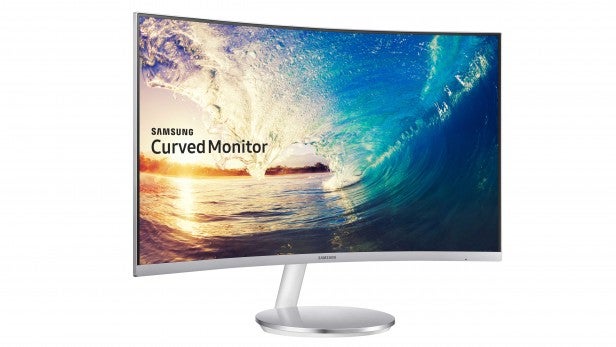 For watching the occasional video on this monitor, the integrated units will be fine. If you’re going to be listening to music, however, I’d suggest opting for headphones or desktop speakers.

The Samsung C27F591 is a great monitor – for a fairly substantial sum.

Of the monitors we’ve reviewed recently, the BenQ GW2870H is a close competitor with its 28-inch, Full HD VA panel. Its colour accuracy falls a little short of the C27F951, and it doesn’t have either that all-important curve or is it anywhere near as stylish. However, it’s £80 cheaper, which isn’t to be sniffed at.

But if curves are your thing and you have the money to spend then the Samsung C27F591 is a worthwhile upgrade.