The BD-J5900 is a budget Blu-ray player positioned one step up from Samsung’s entry-level BD-J5500. It lacks the bells and whistles of the flagship BD-J7500 but isn’t completely devoid of features, offering built-in Wi-Fi, internet apps and DLNA streaming. Not bad for £90 – but it’s up against some top-drawer competition from the likes of Sony, LG and Panasonic, so let’s see how it compares.

It may bear the hallmarks of a budget player, with its plasticky finish and lightweight bodywork, but the BD-J5900 makes up for it with an appealing design. Its curved shape mimics Samsung’s curved TVs and soundbars, while the top panel and fascia have an unusual ridged texture. It’s not a patch on the sleeved BD-J7500 but it’s certainly one of the better-looking budget players around. 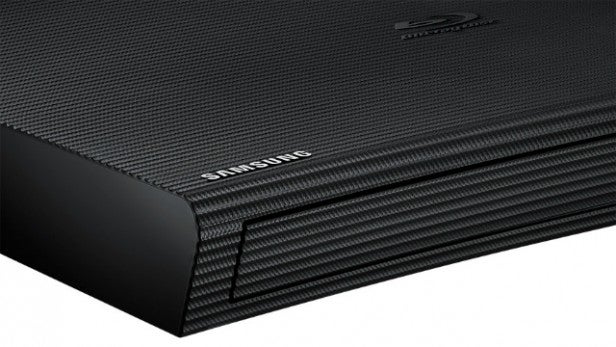 The sloping fascia sports a slim disc tray, on/off and open/close buttons, plus a USB port. You can hook up flash drives and external HDDs to this to play your music, videos and photos.

Like most players at this price point, the BD-J5900 is slim and compact, which is useful if space is tight. Of course, the flipside to this is that there isn’t much room on the rear for sockets. The simple line-up comprises HDMI output, Ethernet and coaxial output. But with most people simply hooking up the HDMI port to their AV receiver or TV, any more would be overkill.

The features list is surprisingly generous for the money. Built-in dual-band Wi-Fi lets you stream media files from DLNA servers and access a range of internet apps, which is a godsend if your TV doesn’t have built-in smart functionality.

Sadly, the budget price tag gets you a limited choice of web content, which pales in comparison to that offered with the BD-J7500. Based on the Opera TV Store platform, the line-up includes big names such as Amazon Instant Video, YouTube and Netflix, alongside Dailymotion, CinemaNow, AccuWeather, Hotlist and YuppTV, with lots more in the separate Opera TV menu. 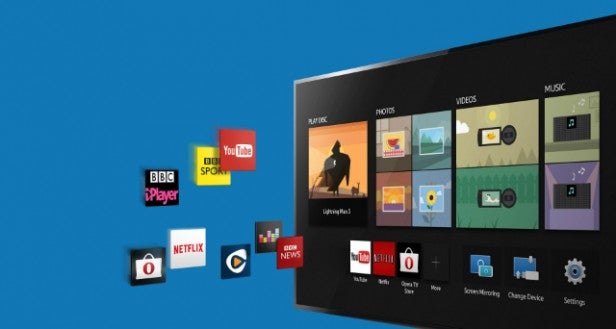 It’s a case of quantity over quality though – there’s no BBC iPlayer, ITV Player, All 4 or Demand 5, which is a real blow if you’re a keen catch-up TV user. Samsung’s website says BBC iPlayer is coming soon, and any new content can be added with a simple software update, but at present Sony’s BDP-S5500, LG’s BP550 and Panasonic’s DMP-BDT370 offer a better selection for the money.

However, the Samsung performs well as a DLNA streamer, allowing you to play DivX, XviD, AVI, WMV, MP3, AAC and JPEG. MKV and hi-res files are off-limits – you’ll need to play these through the front USB port.

Elsewhere, the BD-J5900 boasts 3D Blu-ray playback and screen mirroring, which lets you view compatible smartphones on your TV. There’s no 4K upscaling or multiroom CD streaming, but that’s hardly surprising given the price.

Using the BD-J5900 is a pleasure from the word go. The Quick Start mode gets you up and running in half a second, and the initial setup wizard runs you through all the key settings, including Wi-Fi connection. Colourful graphics and helpful descriptions make it easy for even the most technophobic users. 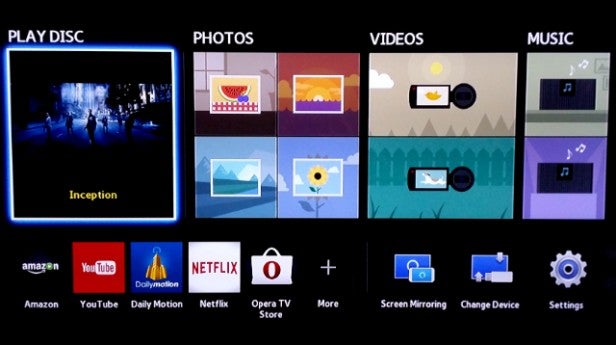 The homescreen is attractive and uncluttered, with large tiles displaying thumbnail images and logos. It’s split into several sections – Play Disc (which shows a still image from the loaded Blu-ray), Photos, Videos and Music.

The last three let you access content on whichever device is selected in the “Change Device” menu, be it a DLNA server, USB drive or disc. A row of options along the bottom provides quick access to the main apps, screen mirroring and the setup menu.

Exploring DLNA or USB content is made easy by the spaciously arranged menus, simple structure and familiar-looking icons. The deck jumps from page to page with alacrity and loads large files almost instantly. Web-streamed videos from YouTube play smoothly in sharp hi-definition quality.

The BD-J5900 doesn’t take long to load discs either. With Terminator Salvation, it took 25 seconds to get from an open tray to the Sony Pictures sting, which is relatively fast for this disc, while Prometheus took 15 seconds.

The remote is unlikely to cause problems with its solid rubber keys and intuitive layout. The buttons are clearly marked with bold white icons, and the all-important direction pad is thoughtfully placed. On the downside, the different sections could have been better separated and it’s not backlit.

To assess Blu-ray picture quality we loaded up Inception and were blown away by the Samsung’s dense and detailed images. Its contrast balance, black depth, colour fidelity and detail retrieval stay faithful to Christopher Nolan’s bold visuals.

Of course, the deck is only passing digital data to the TV like any other budget player, but that doesn’t make the results any less eye-popping. You can play around with the picture settings in the Tools menu. There are Movie and Dynamic presets, plus a User mode that lets you alter the contrast, brightness, sharpness and colour, but for the best results select “Normal”. 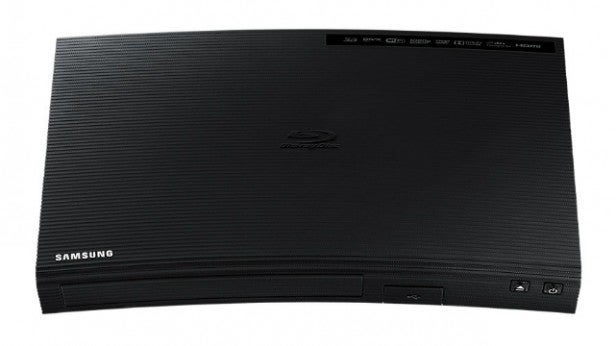 The foreboding dream-within-a-dream sequence at the start looks stunning. It’s set at night, but you never lose track of detail or movement within shadowy settings. DiCaprio’s black suit looks solid yet detailed, and the ornate Japanese backdrops are crisply drawn. When the building starts to crumble, the deck’s agile processing tracks the chaos smoothly and keeps judder at bay.

Skin tones look natural, but it’s detail that seals the deal – as Cobb and Ariadne dream-walk the streets of Paris, fine detail on buildings and sidewalks is razor-sharp, resulting in a punchy hi-def picture. That applies to 3D discs too, which are smoothly handled by the BD-J5900.

Switch to standard-definition and the deck’s 1080p upscaling isn’t quite as proficient as the Panasonic DMP-BDT370 – we could spot jaggies on diagonal edges and there’s a smeary quality to the picture – but for most people splashing £90 on a Blu-ray deck it’s perfectly acceptable.

With its cute design, smooth operating system and a generous features for the money, the BD-J5900 is a brilliant budget deck in many ways, but it’s let down by a limited range of internet content. There’s no catch-up TV, which is arguably the main reason people use smart apps in the first place. But if apps aren’t important and all you want is a slick hi-definition disc player then the BD-J5900 is an excellent choice.

Limited catch-up TV might make you think twice, but in every other respect the BD-J5900 is a fine Blu-ray spinner, boasting fast operation, a nice design and some nifty features for the money.