We could describe the BD-J7500 as a Blu-ray player, but that would be hugely underselling it. There’s so much more going on under the bonnet than simply spinning discs – for starters you can stream video, music and photos from other DLNA devices on your home network, catch up on TV shows or view your smartphone on your telly. If you don’t have this stuff in your TV already it’s a much cheaper way of getting it than upgrading your set.

And as a Blu-ray deck it’s similarly well-equipped, throwing 3D, 4K upscaling and dual HDMI outputs into the mix – but we’d expect nothing less from Samsung’s flagship machine. This comprehensive spec comes at a higher price than your typical budget Blu-ray deck but with so much on board we’re hoping it’s worth the investment.

The BD-J7500 is a fine-looking player, enhanced by a brushed grey sleeve wrapped around the middle of the gloss-black body. Samsung dabbled in a silver sleeve design a couple years back with the BD-F7500 and it worked a treat, although we prefer this more understated grey finish. This simple yet classy touch elevates it above Samsung’s cheaper players.

Despite the sleeve, the deck remains remarkably slim and compact at 46mm high by 201mm deep. It’s relatively well built too, although the casing has that familiar plasticky feel common among mass-market players. A row of touch-sensitive buttons runs along the top front edge, while the fascia bears an LED readout, disc tray and USB port.

The generous selection of rear sockets has more in common with a high-end deck than a budget one. You get two HDMI outputs, the second output allowing you to feed HD audio to a receiver independently (handy if your receiver doesn’t support 3D or 4K passthrough). There’s even a set of 7.1-channel analogue outputs so ancient amps without HDMI inputs can get some hi-res audio love. The line-up is completed by optical digital output and an Ethernet port.

On the Blu-ray side, the BD-J7500 plays 3D Blu-ray discs and offers 4K (2160p) upscaling, or you can upscale DVDs to 1080p if you’re the sort of person who prefers the player to do the donkey work, not the TV. There’s also support for 7.1-channel Dolby True HD and DTS HD Master Audio soundtracks (bitstream output and built-in decoding).

The key to the deck’s online functionality is the inclusion of built-in dual-band Wi-Fi, which allows it to operate on the 5GHz frequency as well as the 2.4GHz frequency used by most routers. You’ll need a dual-band router, but it will mean you can look forward to a lack of interference from other devices and less crowding from other Wi-Fi networks. 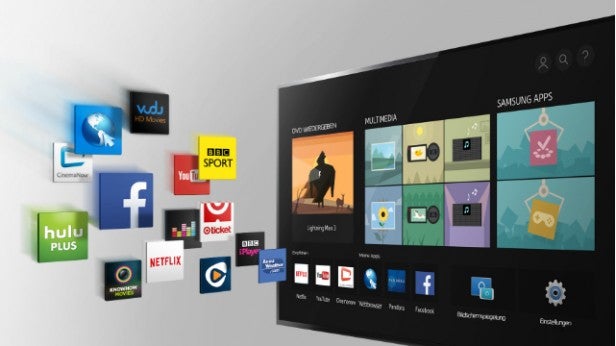 Once online you can stream media content stored on PCs and NAS drives connected to the same network. The deck supports a wide range of formats including – but not limited to – MKV, AVI, AVCHD, MP4 and DivX videos, plus MP3, hi-res FLAC, AAC, WMA and WAV audio files. The same formats can be played from USB storage media plugged into the front port.

Delve into the Samsung Apps menu and you’ll find a treasure trove of content, including the four main catch-up TV services – BBC iPlayer, ITV Player, 4OD and Demand 5 – plus well-known sites such as Netflix, Amazon Instant Video, Blinkbox, Deezer, YouTube, Facebook and Twitter. Elsewhere there are loads of game, lifestyle, sport and kids’ apps to download. Admittedly it’s packed with stuff you’ll never use, but there’s no denying that the choice is phenomenal.

Finally, Screen Mirroring lets you view your smartphone on the big screen, while Wi-Fi Direct lets you send media to the player from a wireless device over a peer-to-peer connection without the need for a router.

Samsung’s onscreen presentation is as eye-catching as ever. Fire up the Home screen and you’ll see a series of large, neatly-arranged panels. Thumbnails, logos and stylised graphics make the page look vibrant but not too cluttered. 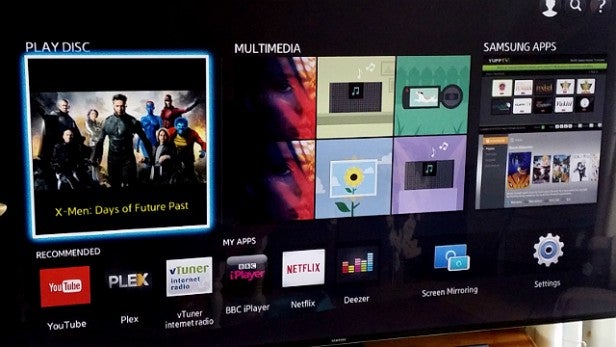 The three panels across the top let you play a disc, access DLNA/USB content and explore Samsung Apps. On last year’s BD-H6500, Samsung’s ‘Movies & TV Shows’ service was also found here, but it’s been removed from this year’s line-up as there are several movie services already on board.

At the bottom of the page is a selection of recommended and downloaded apps, plus icons for screen mirroring and the setup menu. The latter boasts a logical layout and a wealth of options. Elsewhere the DLNA menus follow a sensible and attractive menu structure, peppered with folder icons and cover art.

The Tools menu can be summoned during playback and offers quick access to often-used functions and picture presets. These include Dynamic, Standard, Movie and User – the latter allowing you to manually tweak sharpness, noise reduction, contrast, brightness, colour and tint.

This lively onscreen design makes operation fun but the deck can be a little slow to react, particularly when entering text on the virtual keyboard or moving around the Samsung Apps menu. It’s not a major issue, but takes the shine off an otherwise polished user experience.

Samsung sticks with the same remote design as previous players. That’s good news, as we’re fans of its intuitive button layout, perfectly placed menu controls and glow-in-the-dark playback keys. It also sits comfortably in the hand and the tactile rubber buttons are a nice touch (literally).

The BD-J7500 delivers solid, cinematic Blu-ray pictures, free from artifacts and motion tracking issues. The comic-book visuals of X-Men: Days of Future Past look sumptuous – from the wonderfully dense, moody shots of mutant oppression to the earthy hues of the Saigon military base where Mystique busts the mutants free.

Images are crisp and punchy thanks to the superb detail retrieval, definitively-drawn edges and spot-on contrast. Mystique’s bold blue skin looks rich and vibrant, but it’s also imbued with pleasing subtlety in the smooth colour blends and shading. Also impressive is the deck’s handling of dark scenes – you can make out every scrap of detail in the bunker as the X-Men battle the Sentinels at the start of the film. 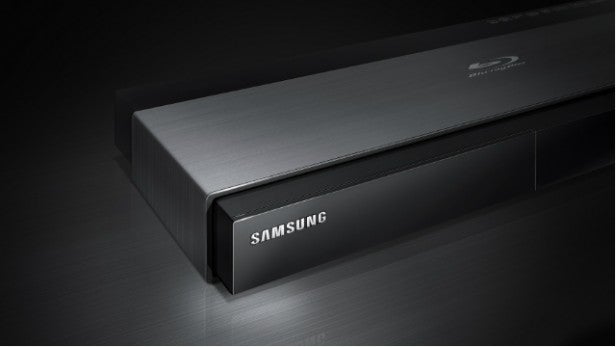 A cursory run-through of the Silicon Optix Blu-ray disc reveals flawless handling of the jaggies and Video Resolution Loss torture tests. Even the video clip of a slow pan across an empty stadium looks smooth and stable, with no moiré to be seen.

3D discs look as dazzling as ever, with no motion blur and minimal ghosting. As for 4K, it’s virtually impossible to tell the difference between the deck’s upscaling and our TV’s, although playing DVDs at 1080p reaps rewards. Artifacts such as edge jaggies, mosquito noise and blocking are kept to a minimum, resulting in sharp, punchy pictures that might make you reconsider upgrading your DVDs to Blu-ray if you haven’t already.

It’s quite a novelty to find analogue outputs on a budget deck these days so we took the opportunity to rig them up to our receiver and spin some CDs. We’re pleased to report that the Samsung offers a smooth, detailed and nicely balanced sound.

It may cost a little more than most budget players, but the BD-J7500 justifies the price with a wealth of features (including the best range of smart content on the market), striking Blu-ray pictures and a slim, stylish design. Some of the onscreen menus are a little sluggish and the build quality bears the hallmarks of a budget deck, but neither of these niggles prevents us from giving the BD-J7500 our seal of approval.

Another top-quality Blu-ray spinner from the Samsung stable, which mixes a wealth of features with stylish design and punchy pictures. It’s relatively pricey, but you’ll be glad you splashed out