Available in either 512GB or 256GB sizes, the drives can be installed into the latest desktop motherboards or be used as upgrades for the SSDs in many laptops. With read speeds rated at up to 2,500MB/sec and write speeds up to 1,500MB/sec, they’re among the fastest drives of their type on the market.

As stated in my review of the Samsung SSD 950 Evo m.2 drives, there are few things as nondescript as an SSD. They’re simply PCBs housing numerous chips; unlike motherboards, for example, there aren’t any extra features to speak of.

For what it’s worth, Samsung has adorned these latest drives with an all-black finish that looks particularly neat on the reverse side where there are no chips. It’s only a shame that this is the side that will be facing your motherboard once installed. 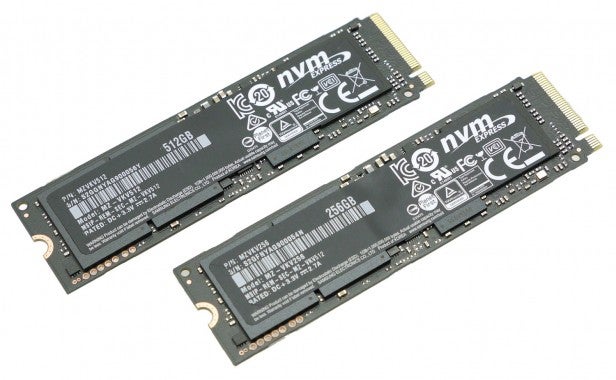 Note that the 950 Pro M.2 drives are 80mm long. With the M.2 standard allowing for a greater number of varying board lengths, ensure you double-check which size is right for your motherboard/laptop.

Unlike the 850 Evo m.2 drives, the 950 Pro use the PCI Express interface – so again, check compatibility with for your existing hardware. This change in interface opens up the potential speed of these drives from the maximum 600MB/sec of SATA to 15.76GB/sec.

Also new to these drives is the use of the NVMe standard, which we first saw with the lightning-fast Intel SSD 750-series drives. This is a new interface protocol specifically designed for SSDs – rather than previous standards that were for hard drives – and brings with it a boost in speed right across the board. 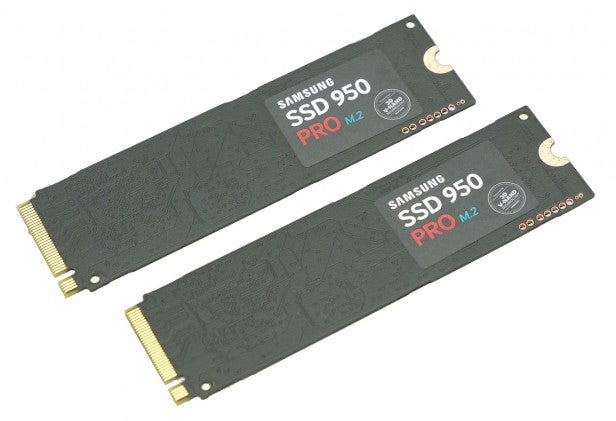 Again, though, you’ll want to confirm that your motherboard/laptop offers support for all these features, particularly with NVMe. Without BIOS/UEFI support, the drive may continue to work but it may not be bootable.

The above features combine with Samsung’s latest 3D V-NAND memory chips. Here, the transistors that make up the memory are stacked vertically as well as horizontally, which means they’re far more dense than conventional NAND.

As such, Samsung has been able to include an impressive five-year warranty with these drives, and it rates them as having a mean time between failure of 1.5million hours.