The Intel SSD 750 Series is the first set of consumer SSDs to use the new super-fast NVM (non-volatile memory) Express standard, bringing a new level of performance to everyday computer users.

Available in either 1.2TB or 400GB sizes they don’t come cheap, plus they’ll work to their full potential on only certain systems. However, these are the first of a future standard and, moreover, if you’re simply looking for the fastest storage around then nothing else comes close.

The Intel SSD 750 Series is so cutting-edge that most PCs simply won’t be able to either accommodate them at all or use them as a main bootable drive. So let’s first establish what you can and can’t do with them.

The Intel 750 Series is available in two form factors: a half-height PCI Express expansion card and what looks like a standard 2.5in drive. However, the latter isn’t a typical 2.5in SATA drive, and in fact uses a new SFF (small form factor) 8639 connector that’s designed especially for this new drive type. 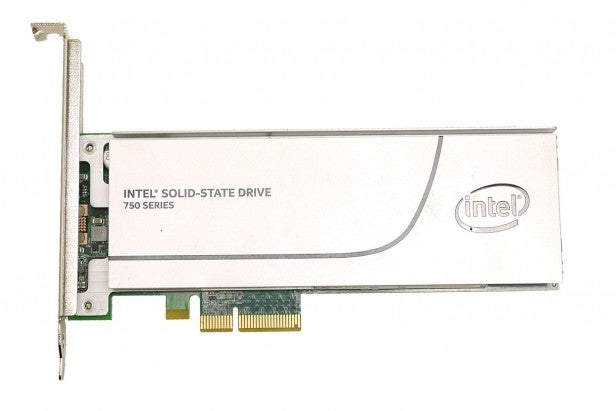 It’s likely that your PC won’t have one of these connectors, so you can install the 2.5in drive via an M.2 slot instead – but there will be a slight performance impact as a result. To do this you’ll need the drive, an SFF-8639 to SDD-8643 (mini SAS) cable that Intel provides, and an M.2/SATA power connector adapter. The latter is necessary since the M.2 doesn’t require the power needed by the drive.

Alternatively, you can get the PCIe expansion card, which is easier to install. It simply requires an x4 (or higher) PCIe 3.0 connector. Just drop the card in and away you go. The only minor stumbling block is that, because this SSD taps straight into your processor’s PCIe 3.0 bus, it will be nabbing four of the lanes. For Intel LGA 1150 systems – where the processor has only 16 lanes – this could have a potential impact on graphics performance, since graphics cards usually take up all 16 of those lanes.

For most systems, the real-world impact should be minimal. It’s likely that only SLI/CrossFire setups, where bandwidth is limited by the reduced number of lanes, will encounter issues. Moreover, X99 systems have 40 PCIe 3.0 lanes so it shouldn’t be an issue here.

Next, you’ll need to consider whether you want the drive to be bootable. As it is, the drive will be usable but only as secondary storage. If you want to use it as your main boot drive you’ll need to ensure your motherboard’s BIOS supports NVMe. At the moment this is fairly limited, with only Intel Z97 and X99 chipset motherboards supporting the drives. Intel has provided a list of NVMe-compatible motherboards that it has verified, but some others also work so it’s best to check with your motherboard manufacturer.

Lastly, you’ll also need a compatible operating system. Windows 8.1 and above have pre-installed NVMe drivers, but Intel also provides its own – which improve performance. 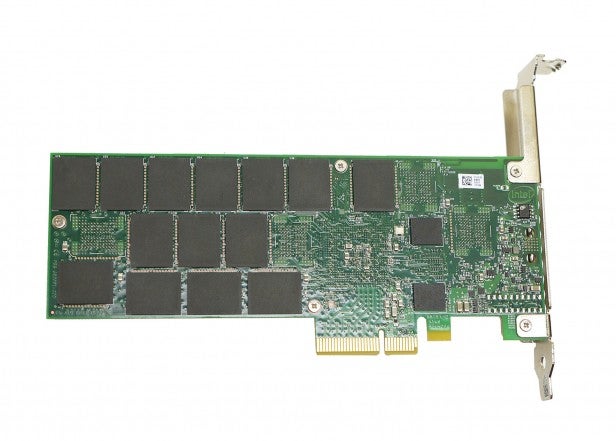 Before we dive into our performance testing, a quick word on what NVMe actually is and what hardware lies at the heart of the Intel 750 Series.

NVMe , or Non-Volatile Memory Express, is a new communications interface/protocal developed especially for SSDs. This is unlike all previous storage standards that were developed with hard drives in mind.

Put together by a consortium of vendors that includes Dell, Intel, Samsung, SanDisk and Seagate, the NVMe specification includes such things as requiring only a single message for 4KB transfers as opposed to two, and a huge uplift in queue numbers and depth (from 1 command queue with 32 commands to 64K queues with 64K commands per queue). The chief benefit of these changes is intensive parallel processing tasks akin to those on servers, but there’s also a general improvement in day-to-day operations such as large files transfers and random access times.

Away from the NVMe interface, the actual NAND employed by the Intel 750 Series is Intel’s 20nm, 128Gbit MLC technology. On the PCIe card version, these are actually distributed into different-sized packages: the chips under the heatsink are all quad-die 64GiB, while the chips on the rear are single-die. This is presumably for reasons concerning heat, although performance must play a part too.
A total of 18 chips on the front and 14 on the rear equates to 1,376GiB in total, making for 18.8% over provisioning for this 1,200GB drive.