Sakura Wars is an enjoyable revival of the iconic series, presenting a fascinating blend of genres. Unfortunately, it far too often falls victim to tired tropes and writing which treats its excellent female cast as little more than objects. Still, if you're a sucker for engaging stories, wacky combat and a strange, unusual world I recommend giving Sakura Wars a try.

Since emerging on the Sega Saturn back in 1998, Sakura Wars has remained an understated yet iconic member of the JRPG genre and become immediately recognisable thanks to its infectious theme song and an unorthodox blend of visual novel and strategy mechanics.

Having received countless sequels, anime series and other adaptations, Oji Hiroi’s eclectic creation has never stumbled into reboot territory. That is, until now with the arrival of Sakura Wars. A soft continuation of the original story, it maintains many of the original’s hallmarks while forging its own ambitious path forward.

It makes some noticeable fumbles, largely due to its tiresome inclusion of outdated anime tropes and oftentimes misogynistic depiction of women. It’s a crying shame, since this is one of the genre’s most accomplished efforts in years, appearing surprisingly high-budget given the relative niche it occupies.

So it’s unfortunate this progression doesn’t push forward writing that is frequently creepy in the way our male protagonist leers over the game’s heroines, lessening the impact of genuinely emotional moments of worthwhile character development. All this aside, there’s still plenty to love about this Sakura Wars revival. 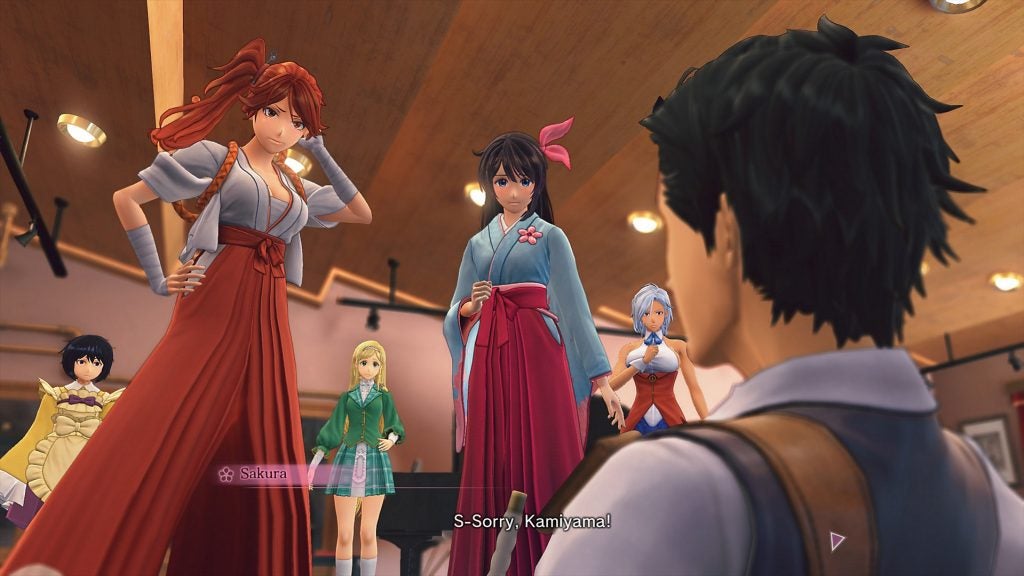 Sakura Wars is wonderfully unique in its setting and characters. Taking place in a fictionalised version of Japan’s Taisho Period (1940) where demons threaten to cross into our world, society is protected by the World Luxuriant Opera Federation.

This absurdly named organisation consists of beloved actresses who also double as mech pilots, jumping into giant robots to do battle with evil at a moment’s notice. It’s an absurd premise but is sold with enough melodramatic conviction that I immediately found myself smitten by it. However, this immersion is ruined by arguably the most important factor – Sakura War’s protagonist.

You play as Seijuro Kamiyama, a naval captain who is suddenly transferred to Tokyo and put in command of the Imperial Combat Revue. Japan’s division of the aforementioned organisation has been struggling for years, its global reputation in tatters thanks to repeated attacks and a wider history that holds them back from greatness.

Kamiyama is your archetypal protagonist; lean, black-haired and seemingly faultless in their talents. This is why many of the Revue’s members fall head over heels for him when they’d be better off going with anyone else. Maybe I’m being too harsh, and always made dialogue choices that painted him in a positive light, but many situations are engineered with lascivious intent, which always left a bad taste in my mouth. 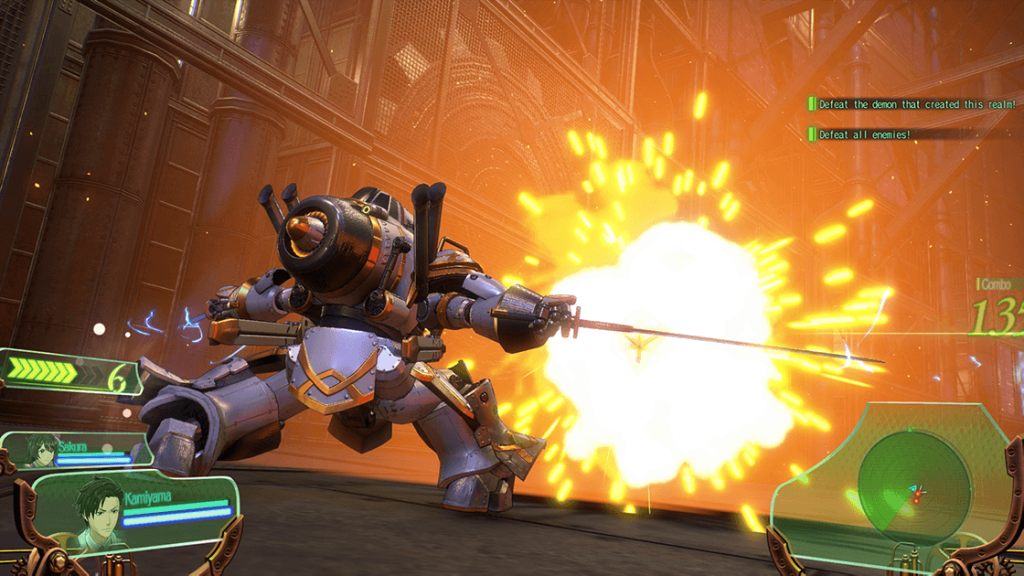 Your new headquarters is situated in a frankly gorgeous theatre, and this where much of Sakura Wars takes place. You’ll explore the sprawling stage, pristine dining hall and underground hanger communicating with an excellent cast of characters, many of which act as romantic interests for the player. It’s a tried-and-true visual novel approach which falls victim to its worst habits, failing to realise we’re now in 2020.

That being said, much of Sakura Wars is well-written and worth the emotional investment, especially once you find yourself falling down the rabbit hole of certain characters. Sakura is the titular mech pilot. She’s a young, aspiring actress with a heart of gold, intent on honouring her troupe’s legacy while forging her own path forward. She cracks under pressure, messages on your in-game phone often riddled with cutesy spelling mistakes.

Hatsuho is another highlight. A bashful shrine maiden who doesn’t take crap from anybody, giving her captain a knuckle sandwich for being a creeper on more than one occasion. Other heroines include an ambitious writer and a childish ninja, both of which have their fair share of time in the spotlight. After the first handful of episodes, you’ll be focused on a specific one, propelling you towards one of several different endings.

Extended dialogue sequences are exceptionally executed. From a first-person perspective, you’ll uncover speech options by interacting with the environment, piecing together the perfect things to say that compliment your growing relationship with each troupe member. The sound cues that accompany the right decisions are hugely satisfying, and you gain a visual idea of your progress in-between episodes, which themselves are presented as charmingly old-school episode previews.

These moments also highlight the creepier aspects of Sakura Wars. Unsavoury comments surface as the cursor brushes past chests, thighs and other features. It makes the women feel like objects servicing our protagonist, and actions available to the player only reinforce this gross representation. You can avoid it altogether, but the fact such things surface so frequently is fiercely outdated, even for a genre like this. 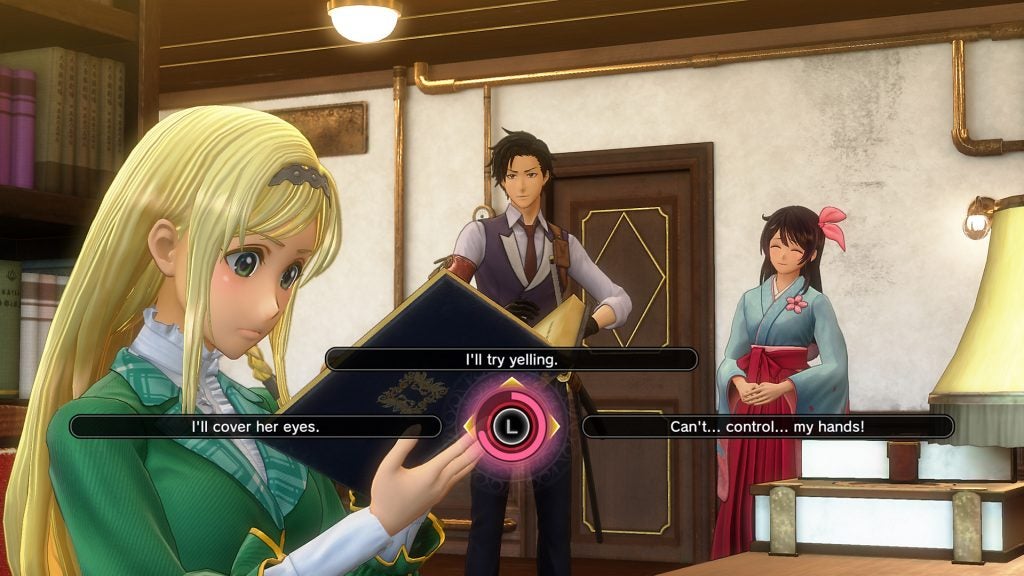 Combat in Sakura Wars is fairly simplistic, aping the likes of Dynasty Warriors with a few RPG elements thrown in to spice things up. You control a variety of different mechs, all of which are piloted by either Kamiyama or the wider theatre troupe. You’ll do battle against demons, reboots and greater antagonists introduced throughout the campaign. Levels are vast yet linear as you blast through demonic environments wiping out everything in your path.

It feels fine, yet is hardly remarkable in the grand scheme of things. Regardless of the mech you’re controlling, all of which have their own distinct weapons, combat lacks a sense of impactful finesse to really help it shine. It’s also a stark departure from the series’ roots, which may prove controversial.

Inconsistent camera controls and collision detection also frustrate, making it far more difficult than it should be to utilise Sakura War’s already limited combo system. You’ll earn additional armour, attack power and relationship points by building up kill streaks and executing specific moves, which come naturally due to a lack of challenge. It’s a blessing that these sections are irregular enough that powering through never felt like a nuisance.

That, and I can’t imagine many are coming to Sakura Wars hoping to be enthralled by the combat. It’s a side dish to the unfolding narrative and character moments, both of which are always at the forefront. 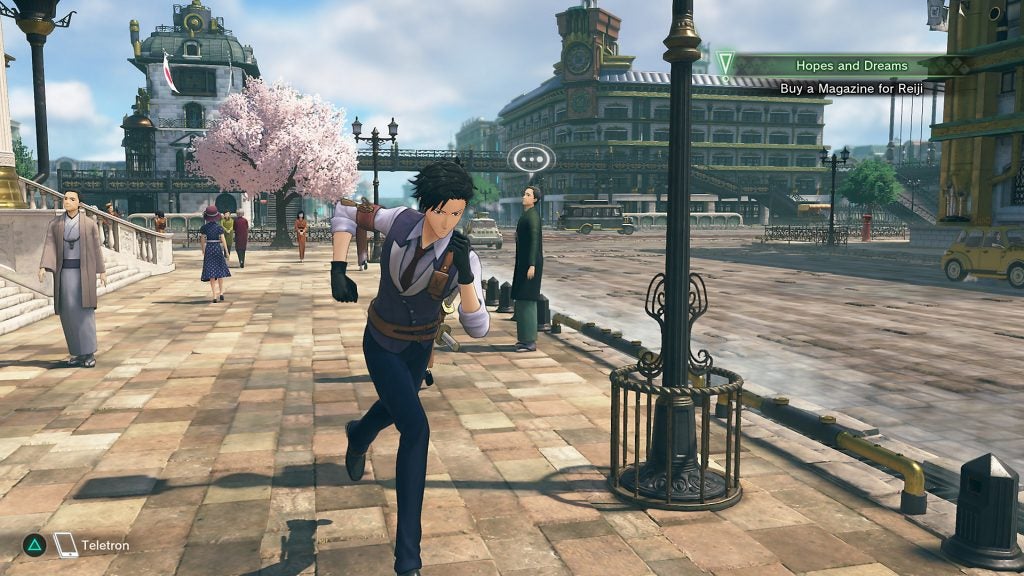 Outside of the main story, there’s plenty of optional activities to jump into, many of which help improve relationships with characters and unlock plenty of bonus goodies. After the opening hours, you’ll be free to explore a sprawling vision of Tokyo to communicate with friends and take on optional quests. Most of these are pretty simple but normally result in new conversations and scenarios I loved to experience.

There’s also Bromides – unlockable postcards which harken back to the series’ past. Hardcore fans will adore all of the references, all of which feel crafted with a careful amount of love. You can buy ones featuring modern characters from the theatre shopkeeper, although be careful since they’re in limited supply. You can replay past missions with different mechs through a combat simulator, earning you bonus experience if you’re dedicated enough to grind.

Sakura Wars is an enjoyable revival of the iconic series, presenting a fascinating blend of genres that kept me engaged as I delved deeper into its characters’ stories and intriguing central mystery.

Unfortunately, it far too often falls victim to tired tropes and writing which treats its excellent female cast as little more than objects. It’s harrowing since the stories beyond these gestures are worthwhile and heartfelt.

These issues aren’t impossible to overlook, and it’s worth dealing with them to earn the engrossing adventure hidden beneath them. If you’re a sucker for engaging stories, wacky combat and a strange, unusual world I recommend giving Sakura Wars a try.