What is the Sage Nutri Juicer Plus?

The Sage Nutri Juicer Plus is a high-end centrifugal juicer. The ‘Plus’ in the name denotes it’s a step up from the original Sage Nutri Juicer, adding a puree extractor for making smoothies and desserts, too.

Although the latter is more powerful, the Nutri Juicer Plus offers plenty of oomph. It’s fairly expensive, but this juicer proves to be a great machine if you need the puree function. 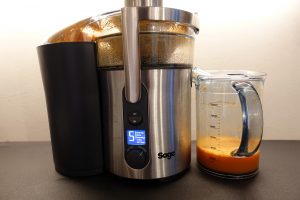 The Sage Nutri Juicer Plus has a pleasant, substantial feel to it, without actually being too heavy. Its grey plastic details, pulp bin and plunger complement the round stainless-steel body and feed chute. The transparent lid and bowl let you observe the machine’s centrifugal process.

Both the pulp bin and the transparent plastic juice jug are of a generous size. The jug lid has a built-in froth separator and millilitre measurements displayed up its side, helpful for anyone looking to make a specific amount of juice (or test how much juice this machine will yield).

At 8.4cm in diameter, the chute is wide enough for a whole apple or a small beetroot. The plunger is grooved and needs to be inserted into the feed chute at a specific position, but there’s helpful marking on the outside of the feed chute to offer guidance.

When assembled, the Nutri Juicer Plus is only 19cm wide and 27cm deep (without the jug attached), which is quite compact for such a powerful juicer. The height is a relatively standard 43cm. At just over 1 metre, the power cable is a good length, enabling easier worktop placement.

The control panel of the Nutri Juicer Plus includes an on/off switch, a clear LCD speed indicator and a speed control dial. All are straightforward to use because every turn of the dial lights up different suggestions for juicing, from soft fruit at setting ‘1’ to hard veg, apple and pineapple at setting ‘5’.

For safety, a die-cast metal locking arm with a grey rubber-coated handle holds the lid in place. When the machine is in the ‘unlocked’ position, an ‘L’ will blink on the screen and the on/off button won’t work. 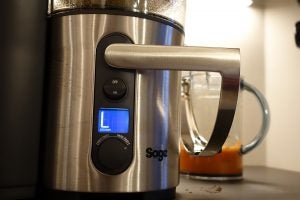 The Sage Nutri Juicer Plus comes with two discs: the Nutri disc and the Froojie disc. The Nutri disc is made from stainless steel with titanium-reinforced cutting blades, surrounded by a micro mesh filter; it’s designed for optimal juice and nutrient extraction.

The Froojie disc is specifically created to ‘juice the un-juiceable’, such as bananas and passion fruit. However, it can also tackle a variety of softer fruit, including mangoes, melons and strawberries. This disc acts like a blender, crushing the fruit into a puree without creating any residue pulp. It comes with a Froojie insert – a plastic bowl to go around the blade.

Other accessories include a removable rubber juice nozzle, which is useful for those occasions you want to juice straight into a glass. A cleaning brush is also provided for scrubbing the mesh filter and the sharp blades of the discs.

In addition to the general instructions, there’s a folded A4 sheet called Heston’s Tips and Techniques, addressing the science behind juicing and guiding you to Sage’s recipe site. However, at this price, a glossy printed booklet would have been nice, particularly since this machine can be used for smoothies, as well as dips, sauces and soups. 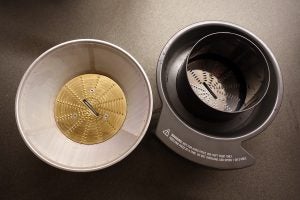 Sage Nutri Juicer Plus – What’s it like to use?

I challenged both discs of the Sage Nutri Juicer Plus with a variety of fruit and veg, and the results were all smooth and delicious.

Helpfully, the manual provides detailed instructions as to which fruits can be pureed, and which speed setting to use when juicing in general. While the LCD screen already makes suggestions at the turn of the knob, the manual is more thorough, informing you of correct speeds for juicing cauliflower and Brussel sprouts. (Yum?)

I started with a tropical smoothie, containing mangoes, pineapple and kiwi fruit. First, I decided to ‘Froojie’ the peeled and de-stoned mangoes, creating a thick puree. Then I used the Nutri disc to juice the peeled-and-cored pineapple and kiwi with minimal effort. Processing the pineapple at setting ‘5’ was quite noisy – but at least it was done quickly.

Since the mangoes I used weren’t entirely ripe, some bits remained stuck in the juicer bowl. The resulting puree was smooth, but on the thick side, making the smoothie difficult to sip through a straw.

I then tried to juice the mangoes with the Nutri disc instead, which resulted in a more sippable mixture. The two large mangoes yielded 275ml of clear juice, while the discarded flesh was still delicious enough to eat on its own. 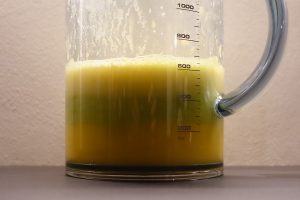 Juicing six medium-sized carrots yielded an impressive 375ml, while the residual pulp was so dehydrated it had a powder-like quality. Four Granny Smith apples produced just under 300ml of juice.

Leafy greens were underwhelming, with both 100g spinach and 100g kale yielding just 45ml of juice each. But other centrifugal juicers rarely do better.

The removable juice nozzle was useful when juicing straight into a glass. However, be sure not to fill the glass all the way up, otherwise you’ll still experience some splashing. Splash-back can also happen from the feed chute, even when juicing berries at setting ‘1’. The plunger comes in handy here. 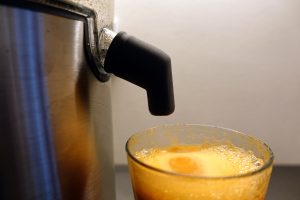 Juicing at high speeds – such as at setting ‘5’ – is a fine balance between using the plunger to stop ingredients from flying out and avoiding plunging down too hard. When juicing tough veg such as beetroot or parsnips, I instinctively wanted to press the plunger down a bit. However, this meant juice started leaking from the rim of the lid.

In the case of leakage, the instructions recommend trying a slower juicing speed and pushing the plunger more slowly. While I appreciate this advice, perhaps a more airtight lid would be better? Compared with some other juicers, the Nutri Juicer Plus’ spout rarely drips. However, some residual juice tends to remain in the bowl. Tilting the machine a little can help you get to the dregs.

I tried using the Froojie disc more. Overall, the results really depend on the type of fruit used. Very ripe apricots still turned out quite a thick puree, while strawberries delivered something more akin to a liquid.

However, once hulled, no part of the strawberries were wasted – whereas juicing would have led to discarded pulp. The resulting puree was good for creating a coulis-type strawberry sauce, which worked wonderfully over some Viennetta. 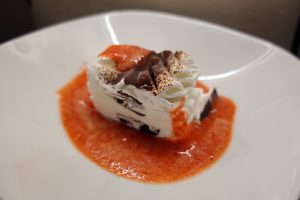 After using the Froojie disc at the recommended setting ‘1’, the instructions suggest turning the speed up to ‘2’ to eject the final bits of fruit puree – this really does work and is helpful for cleaning purposes as well.

Clean-up wasn’t difficult as such, but the Froojie disc and its insert meant there was more washing-up to do. The transparent bowl, juicer lid, pulp bin, juice disc, the jug and its lid are all dishwasher-safe – top shelf only – while the Froojie insert is not. It isn’t clear whether the Froojie disc can be cleaned in the dishwasher; I chose to err on the side of caution. 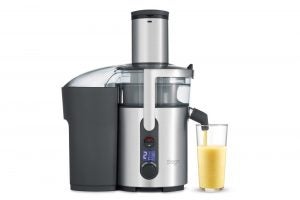 Why buy the Sage Nutri Juicer Plus?

The Sage Nutri Juicer Plus is definitely a pricey option. If you’re looking for a simple juicer that gets the job done, the Dualit Juice Extractor is almost as good at a more affordable price.

But the Froojie disc does add value, enabling the Nutri Juicer Plus to function as a blender/food processor to some extent. So if you’re keen to make delicious fruit purees for smoothies and desserts – or you simply want a machine that will look like the real professional deal in your kitchen – the Sage Nutri Juicer Plus won’t disappoint.

Good yields make this a great juicer, but it’s expensive if you don’t need the puree function.