What is the Sage The Nutri Juicer Compact BJE200?

Part of a family of that includes the Nutri Juicer Plus and Pro as well as the original model, The Nutri Juicer Compact is smaller in size but not in features. Like other Sage juicers, it places the emphasis on juicing quickly and evenly. This doesn’t just give speedy results if you’re in a rush – by processing fruit and vegetables fast, it creates less than 2°C of heat transfer, maximising the nutrition to preserve an average of 70%. There’s no compromise on its centrifugal power either – a mighty 900W motor outclasses several comparable compact juicers. 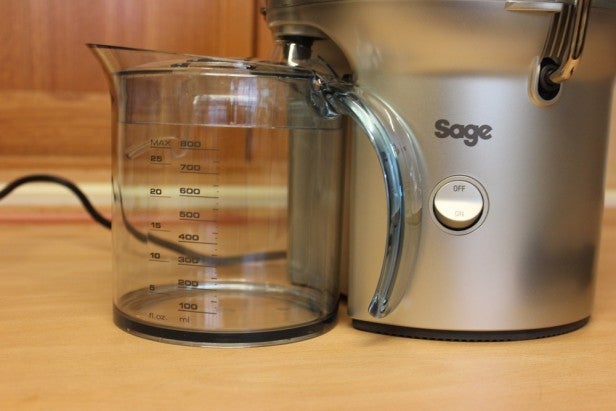 Rather than simply shrinking down the original Nutri Juicer, the design of the compact model has been reconfigured to suit its dimensions. Rather than a 3D jigsaw of plastic parts, what’s striking is just how few elements need to be removed for cleaning after juicing. An integral pulp bin and stainless-steel micro mesh filter basket and blades sit on the base, which is topped by a lid with an extra-wide 7.5cm feed chute and a food pusher, all of which is locked into place by a slim metal arm. All the parts are a breeze to remove and reassemble. 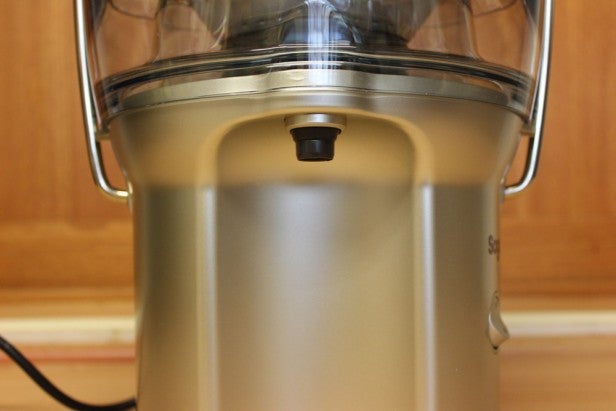 The base is elegantly slim, while the lidded juicing jug fits snugly against one side, and the juicer’s spout meets it perfectly to prevent splashes. There’s also a froth separator built into the jug’s lid. A rocker switch at the front switches the juicer on and off and there’s only one speed but it’s a startlingly fast one – so much so you have to wait for it to get up to speed before juicing and disassembling. Juicing advice and recipes to try are included as is a handy double-ended cleaning brush and spatula to help remove pulp from the bin and mesh filter. 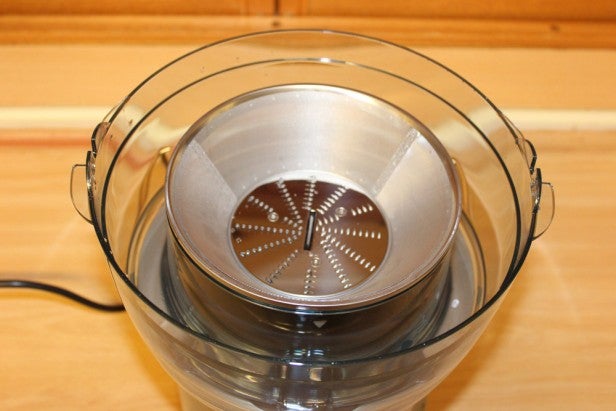 Sage The Nutri Juicer Compact BJE200 – What’s it like to use?

The Nutri Juicer Compact was easy to assemble, so we were ready to start juicing in under a minute. We started with oranges. The juicer takes a few seconds to start up and the advice was to not add fruit until it was spinning at maximum speed. Even before fruit was added, it generated a substantial amount of whirring noise. We added three peeled oranges in halves to the feed chute and without even using the food pusher, the Nutri Juicer Compact made short work of them, with no time to even take a photo before they were processed. It was possible to gauge the power of the machine by the ripples that were blowing across the surface of the orange juice after processing the fruit. The juice was fantastically smooth with a fresh, sweet taste that set it apart from supermarket juice, with some froth for the separator to take care of, and no unprocessed fruit left in the machine. Inside the bin, the pulp was firm and relatively dry, making removing it simple. 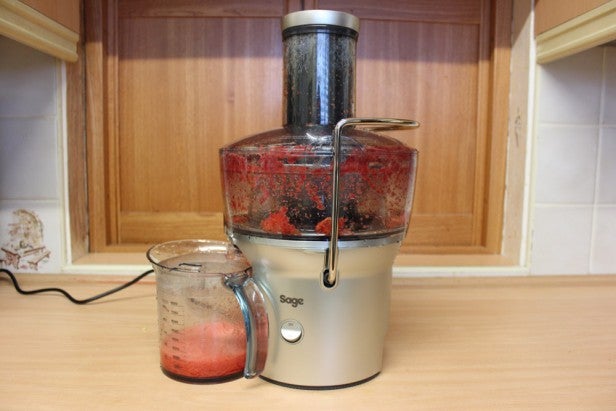 Next, we tried some soft fruit – strawberries. Again, the processing was lightning fast and the juice had an even, consistent texture with some foam. Some smaller pieces of fruit had spun off the blades and into the pulp bin without being processed but the majority of the fruit was juiced. Moving onto harder fruit, we added large chunks of peeled pineapple. This required the food pusher to be used to ease the fruit towards the blades but relatively little pressure was needed. The juicer handled the chunks well but after processing, there were a couple of small slivers that had been thrown clear of the blades. 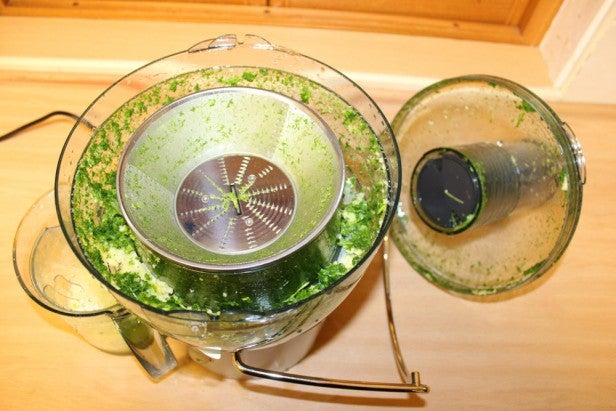 Finally, we tried some green leafy vegetables. The advice was to process these with other fruit, so we combined some kale with pineapple. However, the machine is so powerful it tended to suck in the leaves before the harder fruit. Despite this, the volume of juice was good, with plenty of the kale being processed and a minimal amount of wastage. Throughout all the juicing, there was no mess and no drips.

Clean-up was hassle-free with all the parts being dishwasher-safe. The included brush was effective at getting the pulp out of the basket before washing, meaning that cleaning by hand would also be straightforward. 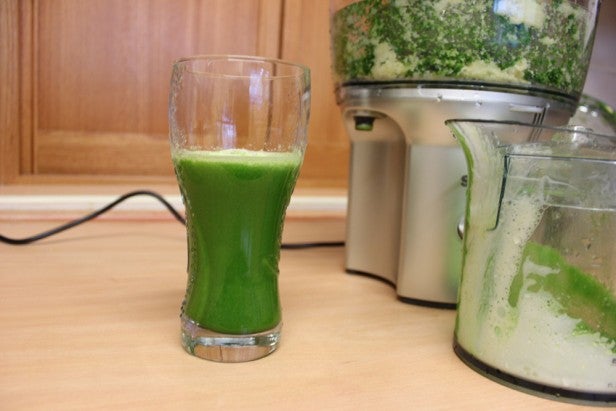 Should I buy the Sage The Nutri Juicer Compact BJE200?

Mess, a complicated assembly and labour-intensive clean-up can deter many from taking up a juicing habit but with The Nutri Juicer Compact, you’ll suffer none of these problems. It’s super-fast, pleasingly efficient, and also takes up very little room on the worktop or in a cupboard. The one fly in the ointment is that it’s relatively noisy, meaning that if you don’t want to wake the
rest of the house in the morning, you’d be better off juicing the night
before.

The Nutri Juicer Compact is a superb all-rounder that’s great for smaller kitchens. If you’re not sure whether juicing is for you, this is a smart place to start.