Great capacity and good yields, but the Sage Big Squeeze is expensive.

What is the Sage Big Squeeze?

The Sage Big Squeeze is the only “slow” juicer in the company’s six-strong juicer lineup – and it comes with the heftiest price of £399.95.

It’s far from slow, however. Like other masticating juicers, the Big Squeeze has a more economical motor, but also the ability to crush and press fruit and veg effectively in less than a minute.

The screw-and-filter design enables it to squeeze juice out of fresh produce, and it’s particularly successful with leafy greens and berries. 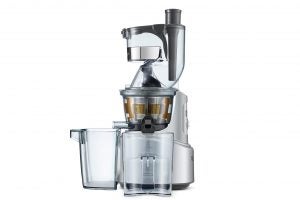 The Sage Big Squeeze may seem tricky to assemble, but the instruction manual will set you on the right path. Attaching the drum lid with the feed tube to the juicing bowl proved the fiddliest bit.

However, orange markings on various detachable components will assist when it comes to aligning the various parts correctly. The orange colour can also be found on the silicone rotation wipers that keep the juicing bowl clean when in use, which is cute.

The juicing unit is mostly transparent, with some metal and dark grey plastic detailing. The plastic-covered screw sits inside the stainless steel mesh strainer, which in turn is sits inside the 400ml juicing bowl. 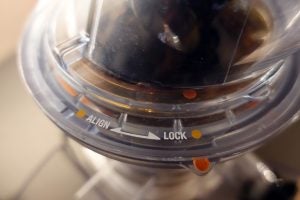 The juicing bowl has “ml” and “oz” measurements, since it can be used for mixing juice with the help of the detachable plastic-and-rubber spout cap. The cap is also useful for stopping the juicer from dripping.

On top of the juicer are two feeding options. The narrow feeding tube is for hard vegetables and high-fibre foods – such as carrots, beets and spinach – and it comes with a pusher. The wider feeding basket is meant for vegetables and soft fruits such as apples and oranges.

While at 34cm wide and 30cm deep the Big Squeeze doesn’t take up much countertop space horizontally, it’s a tall juicer at 48cm – which meant I was unable to open one of my wall cabinet doors during testing.

When not in use, I tended to store it in two pieces: the assembled juicing unit, measuring about 36.5cm in height, and the motor part, measuring about 27cm tall and weighing what must be the majority of the appliance’s 7.5kg. Still, a generous 1.3-metre electric cord allows for the juicer’s flexible placement. 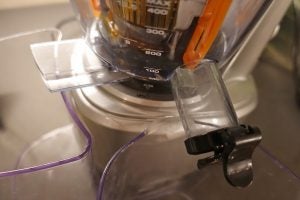 There are two transparent jugs included. As mentioned, one features hard-to-read “ml”, “oz” and “cup” measurements that serves as the juice jug, while the other is meant to be the pulp bin.

The jugs are of course handy, but take up extra space. While the masticating juicing process produces less splash-back and froth, it would still be nice to have a foam separator lid for the juice jug.

The motor part of the machine is silver plastic and features a rubber-coated “forward, off and reverse” switch. Above the switch, a red light will come on when the machine is assembled correctly and plugged in.

The power switch uses a rocker mechanism. Pushing its upper half will switch on the juicer. Holding down the lower half will put the juicer in reverse. The latter will come in handy should any pieces of fruit or veg become stuck during the juicing process.

The juicer comes with a small grey-handled cleaning brush. No recipe booklet is provided, but the Sage website features a couple of recipes. 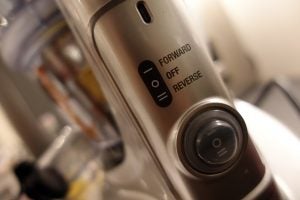 I tried juicing a variety of fruit and veg with the Sage Big Squeeze and achieved good overall results. It excelled at juicing leafy greens and softer fruit – two instances where centrifugal juicers may struggle as they chuck away lighter pieces without squeezing out all the available liquid.

My standard kale test – 100g of shredded supermarket varieties – produced 60-100ml of juice. During the juicing process, the machine was wonderfully quiet – with the exception of some amusing squishing sounds.

Spinach seemed to take slightly longer, but 100g yielded 50ml of juice with a bit of extra foam.

While most juicer manuals recommend that you alternate your ingredients during juicing, this is most pertinent here. Some bits of spinach remained stuck inside the drum lid, which could have been likely pushed down by other ingredients. 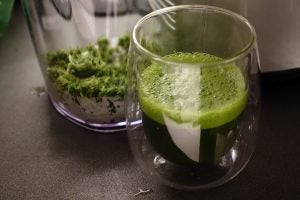 It was somewhat confusing to note that the Sage website encourages you to juice whole apples, while the instructions recommend that you slice an apple into four.

Juicing a whole apple with the Big Squeeze is possible – the feeding basket is wide enough – but juicing bigger pieces also means they’re more likely to become stuck, requiring you to use the reverse function to dislodge them.

While I managed to juice a whole apple without a hiccup, a chunk of a whole pear managed to get stuck on the juicing screw for a bit, requiring me to hold down the reverse button for a few seconds.

As hard vegetables are meant to go into the much narrower feeding tube, I spent some time cutting carrots and beetroots into chunks and pondering whether this was indeed making the whole process slower. 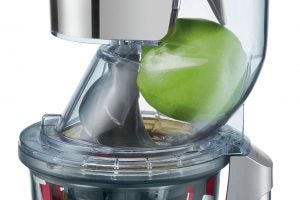 Six medium chopped-up carrots produced 250ml of pulpy juice – not a stellar result compared with fast juicers, but not bad for a masticating juicer. Since carrots tend to crumble when squeezed, this wasn’t entirely surprising. The discarded pulp was still moist enough to use in a carrot cake, resulting in zero wastage.

So was it any slower than a centrifugal juicer? The short answer is, no. While perhaps you may need to do more chopping for an easier juicing experience, the difference in actual juicing times remains negligible. I juiced a kiwi, a pear and two oranges in 1min 40secs, which can hardly be described as an arduous wait. 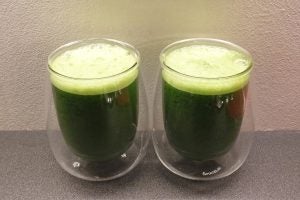 The instructions recommend filling the juicing bowl with water and letting it run for a quick rinse before juicing the next batch, or for pre-cleaning. This helps to clean the juicing bowl and get rid of some bits of pulp stuck in the mesh filter.

The manual doesn’t recommend washing any removable parts of the Big Squeeze in the dishwasher, since it “can cause damage to them due to prolonged exposure to harsh detergents, hot water and pressure”.

That said, washing the juicer by hand isn’t too much of a chore, particularly if you remove the whole juicing unit in one go and flush water straight through it. The cleaning brush is helpful here for removing the most stubborn bits of pulp from the mesh filter. 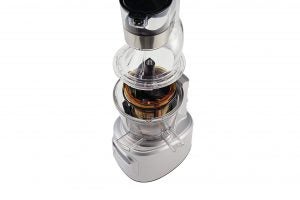 Why buy the Sage Big Squeeze?

While it may not be as effective as a centrifugal juicer for harder veg, the Sage Big Squeeze makes up for it when it comes to softer fruit and leafy greens, helping to reduce waste whilst producing delicious juice without the noise and the mess.

Still, the Big Squeeze stands tall and sturdy over its smaller and more affordable masticating rivals, with a greater capacity and commendable yields across all fruit and veg.

Great capacity and good yields, but the Sage Big Squeeze is expensive.