What is the MMV702 Mega Mouth masticating juicer?

Not only will it chew and squeeze your fruit and vegetables until scarcely a drop of juice remains, but it will also take on small, whole apples in its wide feed chute, berries in its hopper, and make nut milks too.

Two extra screens make it into more than just a juicer, with one turning frozen fruit into sorbet and the other producing nutritious smoothies. Plus, its brushless motor is whine-free, meaning you can partake in a bit of morning juicing without waking up the house. 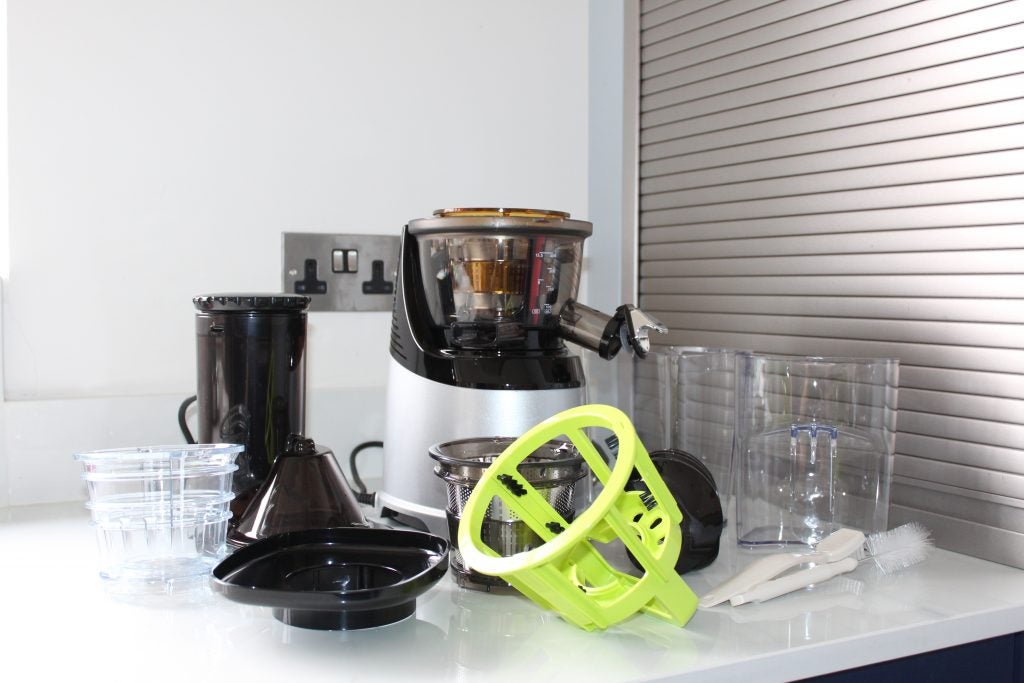 Part of a new generation of vertical slow juicers (sometimes referred to as cold-press juicers), the MMV might have a compact build but it’s deceptively powerful. Slower rotation is generally considered better for vertical juicers and the MMV delivers here, too; it rotates at 60rpm to squeeze out every last drop of fruit.

One downside is that it’s weighty at 6.85kg, so it may be a permanent worktop resident.

The machine has one speed and a reverse option should anything clog, and is controlled via a button that’s awkwardly positioned at the back of the base.

A juicing bowl with two spouts – one for ejecting pulp; one for juice with a non-drip cap – sits on top and contains the juicing auger for shredding, wiper blades and the screen of your choice. These include the juice screen for fibre-free juice, a smoothie screen for blended drinks, and a blank cone for frozen food.

Ingredients are fed down a chute with the hopper in place for smaller pieces. Two jugs – one for pulp and one for juice – fit inside each other after use. 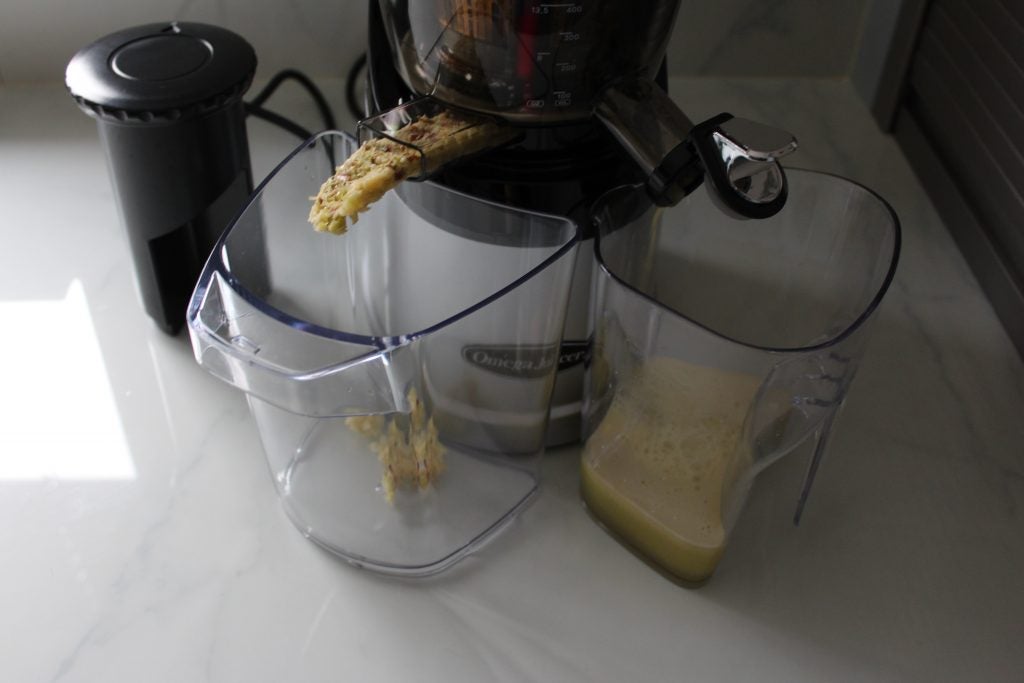 MMV702 Mega Mouth masticating juicer – What’s it like to use?

There’s a fair number of components to the MMV, with two screens that weren’t easily identifiable from the instruction booklet. On the plus side, it was easy to put together, offering dots that align for assembly and a recipe book that even includes ideas for reusing pulp.

I started by juicing hard apples, which had to be halved to fit. These juiced in seconds with a very dry, almost solid pulp ejected; and a good yield of 150ml of juice from two apples. The juice was sweet and refreshing, but quite foamy – a separator for the jug would have been welcome. Closing the spout after juicing was complete stopped all drips immediately.

Next, I tried juicing soft fruit: some grapes. Here, the hopper came in handy, as I could add several at a time without trying to aim them into the chute. A large bunch yielded 250ml crisp, clear juice, without much foam. A small amount of pulp was ejected, and again it was quite dry.

Inside the machine, there were small chunks that had become stuck around the edges of the bowl and that hadn’t reached the auger – but, otherwise, there was little waste. Juicing can sometimes produce surges and splashes of liquid as fruit is processed, but the MMV maintained a steady flow throughout. 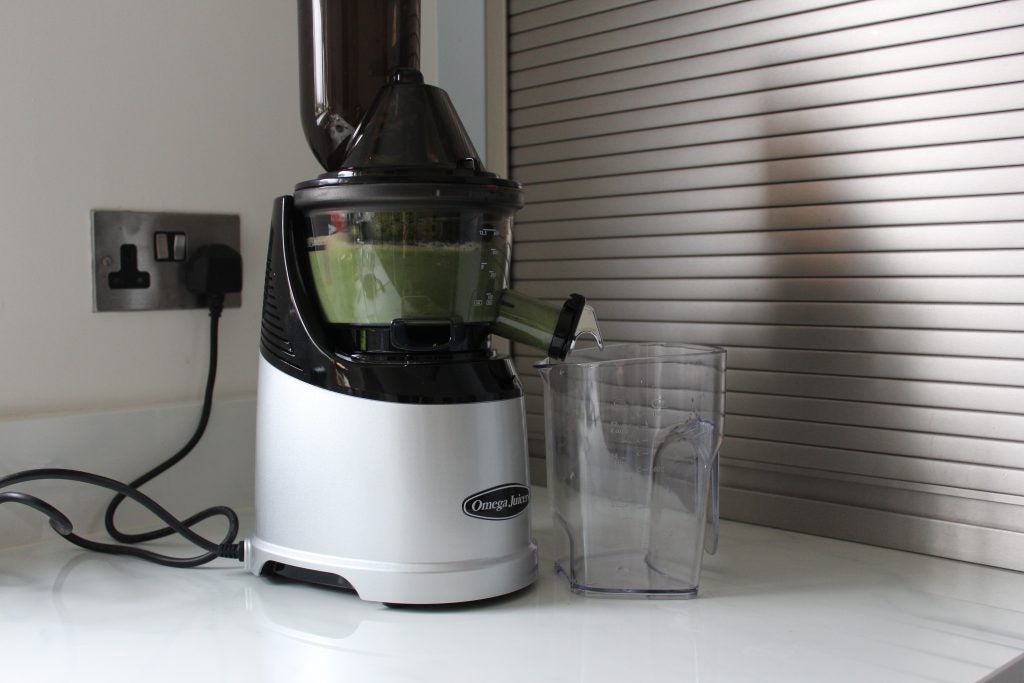 Moving onto recipes, I tried the carrot and celery juice. First I added the fibrous celery, of which the MMV made light work, followed by hard carrots, which again were easily processed – although the amount of pulp increased substantially. Finally, I added broccoli and pear, which went through effortlessly. The resulting juice was a murky concoction, but tasted far better than it looked.

Swapping the screen for the strainer, I made a spinach smoothie. This is mixed inside the bowl with the spout closed. Adding frozen spinach, banana, walnuts and milk, I let the MMV run for around 30 seconds before opening the spout. This produced an iced, thick smoothie that was sweet and tasty. However, some frozen ingredients had wrapped around the auger.

I finished by making sorbet from frozen mixed berries and the blank cone. After encountering some clumping initially, I found that I achieved best results by adding just a few berries at a time. This produced a steady flow of puréed fruit sorbet that had a pleasingly sharp flavour and consistent texture. Inside, a few berries had stuck to the auger – but, otherwise it was clear.

The advice in the instructions was to scrub parts by hand to maintain efficiency. Fortunately, three brushes had been provided to make it as easy as possible: a brush that fitted around each screen, plus two for poking into crevices. A thorough de-clogging clean took me around five minutes. 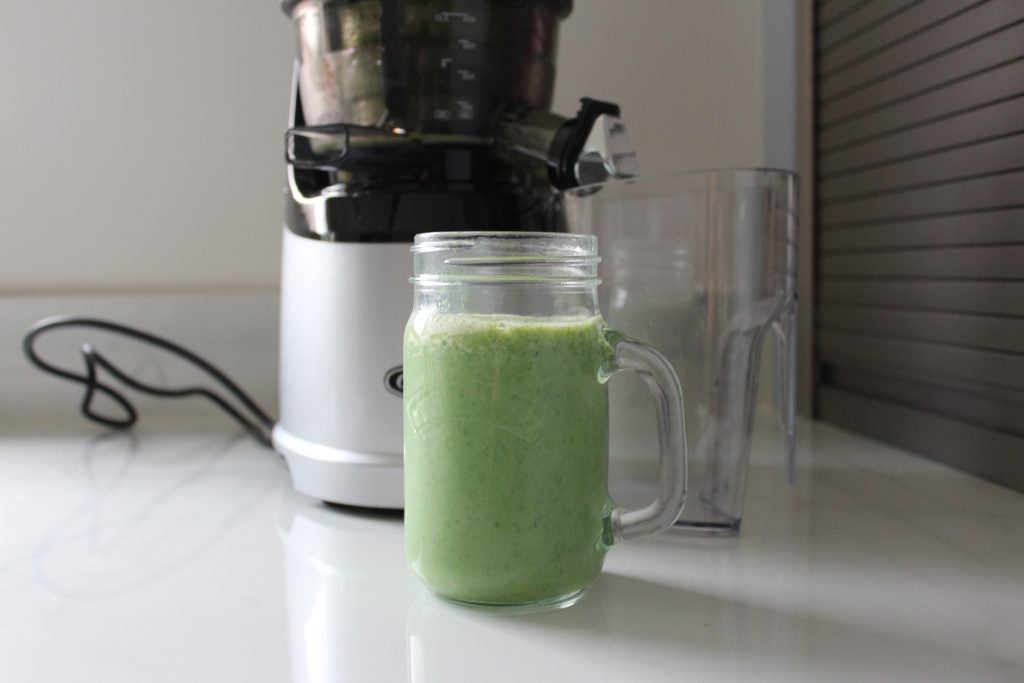 The amount of kit that makes up the MMV702 package is a double-edged sword. It’s great to have, but some form of storage box or bag would have been welcome. You’ll also have to make a commitment to cleaning the machine by hand for the best results over its lifetime.

However, if previous machines have let you down, producing masses of soggy pulp and barely a splash of juice, the MMV is sure to restore your faith. It’s super-efficient at juicing, and is likely to be a summer staple for healthy mocktails, sorbets, smoothies and gelato.

The ultimate in no-compromise juicing; this investment piece is worthy of its price tag.