What is the Ryze Tello?

The Tello is a small entry-level quadcopter made by Chinese startup Ryze Technology, in collaboration with drone king DJI. In conjunction with a smartphone or tablet running the Tello app, it can be flown for up to 13 minutes on a single battery charge, features a control range of up to 100m and transmits a 720p live video feed from its front-facing camera. 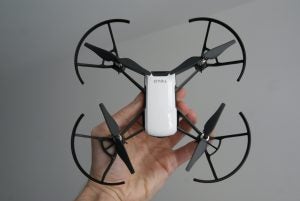 It can capture HD video or five-megapixel photos, as well as perform a series of preset “special moves” – including taking off from and landing on your hand. But is it the best toy drone around? For most people, it’s our favourite.

Compared to most drones we’ve reviewed, even the compact DJI Spark, the Tello is very small and lightweight: about 100mm square when viewed from above or below, and weighing just 80g.

Even with the included propeller guards attached (strongly recommended if you’re flying indoors, and probably worth keeping on at all times to prevent unwanted damage to the drone’s props, your home’s fixtures and fittings, and your fingers), it’s easily portable – tiny enough to slip into a small bag. 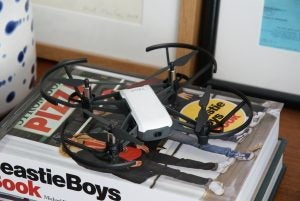 While the plastic used feels noticeably cheaper than the type used to make DJI’s drones, it’s certainly not substandard; its tough enough to survive a bit of rough treatment while not looking absolutely awful, which we think is more than sufficient in a drone that costs less than £100.

Batteries slide in and out at the back of the drone’s body, and can be charged via the microUSB port on its left side. This Boost Combo package also includes a separate charger able to accommodate three batteries, which you’ll probably find helpful if you plan on flying the Tello a lot – its batteries only last 13 minutes at best (more on that below).

On the right side, there’s a power button, while the bottom surface includes a pair of downward-facing cameras to aid in-flight stability. The tiny front camera is fixed rather than mounted on a gimbal, so its stabilisation comes via electronics.

Note that there’s no card slot for storing photos or videos, and the Tello doesn’t feature any built-in ROM storage either. Instead, photos and videos are transferring directly to the smartphone or tablet controlling the drone.

The Tello is a surprisingly stable and responsive flyer – in the right conditions. Basically – and Ryze itself admits this, to their credit – if there’s any wind outside, it’s probably a bad idea to put it in the air at all. Its lack of GPS-based return-to-home and its lightweight build mean it runs the risk of getting swept away by the slightest gust, and that could easily result in a lost Tello.

I decided to test it in my small, sheltered courtyard garden on a blustery day and almost lost it over the wall after a few seconds, so from experience it’s best reserved for indoor flight or outdoor flight in wide, clear spaces during calmer conditions. Here, its stability-aiding sensors keep it steady – it won’t drift around your living room in anxiety-provoking, cat-bothering arcs, but hover in place while maintaining a consistent height. 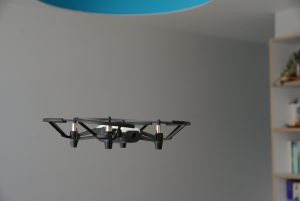 The Tello can be paired with a third-party Bluetooth gamepad controller if you want some real-life sticks underneath your thumbs, but I had a painless experience flying it via Wi-Fi using just my iPhone 8, the Tello app and its touchscreen controls.

In the app, tapping an icon starts the motors and lifts the drone to around chest height, and from then on you can fly it using the on-screen virtual thumb sticks, which are surprisingly responsive. The Tello shifts too – it has a top speed of 8m/s, which makes it fun to fly, and a great “first drone” for kids (and adults) looking for something to practice with before graduating to bigger, pricier quadcopters.

Due to its Wi-Fi connection, the very maximum range it’ll fly from the user is 100m – but in reality you can expect something more like 50m. 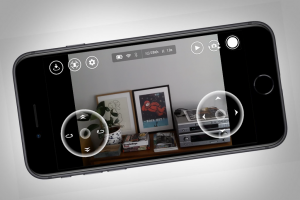 There are six flight modes available: 360 (where the drone rotates while filming); Throw & Go (where take-off happens when the drone is thrown up into the air); 8D flips (in which the drone flips in different directions depending on how you swipe your finger on the screen); Bounce (which automatically flies up and down – we can’t really understand why you’d use this one); Up & Away (records a video while flying upwards and backwards); and Circle (flies in a circle while recording a video).

Some of these can’t really be used indoors (unless you live in a palace, perhaps), but all work as advertised and some – the 8D flips in particular – are actually quite impressive.

The short battery life (up to 13 minutes, but more like ten in my real-world experience) makes the Boost Pack bundle’s (£139) inclusion of three batteries a real bonus. If you want to buy extra batteries separately, they cost around £15-£20 online.

A drone as small as the Tello can accommodate only a truly tiny camera, and that, coupled with the lack of built-in storage, makes its photo and video skills feel distinctly mediocre.

In bright lighting conditions, the 720p videos and 5-megapixel stills look acceptable – on the level of mobile phone footage from a few years back, perhaps. There’s nothing outstanding there, but things aren’t too noisy and the electronic image stabilisation keeps things surprisingly levelled out and far less likely to inspire a bout of nausea. Like the drone, the stabilisation can’t cope with excessive wind, so don’t expect miracles if things are getting gusty.

The main problem with the camera is not its quality, but the way in which video footage is stored. As the footage is captured, it’s transferred directly via Wi-Fi to your phone. In principle, this sounds like a smart idea – after all, it’s probably going to end up there anyway. In practice, though, it’s a major hurdle to getting good, slick video, as the quality of the stored file depends on the quality of the Wi-Fi signal. That means dropped frames and bad compression artefacts abound, or at least they did in all the videos I shot outside.

When it’s time to update the Tello, Ryze should really put a microSD slot in the second-gen model, because the current system doesn’t work well at all. Check out our embedded video to see why – and also for an idea of how the Tello holds up on a windy morning.

Given the price of the drone we don’t attach too much importance to its camera performance, though. If you pay this little for a drone, there are bound to be limitations; we’d hardly expect it to perform as well as a DJI Spark (£450) or similar, let alone the likes of the DJI Mavic Air or DJI Mavic Pro.

Should you buy the Ryze Tello?

If you’re looking for a real camera drone, this doesn’t fit the bill (and we’re sorry to say you’re going to have to spend a lot more money). But if you want a well-made tech toy that teaches you the drone fundamentals, is a blast to fly and features a bunch of interesting flight modes (throwing it in the air to launch it will make anyone feel cool), the Tello is just about perfect.

For the price, this Boost bundle feels like a bargain. This is a drone you can safely fly indoors or whizz around your back garden without constant fear of an expensive accident – and once you’ve mastered the basics, you can always upgrade to a pricier model.