The Roku 2 is the middle child in a family of video-streaming solutions that has the Roku Streaming Stick on one side and the Roku 3 on the other. It replaces the older Roku 2 XS.

It brings more than 1,400 streaming channels for you to enjoy on your TV. Unlike the Google Chromecast or the Roku Streaming Stick, the Roku 2 doesn’t require you to mess about with your smartphone to control it. Instead, it comes with a remote to take care of your cyber channel-surfing needs.

In all, the Roku 2 is a neat way of getting your Netflix, Now TV and YouTube fix on your TV with a minimum fuss.

The dinky Roku 2 won’t be challenging for design awards. It’s black, it’s plastic, it’s shiny and it’s small – the latter being the best thing about its looks. It isn’t as discreet as streaming sticks that are well hidden behind your TV, but it’s doesn’t leave much of a footprint – it’s smaller than Apple TV, but bigger than Amazon Fire TV – and can be squirreled away on a shelf or next to the TV without much notice.

The one flash of style and flamboyance comes courtesy of the iconic small, purple fabric tag stuck to one side featuring the Roku name. 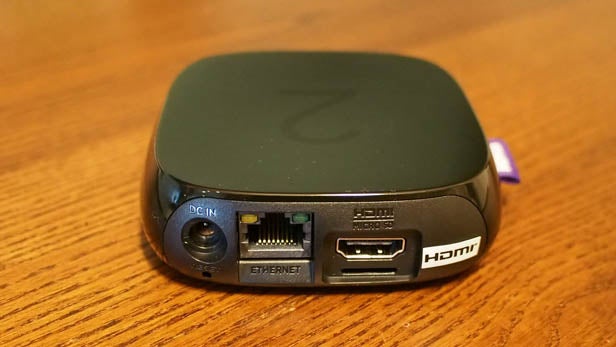 Round the back you’ll find the power socket, an Ethernet port, an HDMI port and a microSD card slot to expand the internal storage. It’s also possible to add to storage via the USB port, which sits around one side of the unit.

That’s a surprising amount of physical connectivity for such a small box. And while Bluetooth connectivity is missing, you do get a remote to help with setup.

The Roku 2’s infrared remote is surprisingly chunky considering its limited functionality. It’s a far cry from the slick metal remote provided with the Apple TV, but it does have some additional features, such as fast-forward and rewind. It does the job.

Let’s start with the buttons. You get a Home and Back button, much like Android, as well as a direction pad and OK button for selecting options. Just below this sit the play controls and four shortcut buttons to popular streaming services. In the UK the buttons act as short cuts to Netflix, YouTube, rdio and Google Play. In the US, the buttons are a little different. YouTube is replaced by Amazon Instant Video while Google Play turns into Sling. 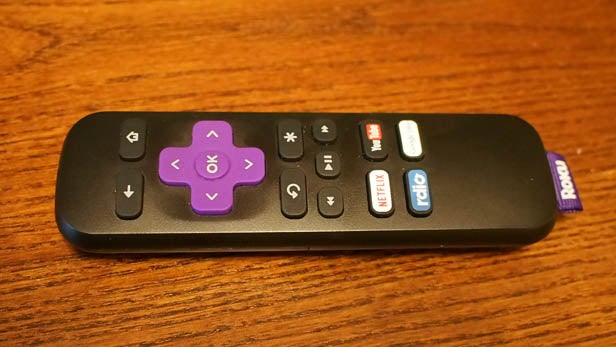 The shortcuts are useful, but not ideal. For a start, you can’t change them. This will be an issue for people that often use competing services. For example, I’m a big Plex user, but I can’t map that to a button.

The first Roku 2 we tested had issues with the remote. The field of operation was narrow so I ended up angrily pressing buttons and waving your arm around like you’re in a Harry Potter wand battle. Thankfully the replacement I was sent is a lot better. You still can’t point it at hugely acute angles like you can with most TV remotes, but as long as the Roku 2 box is placed sensibly you shouldn’t have any problems.

The remote is missing a feature that plenty of owners of the older Roku, and Roku 3, love – the headphone jack. On the Roku 3 this enables you to plug in a pair of headphones, so you don’t wake up the family if you’re having a sleepless night and want to binge-watch Daredevil all over again. Voice support, which is available on the Roku 3, is also missing.

The Roku 3 has remote pairing, another feature missing from Roku 2. This enables the enhanced remote to control the unit via Wi-Fi and infrared. As well as providing a more solid connection it also means you can use that remote sideways, like a gamepad. No chance of doing that with the Roku 2 remote.

Typing in your Wi-Fi password with the remote when you initially start using the Roku 2 is the most painful step in an otherwise slick setup procedure. Just a few screens of selections – including which apps you’d like installed – and you’re off. Simple. 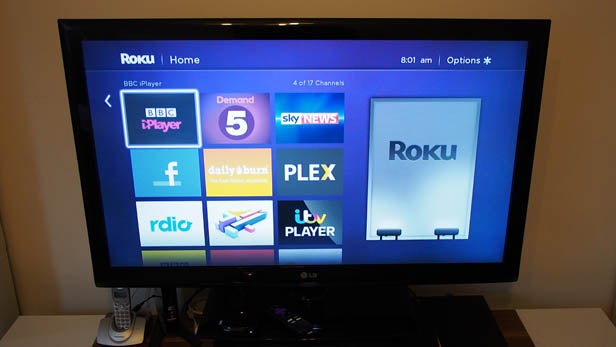 The sheer number of apps from which you can choose is mesmerising, and plenty are free – BBC iPlayer, YouTube, ITV Player and All 4 are just a small selection of what’s on offer. But the cream of the crop are the paid-for services, plenty of which are supported. Netflix is the most well known, although Now TV and Sky Movies are present too, alongside Spotify for your music fix.

The biggest omission is Amazon Instant Video, an app that’s available on the US version of the Roku 2, but not on the UK unit. Roku tells us it’s working hard to add more service to the Roku 2, but we’re not holding our breath on this one. Amazon is building its own ecosystem with the Amazon Fire Stick and Fire TV, so it’s unlikely to break a leg trying to support competitors.

And that’s an important point. Unlike Amazon, Apple and Google’s boxes, the Roku 2 is platform agnostic. It doesn’t push you towards buying services and products you don’t want or need, it doesn’t try to promote one app over another – it just gives you a truck-load of choice and lets you get on with it. It feels liberating and is something you should consider if you can’t stand being pushed into using one ecosystem – something Amazon is certainly culpable of.

If you have a library of your own content on a NAS server or PC, you’ll be pleased to hear that DNLA is supported. You can either use the native (and no-frills) Roku Media app for this or a paid-for service such as Plex.

But what of the most popular apps? Well Netflix looks and works a bit like it does on an Xbox One or PS4. You scroll through the appropriate categories and find what you want to watch, but it isn’t as comprehensive as the smartphone app that lets you filter by genres. Plex, on the other hand, works almost as well as it does on a smartphone or tablet. Like most streaming sticks and boxes, you can’t tinker with DNS or VPN settings – so you won’t be able to watch US Netflix in the UK, or vice versa, in the way you can on a laptop. 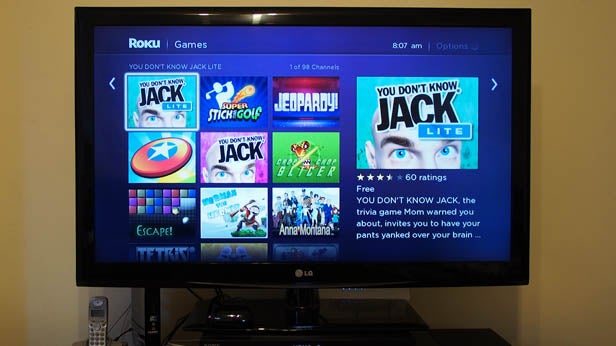 There’s a game channel too, but the less said about this the better. The 98 games available are basic at best and cost far too much. £1.49 for Solitaire, which was free on Windows 95 20 years ago? Thanks, but no thanks.

The final nail in the coffin of using the Roku 2 as a casual gaming console is the aforementioned remote. You can’t use it held like a gamepad because the top always has to face the box for it to function. If you want to play games then spend a little extra and go for the Amazon Fire TV box with the controller. 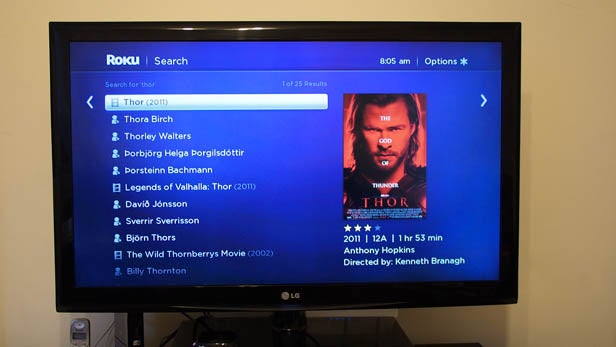 Another missed opportunity is Roku Search. This is plugged as a means to search across apps for content you want to watch, and would be an amazing addition if it was a true universal search function. But it’s not.

Currently only Netflix, SnagFilms and Popcornflix are supported. It means that if you want to find a movie on your server, or a series on BBC iPlayer, you have to go into the appropriate app and use the internal search there. Roku tells us it’s adding more apps to search soon. We can’t wait – search that works across multiple apps and locally stored content would be a killer feature for Roku and would make the Roku 2 a more attractive proposition.

There’s nothing worse than a lethargic TV box that takes ages to open apps and cycle through content. No such problem for the Roku 2. It starts up instantly and opens apps quickly and efficiently. We’ve experienced no slow-downs, stutters or long waits at all.

The Roku 2 purportedly uses the same dual-core 900MHz processor as the Roku 3, and as a result, the Linux-based box flies. It also uses just 2-5 watts of power when running, making it one of the most energy efficient ways of watching streamed content.

Streaming is also solid. During testing we had the Roku 2 in close proximity to our router, and we didn’t experience any long buffering issues whatsoever. If you have a newer router, you’ll also be able to take advantage of dual-band Wi-Fi. The Roku 2 supports both the older 2.4GHz and the more recent 5GHz standard. 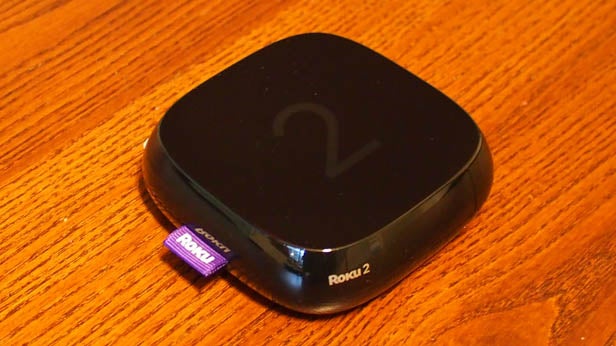 Take the Roku 2 further away and it still functions well. Placed in a room well away from a router – in a location where a Chromecast streaming stick sometimes struggles – the Roku 2 managed to stream Netflix in HD effectively.

The Roku 2 outputs in resolutions up to 1080p, otherwise known as Full HD. The lack of 4K might be a black mark against if for some, but it shouldn’t be. High-end 4K TVs are smart, which means you don’t really need a separate box to get all the streaming apps to them. The Roku 2 is meant as a companion for TVs that aren’t quite as clever, and is just right for a smaller bedroom TV.

You can cast to your TV from your phone using the Roku 2, but don’t expect this to offer all the bells and whistles that Chromecast or Amazon Fire Stick provide. Casting is limited to pictures, music and video stored on your phone and is still in Beta. Just install the Roku app on your phone – iOS, Android and select Windows phones are compatible – and off you go.

Windows 10 is also compatible, so you can share your laptop or Windows tablet screen to your TV using the Roku 2.

Should I buy the Roku 2?

The Roku 2 does the basics well and doesn’t cost too much, but you should consider it only if you really don’t like the idea of using your phone to cast to a streaming stick. These are cheaper, and core apps – such as Netflix and Plex – are arguably easier to use and more comprehensive via a smartphone app.

That said, the presence of your Netflix or Hulu account on a little box always connected to your TV will be a doddle for kids, grandparents and visitors to use, and will eliminate the need to tinker with phones or Wi-Fi settings. If that’s how you intend to use the Roku 2 then it’s one of the best options around, and a useful piece of kit barring the odd remote issue.

Alternatively, we’d recommend trying out a Chromecast, or Amazon Fire Stick. If you’re reading this from the US, you should note that Amazon Instant Video works on the Roku 2 there.

If you’re in the UK then you should also consider the Now TV box. This costs a fraction of the Roku 2, but is essentially the same hardware. App support is limited though – you don’t get Netflix or Plex.

If you have a little extra to spend then we’d recommend the Amazon Fire TV over the Roku 2. It costs around £20/$30 more, but is superior in a number of ways.

The Roku 2 works well, but lacks the unique features of its predecessor, or the Roku 3. If you just want a Netflix, YouTube and catch-up TV box then you won’t be disappointed. If you want more, then try the Roku 3 or Amazon Fire TV instead.