Plex is a piece of very powerful media streaming software for the home. Based on a fork of the XBMC framework (now known as Kodi), the software turns your personal computer or NAS into a media server that enables access to all your films, photos and music, from a multitude of devices via a beautiful and slick user interface.

If you’ve got a huge collection of media stored on your computer with no ideal way to access it around the home, then Plex is most definitely for you. 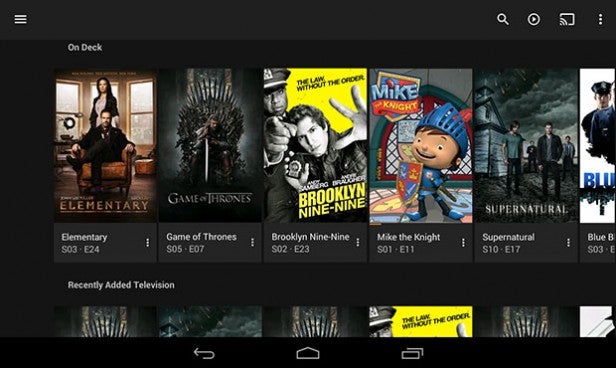 Once you’ve downloaded the Media Server, installation is a breeze. It installs quickly and walks you through the setup process. Plex detects your media once you’ve told it which folders to look in, and then separates the TV shows, movies, music and photos into their own categories. It also adds cover art and descriptions to each piece of content to make it look rich and beautiful.

In addition to the Media Server running on your computer, you’ll also need to install a Plex app on the device you wish to view your content on.

Again, this is super easy and the app will detect your media server within seconds. For this review we installed the app on a Tesco Hudl, Apple iPad Mini, a Moto G and an Xbox. All of them were dead easy to set up and get going.

Between the Plex Media Server and the Plex apps, someone wanting to
stream their media in a sophisticated, well-thought-out environment has
everything they need to get going. But for those of you that need a few
extra enhancements will need to consider subscribing to Plex Pass.

Plex
Pass adds even more glitter to the already crammed-in bells and
whistles. This includes the ability to download content to your device
for offline viewing, sync your content to Cloud storage as well as
getting to try out the latest features before any non-Plex Pass holders
can access them.

As a subscriber you also get to install the Plex
apps on nearly all of your devices for free, get access to movie extras
and trailers, enable Plex Home so you can create multiple user accounts
within your network and decide who gets to see what content (excellent
if you have children). You’ll also get access to Vevo music videos,
Gracenote Music Magic as well as a very nice photo sync feature that
makes sure all your photos are available across all of your devices.

SEE ALSO: Which is the best music streaming service?

The Plex UI is one of pure joy. It’s slick, easy to use and has all the information you could want, right at your fingertips. Seeing all your content presented with glorious cover art and metadata really makes your collection pop. You are, of course, free to choose whatever you want to watch or listen to, but, if you have trouble deciding, Plex has a few neat features to help you choose.

On Deck is a great way of keeping track of the shows you’re currently watching, as it will always display the next episode in a series so you can dive straight in. As soon as you open Plex, On Deck is right there with several of your most recently watched shows and movies ready to go. It also has a Recently Added queue, so you can get at your freshly added content.

And it doesn’t stop there. If you have a vast collection of TV shows, for example, you can head to the show section’s Discover list and see what aired recently, what’s in your queue, what series you haven’t seen yet, shows that you’ve seen but might like to watch again, or even shows that fall under particular genres such as comedy or horror.

Does this all sound too much? Well, it is a lot to take in when you first open the app. If you’re like me and just want to see what you’ve got, you can head straight into your library and Plex displays all of your content, complete with Unwatched icons so you can easily see what you have or haven’t watched yet. This feature is particularly handy for keeping track of where you’re up to in a TV series.

Plex will also track your progress in a video file, so if you have to close the app down for any reason, you can always pick up where you left off.

There are plenty of other features as well, like the ability to create your own playlists, invite other Plex users to view your content, recommend content for others to watch, add movies and shows to a Watch Later queue, as well as the option to install a ton of channels like BBC iPlayer, YouTube, the History Channel and loads more.

The settings are easy to navigate and give you lots of options that will allow you to tailor your Plex experience to suit your needs. One of the most powerful options is to enable web streaming, so you can view your content anywhere at any time over your mobile data connection. 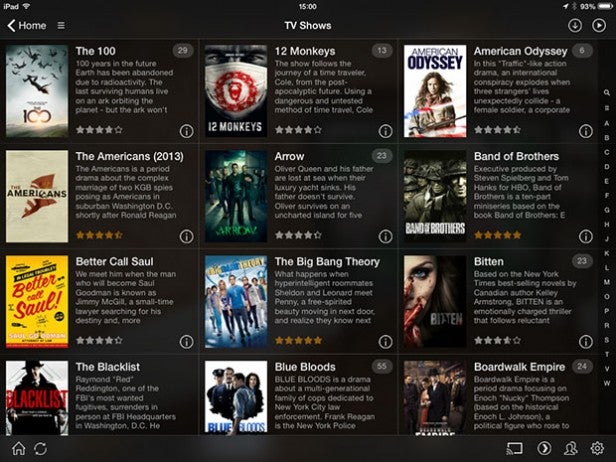 The iOS Plex app is a little more cluttered than the Android app, but it’s still a joy to use

Plex is an incredibly versatile Media Server that can cater for a vast selection of format types. Yes, we know it can stream movies, music and display photos, but what formats should you use? When it comes to video, the MP4 and AAC Audio combination works best. These file types are supported natively and play perfectly with Plex, but that’s not to say you need to convert other file types in order to use them. Plex can automatically transcode – or Direct Stream, as Plex calls it – almost any other file type as and when needed. MKV, AVI and MPEG can be played without any bother.

Music support is limited to MP3 and M4A, but an upcoming release will see support for FLAC and ALAC added.

As for image support, the chances are that you’ll be viewing JPGs, but for any budding or even professional photographers, you’ll be pleased to know that RAW is also supported. 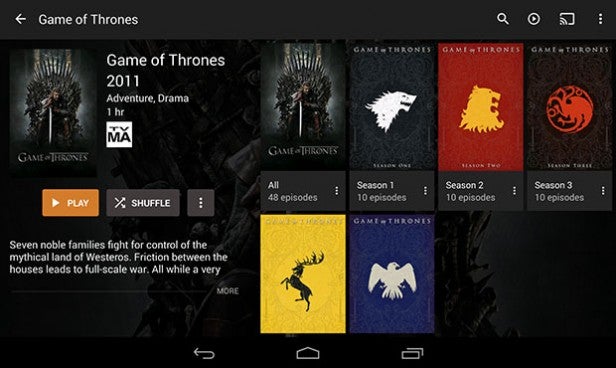 The Plex Media Server is very lightweight and can run on a fairly low-spec machine. A 1.6GHz Core 2 Duo with 1GB of RAM is the minimum requirement to get going and this will serve OK for most users. Plex recommends you have at least a 2.4GHz CPU with 2GB of RAM, but those of you who don’t want to risk sitting through 30 seconds of buffering or getting a dropped frame or two will want to be rocking at least 4GB of RAM server side.

As you’d expect, the performance of Plex largely depends on your home network speeds and how big your files are. If you’ve got an old router with a short signal reach and low speeds, you’ll most likely have a lesser experience compared to someone with the latest router tech. And if you only deal with 1080p videos, those will obviously take a little longer to process. That said, Plex seems to play well on connection speeds starting at 10Mbps. The faster your network speed, the better the stream is. You can, of course, tweak your playback settings and opt for your content to be served at a lower resolution to improve performance, should you need to.

Plex is pretty clever at working out what device you’re viewing on as well, so if you’re trying to stream a 1080p movie over a 3G connection, Plex will do some trickery to deliver the file to you as fast as possible while trying to retain the best possible resolution. 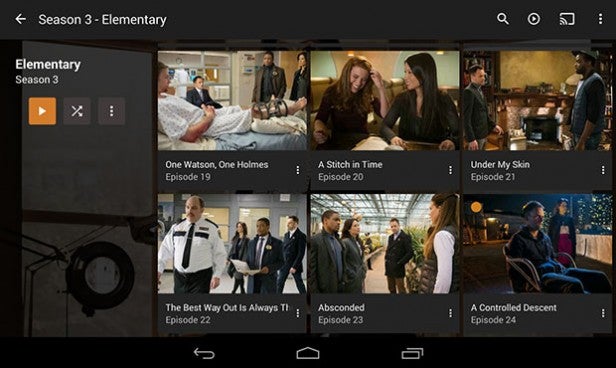 Plex supports a plethora of devices. Most computer operating systems are supported, such as Windows, Linux and Mac OSX – the latter of which was the first platform Plex was developed for – but there are loads of other devices you can view Plex on as well.

These include Android, iOS, Windows 8 and 8.1 devices, Chromescast, Roku, Amazon Fire TV, Samsung Smart TVs, GoogleTV enabled HDTVs, and games consoles like the Xbox 360, Xbox One, PS3 and PS4. That’s a lot of devices and you probably already own at least one of them.

One device that is missing from the list of supported devices is the Apple TV. This isn’t an oversight from Plex, but rather the lack of support from Apple. The Apple TV ecosystem is currently an invite-only affair, so until Apple throws Plex a bone – and Plex has openly said it’d love for this to happen – there’s no legit way to get Plex on the little black box. There are ways around it if you don’t mind jailbreaking the device, but we wouldn’t bother.

As far as pricing is concerned, the Plex apps do come with a one-time purchase price tag – usually around £3.99 – but this can be wavered if you sign up to Plex Pass. 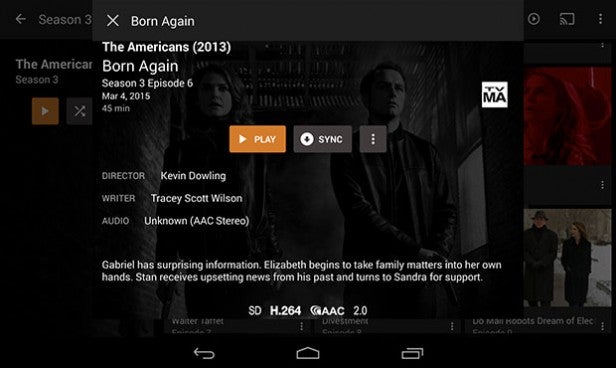 As
you can see, every menu is acompanied with beautiful artwork and lots
of information about the file, show or movie, and it’s all done for you.

Plex is the home media server solution that anybody can, and probably should, use. If you have a collection of movie and TV shows sitting on your computer with no way to access them, other than sitting in front of you monitor, Plex is what you need. You can then view those files on any device from smartphones to consoles or even across the web, all in a beautiful, stylish and easy-to-use interface.

Provided your home network wasn’t set up in the ’90s and your computer meets the minimum requirements, Plex will not disappoint and you’ll soon be wondering how you got by without this clever media server in your life.