What is the Roku Streaming Stick?

The Roku Streaming stick is an HDMI dongle that plugs into an HDTV and with its built-in wireless connectivity gives you access to a host of streaming channels including Netflix, BBC iPlayer and Now TV. Far from newcomers to media streaming this is simply Roku’s smallest device yet and is clearly a response to the arrival of Google’s Chromecast dongle.

While it’s marginally more expensive than Chromecast, Roku’s streaming stick currently has a bigger selection of channels, a bundled remote and some Chromecast-style mirroring capabilities. It’s one of the easiest and cheapest ways to make your TV smarter with little fuss but Chromecast might be the one with the greater potential in the future. 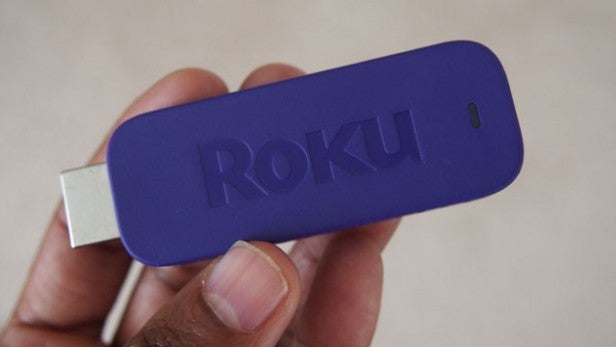 The Roku streaming stick setup comprises of the dongle with a HDMI port that resembles a memory stick, a micro USB charging cable, power adaptor and remote control with two AA batteries supplied. The dongle does have a worryingly cheap feel to it and it wouldn’t be surprising if an accidental drop on a hard floor from height wouldn’t cause it some damage.

The remote control is near identical in look to the one that comes with the Now TV box opting to stick with the purple and black Roku colour scheme that runs through the rest of the streaming hardware range. On the glossy, piano black top lies buttons for going back to the home screen, a D-Pad to scroll through menus, an instant replay button that rewinds the last seven seconds, OK button, Play/Pause, and skip back and forward buttons. It’s a dinky little thing and very light to hold but one thing really missing from it is some form of volume control so you abandon the main TV remote.

The Roku dongle weighs an ultra light 18g making it lighter than the Chromecast (34g) however these marginal weight differences seem insignificant for something that simply plugs into a spare HDMI port in your TV. What’s more vital is the flexibility to fit it. Unlike the Chromecast, there’s no bendy HDMI extender cable included which can come in handy if your TV is mounted on a wall and HDMI ports lie in a more challenging position. You’ll also need to have a spare plug nearby as the streaming stick has to have external power although if you have a TV with a USB port, it can be powered through the TV instead as well 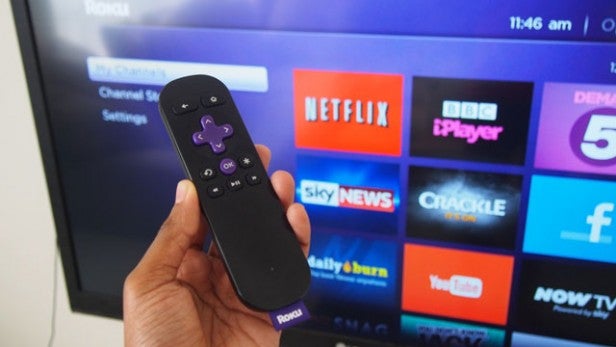 Plug and play this might well be but you’ll still need at least 30 minutes to get watching. After plugging in the dongle and the power supply, you’ll need to set up the internet connection. Roku claims an internet connection ranging from 1.5MBs upwards will be sufficient to run standard definition content and 3.0MBs upwards to play Full HD content. If you’re not sure there are speed test apps, such as speedtest.net, which you can use to check whether you meet the requirements.

Next, you need to grab a smartphone or laptop to link the account. This requires entering credit card details and address information and you can’t proceed until this is all stored. The information is used to make purchases in the Channel Store and if you are worried someone might make accidental purchases, there’s the option set up a pin security code.

The Roku streaming stick will then take the opportunity to search for the latest software updates and once the system has restarted it’s time to have a look around. To help get better accustomed with the Roku streaming service, it already suggests the most popular free channels like Netflix, BBC iPlayer and subscription-based Now TV.

Installation times vary from thirty seconds to a couple of minutes. Once that’s done and as long as you are on the same Wi-Fi connection you can simply plug it into another TV in the house and it’s ready to bring streaming content. If you want to carry it around with you, the process is not quite as straightforward as going to someone else’s house, plugging it in and continuing to watch. You will need to jump onto the new internet connection but in our attempts the interface simply froze and the remote control was unresponsive. 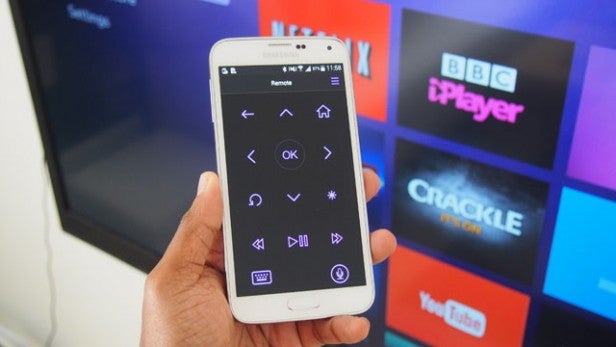 While it’s great that Roku includes a remote, should the dinky control go AWOL you do have a back up in the shape of your smartphone or tablet. The free Roku app works with Android devices running Android 2.1 or above and iOS devices running iOS 6.0 and above. Continuing the purple on black theme, all the controls on the physical remote are replicated with a couple of extra features.

There’s voice search so you can call out a channel and the Roku streaming stick will launch it. It’s slow to jump into action but the voice recognition didn’t fail on any occasion when we tested it on the Samsung Galaxy S5. Additionally there’s the ability to use the keyboard on your smartphone or tablet which comes in handy when you need to type in login details for services like Netflix. 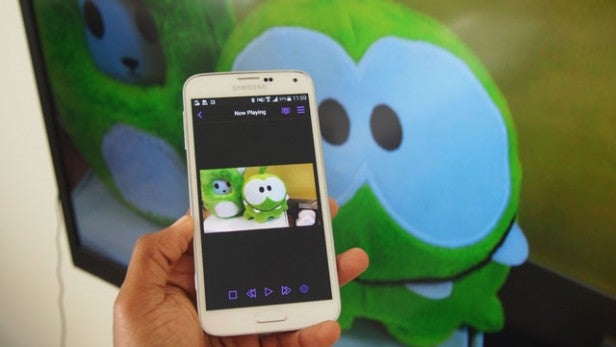 In the top right hand corner is a drop down where you can move from Remote view to look at ‘My Channels’ the ‘Channel Store’ and send content to the Roku from your phone: specifically music and photos. The music has to be stored on the device so it won’t play directly from a third party app like Spotify. Photos simply opens up all available photos on the phone or tablet allowing you to skip through them. You can control slideshow speed and choose how photos transition from one to the next. Last up, is Settings which replicates all the ones available on the main interface.