Introduction
The easiest way to explain Rocksmith is that it takes the guitar game to its logical conclusion. There are no plastic guitars, no brightly coloured buttons, no temporary score boosts or dazzling career modes. There are no caricatures of players, no Sting, Hendrix or Kurt Cobain, and no facilities to go online and join a band. Instead, it’s a game where you play real songs on a real guitar, to the extent that while your making progress on your ‘journey’ and building your score, you’re effectively learning how to play. In fact, Rocksmith could be described as a learning tool concealed within a game.

Of course, we’ve seen this before with Rock Band 3 and its Pro mode, but where Rock Band 3 asked you to buy a modified Squier Stratocaster or hybrid Fender Mustang controller if you wanted to play, Rocksmith will work with any guitar with a standard quarter inch jack. In other words, it’s time to dig out that old Les Paul clone you bought back when Guns ‘n’ Roses were cool or the pointy Ibanez you purchased while in the thrall of Satriani and Steve Vai, plug it in and make some use of it. It also has a full bass mode, so fans of Flea, John Entwistle and John Paul Jones are just as well catered for. And if you haven’t got your own guitar, Rocksmith is also available with a rather basic Epiphone Les Paul Jnr at a bargain basement £125 – and that’s a guitar you can keep using even when the game has run its course. All connect to your console via a robust 3.5m cable with a built-in analogue-to-digital converter and a USB plug.

The meat of Rocksmith is in its journey mode, which takes guitarists, or bassists, through a series of songs, which you rehearse in groups of two to four before playing them in a single live performance. This is where things get clever. As in Rock Band or Guitar Hero notes scroll down towards the bottom of the screen, and it’s up to you to hit the right note at the right time. Of course, here the display covers all six guitar strings, and the indicators show which colour-coded string and which fret you need to play at. 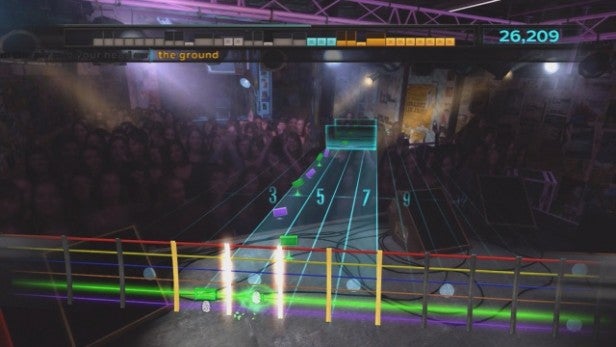 Rocksmith Gameplay
The smart part is that Rocksmith starts off with just the basics of a song – key notes, simplified riffs, the occasional chord – and watches how well you get on. If you’re doing well, it starts adding elements, throwing in more notes, filling out the riffs and adding grace notes, bends, slides and more chords so that what you’re playing is closer to the real guitar part. If you’re struggling, however, it takes things back down towards the more basic level. What’s more, songs come in three possible arrangements, with a single note arrangement, a chord arrangement and a combo arrangement with a bit of both. As you progress through the game you’ll be expected to master all three, by the end of which you have pretty much mastered the actual song.

The joy of this is that you can start off with only a few basic notes, focussing on the timing and the most basic structure, but before long you’ve got the riff to Satisfaction or The Black Key’s Next Girl, and after a while you’re playing chords and even solos too. Little animated clips introduce new techniques, like sliding down the fretboard or bending notes up a semitone or two, and before long you’re getting the hand of hammer-ons, pull-offs and the rest. If you expect to start Rocksmith unable to play Louie, Louis and end it playing Van Halen’s Eruption, then you’re probably expecting too much, but it does give you a real chance of learning core guitar skills and – more importantly – real songs, then you will get quite a lot out of it. 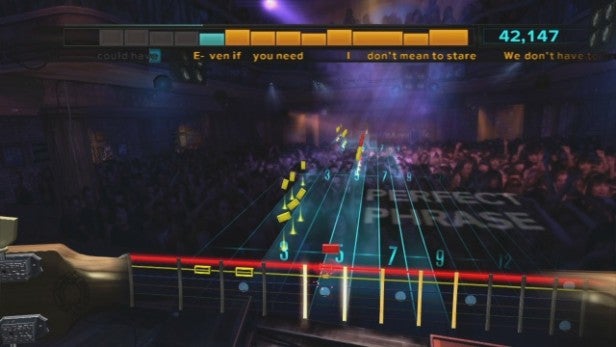 At times it will be hard going. The scrolling display isn’t actually that intuitive, and you’ll find yourself struggling with a sudden chord or fighting with a tricky lick, and wondering how on Earth you’re meant to crack it. Help comes in a couple of forms. Firstly, scroll right when the Rocksmith Recommends prompt appears at the end of the song and you can select to try exercises that help you practice techniques being used in the song, or short sequences that test you on a particularly challenging passage, giving you a chance to master that section before going back to the full song.

Secondly, Rocksmith has its own Guitarcade – a series of unlockable arcade games designed to help familiarise you with the display and the game mechanics, and let you work on your timing, your accuracy and your techniques. These are addictive and fun in their own right, with online leaderboards and escalating difficulty levels, but all the time you’re playing them you’re getting better at playing Rocksmith, and so better at playing the guitar. 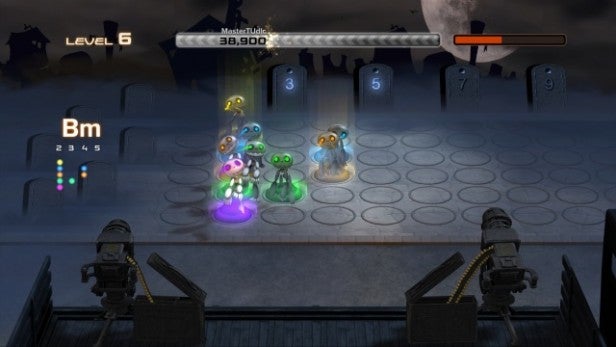 Here’s the good news, then. Rocksmith works, and it can and will make you a better player. Some might point at the tracklist and complain that there could be more vintage rock classics or more modern tracks, but the fact is that the tracks chosen do an excellent job of getting you playing, boosting your confidence and helping you on to the next step. And if you look, there’s enough stuff from The Black Keys, Jack White (in Dead Weather and White Stripes modes) and Muse, plus tracks from Nirvana, Radiohead, Blur, Bowie, Soundgarden, Stone Temple Pilots, Sigur Ros, Lynyrd Skynyrd, Lenny Kravitz and The Horrors to cover a pretty broad range of material.

We also love the amp mode, where you can unlock new guitars, amplifier models and effects pedals and turn your Xbox 360 or PS3 into a virtual setup for a bit of practice. Not everyone can own a Les Paul gold top or a mid-1980s Explorer, so it’s nice to hear your own ropey knock-off transmogrified, even if the accuracy will depend on the quality of your TV speakers, headphones or surround sound system. 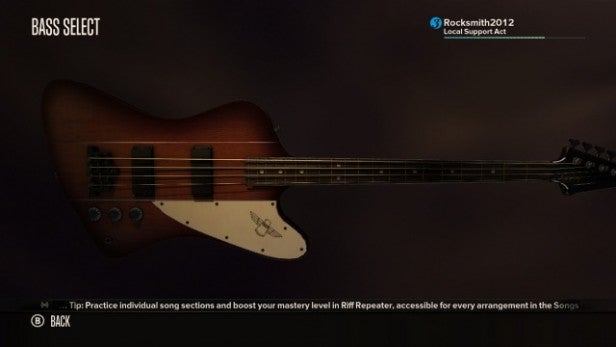 All the same, there’s plenty we’d like to see worked on in a sequel. We’d like to see more tracks, better features to introduce chords and riffs before you come across them in a song, and more facilities to replay specific sections if you’re struggling with them (a bit like the ‘Break It Down’ feature used to help you with isolated moves in Dance Central 2). We’d also like a bit more atmosphere. This isn’t a Rock Band game, and we’re happy with the fairly straight guitar/bass multiplayer options, but Rocksmith’s rather basic presentation means it doesn’t have the authentic gigging feel of Rock Band or the rock god lunacy of Guitar Hero. It’s all a little bit po-faced.

Rocksmith Lag
And we still haven’t confronted the biggest issue facing Rocksmith – latency. On some TVs, particularly those without a game mode or where a lot of image processing takes place, there’s a noticeable delay between screen and sound that makes it hard to hit notes on target. To be fair, this isn’t entirely Ubisoft’s problem, and there’s a guide in the box explaining what the problem is, and how to combat it (by feeding an analogue output from your console to an external speaker system, and not using HDMI for audio). 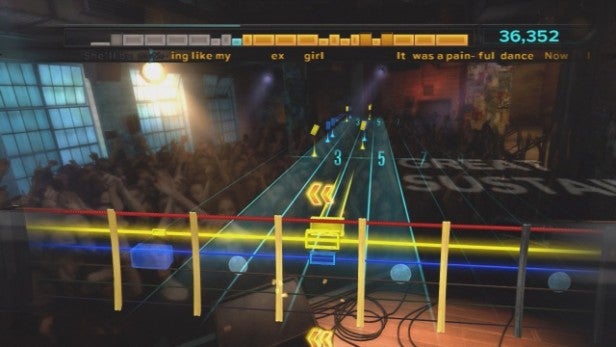 Here your mileage will vary. In our case, on a budget Panasonic plasma with game mode activated, there was barely any lag to speak of, but from forums we understand that we’re fairly lucky here. If you’re affected, Ubisoft’s recommended workarounds are a bit of a faff, and might put you off playing the game. All the same, it’s not that much of a faff, and if you want to learn and play guitar, it’s definitely worth it.

Rocksmith Verdict
An impressive learning tool disguised as an entertaining game. The interface isn’t always clear and we’d like to see more options to help players tackle tricky parts, but Rocksmith really does bridge the gap between guitar game and learning to play a real guitar, and you can have a lot of fun while you’re using it. Lag will be a major issue for some players, and the prescribed workarounds are fairly clumsy, but once you get it all working Rocksmith is a treat for frustrated axe heroes.