Introduction
Rock Band Blitz is not the Rock Band you might know and love. It’s played with a standard DualShock 3 or Xbox 360 controller, with no plastic instrument peripherals in sight. All the trappings of Rock Band – building a band, playing venues, working your way up the pile – are pretty much gone. Musicians, licensed guitars and concert footage backgrounds are out, and everything is stripped back and streamlined to the core of a rhythm action game. Rock Band Blitz is all about the score – nothing more. In a way, it’s Harmonix returning to its roots, and it’s not hard to join the dots connecting Blitz and its pre-Guitar Hero hits, FreQuency and Amplitude. 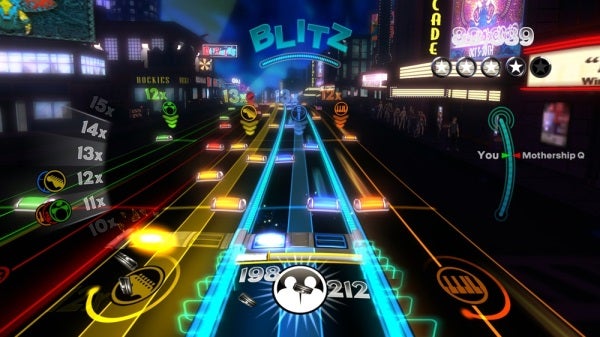 All that said, it’s not an entirely alien beast. The display might be a bit familiar. As a song plays, five tracks scroll towards you, each representing a separate instrumental or vocal part. The markers on the track correspond to the notes or beats in the song, and it’s your job to press a button at the exact moment that the marker hits the indicated point. Here, however, Rock Band Blitz deviates from previous Rock Bands. You only have a choice of two buttons to hit, putting the emphasis almost purely on timing rather than getting the right note, and you’re not merely expected to play one part but all of them, switching from one to the next with a quick squeeze of the left and right shoulder buttons.

Build that Bonus
The idea is to hit the notes required to build a bonus multiplier for that instrument, then switch to the one that needs help most, shifting from guitar to vocals to keyboard, bass or drums as required to ensure that no one track is being left behind. The background of the track fills with colour as you build, and getting all tracks filled before you hit the next checkpoint increases the maximum multiplier you can get in the next section of the song. Hitting checkpoints also resets things ready for you to start building again.

In a way, Rock Band Blitz is very generous. You can’t fail a track or lose your bonus just by fluffing notes, and it’s only when you’re particularly good on a certain part and the game speeds up into the high-scoring blitz mode that every note counts, as dropping one knocks you straight out of it.

In another way, though, Rock Band Blitz is pretty tough. Simply getting the hang of the core mechanics takes time, and some tracks are an instrument-juggling nightmare, as you struggle to keep building those multipliers across so many tracks with so much going on. At the end of the song you’re rated on your performance and placed on the global leaderboard, and while getting one to three stars is easy, hitting four or more gets progressively more difficult. 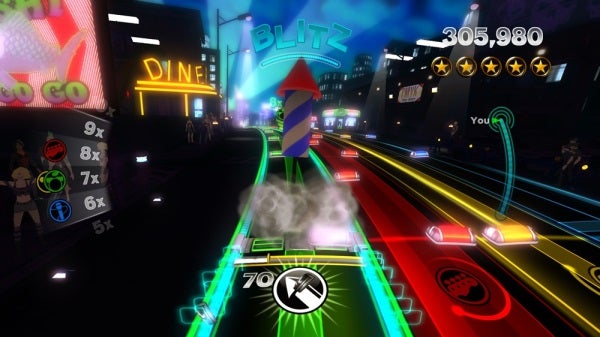 Boost your Score
Knowing the song, and when to focus attention on one instrument is one way to get a better score. There’s nothing worse than having ignored the vocal track for a huge chunk of song then realising you’ve hit the instrumental outro. When it comes down to it, Rock Band Blitz is all about hitting the song again, trying new strategies, and hoping to polish what went right last time. In other words, it’s your classic high score attack game.

To give you a better chance – and add an extra wrinkle to the game – completing songs earns you ‘cred’, and this unlocks power-ups. These make it possible to boost your scores and multipliers to new and unseen levels, with effects ranging from simple time-limited bonuses to notes that explode and trigger those around them and flaming trails you must pursue, to additional score bonuses for skipping from track to track in time with the beat. Using bonuses is key to reaching the higher places on the online leaderboards, so you need to think carefully about what power-ups to use and when.

It’s hard to know what to make of Rock Band Blitz. The change of style risks being divisive, and at the end of the day not everyone gets a score attack game. Most importantly, while its clever, well-balanced and hideously addictive, so much will depend on whom you’re playing it with, and what music you’re playing it to.

For a start, it’s a game that thrives on competition, and while it’s nice to know that you’ve the 10th highest score in the world for playing Hall and Oates’ Maneater, or that only 13 other people can take you on Fun’s We are Young or Yes’s Owner of a Lonely Heart, it’s a lot more interesting to know that you’re ahead of some bozo you actually know. Secondly, while the game comes with three tracks and a free 2x-strong pack of songs to download, the selection is pulled too thin across too many genres to really satisfy anyone. If you were stuck with the Rock Band Blitz soundtrack, then Rock Band Blitz probably wouldn’t knock you out or even last you all that long. 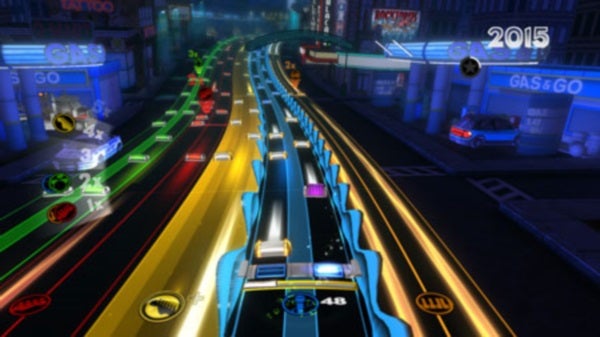 Pay to Play
The trick, of course, is that it works with existing Rock Band tracks or any tracks you’ve previously downloaded, which is good news for long-term fans. What’s more, there’s a built in browser to go to the online Rock Band store and find and download more. Were we more cynical, we might suspect that Rock Band Blitz was being sold inexpensively through PSN and Xbox Live Arcade because Harmonix sees it as a vehicle for prolonging Rock Band download sales. Even if that’s not the case, you can see how it might end up working that way. The compulsion to add to your collection is extremely strong, and the game actively rewards you for playing with new tracks.

Still, if it turns out to be an expensive habit then it’s worth it, because playing Rock Band Blitz with music you already know and like transforms the experience. There’s always something about the synergy between music, graphics and gameplay in a great music game, and Rock Band Blitz has it in spades.

In fact, it even works with music you already know and don’t like. Your humble correspondent had fun building high scores in the Red Hot Chilli Peppers’ Give it Away and Queen’s Death on Two Legs, but then began an assault on the leaderboards with Maroon 5’s execrable but catchy Moves Like Jagger. It was still fun. A quick burst through DLC tracks, including Hall and Oates’ Private Eyes, Yes’s epic Heart of the Sunrise and Nirvana’s Heart Shaped Box proves that the magic of Rock Band Blitz isn’t limited to the bundled tracks, either. 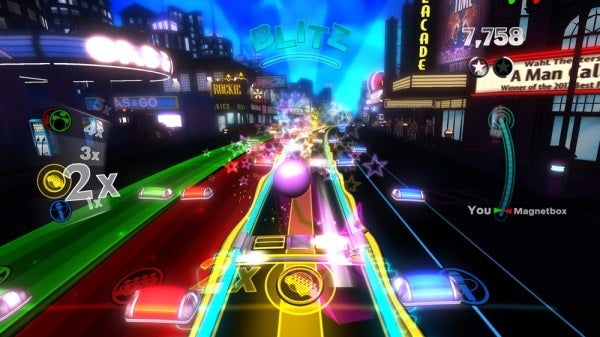 So, this isn’t Rock Band as you might know and love it. You’re not rocking it out with a plastic guitar or locking tight with other players in a band, and that was always a huge part of Rock Band’s alchemy. Were this a full blown sequel rather than a budget download we might also be making more grumbling noises about the track list, while suggesting that the social gaming aspects could be a bit more active; if ever a music game called out for the equivalent of Need for Speed’s Autolog, this game is it.

Yet Rock Band Blitz works brilliantly as a high score game, and as a new way to enjoy and interact with music. You might lose out a little on depth – though Rock Band Blitz has more than you might think – but you gain on accessibility. There’s no ladder to climb or set list to unlock, just you, your songs, and the promise of a better score next time. With a game as good as this, that’s all you need.

Verdict
A successful arcade spin on Rock Band. The score attack approach won’t be for everyone, while hardcore fans might miss their plastic instruments and the old games’ authentic rock band feel. But judge Blitz on its own merits and it works brilliantly, both as an arcade game and a music game, even if it only really comes alive when you add or invest in favourite Rock Band tracks.