What is the Roccat Tyon?

Roccat calls the Tyon the next evolution in combat gaming peripherals, and it has a pretty strong claim for saying so. It is in essence just a high-end gaming mouse with masses of buttons but unlike some many-buttoned mice we’ve seen before all the extras here are thoughtfully positioned and serve a distinct purpose.

Straight out the box the Roccat Tyon comes across as a typical muted grey and black high-end gaming mouse. It’s clearly busy with buttons but the simple two-tone design and choice of contours has an appeal to it. Even the Roccat logo manages to not fall into the trap of looking a bit cheesy. All told it’s a clear step up from the disjointed design of the Logitech G402, for instance. 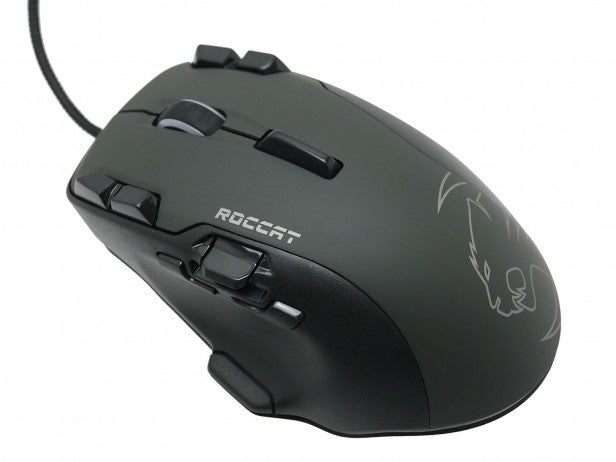 However it’s when you plug this mouse in that its design steps up a gear. Now, mice have long had lights in them to add a bit of bling but here they’ve been used to great effect. As well as an illuminated scroll wheel there’s a thin strip of light that runs round the whole base of the mouse. It gives the effect of the mouse floating on a bed of light (an effect greatly enhanced if you have a black mousemat) – it just looks cool. 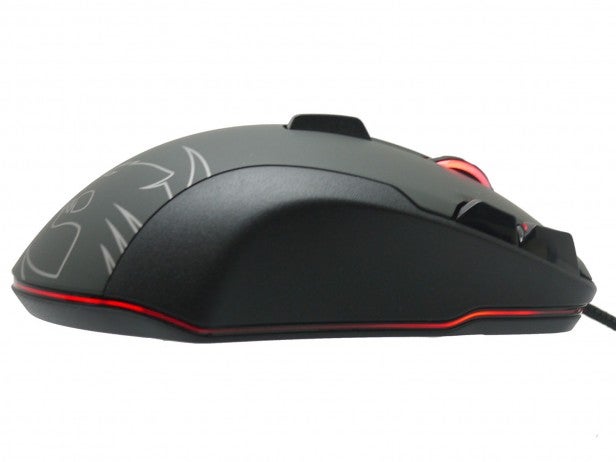 The lights can also be changed to any colour you like and can be controlled independently. You can also assign some basic animations to the light, such as a blinking or breathing effect. Much as with many of these lighting schemes, it’s all a bit frivolous in the end but we certainly found ourselves enjoying the show every once in a while.

It’s a shame the black sides aren’t finished in either soft touch plastic or rubber. Instead they use a hard, rough finish that’s not quite as grippy and doesn’t feel as nice as other gaming mice on the market.

Otherwise the overall contouring is very good. Clearly it’s not an ambidextrous design but the long, gently sloped shape lends itself well to both palm and finger grip techniques, with enough height in the central section to offer some support to the palm.

Button placement is also excellent, even for all those extra ones. Left and right click offer a very sharp response and although they’re a little hemmed in by the two sets of buttons to either side we never mistakenly hit those other buttons thanks to them being well raised out the way. 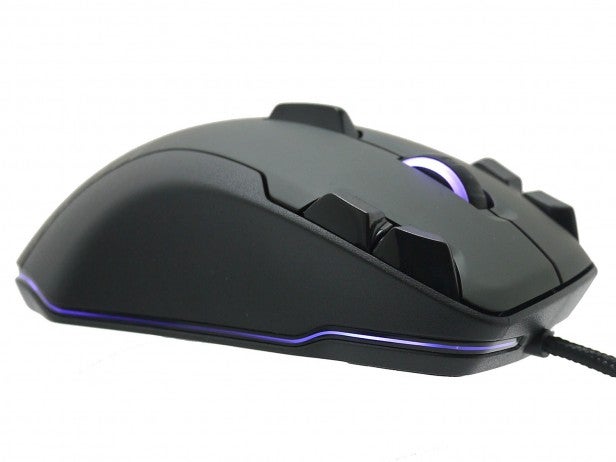 The scroll wheel is of the lightweight – not free-scrolling – variety with a nice thick and grippy rubber finish and well defined notches, for accurate adjustment. It’s also effortless to tap for a middle click.

The other familiar buttons are the back and forward ones that sit under the thumb. Again these are perfectly positioned so that they’re out the way enough to not be accidentally hit but are instantly reachable.

It’s easy to get the standard buttons right, though. What’s more challenging are all the extras, of which this mouse has quite a few. First up are the DPI switching buttons (all the buttons can be reassigned but some have default actions). These sit to the front left where they’re really easy to reach and quickly adjust with your forefinger.

On the opposite side are a matching set of buttons for activation with your middle or ring finger. Again they fall perfectly into place, though it’ll probably take a bit more training to be accurate with them as it’s a bit of a stretch for the middle finger and the ring finger tends to be less well trained in such button clicking dexterity.

Next up we have the so called dorsal fin switch, that sits behind the scroll wheel. This thin, raised switch sits under the bottom joint of your middle finger and can be tapped left or right. It’s a really clever addition as it manages to not be easy to accidentally activate but yet is effortless to use when the times comes, without any shift in grip required. 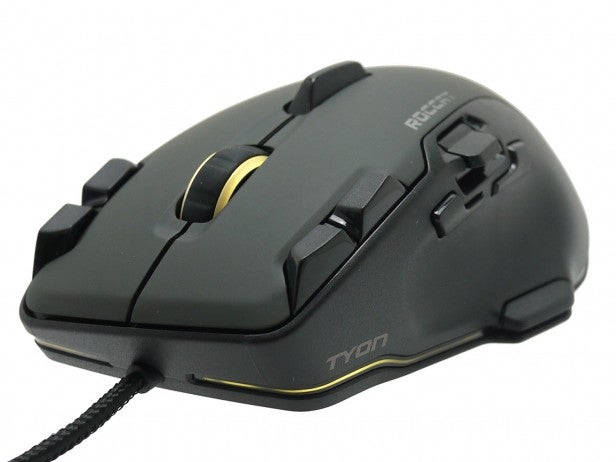 The X-Celerator is the fancy name given to the next new addition. It’s an analogue input device that allows for fine linear control of things like the height of a helicopter or the angle of a tailplane. It sits just above the back and forward buttons where it’s easy to access with the thumb.

Finally there’s the Easy-Shift button, which is situated below the thumb and activated with a downward press of the left edge of your thumb. This is (again by default) used to alter all the other functions of the keys – essentially it’s a profile toggle button. The positioning is such that it’s really easy to tap and still have access to all but the back and forward buttons and the X-Celerator, giving you access to 11 more alternate button functions.

We’ll talk more on how all those buttons come together in the performance section later on.

Rounding out the list of features, this mouse connects to your PC with an ample 1.8m cable that’s also braided.

As for the internals of the mouse, it’s right up there with the best. The laser sensor can register up to 8200dpi, deliver up to 1000Hz polling rate and 1ms response time, record at 12000fps, cope with 30G acceleration, track movement speed of up to 150ips and offers adjustable lift distance. All this is powered by a 72Mhz 32-bit ARM processor and 576kB of onboard memory.

The only thing it ‘lacks’ is the unique gyroscope of the Logitech G402, which allows that mouse to keep pace at speeds of over 500ips. However, as we showed in that review we could seldom exceed even 100ips while testing, let alone during actual gameplay, so we have no doubt the Tyon will track perfectly well. 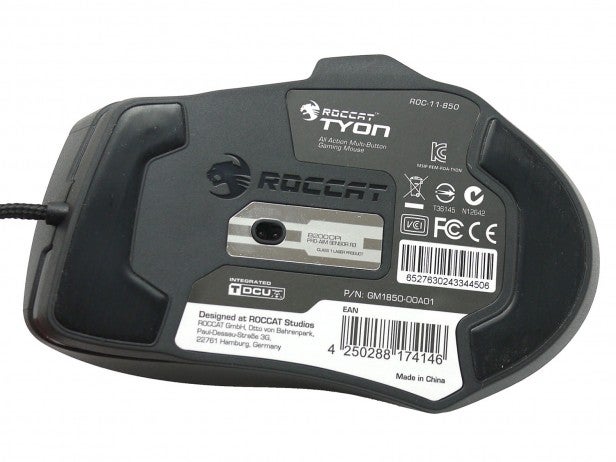 As with most such high-end gaming mice, basic installation is a driver-free affair – you can plug this mouse into any PC and its basic functions will just work. However to get the most out of it you’ll need to install the driver.

The Tyon software is for the most part very well put together. It’s clearly laid out and intuitively sectioned off making it easy to wade through its vast number of features. It lets you change all the standard performance settings – sensitivity, scroll speed, polling rate, lift distance etc – as well as some more unique ones such as fin switch tilt speed, number of DPI options, X-Celerator sensitivity and more. 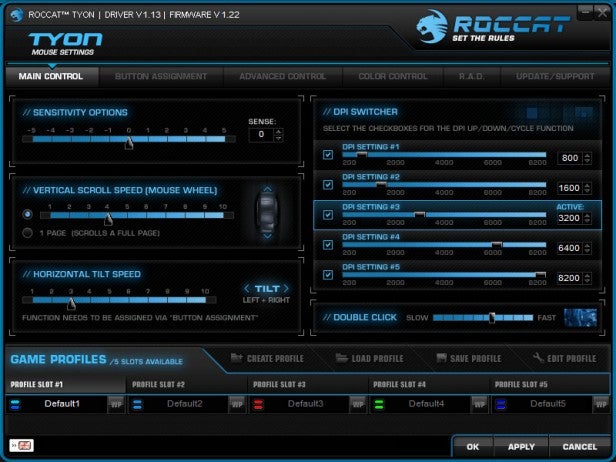 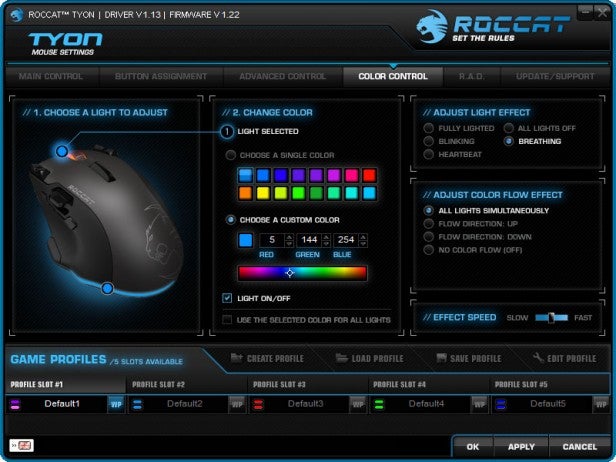 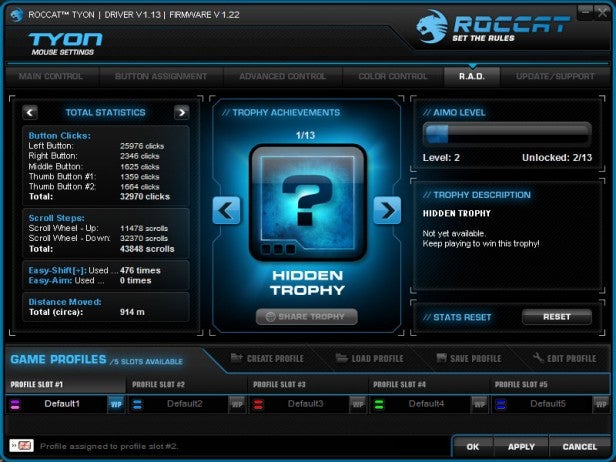 Then there are all the button assignments – all 32 of them – and colour control options. There’s even a section that shows stats about how much the mouse has been used – how many clicks you’ve made, distance moved, etc – with little trophies for reaching certain levels. Not to mention you can control profiles and record macros too.

That it manages to offer up all these options and still remain really intuitive is quite the achievement. However, it is severely let down by being incredibly slow. It not only takes around tens of seconds for the driver app to open but then takes over 45s for settings to be applied to the mouse – a pain if you’re trying to get just the right colour. We also found it completely got its knickers in a twist when we tried to change anything on the default profile, with us only finally being able to actually save our settings by using a different profile.

Still, overall it’s a decent effort and a small price to pay for all that functionality.

As we hinted at earlier, all those extra buttons have been very very well integrated into the whole mousing experience, with every one of them falling within easy reach and offering useful extra features.

Particularly useful are the fin switch and extra buttons to the right of the right click. We found they were great for assigning functions such as throwing a grenade, reloading or switching weapons, all the sort of functions that you want to perform without having to take your fingers off the movement buttons of your keyboard.

Likewise the Easy Shift button is great for assigning buttons to, say, switch profiles or just adding more functions like throwing a medkit in BF4. It’s also very useful for desktop work like assigning shortcuts for Photoshop or Office apps.

The X-Celerator, though, we found less use for. Not only does it have limited applications as an analogue device (you can also just use it as an extra pair of buttons) but it is also a little awkward to use accurately, especially if you use a finger-grip – you really need your palm to be anchored to the mouse to provide accurate movement. That said, we can definitely see the potential and it doesn’t otherwise get in the way.

As for overall tracking performance, we found it flawless. Never once did it let us down and the DPI controls meant we always felt in control. The only issue was those hard plastic sides which are just a little more slippery than we’d like, though the contouring means you’re unlikely to drop this mouse. 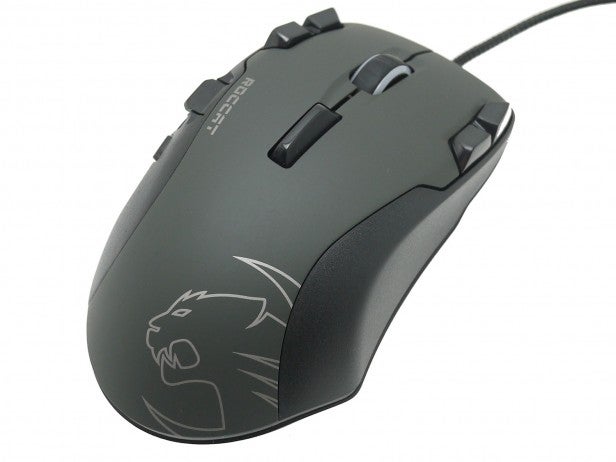 Should I buy the Roccat Tyon?

There’s a heck of a lot to like about the Roccat Tyon. It offers good ergonomics, high-end performance and masses of genuinely useful features, and it looks pretty good too. Even if you’re not entirely sure you need all its extras they don’t get in the way and can just be there ready and waiting for if you ever do fancy trying them.

Of course you do pay for those extras, and coming in at £84.99 the Tyon is nearly double the price of more standard performance mice. It’s certainly not extortionate, though, and plenty of competing mice offer far less for similar money.

Good ergonomics, a nice design and bucket loads of useful features make this mouse a real contender. It is pricey, though, so it’s worth having a think if you’ll likely use all those extras.