Logitech has a long and enviable
history in the gaming mouse market and its latest model looks set to
continue that line. While it may not include every possible feature, it
packs in a high-speed, high-sensitivity laser sensor, a 32-bit ARM
processor and oodles of programmable buttons, so it’s got all the
performance you should need.

One
of the areas where the Logitech G402 doesn’t really impress is design.
The matte and glossy black plastic combination is certainly not
offensive but neither is it all that inviting, plus the offset glowing
blue G logo doesn’t really do much for us – it’s all a bit incoherent.
Other mice like the Corsair M45 or Steel Series Sensei give off more of a
sense of cohesion. 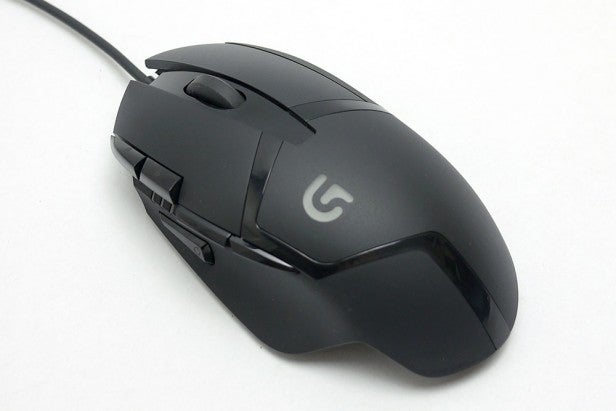 There are no premium materials here either,
for what good they do. There’s none of the Aluminium of the Corsair M65
or the snazzy braided cables of many premium models. Here the cable,
while perfectly long and relatively kink-free, is plain rubber.

All told there’s a sense that this could just as well be a cheap Chinese knock off so far as design is concerned.

While
the G402 may not look the part in use it most definitely feels it. The
matt finish feels great under your hand and fingers while the contouring
is near perfect.

Now clearly there’s always a degree of
personal preference when it comes to mouse ergonomics but to this
reviewer the G402 absolutely nails it. 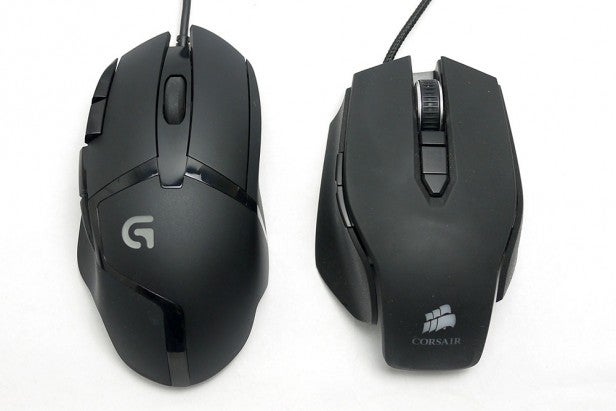 The Logitech G402 is longer and slimmer than the Corsair M45

The elongated
gently-curved top section supports the hand nicely when in a more
relaxed position while the scalloped, rubberised sides provide a really
firm grip when moving the mouse with thumb and little finger.

The
flared section under the thumb-grip also really helps the thumb to not
slide off. In contrast, the Steel Series Sensei’s fairly flat sides can
almost cause the thumb to slip under the mouse.

Further subtle
tweaks include the chamfered edges round the base of the mouse, which
help ensure the mouse doesn’t dig into your mousemat – a particular
hindrance when quickly raising and moving the mouse in FPS games. The
Corsair M45 doesn’t have this and digs in awkwardly.

Finally, we
come to the buttons and again, to this reviewer, they’re almost
flawless. For a start all the buttons are excellent in terms of
responsiveness. They all click instantly rather than having a stodgy,
delayed feedback.

They’re also placed perfectly. Clearly the two
main buttons and the scroll wheel fall easily into place – it really
would be something to get that wrong – but then there are the Back and
Forward buttons that sit just perfectly above the thumb. Here they’re as
close as can be yet aren’t prone to accidentally being hit. 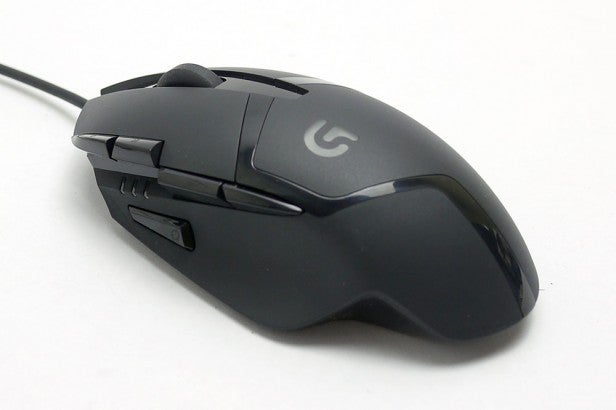 Likewise
the two buttons that sit just to the left of the Left-Click button.
These are for adjusting DPI and again they’re really easy to reach yet
don’t get in the way. So good are they that we’ve been forced to change
our mind about multiple DPI settings. We’ve long been in agreement with
SteelSeries that most of the time you only really need two DPI settings –
fast and slow – when gaming and that having a single button to switch
between the two is all that’s needed. However, so convenient did we find
the G402’s buttons that we ended up regularly switching between
multiple settings.

Finally there’s the ‘sniper’ button, which
sits just forward of the thumb. This is for momentarily reducing the DPI
while it’s pressed, so you don’t need to adjust the DPI up and down
manually. We found this a little less convenient because it requires
adjusting your grip to move the thumb forward, but it works and this
location has become the standard for this feature.

One final word on the overall ergonomics, in case you hadn’t noticed, this is a right-handed mouse only.

The
headline feature of this mouse is its 500inches per second (ips) sensor
speed. IPS is usually the top speed at which the optical or
laser sensor stops being able to consistently tell how the user has
moved the mouse, and it usually tops out around 100-150ips. However,
what Logitech has done with the G402 is combine the laser sensor with an
accelerometer and gyroscope.

This allows the onboard processor
to fill in the blanks so that the mouse still reports a reasonably
accurate movement. It’s the same principle as employed by some sat navs
to report a more accurate location. Logitech claims this technology
allows the G402 to remain accurate at speeds of over 500ips. 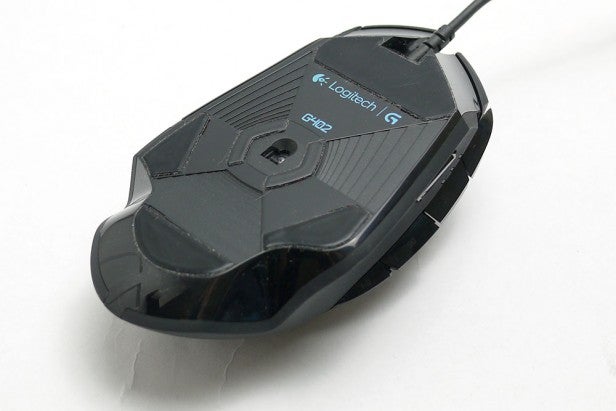 Powering all
those extra calculations is the other headline feature, the 32-bit ARM
processor. There’s not word on exactly what processor this is.

As
well as this very high speed, the sensor is also rated to 4,000 dpi and
the mouse can report at intervals as low as 1ms. Neither are class
leading figures but they’re competitive with other high-end mice.

That’s a
pretty impressive set of pure performance features but when it comes to
the extras, the G402 isn’t shouting so loudly. For those that see a
point to such things, they’ll miss the lack of a weights system – for that you’ll have to opt for the G502. There’s
also no adjustability of the shape nor inbuilt memory for storing your settings for use on different
computers where you can’t install the driver.

To
get the most out of the Logitech G402 you’ll need to download
Logitech’s Gaming Software. Here you can change the functions of all the
buttons, fine tune the DPI settings, change the polling rate, adjust
the lighting for the logo, and there’s even a tool for testing how fast
you can move your mouse! 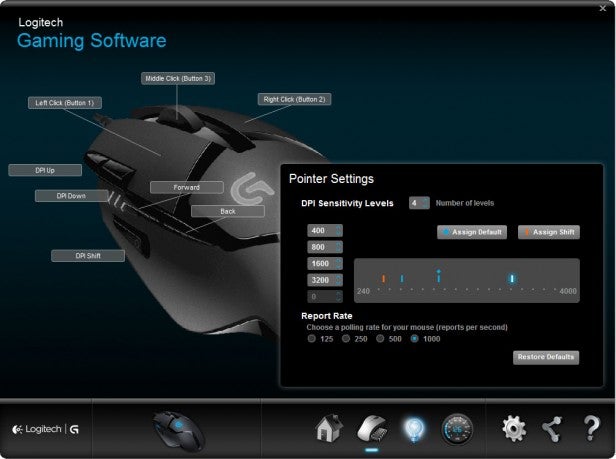 The latter is a rather comical addition
as we gave it a go and found that to get anywhere close to 100ips – let
alone 500ips – we were having to move the mouse so furiously there’s no
way any gamer could come close in the heat of battle. That said, the
extra leeway is always welcome.

Overall it’s very clearly laid out and easy to use.

While
a lot of the numbers mentioned in gaming mouse specs does sound like
snake oil the results are clear. Tracking performance of the G402 is
flawless. Sure a lot of high-end laser gaming mice are as good these
days but it’s always good to be reminded of just how good these mice
are. 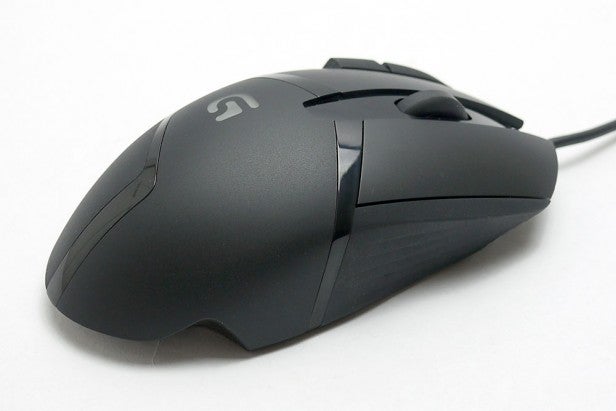 Should I buy the Logitech G402?

Priced
at around £49, the Logitech G402 is competitively priced for such a
high-performance mouse. So, combined with its great ergonomics it makes
for a great buy if pure performance is your concern.

That said, there are plenty of other very good
gaming mice that do have a few more physical features to show for the
money and the design here just doesn’t look that premium. If you can look past that, though, it’s a great buy.

While it may not be the
most attractive gaming mouse on the market the Logitech G402 Hyperion
Fury absolutely delivers where it matters. It’s really comfortable to
use and it performs superbly.