The GR III is a considerable update on the GR II, blessed with a speedy performance and the capability to produce detailed, stabilised, distortion-free images, all from a tiny body you can get into your pocket. Low-light focusing performance, together with miserable battery life and last-resort video quality are limitations worth bearing in mind though.

What is the Ricoh GR III?

The GR III is the latest premium compact camera in Ricoh’s classic GR series, which dates back to 1996.

It’s fair to say the world has changed a bit since then, but the GR range has always been a unique, timeless breed. While the likes of Sony and Panasonic battle it out with snazzy software features, it’s stuck to the photographic fundamentals – a big sensor, high-quality optics and a pocketable form factor. 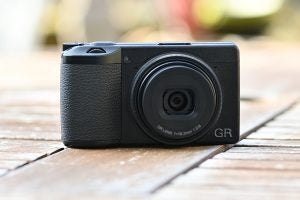 This has made the GR III’s predecessors a huge hit with street and documentary photographers. There’s been strong competition from the likes of the Fujifilm X100 and Leica Q, but unlike those cameras, the GR III ditches the viewfinder for truly pocketable dimensions.

Combining understated style with high performance, the digital line evolved from the GR film cameras that were designed in much the same way. And the GR III is now the third camera in the series to sport a large APS-C sensor, the sort you’ll normally find inside DSLRs and mirrorless cameras.

As always, it’s all about the joy of what Ricoh calls “snap shooting”. But recognising that this is precisely the strength of smartphones and computational photography, the GR III has been given some big upgrades.

The previous GR II was only a slight refresh on the GR it replaced, but this third addition is a far beefier update. With a fresh 24.2MP APS-C sensor, a revamped processing engine, a hybrid AF system and Shake Reduction to keep things crisp, the GR III packs plenty to win the street photographer over.

So is there still a place for a camera like the Ricoh GR III in 2019?

The GR and GR II both offered a respected (if slightly noisy) 16-megapixel APS-C sensor, but this new release packs a 24.24-megapixel update, which runs from ISO 100-120,400. This spits out Raw and JPEG images, although it only records Full HD video to 60p rather than in 4K.

The lens is new, but it once again carries an 18.3mm fixed focal length that works out as 28mm in 35mm terms and continues to provide a maximum f/2.8 aperture. There’s no zoom, but the camera echoes its forebears in giving you the option to crop to 35mm- and 50mm-equivalent settings, with images output at 15.3-megapixel and 7.5-megapixel respectively. 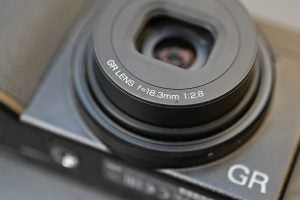 Nine aperture blades bode well for round bokeh, while the built-in ND filter gives you a little more flexibility when shooting images or videos in bright light, or when capturing long exposures.

If you remove the ring around the lens, you can also mount the GW-4 conversion lens, which gives you a useful 21mm focal length (in 35mm terms) to play with.

One complaint with the previous GR models was dust getting inside, which is no doubt why we have dust reduction now on board. Shake Reduction, which promises four stops of correction, is also present, while other influences from Pentax (which Ricoh acquired) are also very visible, from the Outdoor View mode that boost the LCD’s brightness through to Peripheral Illumination Correction and D-Range Correction. 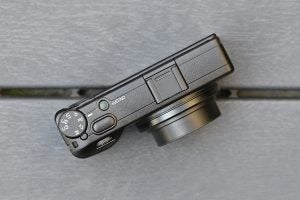 There’s still plenty of Ricoh GR DNA, though, such as the Snap Focus mode that immediately focuses to pre-determined distances for the most spontaneous moments.

The camera swallows a single SDHC or SDXC-type memory card, but it also packs 2GB of internal memory, which is unusual but definitely something you’ll appreciate if you leave the house not realising your card is still stuck in your laptop.

Sadly, battery life is less impressive at just 200 frames, no doubt thanks in part to the new Shake Reduction system, although you can charge the camera up through its USB Type C port. There’s also no flash, something that was included in the GR II, although you can mount a separate unit through the hotshoe.

The body is very much GR in its design as before, and feels nice and sturdy in the hand, with plenty of rubber around the grip and at the back where the thumb sits. It’s roughly about as deep and tall as the GR and GR II, but if you’re used to those models you’ll notice Ricoh has actually managed to make it a fair bit shorter in length. That’s particularly welcome here, as it’s a camera you want to be able to squeeze into your pocket.

The d-pad at the rear has been replaced by a dial, which makes light work of quickly scrolling through menus among other things, while all buttons and the rear dial click positively when pressed. The mode dial on the top plate also moves very freely when its button is held down, which also means it stays in place when it is isn’t, and it’s great to see Ricoh has kept three separate user-programmable shooting modes here for quickly changing between your favourite set of settings as a moment presents itself.

Like the GR II before it, the GR III doesn’t have a built-in viewfinder of any kind, although you can slip one of two optical viewfinders into the hotshoe if you’re happy to fork out for them.

The LCD screen is fairly basic on paper, with 3-inch dimensions and 1.04-million dots, and no option to pull it away from the body. If you’re a purist you may well be fine with things the way they are, but there’s no denying how convenient tilting LCDs can sometimes be. 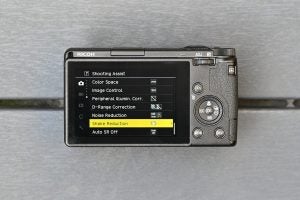 The big change here from the GR II is that the screen now responds to touch – and this works very well in practice. You only need to tap the screen gently for it to immediately register this, whether you’re setting the focus point of adjusting menu options.

It also works very well post capture, where you can swipe, pinch-zoom and double tap into images as you’d expect. The screen is also very sharp and shows excellent contrast on default settings. To sum up, the lack of physical movement might disappoint some, but otherwise top marks here.

One thing you quickly realise about the camera is just how nippy it is in general use. It springs to life with almost no delay and moving through the menus using either the new menu pad wheel or the touchscreen is very fast. The new processing engine is certainly proving itself here.

The menu systems on the previous GR and GR II were fairly dense, but they’ve been revamped for the new model so that that they’re easier on the eye and more logically sorted, and this all adds up to a noticeable improvement. 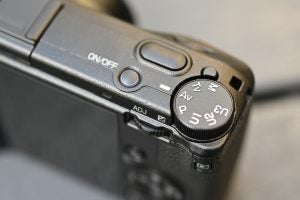 You can capture images at 4fps in Raw and JPEG formats. With the fastest memory card available, we captured 13-14 frames without any slowdown, and these are written to the card in about five seconds. That might not seem like too much, but for the street photographer it’s likely to be enough. Switch to JPEG and Ricoh promises you can carry on going until the card is full, and this appears to be the case.

The focusing system now uses both phase- and contrast-detect AF pixels, which will come of some relief to previous owners who found the contrast-detect AF system a little tardy. There’s definitely an improvement here, and for static subjects it’s certainly fast enough, but it’s still a little behind the competition. 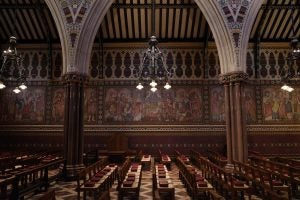 Noise is visible in this image captured at ISO4000, although the Shake Reduction system now allows you to use slower shutter speeds with lower ISO settings.

Perhaps more disappointing is performance in low light, where it can struggle to lock onto subjects that aren’t very close by and its default auto pattern can be somewhat unpredictable as to where it decides to focus.

Still, image quality is very good overall. The GR and GR II spat out some of the best image quality from compact cameras around at the same time, and even though things have moved on the camera can still hold its own. 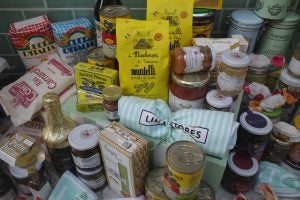 Detail across the frame is generally very good. Here, you can still read much of the smaller text in the labels towards the edges of the frame.

Details are very nicely resolved across the whole frame, even when shooting wide open at f/2.8, while the lack of barrel distortion in both Raw files and processed JPEGs is very impressive. Vignetting is more obvious, though, and this is still visible even as you approach the middle of the aperture range, but the Peripheral Illumination Correction option does well to lift this.

The Shake Reduction system also allowed us to get acceptably sharp images at shutter speeds as low as 0.8sec, which is very impressive, although hit rate is better at slightly shorter ones. You can use crop settings to change the effective focal length, from 28mm through to 35mm and 50mm – this slider image shows the two extremes: 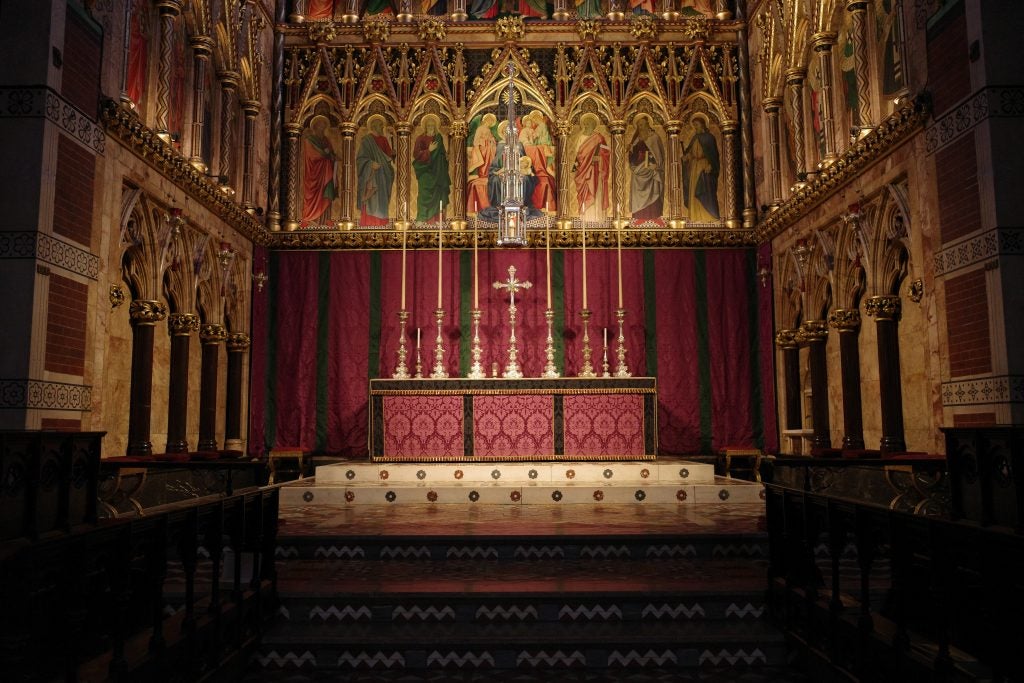 Colours lack a little punch on standard settings, so you may want to use the Vivid option or tweak them in some other way. Noise is very well controlled, though, and even images captured at ISO 6400 can be cleaned up and used at bigger sizes. That said, dynamic range could be better, as shadowy areas don’t show quite the same malleability as you’d expect. 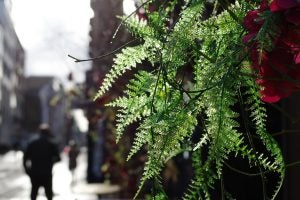 Out of focus appears appear pleasing, although close inspection shows bokeh to have a slight onion-ring texture.

The metering system behaves fairly predictably, underexposing in the face of brighter areas such as skies. Images captured with the Highlight Correction option set to Auto often show better highlights retained in Raw files than their JPEG counterparts, so it’s a better idea to process raw files here and bracket your images in high-contrast scenes.

The fact that there’s no 4K video is a bit disappointing, but whether the average user is clamouring for this is another matter. What’s more of a let down is the quality of Full HD footage, which is just not anywhere near as clear as it ought to be.

Why buy the Ricoh GR III?

It’s not the best choice for low-light work or video, but the GR III produces nicely detailed photos with little distortion and low noise.

Whether you’re shooting on the street discreetly or you want something for documenting your travels or everyday goings on, the GR III could well fit the bill.

The only real downers are the low light focusing performance and video quality, plus that lacklustre battery life. If you can stomach these (and don’t mind carrying around a spare battery or charger) then this is still an enjoyable and dependable premium compact camera. 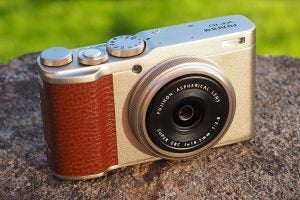 The camera’s closest rival right now, the XF10 also manages to squeeze a 24-megapixel APS-C sensor and a 28mm-equivalent optic into its tiny body, along with a hybrid AF system, touchscreen and Wi-Fi+Bluetooth connectivity.

It appears to have an upper hand in offering 4K video, though only at an unusable 15fps. The fact that it’s almost half the price of the GR III does make it much more appealing. 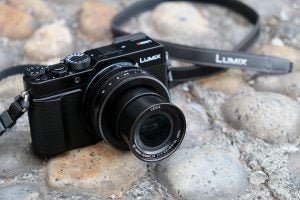 The update to the much loved LX100, this Mark II version is only a fraction more expensive than the GR III, but it’s likely to appeal to much the same audience.

Its 17-megapixel Micro Four Thirds sensor might be smaller and lower in pixels, but it’s partnered with a 24-75mm (35mm equivalent) zoom lens and has the added bonus of an integrated electronic viewfinder.

Better video specs, including 4K recording and 8MP image extraction, together with 11fps burst shooting, only strengthen its case.