What is the ResMed S+?

If I told you a few years back that you’d be sleeping next to a machine that watched over you all night, you’d probably tell me to lay off the Sci-Fi movies. However, that machine-monitoring reality has arrived in the form of the ResMed S+ sleep tracker – but don’t worry, it isn’t scary.

Activity tracking technology has really matured over the years, so the data from smartphones, smart watches and fitness trackers is pretty well accepted as accurate. Sleep tracking accuracy, on the other hand, is still up for debate with most of today’s options just using their accelerometers to detect when you stop moving.

ResMed claims to bring medical-level experience to sleep tracking in order to offer a solution that means no more wearing items to bed or attaching trackers to pillows or mattresses.

But does it work? Is the data useful? And, crucially, can the S+ actually help you sleep better? I braved the all-seeing red LED of the S+ by my bedside to find out if it’s the best sleep tracker going. 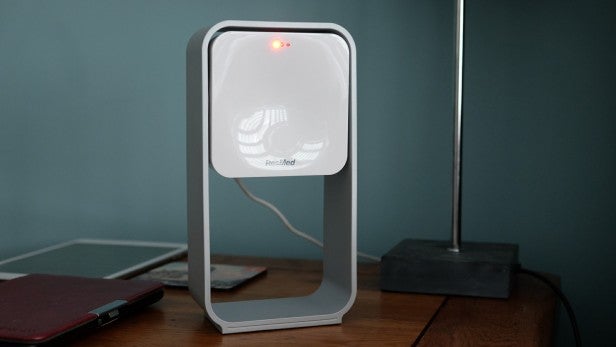 There’s no denying it, the S+ is an attractive bit of kit. If anything, it actually enhances the bedside with its brushed metal surround and shiny white fascia of the box at its centre. The minimalist design is spot on, with only the the wire with which you plug in the device letting it down – it hangs off the device bang in the centre and there’s no way to clip it down to hide it.

Then there’s that red eye. Okay, it’s an LED. It glows red when the S+ is on but not connected; if your phone is in the vicinity it will turn green, indicating that it’s linked and ready to record. Thankfully, the light turns off when your head hits the pillow, so you’re left in darkness through the night.

That previously mentioned white section of the S+ is where the brains and sensors live. As such, it hangs in the metal frame so it can angle towards your body as you sleep, no matter the bed-to-bedside height difference. 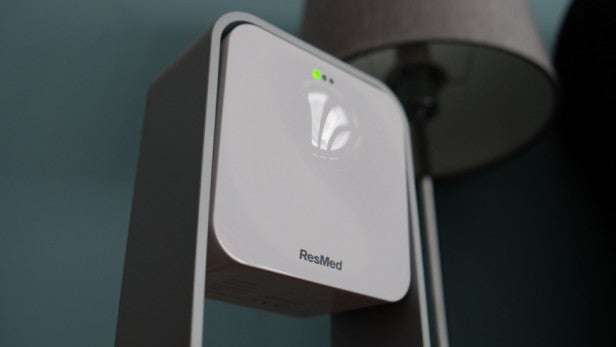 The entire unit is well sized, so it doesn’t take up too much valuable bedside space, but weighty enough not to get moved or knocked over as you reach for a glass of water or light switch in the night. Not that you’ll expect to do either when in your newly found deep sleep, of course.

The ResMed S+ doesn’t use magic to somehow detect your sleep levels all without touching you. It actually uses radio waves to track your breathing, meaning that even when you’re under the covers it is still able to do its thing. In addition, it’s accurate enough to work even as you move, or with a partner laying next to you.

Once the smartphone app is connected via Bluetooth, you can hit the Sleep button to begin prepping for the night’s slumber. First, it will ask you a few questions, offering up a scale for answers: How stressed were you today? How many alcoholic and caffeinated drinks did you have? How much exercise did you do? Then you can choose to set a smart alarm and/or turn on a calming sound to send you to sleep. 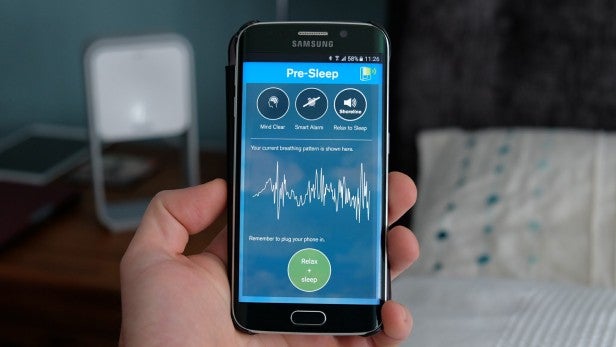 The smart alarm offers you a 15-minute window in which to rise so that the S+ can wake you when you’re in light sleep, making it feel more natural and less jarring.

I set the S+ to wake me at 7:10am. Although it will never wake you later than this time, it could be as early as 6:55am. This worked really well and appeared to become more accurate after a few nights of sleep tracking. It was just like waking up naturally, and since it eases you into the morning with sounds of, say, the rainforest, waking up is a pleasure – at last.

For me, that in itself is enough to make the S+ worth the price, but the unit offers a few more features to enhance sleep. 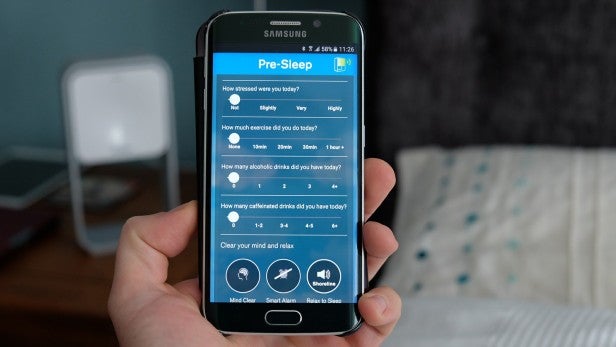 The sounds that send you to sleep work in time with your breathing, slowing down to relax your breathing and slip you into the land of nod.

Using the app it’s possible to see a waveform of your breathing, which is really impressive; it changes as you alter the pace of your inhaling and exhaling. The S+ offers a selection of sounds to which you can nod off, such as waves crashing or wind blowing.

There are also some more calming options, and all automatically stop when the S+ detects that you’re asleep. This took a bit of getting used to, and following a few nights appeared to result in deeper, more dream-filled sleep.

Since the S+ only really does the sensor work, everything else happens within the app. All your sleep data will be there and waiting for you on waking.

This certainly ticks the boxes for ease of use, but it also means that your phone will need to be connected all night. Your handset is also used to play the sleep sounds and the alarm as there’s no speaker built into the S+. The result is a little battery drain. It isn’t a huge amount, and since you’re likely to have your phone plugged in it won’t be a huge issue. 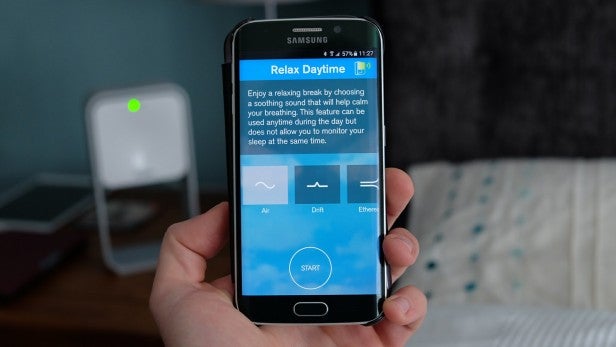 The S+ comes with a dual-USB wall adaptor at least, meaning you can charge your phone and power the S+ at the same time. The S+ merely uses a Micro USB cable for power.

The app offers insights throughout the day that aim to help you actually take action to improve sleep. Some are useful, others less so, but since you rate each one at the end there should be a learning curve that serves to make the tailored tips better with continued use of the S+. 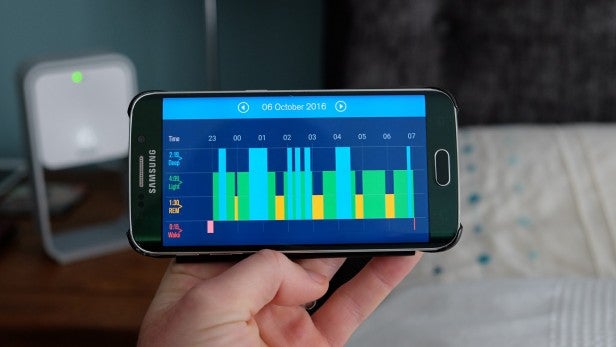 For example, one night I apparently woke seven times through the night, and the app advised that I get out of bed if not asleep after 15 minutes, then wait until I was tired and try again. How likely I’d be to try that the following night is questionable, but for those suffering with real sleep problems any advice would be welcome and could even result in better sleep.

When it comes to displaying your sleep data, the app offers up clean and clear results. You get an overall sleep score with explanation of how this is worked out, an REM score for mind recharge, and a Deep Sleep score for body rebuilding. There’s also a graph with the exact time for wake, REM, Light and Deep Sleep. It’s far more elaborate than what you’ll get from most wrist-worn activity trackers. 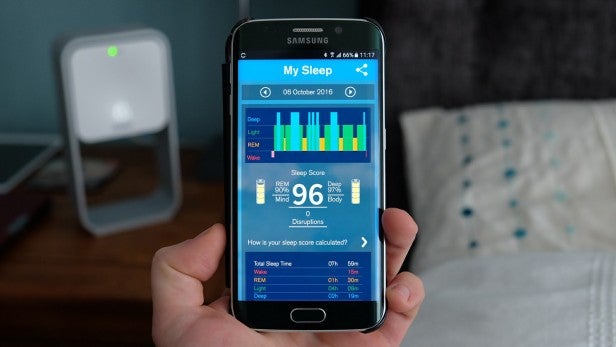 Where the S+ is found lacking is with advice on what to do with all that data it’s collected. As you can imagine, following a few nights all that data starts to look a little same-y, and without the tools to take action to affect it you can be left feeling more helpless. That, or you’re satisfied so don’t feel you need to track your sleep any more.

Either way, I found the S+ a useful devices for its ease-to-sleep sounds, which encouraged deeper sleep, and gentle smart alarm, which made for more natural waking.

Should I buy the ResMed S+? 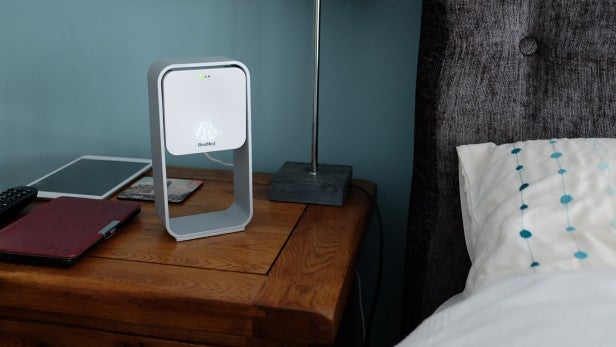 When it comes to sleep tracking, the ResMed S+ is one of the most attractive, non-invasive and simple solutions available. It works well with its comprehensive app, offers an excellent smart alarm, calming sleep sounds and clear data to analyse.

The S+ even offers tips to help improve sleep. The only downside to all this? If the tips don’t work then you’re left with a lot of data telling you that you can’t sleep, but with very little to help fix the problem.

Of course, the sleep sounds and the fact that it works with your breathing offer a more active solution than what is available with other sleep trackers on the market, so it’s a big step in the right direction.

The ResMed S+ is the best sleep tracker available if you want a simple, clever and non-contact sleep monitor that can help you get a good night’s kip. I