Meanwhile, with the controls changed for a proper gamepad, Revelations is an awful lot easier to play and enjoy. 3DS owners with the Circle Pad Pro accessory will have already found how being able to aim and move at the same time makes the game less frustrating, and while the svelte-looking Jill still turns like a tractor, it’s easier to avoid getting swamped by monsters. The ease with which you can switch to scan mode, analysing monster remains and areas of the room to find bonus items and improve your ranking, also makes that part of the game more accessible. 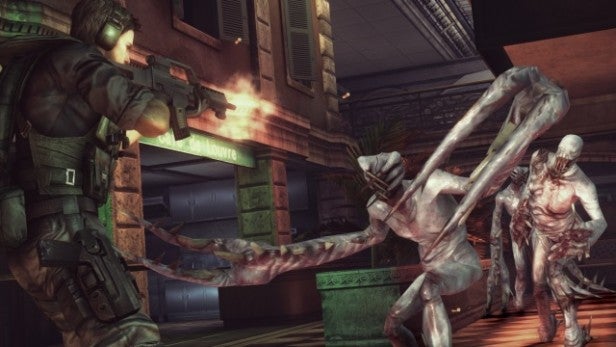 Transforming the game into an episodic TV series, complete with recaps at the start of each chapter, is a brilliant idea, too, giving the game a sense of pace and breaking it up into a series of half-hour to hour-long sessions. Finally, the orchestral score is fantastic, while the voicework – with a few exceptions – is actually more consistent than it was in RE6.

All the same, let’s not get too excited. Revelation’s biggest problem remains its monsters. The Ooze, as they’re known, are ugly – and not in a good way. Worse, they’re as dumb as a bag of rusty spanners. The fast-moving ones don’t do anything more than rush and attack you or hop around impotently, while the slow-moving ones settle for shambling towards you, often struggling to navigate furniture or corners. After the dynamic attackers of RE4 and RE5, The Ooze seem like an odd step backwards, more a symptom of working within the confines of a handheld than a sign of inspired game design.

In fact, there are other signs that this was originally a handheld game. While you eventually get to trawl around most of the Queen Zenobia – with interim loading sessions cleverly disguised – these are all played out in small, artificially truncated areas without a great deal to see or do. Brevity means you’re not held up for long, but it’s frustrating to get stick with an awful comic relief double-act in the snowy wastes when you want to get back to the central drama.

Please, Capcom, let’s have no more Quint and Keith. 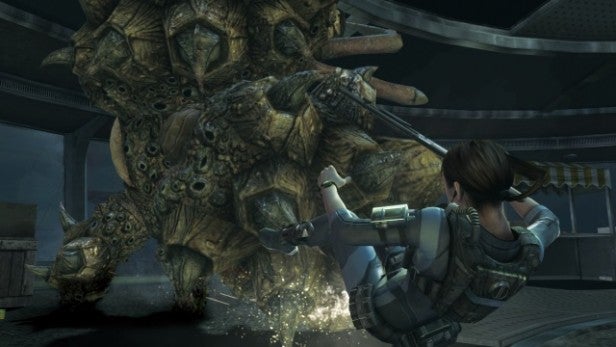 Those who have played the 3DS version can expect some minor changes and one new common Ooze, while there are new costumes to discover and a new, harder remix to play through. But if you played Revelations on 3DS, there’s not much reason to replay it here.

Finally, multiplayer options are as basic as they come. There is no campaign co-op, which leaves you with Raid mode, where you rush your way through a selection of scenarios with another player, blasting monsters, grabbing bonus collectibles and earning points to upgrade your weapons. It was fun on 3DS and it’s slightly more fun here, but anyone suggesting they would rather play this than, say, Gears of War’s Horde, Beast or OverRun modes or Halo’s FireFight needs their head examined. 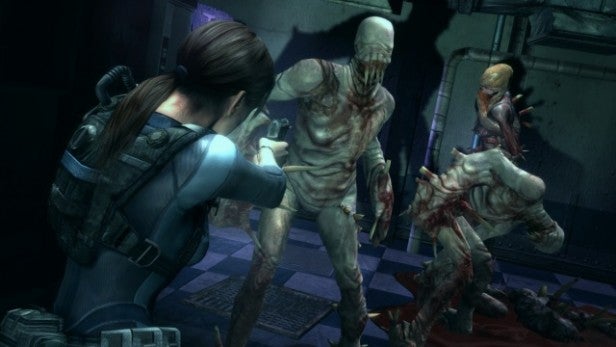 Overall, though, these are fairly minor quibbles. Where Resident Evil 6 was all over the place – brilliant one minute, utterly wretched the next – Revelations reminds you why we loved the series in the first place. It can be sloppy, nonsensical and baffling at times, but it can also be exciting, compulsive and scary. If Capcom wants to put Resident Evil back on top, then Revelations – not RE6 – seems like the stronger foundation to build off from, and that makes this HD remake a must-have for any fans who didn’t experience the 3DS original.

A solid transfer from handheld to home console only cements Revelations’ position as the best Resident Evil in a generation. The poor monster AI and truncated levels hold us back from a whole-hearted recommendation, but with a strong setting, a reasonable coherent plot and plenty of atmosphere, this remake reminds you of why we loved Resi in the first place.