Probably the best Game of Thrones game we’ve played to date. Incredible value, no matter what format you’re playing on.

Have you ever sat in front of your TV, supping your wine, smugly making insinuations about Cersei Lannister about what she should be doing on the Iron Throne – how much better things would be going if you were in charge? Well, armchair monarch, good news – Reigns: Game of Thrones delivers on that oddly specific fantasy, taking the fantastic Reigns formula and wrapping it around the dense, intricate world of George R R Martin’s Game of Thrones series.

This being a game based on Game of Thrones, you can expect a lot of one thing: Death. You’re going to die. A lot. The core conceit of any Reigns game is that you rule over what could be called a ‘Tinderocracy’. Citizens and advisors come to you asking simple favours, and you have to respond with a left swipe for no, or a right swipe for yes. Sounds simple, but there’s a logic to this game that – after 10 hours of playing – still boggles our minds.

There are four key elements of the game you need to keep on top of: your coin, your standing within the Sept (Game of Thrones’s equivalent of the Vatican), your military might, and the common people’s opinion of you. Say you’re playing as Sansa Stark – Cersei comes to you in chains, asking for a trial. You know that she’s a skilled manipulator and will stab you in the back the second she can, so you choose to simply execute her instead – your military might goes up a little (you’re clearly fearless, after all) but the people’s respect for you goes down. Way down. It could go so far down that they rampage the royal palace and execute you. Yeesh. 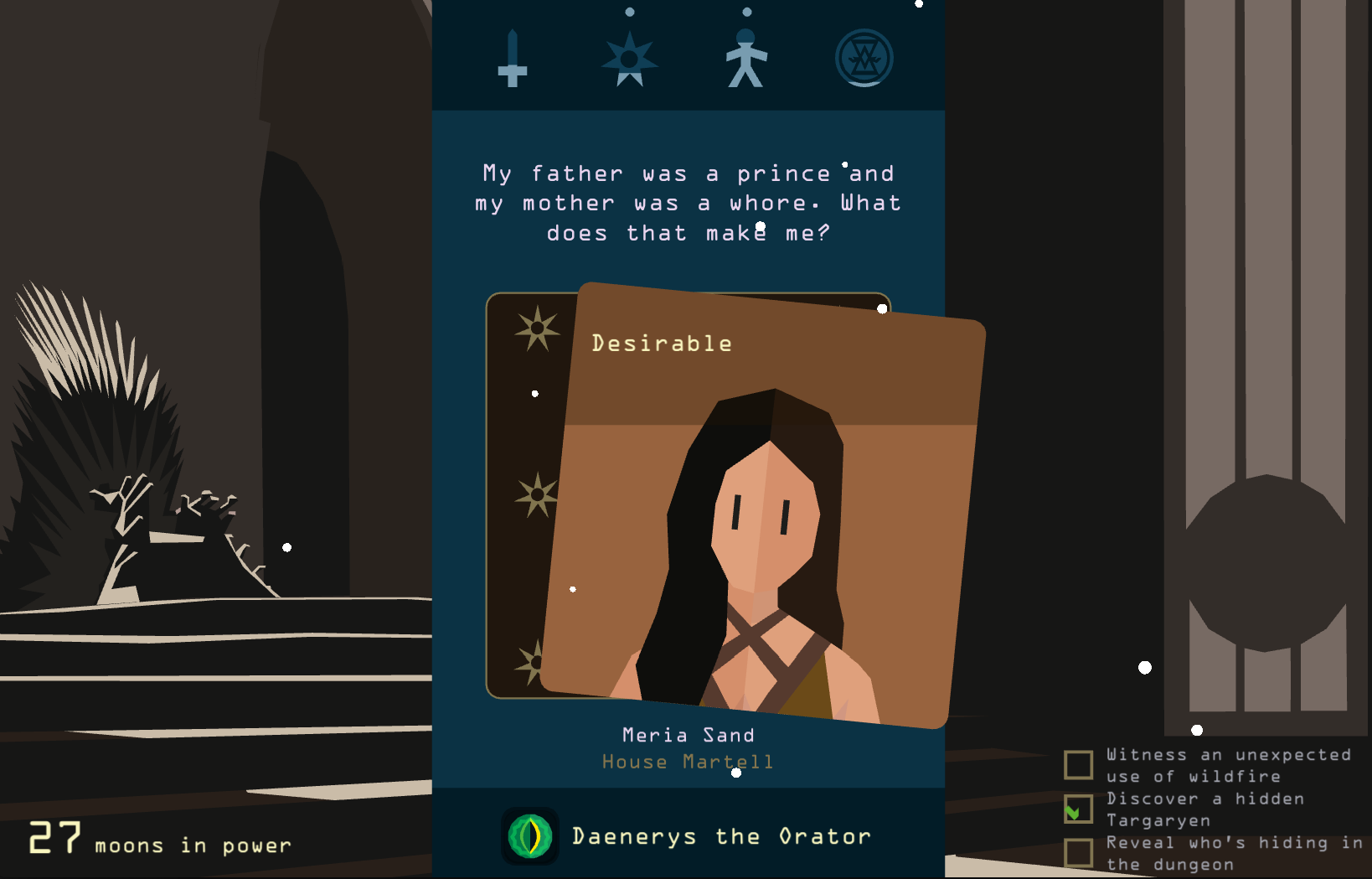 So, by that logic, there are eight ways to die: from having too much (or too little) money, respect, religious standing, or power. But wait – there’s more! Each character can suffer death in different ways, too – whether you make the wrong choice on the battlefield, drink from a poisoned chalice, encounter a dragon or simply don’t survive the long winter, there are several ways for your seemingly assured rule to end and end suddenly.

Enter the game’s core mechanic: Melisandre. The Red Priestess. Readers and viewers will know that Melisandre, fond of doomy portents that often come true, serves the Red God of R’hllor, a deity which blesses its followers with unnatural long life and reincarnation. This narrative conceit handily legitimises the respawn mechanic and serves to lace the plot with a layer of mystery.

You, the player, are an agent of the Red God, born again time and again to rule Westeros – and one day maybe, just maybe, you may be able to survive the wights of winter and claim the Iron Throne. Melisandre’s vision only goes so far, and whilst she may drop hints about how to progress or what to aim for, there’s a deeper level to the game (which we won’t spoil here), which leverages some of the more interesting lore deep in the annals of Game of Thrones history.

Where Reigns: Game of Thrones differs from its predecessors (Reigns and Reigns: Her Majesty) is that you feel like you can actually role play in this one. There are eight playable heroes – Cersei, Arya, Sansa, Jamie Lannister, Tyrion, Daenerys, Jon Snow and more we won’t spoil – and each of them has their own unique set of challenges and dialogue open to them. 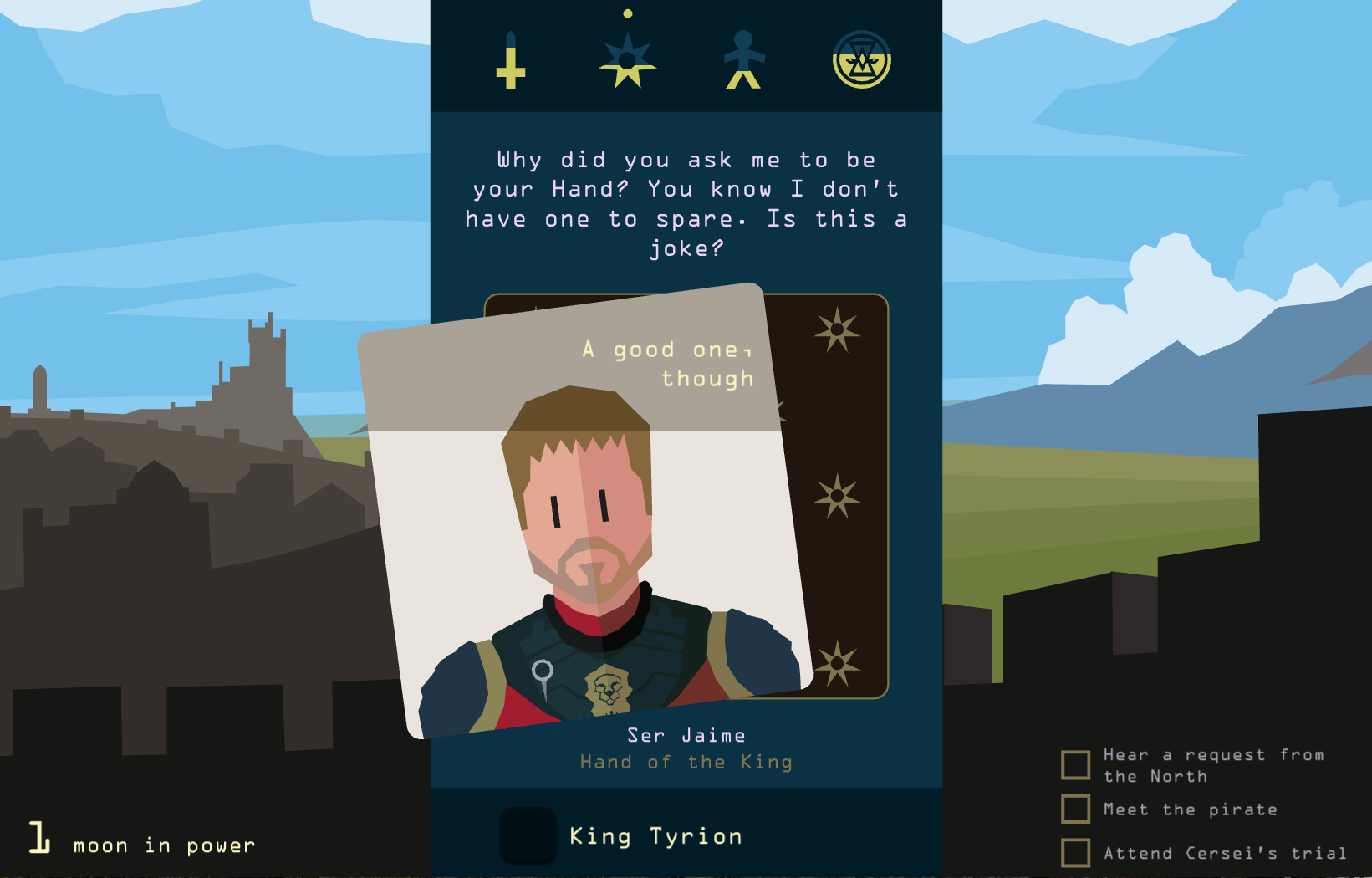 Some rulers might see war with Dorne come easier, some might have the Greyjoys more doggedly at their back, some might find themselves the target of more assassination attempts and some might just be able to charm their way through life.

If – like us – you’re a keen fan theory reader and like to indulge in all the What Ifs of Westeros, you can experiment with some long held beliefs: you can try and get Tyrion to ride one of Dany’s dragons, you can try and marry Sansa off to the Hound, you can form an uneasy alliance with Cersei and Sansa. It’s basically HBO-sanctioned fan-fiction at this point, and we’re so down with that.

Perhaps our favourite thing about Reigns: Game of Thrones is developer Nerial’s astounding creativity when it comes to the cards you encounter and their impact on the game. Usually, with a game like this, you can reverse-engineer what’s expected of you and start ticking the boxes to get what you want. Nerial, thanks to its expertise in subverting expectation and its knack for creative flowcharting, seems to consistently anticipate what you think might happen, and then punish you for trying to second guess. Much like the TV show and the books its based on, your expectations are raised, and then summarily dashed.  It’s so Game of Thrones, and we love it. 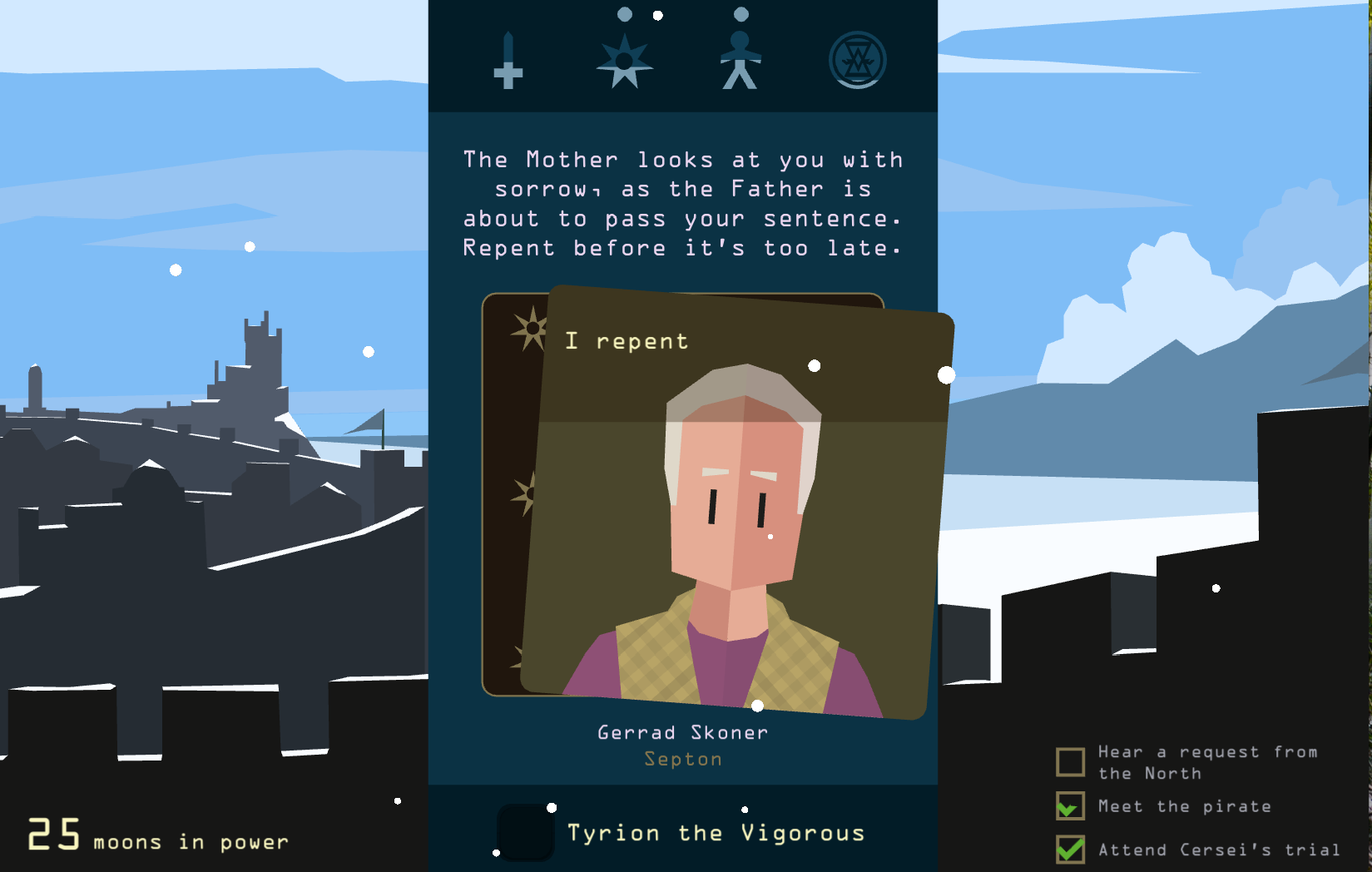 To make such a minimal art style so recognisable says a lot about the distinctive GoT universe, and Nerial’s skill at fitting the property into its formula. Add the official soundtrack from the TV series with what seems to be moody, flowing remixes, and you’ve got a package that represents for more value for money than it’s £2.99 price tag would have you believe.

A truly engrossing, massively dense take on Game of Thrones lore, Reigns takes the already genius formula of the previous games and shows us it can work even in the tumultuous, unpredictable lands of Westeros. Challenging, fluid gameplay keeps you coming back for more and occasional hints of story progression reward experimentation and creativity, whilst sudden and gruesome death punishes any hint of arrogance. Reigns is probably the best Game of Thrones game we’ve played to date. Incredible value, no matter what format you’re playing on.