Hands on with the Razer OSVR at GDC 2015

The Razer OSVR Hacker Dev Kit is the first VR headset running on the Open Source Virtual Reality (OSVR) platform. It’s a new standard for VR gaming and, along with the Razer Dev Kit, it allows programming for a variety of VR experiences.

OSVR has already been supported by a number of industry leaders, including Razer, Gearbox, Unity, Unreal and Sixense. Plus, Razer confirmed that over 50 developers are currently working to bring new games to OSVR devices like this one.

The Razer OSVR Hacker Dev Kit comes with a pair of 5.5-inch FHD OLED displays with a display board interface for interchangeable panels. Within its sensor hub you’ll find an integrated accelerometer with gyroscope and compass. 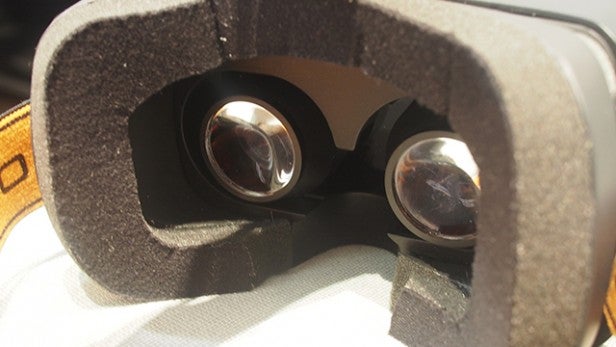 As for the field of view, you’re looking at a 100-degree diagonal and the displays are independently adjustable for use with or without glasses.

On one side you’ve got an external USB 3.0 port for connecting peripherals such as the ones we’ve tested, including the LeapMotion or SoftKinectic hardware.

As the OSVR platform is fully open-source, anyone can start working with it – from software plug-in designers to motion control enthusiasts and game engine devs. Anything you design for OSVR will work across all devices connected to the ecosystem, which the companies involved hope will speed up the development process. 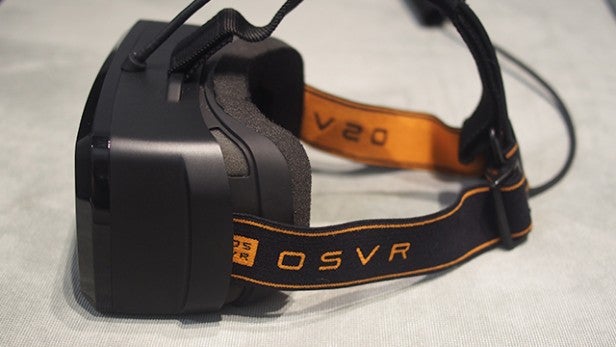 During my GDC 2015 demo of the Razer OSVR kit, I got to try a few different demonstrations that showed how the various peripherals help build a picture of the wider applications of the OSVR technology.

Therefore, with the two combined, the OSVR suddenly puts your hands into the game, without having to give you another piece of hardware to hold. 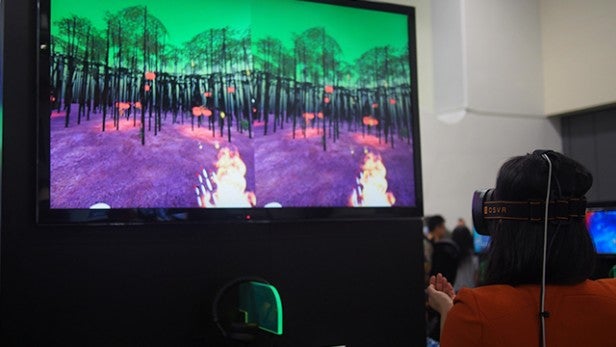 Using the two bits of kit, we played a simple game called ElementL: Ghost Story, where you hold fire and water balls. You must use these balls to attack the oncoming skulls, fighting fire with water and vice versa.

It worked very well, holding your hands out to hold the elements and pushing out to actually fire your ammo. Take out the skulls and protect yourself to progress through the increasingly more difficult levels.

The faster the levels get the more difficulty the LeapMotion had with the movement of my hands. It doesn’t help that you need to hold your hands up higher than normal for them to be picked up properly either, making the motions feel even more unnatural.

Because ElementL is a 360-degree title, there were also huge latency issues with the OSVR headset as you moved to check from where the attacking skulls were approaching. As I was standing up, the whole effect was very nauseating as I spun around to attack the skulls, especially as the resolution and graphics were nowhere near the level I’ve seen on the latest Oculus Rift headset or Project Morpheus. 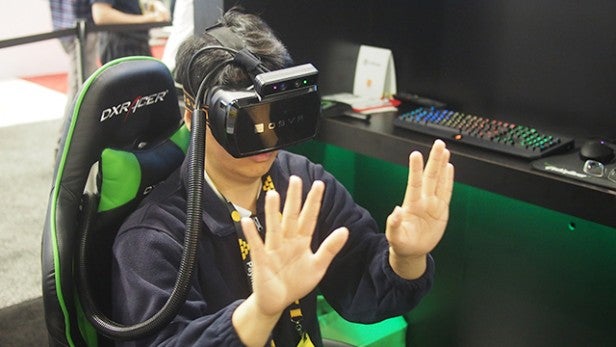 Next, I tried the SoftKinectic 3D sensors that reconstruct a 3D model of your hands in the game. It was only a simple demo, where you had to press a few buttons, pick up and place a few blocks on a table. You could then turn on the gravity and flick the boxes around on the table, or even come up from underneath the table with scooped palms and lift the box. It was an interesting demonstration to show what the technology had the potential to do, but was very far from polished. 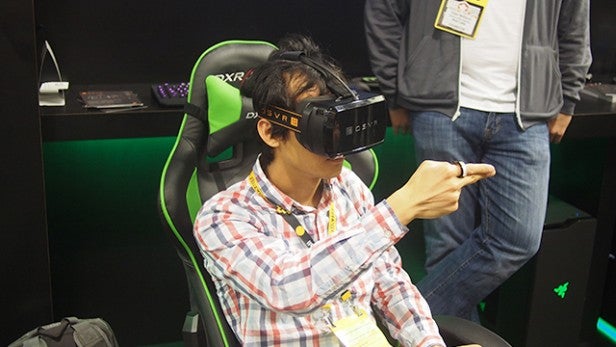 Then there was a rather unusual demo using a Bluetooth ring for turning your thumb and forefinger into a weapon. You place the tech on your forefinger and tap the flat edge to fire. On the flat edge there’s two buttons, one to move forward and the lower one to move you backwards. All you need to do is point your finger in the direction you want to fire and then tap the ring.

In theory it was a clever idea. But in practice, taking on a horde of very irate teddies with an off-centre camera and a misfiring weapon wasn’t exactly my idea of fun. 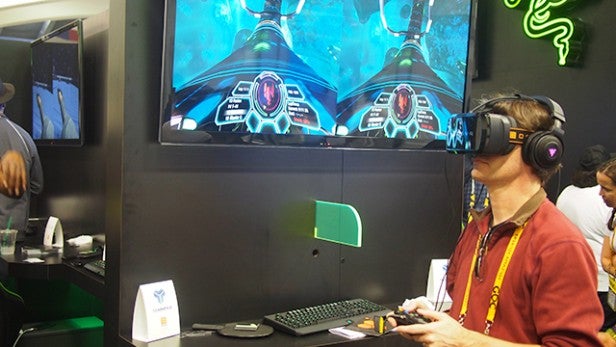 Finally, a small developer called Tammeka had designed a space racing game not dissimilar to the infamous Mario Kart track, Rainbow Road – i.e no barriers and lots of speed boosts. It was played using a standard wired console controller, which actually felt a little odd after seeing my hands in the game in the prior two demos.

Again though, there were major latency issues that made me feel like I was going to fall over into the observing crowd. It was a deeply unpleasant experience at times.

The Razer OSVR Dev Kit and the whole OSVR ecosystem has a long way to go before it can truly be classed in the same league as the HTC Vive, Oculus Rift or Project Morpheus. While those three headsets have sorted out issues with nausea, latency and motion blur, the OSVR feels more like a very early version of the Oculus.

However, I did like seeing how the open-source ecosystem allows multiple manufacturers to get involved in the VR scene, introducing an array of different peripherals to the virtual-reality experience.