What is the Razer Diamondback 2015?

Razer has been making peripherals for 17 years, and a highlight of that lifespan was 2004’s Razer Diamondback gaming mouse.

Beloved by gamers – professional and amateur alike – the Diamondback is fondly remembered as one of Razer’s early big wins. Enter, the Razer Diamondback 2015.

The new Diamondback, announced late last year, is positioned as a high-end, ambidextrous mouse, just like its forebear.

But does this bold successor instil that same excitement in its users as the original did over a decade ago? I’ve spent a few weeks using the Razer Diamondback to find out whether this oddball mouse still holds up in 2016. 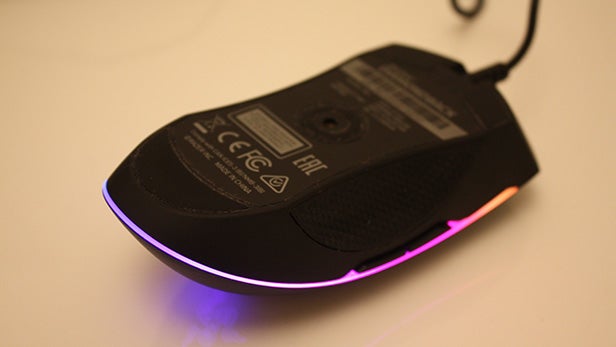 The Razer Diamondback 2015 arrives in Razer’s typically attractive black-and-green boxing, and unpacks with ease. This is a simple, wired mouse, so getting it desk-ready takes a matter of seconds.

Win the Razer Diamondback: plus other Razer peripherals in our competition.

At a glance, the Diamondback looks like your classic Razer fare; it’s dark, handsome, and glows. The materials look and feel high-end, and the it has a certain heft in the hand that you don’t get from a standard desk mouse.

But then you notice something: this thing is seriously thin. The Diamondback sports a long, svelte chassis, the sort that’s seldom seen in the modern age of gaming mice. I’ve compared mice to chocolate bars in previous reviews as a weight reference, but this is the first device to actually nab a Dairy Milk’s actual form factor. This elongated, symmetrical design is partly to the end of making the device ambidextrous, but it’s also harking back to the original 2004 model – and therein lies the problem.

My main issue with the Razer Diamondback is a direct result of the mouse’s ambidextrous design. In trying to please everyone, Razer will disappoint most. While the Diamondback might work as a very niche pick for a mouse that’s used by multiple users, or a player who prefers to work with both hands, it’s hard to recommend for a lone righty or lefty.

The awkward ergonomics of the mouse also mean that, despite the high-end sensor, positioning the device in twitch moments can be awkward. It’s obvious that mouse design has come a long way since 2004, and the Diamondback was a little quirky even then. The button symmetry – two on either side – means that two buttons are always too awkwardly positioned to use, and become useless.

The absence of curves also means there’s no good way to grip onto the Diamondback’s frustratingly angular body. I sit here, desperately clutching onto Razer’s jagged mouse, my ring and pinky fingers dragging lifelessly across the mousemat, longing for more contemporary design. I pick it up each day and think: “Oh, not this thing again…” 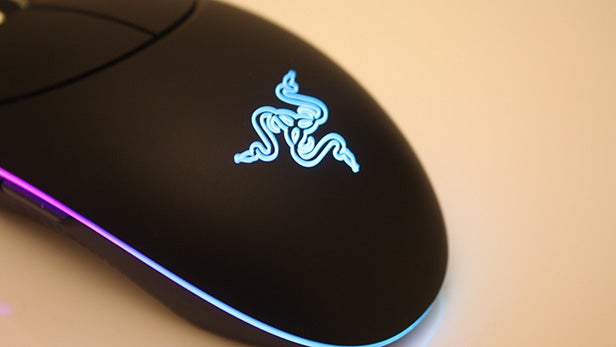 This mouse in a minimalist affair, so features are few and far between. There are a total of seven programmable ‘Hyperesponse’ buttons, all of which can be set to do whatever you like. Note that these include the left- and right-clickers, and the textured scroll wheel. Interestingly, Razer has eschewed DPI switchers on the Diamondback, which seems odd considering the ludicrously high 16,000 DPI sensor. It’s also a shame, considering the Diamondback’s historic eSports background.

Perhaps the best feature – as is often the case with Razer products – is the Chroma lighting, a buzzphrase that didn’t exist back in 2004. It’s Razer’s in-house lighting technology that lets you customise the way your mouse glows. Chroma always looks good, but it looks absolutely phenomenal on the new Diamondback. Straight out of the box, the Razer Diamondback is a-glow with all of the colours of the rainbow, cycling smoothly around the top rim of the mouse. The scroll wheel also lights up, for good measure. Honestly, you could buy this thing just to use as an ornament – or a light fixture for your next basement rave. 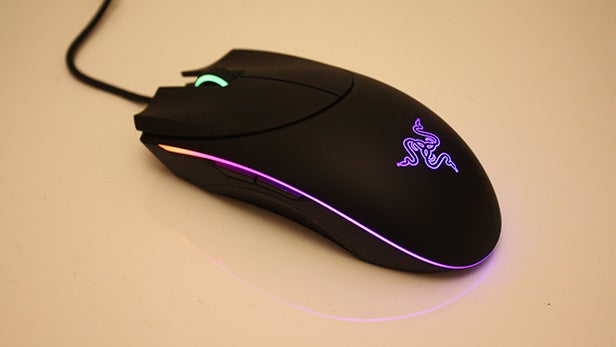 There’s little that needs to be said about Razer Synapse in 2016; Razer’s peripheral software has been tried, tested, and acclaimed.

Synapse, which works with Razer’s entire range of peripherals, gives you complete control over how your mouse performs. Part of that includes customising Chroma lighting, including synchronising the glow with other devices (like a keyboard).

As always, you can assign profiles to specific games too. That means the Razer Diamondback will automatically choose certain settings based on whether you’re playing Star Wars: Battlefront or Starcraft 2.

The only real prickle with Synapse is that it’s cloud-based, so there’s no physical storage on the mouse. That said, logging in at a friend’s house is easy enough, so don’t let this put you off.

Overall, the software is as good today as it ever was, and the Razer Diamondback fits snug into the Synapse fold. 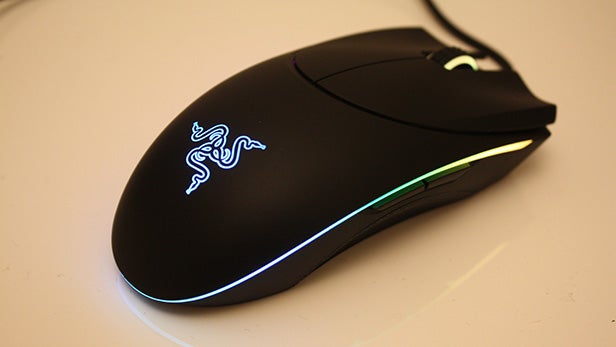 While the design might be iffy, Razer has yet again nailed the performance. The Razer Diamondback comes equipped with the company’s 5G sensor, which has a top-end DPI of 16,000. That might sound unfathomable to you or I, but a well-trained gamer with a 4K/UHD monitor could probably make good with that kind of sensitivity. Honestly, most users will end up running sub-5,000, but Razer wants to target as many gamers as possible with its wide DPI range.

Other perks include the 50g acceleration – that’s 210 inches per second – and the 1,000Hz ‘ultrapolling’. That sort of polling rate (how many times per second the mouse pings the computer) is well above the 500Hz benchmark that’s suitable for pro gaming, but it’s a seller for those who want maxed-out rigs. 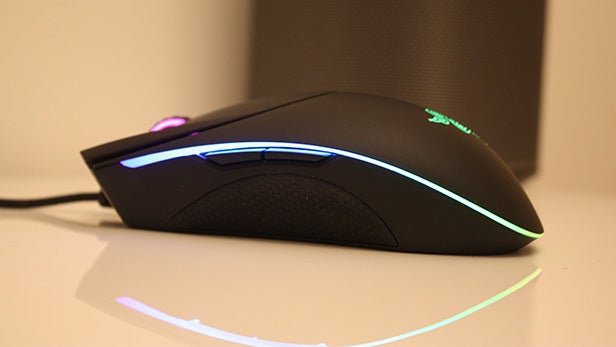 Razer Diamondback 2015 – What games work best with this mouse?

So what is the Razer Diamondback actually good for? With its lack of usable buttons, you should probably steer clear of hotkey-heavy MMORPGs – try the Razer Naga instead.

In theory, the Diamondback should work well for game genres that traditionally have a low number of controls; think MOBAs, first-person shooters, and action RPGs.

In reality, however, the Diamondback was an utter pain to use on Counter Strike and League of Legends. Both rely on accurate cursor placement, which was difficult with the Diamondback’s awkward design. The thin, light body made it incredibly difficult to master twitchy mechanics, negating much of the 5G sensor’s accurate tracking.

If you’re playing casually, and you don’t rely of pinpoint cursor accuracy, the Diamondback is fine for most gaming. But if you’re a competitive multiplayer gamer, there’s a lengthy learning curve here that’s almost certainly not worth it. Heck, I used it for three weeks and I’m still not having fun with this mouse. 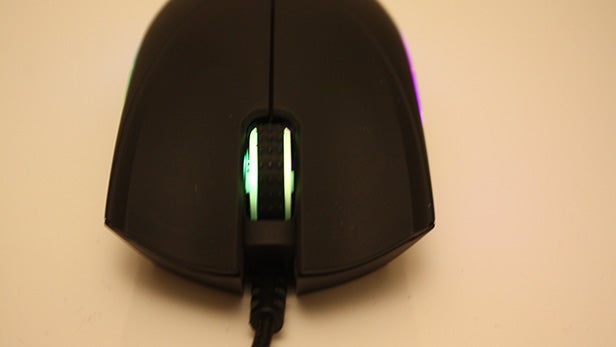 Should I buy the Razer Diamondback 2015?

The Razer Diamondback is a generally competent mouse that has a very impressive roster of components.

Unfortunately, the inescapable problem with the Razer Diamondback is its awkward design. Razer’s success with the mouse in 2004 was partly down to a lack of good competition, but 2016 is rife with formidable contenders. The fact that none of Razer’s other mice look like the Diamondback is testament to its dodgy ergonomics.

As such, we’d recommend alternatives like the Razer Deathadder Chroma, or the Logitech G303 Daedalus Apex, both of which are slightly cheaper than the Diamondback. And for the same price, Razer’s Mamba Tournament Edition is a better buy.

The original Razer Diamondback departed in 2007. It should have remained dignified in death, rather than being reborn in the shape of this oddball Frankenmouse.

The Razer Diamondback has gorgeous lighting and more-than-capable innards, but clumsy and outdated design makes this mouse tough to recommend.