The Razer Blade 15 2020 Base Model is a great gaming laptop, featuring a speedy Full HD performance, industry leading design and a bright, colourful display. It is pretty expensive when compared to rival systems, but this is still a worthwhile buy for gaming enthusiasts.

The Razer Blade 15 (2020) is one of the classiest gaming laptops I’ve ever used. The charcoal black design and glowing green logo look snazzy, while the specs hit the mark for eSports-grade gaming.

With an RTX 2070 GPU, 10th Gen Intel Core i7 processor and 144Hz refresh rate, the configuration I have here is essentially the top-of-the-range ‘Base model’.

Razer offers an even more powerful range called the ‘Advanced Model’ with significantly more powerful specs, but that will cost you well over £2000.

The ‘Base Model’ on review here looks to be the superior option for most gamers, still flaunting high-end features such as ray tracing and DLSS but at a more reasonable price.

The Razer Blade 15 (2020) looks almost identical to its predecessors. The jet black aluminium chassis is iconic these days, as is the green logo which lights up once you lift up the lid.

Build quality is top notch, with the laptop feeling robust and smooth to the touch. However, as with previous Razer laptops, the metal surface is prone to greasy fingerprint marks which can make it look grimy after a day of use. 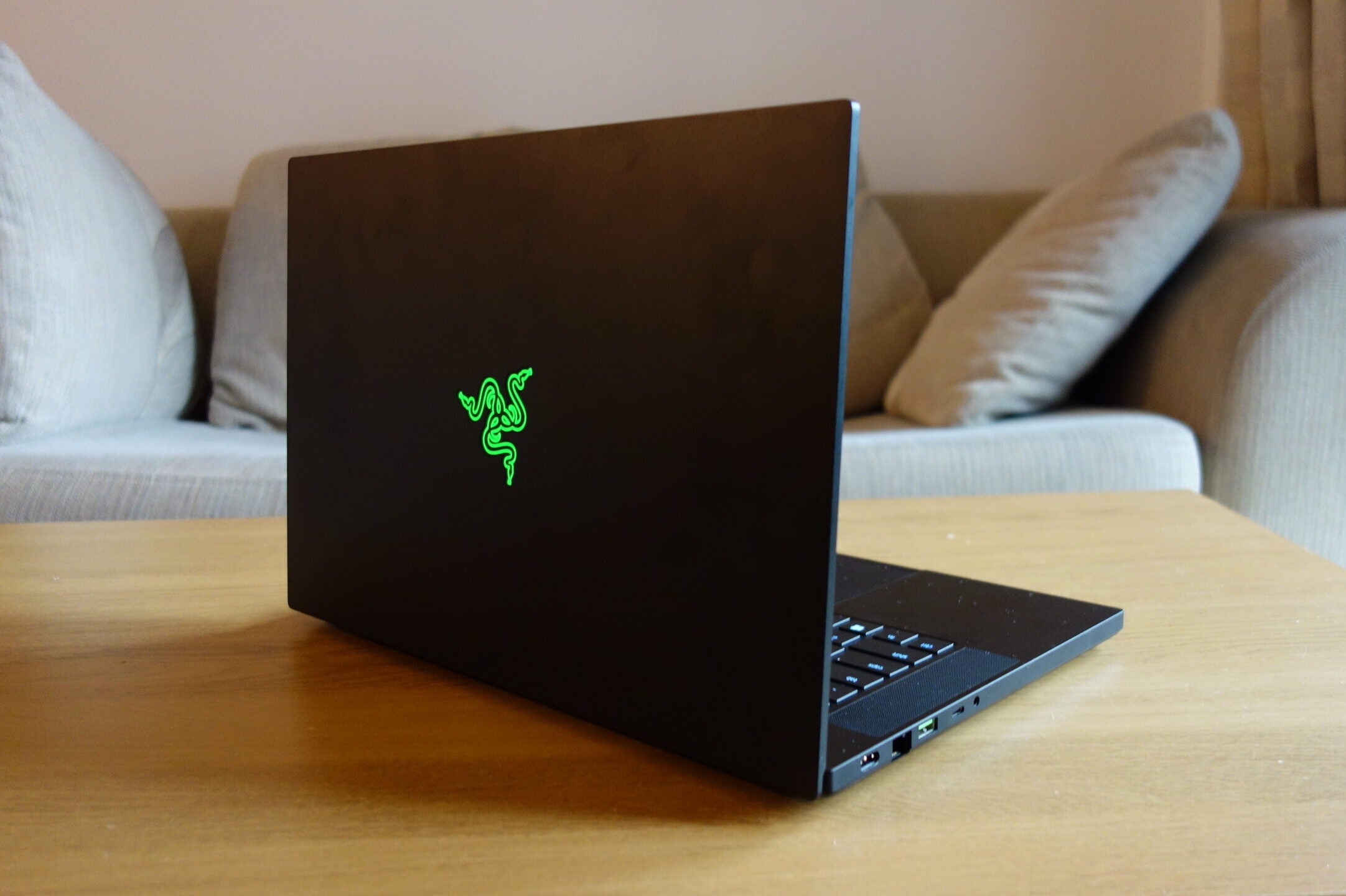 The new Blade 15 laptop has an approximate weight of 2.1kg, which is standard for gaming laptops these days. The Asus ROG Zephyrus G14 has recently raised the portability bar for gaming notebooks – weighing a dainty 1.69kg – but that’s not really possible with the specs the Razer is packing.

It’s a fairly heavy laptop, but is easy enough to carry around in a small bag. But since you need it plugged in for the optimal gaming performance, you’ll want this laptop to be rooted to a desk for the most part. 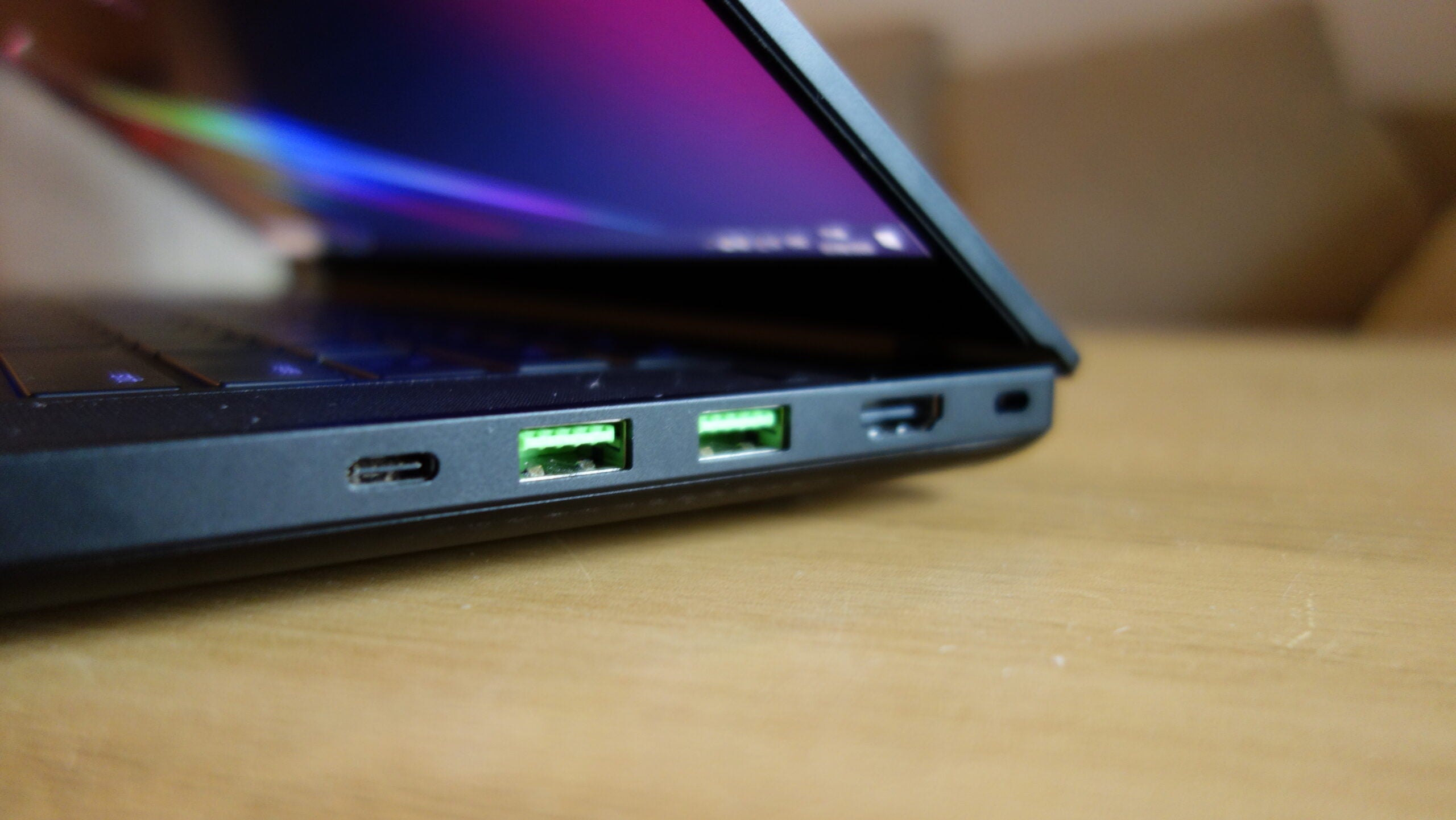 There’s an excellent selection of ports here. Gigabit Ethernet, HDMI 2.0, USB 3.2 Gen 2 and a headphone jack all feature, while there’s also Thunderbolt 3 which can be used for data transfer and display output. The Base Model unfortunately misses out on an SD Card reader.

You also get a 720P web camera, although it lacks Windows Hello support for facial recognition. There’s no fingerprint scanner here either.

One of the greatest strengths of Razer laptops is the Synapse software that comes pre-installed. This allows you to configure macros and customise the RGB light show (with up to 16.8 million colours) on your keyboard. Few other laptops allow such fine-tuning of the lighting, complete with dynamic lighting effects.

Alternatively, you can turn the lights off completely, which is handy if you want the Blade to double up as your office laptop. 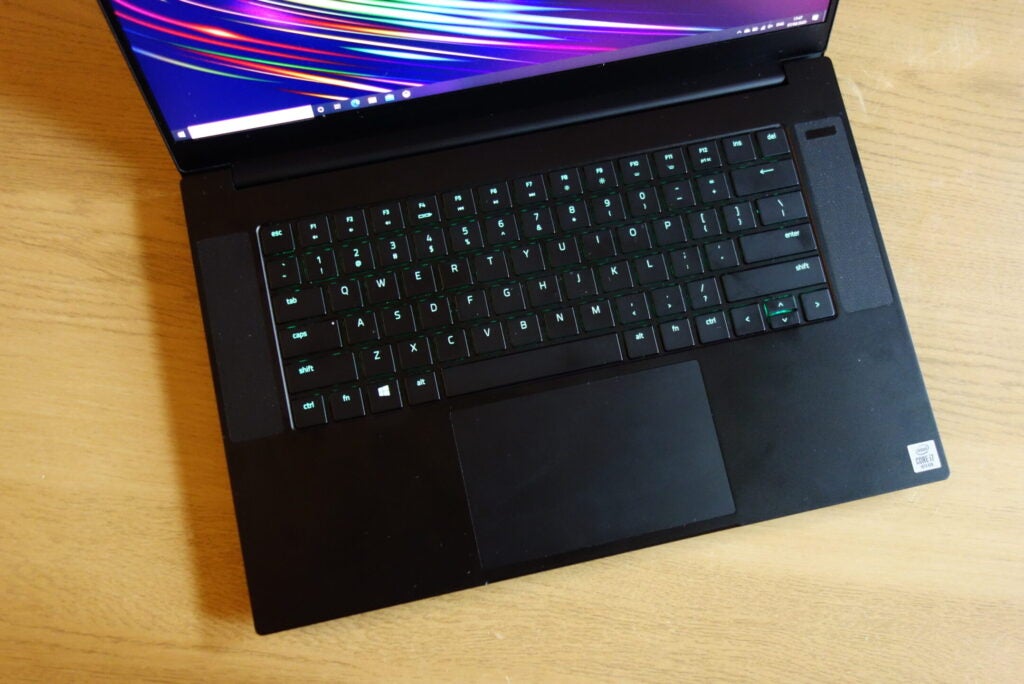 Razer has tweaked the keyboard layout for the 2020 model, and I personally think it’s for the worse. The up/down arrow keys have been squashed down in half, making it irritatingly difficult to navigate games that make use of such controls. Fortunately most games make use of WASD instead, but there are exceptions such as Crusader Kings 2.

On the plus side, the changes to the arrow keys have allowed Razer to stretch out the right-sided Shift key which is useful for the likes of first-person shooters.

The actual feel of the keys is okay. The travel is a tiny bit shallow, at least for a gaming laptop. And there isn’t a lot of clicky satisfaction here like with the Gigabyte Aorus 15G.

The trackpad is satisfyingly large and responsive, but I still recommend using a gaming mouse when gaming.

Razer has a great knack for making top quality screens for its gaming laptops. What’s more, this model boasts a 144Hz refresh rate to keep up with fast-paced action in eSport games.

The Blade has an above-normal peak brightness (427 nits) allowing colours to look more pronounced, and giving an extra gloss to in-game visuals. 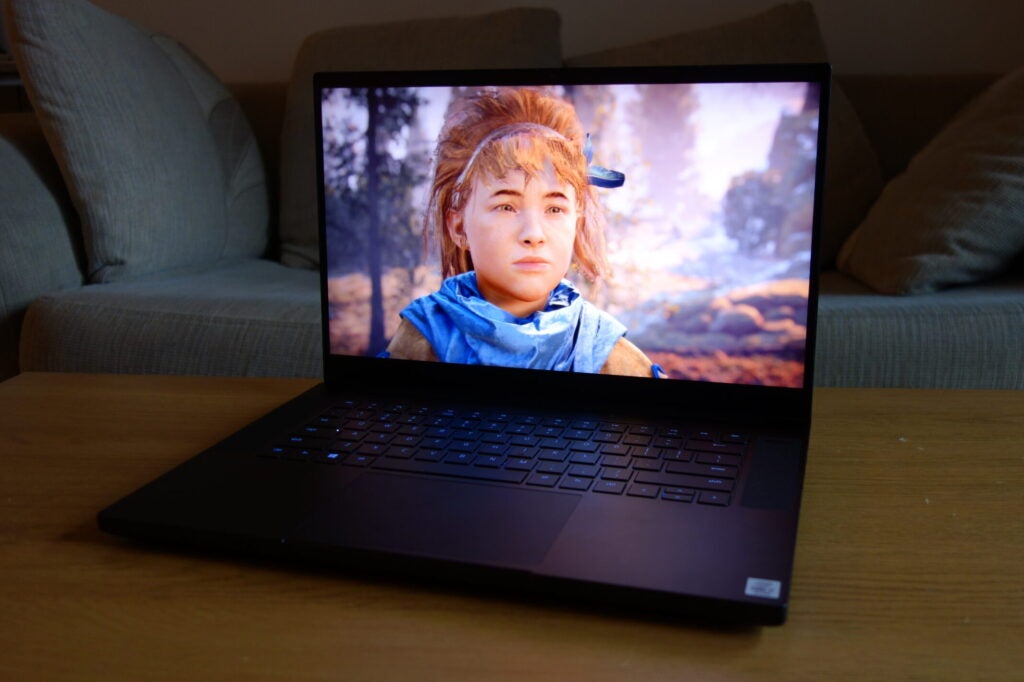 The black levels aren’t so great, leaving dark colours and environments lacking the desired detail. This also drags the contrast ratio down to 898:1, missing out on the 1000:1 target. This is a shame, as it means dark and light colours won’t stand out from each other as much as they do with other gaming laptops. But when watching the likes of Netflix, I didn’t really notice an issue.

I also played the richly coloured Borderlands 3, as well as the highly detailed Crusader Kings 3, both of which looked gorgeous on my Razer’s screen. I really doubt you’ll have an issue with the display.

Colour accuracy isn’t high enough for content creators on my Full HD model, but Razer also offers a 4K OLED option for £300 more. 4K isn’t available on the GTX 1660 Ti and RTX 2060 models, but they don’t really have the graphical grunt to take advantage of such high resolutions.

There are many other GPU picks between those two, including my RTX 2070 model which sits at the top of the Base Model range with a £2099.99 price. Despite its high price, this can be considered a mid-range gaming laptop, and goes up against the likes of the HP Omen 15 (2020) and the Gigabyte Aorus 15G.

As you can see in the above GPU benchmark test, the Razer Blade 15 lags slightly behind the competition, despite being the most expensive option. That said, the Full HD (with max graphics settings) in-game benchmark results for the likes of Shadow of the Tomb Raider and Borderlands 3 saw a minuscule difference compared to the Omen 15.

Judged independently, the Razer’s results were very impressive. The Blade hit 77fps in Full HD in Horizon Zero Dawn which is one of the most graphically impressive games currently available. I also saw around 120fps in Apex Legends, which means you should be able to take full advantage of that speedy refresh rate.

Rather surprisingly, the Razer Blade 15 also struggled to keep up with the HP Omen 15 in the CPU benchmark tests, despite featuring the same Intel Core i7-10750H chip. Does this really matter in practise though? Not really. The Blade 15 aced day-to-day tasks, speeding through web browsers and the like.

With such a performance, you’d easily be able to engage in some photo- and video-editing, although you’ll probably want to opt for the 4K screen if that’s important to you.

My biggest qualm with the Razer Blade 15 performance is that the laptop can heat up to uncomfortable temperatures when gaming. Both the metal chassis and the keyboard become warm fairly quickly. You won’t want to have this laptop on your lap for prolonged periods.

It can also get fairly noisy. A noticeable hum can be heard when gaming, which sounds almost like a distant vacuum cleaner.

The Razer Blade 15 also comes with a speedy 512GB SSD. There’s unfortunately no 1TB option, but that would push up the price considerably.

To get the best performance out of the Razer Blade 15 (2020), you’ll want to make sure it’s plugged into the mains. However, as a portable it’s always nice to have a long-lasting battery for the likes of productivity work and Netflix.

Our PCMark 10 battery benchmark test, which involves simulating day-to-day office tasks until the battery tank depletes, saw the Blade 15 last around 3 hours and 35 minutes. That’s a typical score for a gaming laptop this powerful. Of course, playing games on the go will deplete the battery even quicker. I only managed between one and two hours of play when conquering land in Crusader Kings 3. 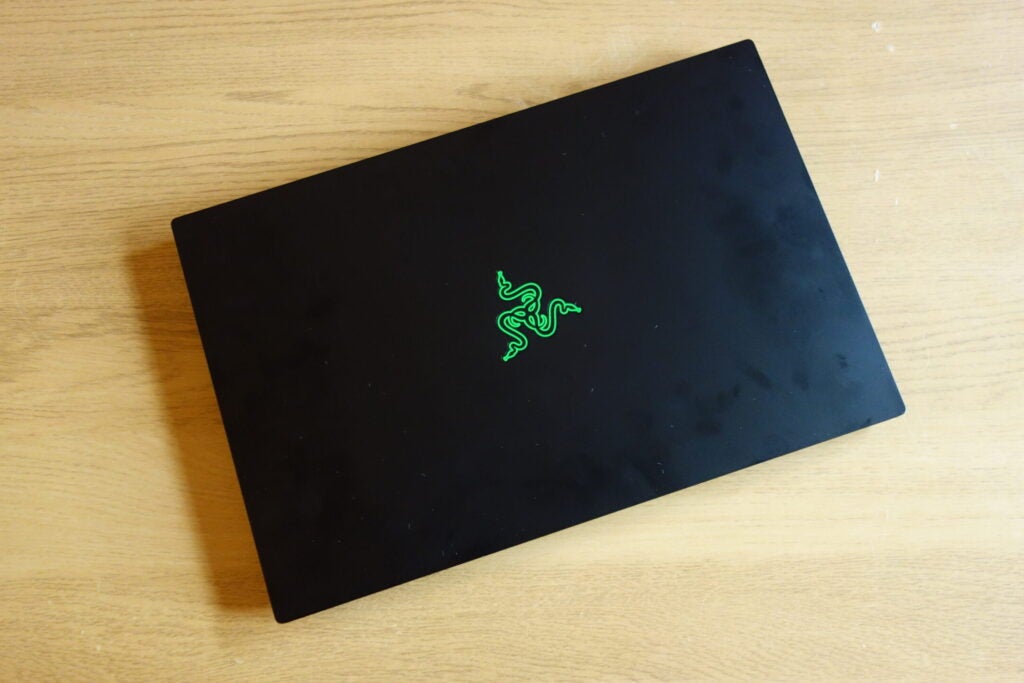 If battery life is a priority, you may be interested in the Asus ROG Zephyrus G14 instead, which lasted over six hours in the same test. It isn’t quite as powerful as the Razer, but there isn’t a huge performance gap.

The Razer Blade 15 (2020) Base Model is a great gaming laptop, boasting one of the most robust and stylish designs I’ve seen. Razer offers a range of configurations too (including the even more powerful Advanced Models) allowing you to fine tune the system to your preference.

But while the Full HD performance is solid when viewed independently, it isn’t quite as efficient as the competition. The HP Omen 15 consistently bettered the Blade 15 in our tests, despite the latter costing a couple hundred quid more. The Razer also gets noticeably hot after prolonged sessions of gaming, which isn’t ideal.

Still, if you love the stylish Razer brand and want access to the company’s superb Synapse software for lighting customisation and macro features, then the Razer Blade 15 (2020) Base Model will serve you well.