What is the Raumfeld Stereo L?

German brand Raumfeld specialises in Wi-Fi speaker systems that stream music in high resolution (up to 192kHz/24-bit). It isn’t a household name in the UK but after hearing the company’s Stereo Cubes in action we think it deserves to be – with slick streaming and refined sound quality, it’s a compact system to be reckoned with.

The Stereo L is a bigger, pricier proposition than the Cubes and the world’s only floorstanding speaker capable of multiroom streaming. The system comprises a pair of floorstanding speakers, one passive and one active. The active speaker is equipped with a 400W amplifier, Cirrus Logic DAC and a Wi-Fi module that allows you to play music over a network or from streaming services. Its ability to stream in ‘true high fidelity’ stereo is sure to pique the interest of audiophiles keen to hear their digital music collection in the best possible quality. 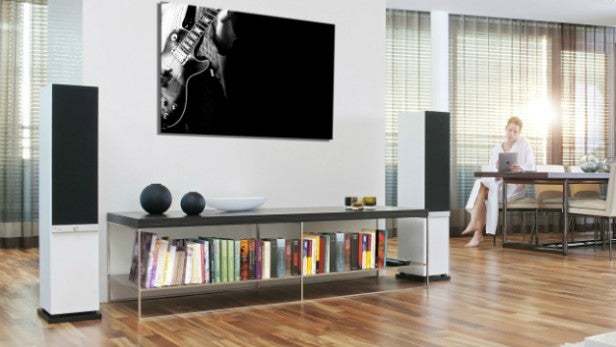 The Stereo L floorstanders are big and imposing but gobsmackingly good-looking. Standing a princely 1145mm tall by 220mm wide, they’re finished in a luxurious white lacquer that contrasts stylishly with the large black magnetic grilles. These grilles rest on a brushed silver block bearing the Raumfeld logo, while the whole thing sits on a thick black plinth that creates a gap for the bass reflex vent at the bottom. 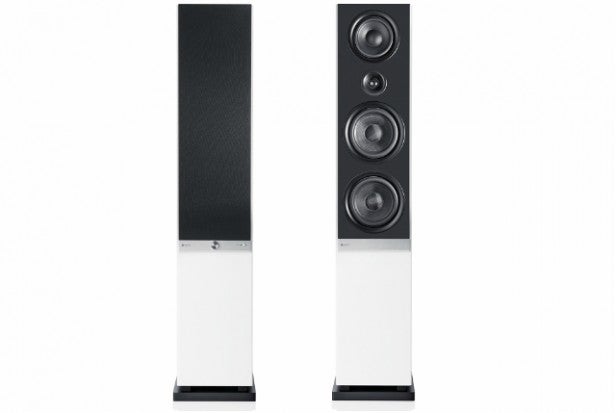 Build quality is phenomenally good, every bit as robust and rigid as we’d expect for the money, although at 27.5kg and 24.2kg we don’t recommend lifting them out of the box without help. Pull off the grilles and you’ll expose a 130mm midrange driver, two 170mm woofers and a 28mm tweeter, all housed in a thick metal baffle that adds to the overall sense of luxury. 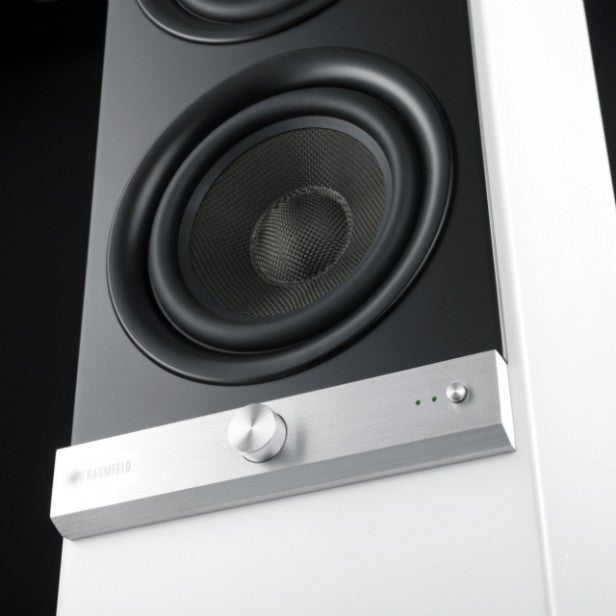 There are a few controls in the silver block below the grille, including a volume dial, two LED status indicators and an on/off button. There’s no dedicated remote control for the system – everything is orchestrated by Raumfeld’s free smartphone app, which we’ll explore in more detail later.

On the back of the active speaker you’ll find an analogue RCA input, an Ethernet port, a USB port (which allows you to play music directly from flash drives) and a Setup button. At the bottom is a set of binding posts to connect the master speaker to the passive speaker.

You’ll also find two pairs of speaker terminals that let you connect the Stereo Ls to an external stereo amplifier and use them as conventional passive speakers.

Both speakers use a three-way crossover with a 130mm cellulose midrange driver, two 170mm carbon membrane woofers and a 28mm fabric dome tweeter. Inside the active speaker are a 400W amplifier and a Cirrus Logic digital-to-analogue converter that handles audio files up to 192kHz/24-bit. 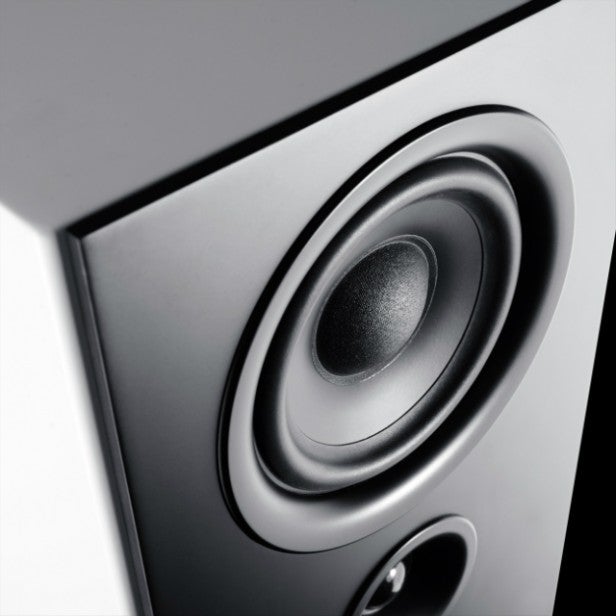 Stereo L can stream music from servers on your home network or online streaming services. All of these sources are accessed from the free Raumfeld app for iOS and Android devices. At the time of writing the streaming services include Spotify, TIDAL, WiMP, TuneIn radio, Napster and Last.fm Scrobbler.

The much-publicised TIDAL has been added to the roster since we tested the Stereo Cubes and is a great source for CD-quality music to test out Stereo L’s hi-res capabilities, although obviously you’ll need to pay £20 a month for the TIDAL HiFi subscription (or £10 for the lower-quality Premium tier) and own a smartphone capable of handling the lossless FLAC streams.

Stereo L can be used as part of a multiroom system. You can stream music fed into the Stereo L’s analogue line inputs to speakers in other rooms by selecting the relevant source in the app.

To set up the system, the first thing you need to do is install the Raumfeld app on your smartphone or tablet and run the setup wizard. A series of instructions walks you through the process, throwing in some helpful illustrations along the way. Owners of Raumfeld’s optional Controller device can use it to install the Stereo L instead of a smartphone.

Annoyingly, the wizard requires you to run a LAN cable between the active speaker and the router, which was a pain given that our router is nowhere near the speakers. And after running through the whole process seemingly successfully, the app froze with no confirmation that the setup was complete. After shutting it down and returning, we found it had been completed.

During the process you’re asked if you have the optional Raumfeld Base, a Wi-Fi hub that controls all of the speakers in a multiroom system. As well as simplifying the setup procedure, Base lets you copy music onto its internal hard-drive, which automatically becomes available in the app’s ‘My Music’ section. 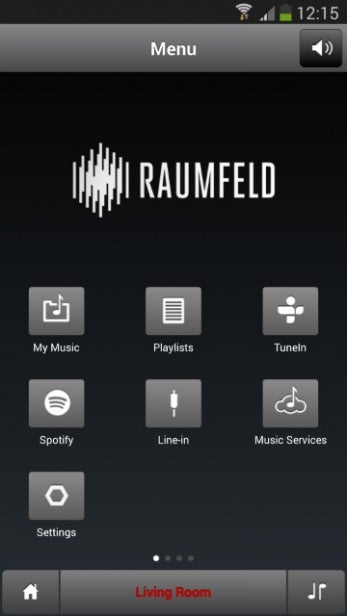 Once installed, operation is a breeze. The Raumfeld app is responsive and starts playing tracks without any delay.
Its clean, practical layout makes navigation easy, using tiles and simple icons to display its options. Spotify and TuneIn get dedicated tiles on the home page, while the rest are accessed and configured through the Music Services menu.

The My Music section displays music on DLNA and UPnP devices. Music will only appear here if after you’ve manually added the relevant servers in the Music Resources menu. You can easily create playlists of tracks or radio stations, which can also be accessed from the home page. 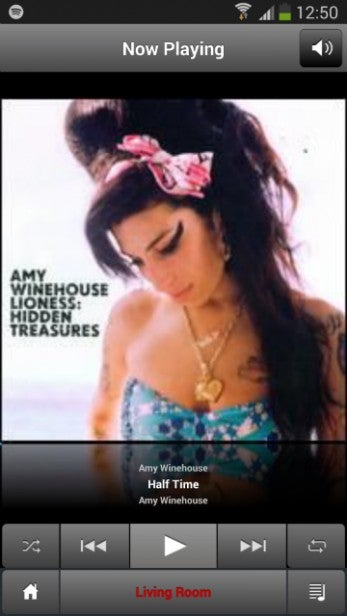 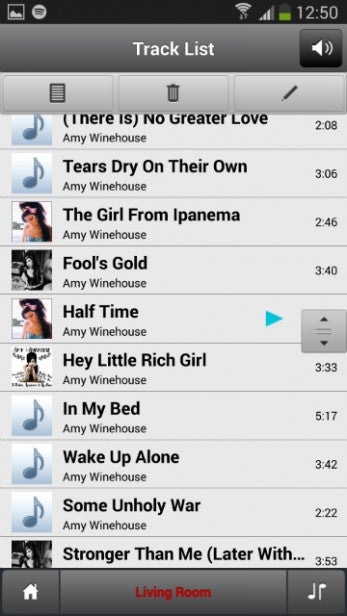 When browsing your own servers, the app pulls thumbnails from the web and displays them next to the artists, and imports cover art during Spotify playback. When playing something via DLNA/UPnP, you can switch between Now Playing and Track List views – the former includes a bank of playback controls at the bottom of the screen and a speaker icon at the top that brings up a large virtual volume dial.

Within the multiroom configuration menu, you can select which speaker is left and which is right, and tweak the treble, midrange and bass for each speaker in your network. You can also rename speakers in each room and assign them different colours.

Based on our impressions of the Stereo Cubes, which deliver an incredibly refined and entertaining sound for £400, we were expecting amazing things from these bigger, pricier speakers. They didn’t disappoint.

Poised and punchy with bags of energy and detail, Stereo L musters a remarkable sound. It laps up anything you throw its way, be it jazz, rock, pop or hip-hop – every instrument, vocal line and rhythm is played with purpose and spine-tingling clarity. It throws out a big, muscular sound that fills the room, no matter how cavernous. 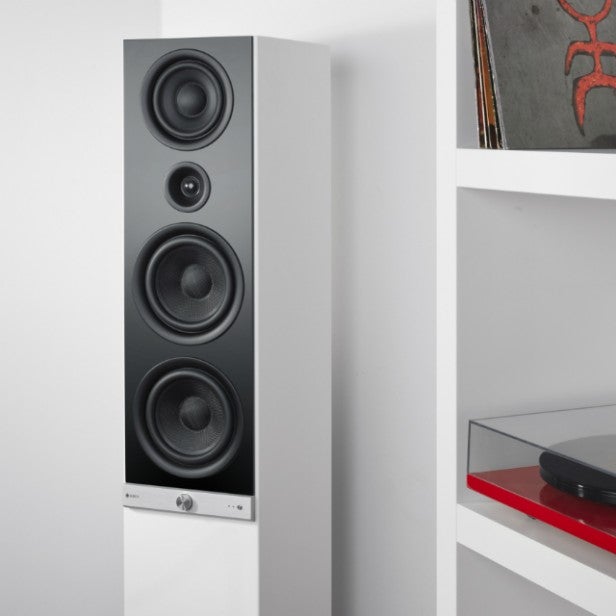 High-res music obviously shows off the Raumfeld at its very best. A 96kHz/24-bit FLAC file of Janvier Jones’ Do Without You from the album Soul Searching (Naim Label) is a treat – the shuffling percussion and cymbals are sweet and silky, while the clear, articulate midrange brings focus to Jones’ sultry voice, which is also dusted with subtle nuances. The drums and bassline sound big and authoritative thanks to the depth afforded by those dual woofers.

Even more impressive is how it polishes up lower-quality files. With 320kbps Spotify streams and even 192kbps MP3s, the music is dynamic and surprisingly textured. Sure, you don’t get that hi-res sheen and sparkle, but if you’re going to listen to compressed music this is the way to do it.

Play Lost Outtake by jazz-funk outfit Tristan on Spotify and there’s a crisp, glassy edge to the piano solo that you only get from tweeters at the top of their game, while the vocals are silky and natural.

Skip to the uptempo track Falcon and the snare drums have a sharp slap every time the stick hits skin. Brass lines stand proud and the live bassline grooves along with great agility. Details like this really draw you into the music.

What also stands out is the Stereo L’s deep bass. With two woofers in each speaker and plenty of cabinet depth, it’s no surprise that songs are swimming in rich, solid low frequencies. But it’s not just a messy rumble – they have real control and definition. Bass notes start and stop precisely and stay locked to fast rhythms. House kick drums are hard-hitting but not boomy.

Admittedly there might be a little too much bass here for some tastes. This is definitely a system aimed at those who like their music deep and chunky – fans of a leaner, more neutral sound might not be too keen. But thankfully it doesn’t come at the expense of midrange or treble clarity – both are given room to shine. 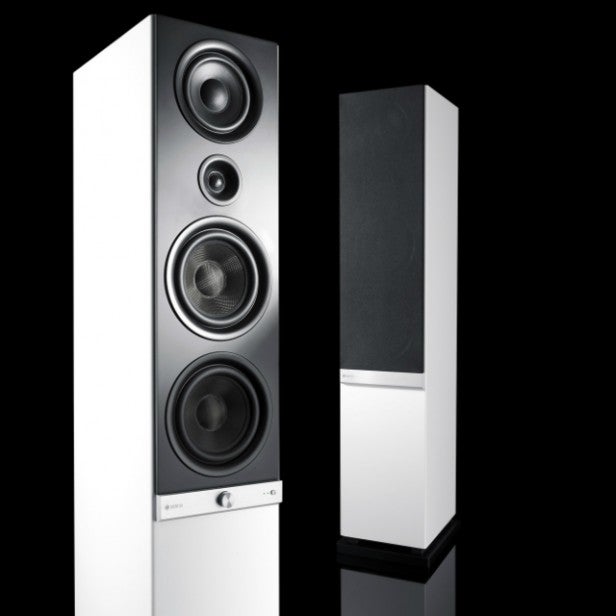 Should I buy the Raumfeld Stereo L?

The Stereo L isn’t cheap, but if you’re after true hi-fi sound quality then it’s worth the expense. In fact, after spending time with these superb speakers we’re surprised they don’t cost more.

Being floorstanders, they bring a sense of scale and room-filling power to streamed audio that compact systems simply can’t match, but with the convenience of built-in amplification and Wi-Fi. The high-end driver array, astonishing build quality and ample cabinet volume result in sweet high frequencies, clear midrange and tight, weighty bass – particularly when streaming hi-res audio, which lets you enjoy music in the best possible quality.

And as the world’s first floorstanding multiroom speakers, they also make a superb centrepiece for your home’s audio network, ably orchestrated by Raumfeld’s terrific smartphone app. On the downside, the slightly overzealous bass output might not please fans of a leaner, more transparent sound, and Bluetooth would have been nice. But these are a minor gripes – in every other respect, Raumfeld has a hit on its hands.