What are the Raumfeld Stereo Cubes?

German brand Raumfeld specialises in multiroom streaming systems and recently launched its range of products in the UK. Among them are the Stereo Cubes, a pair of compact streaming speakers that let you play audio files, online music services and internet radio via their built-in Wi-Fi – all orchestrated by Raumfeld’s smartphone app.

They’re a pair of cube-shaped speakers – one active, one passive – that deliver true stereo sound, which is unusual in the streaming speaker market. But an even bigger selling point is their ability to stream lossless audio formats like FLAC and WAV in their native form, without converting them to lower quality as some streamers do. 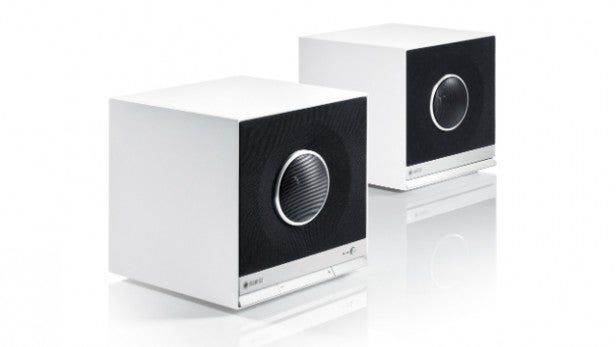 Much like fellow German audio brand Teufel – which acquired Raumfeld in 2010 and has won plenty of plaudits from Trusted Reviews over the years – Raumfeld’s goal is to deliver audiophile sound quality without the wallet-busting prices normally associated with high-end hi-fi, something it achieves by selling products direct to consumers through its website. 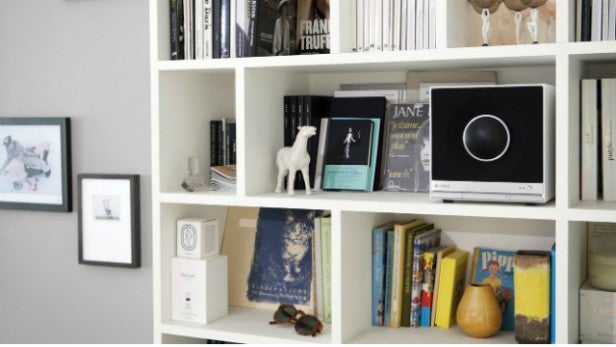 And like its stable mate, Raumfeld places an emphasis on high-quality design, which means the Stereo Cubes are both attractive and beautifully made. The robust MDF cubed cabinets sport a tactile lacquered finish and thick rubber feet on the bottom to quell vibrations. At 195mm wide by 195mm deep, they’re compact enough to sit on furniture or shelves without much upheaval. 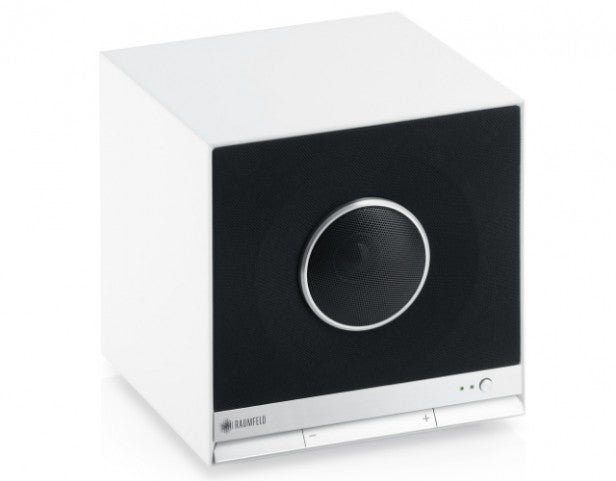 There’s something delightfully Teutonic about the stark styling, rigid lines and striking silk white finish, although if white’s not your thing then they also come in black. The front is covered in black cloth with a silver-ringed mesh dome in the centre, behind which lurks a midrange driver and tweeter in a coaxial arrangement (the tweeter sits in the middle of the midrange driver). 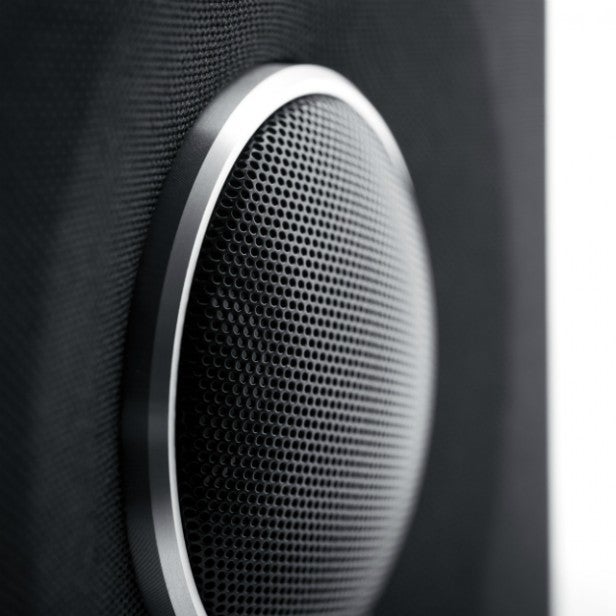 A sloping silver panel adorns the bottom of both speakers, but on the active (left) cube it plays host to the volume buttons. The left speaker also features an unlabelled on/off button and two small lights that indicate the power and system status.

On the back of the left speaker you’ll find analogue stereo inputs to hook up devices the old fashioned way. If you connect an analogue source to these inputs, the integrated converter turns it into a digital signal that can be sent to other Raumfeld devices in a multiroom setup.

You also get Ethernet and USB ports, the latter allowing you to play music from storage devices. Also on the back are reset and setup buttons, plus a 6.3mm output that sends audio to the Slave speaker using the supplied cable.

The master Stereo Cube contains the Wi-Fi module and two-channel Class D amplifier, which supplies 80W to each speaker. The speakers use a 28mm fabric tweeter and 130mm midrange driver in a two-way design, alongside a bass reflex system with two vents on the front of the speaker (which you can see if you remove the cloth grille).

The Stereo Cubes support a wide range of audio formats, including MP3, WMA, WAV, AAC, FLAC, OGG and ALAC, with support for sample rates up to 192kHz (provided your router has the necessary bandwidth) and gapless playback.

You can play music stored in your Android or iOS device or stream it from PCs, NAS drives or other UPnP/DLNA music servers. At the time of writing, Spotify, WiMP, Napster Last.fm and TuneIn radio were available through the app, but Raumfeld is planning to incorporate other services in the future. 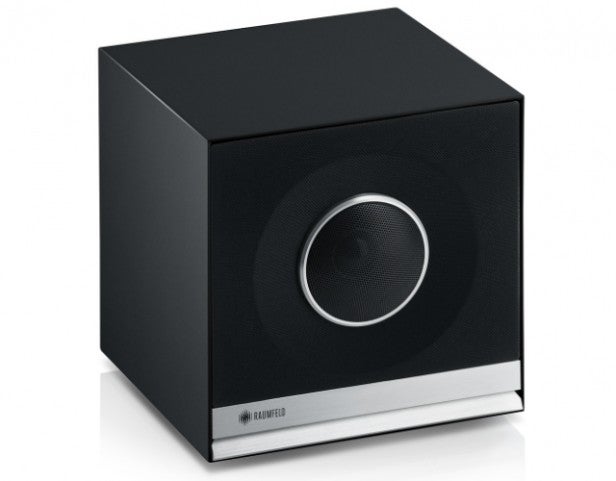 The only major omission here is Bluetooth, which would have been useful for quick, hassle-free music playback or as a back-up if the Wi-Fi connection plays up.

Streaming speakers can be a pain to set up compared with traditional hi-fi systems, but to Raumfeld’s credit the Stereo Cubes are relatively easy to install. You have to download Raumfeld’s app onto your smartphone before you start, which includes a helpful setup wizard that takes you through the process step-by-step. 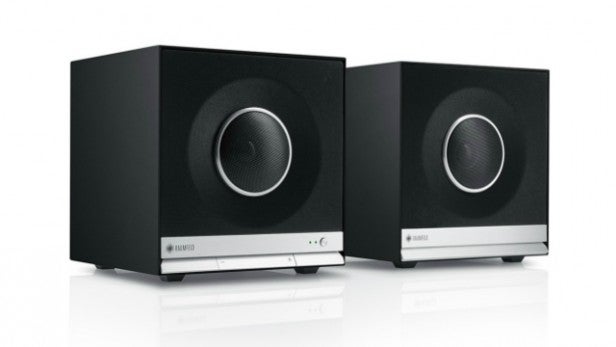 There was still a fair amount of frustration before we got it working though. Part of the process involves connecting the master Cube to your router via Ethernet, which in our case meant unplugging everything and decamping to the same room as the router. We also found ourselves staring at blinking lights for quite a while before it established a connection.

We got there in the end, but it’s far from the plug ‘n’ play experience we hoped for. Raumfeld recommends using its optional Base as an access point in a multiroom setup, which theoretically makes setup easier but adds more expense.

Of course the other downside of all this is that a smartphone or tablet is essential. Unlike most wireless speakers, there’s no option to install the Cubes using a PC browser.

However, the app itself is attractive and easy to use. Its clean, logical design and tile-based home screen make navigation a cinch. Operation is slick, and interaction with Spotify is seamless. 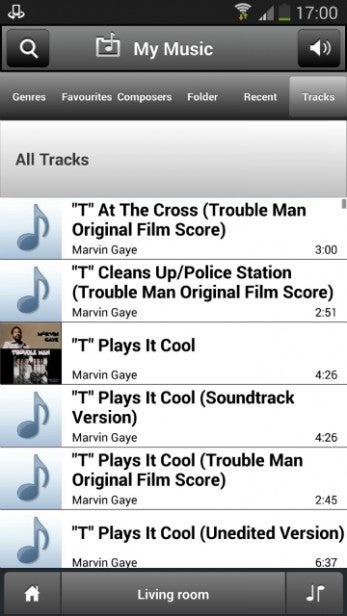 To play music from DLNA/UPnP devices, you have to select which ones to include in the app’s Settings menu. Shared tracks should then appear in the ‘My Music’ menu. 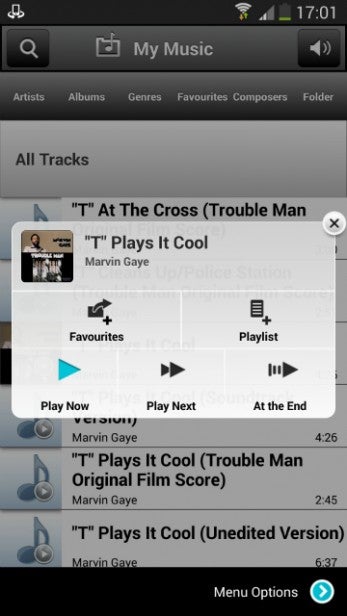 Music is arranged into lists with artwork thumbnails at the side and different sorting options at the top. It even downloads pictures of the artists in your library, which is a nice touch. You can search your library by keyword and create playlists. Play a song and it expands to full screen with larger cover art and playback controls. 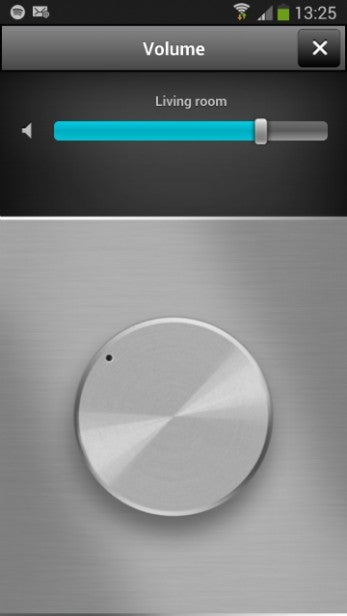 The app also lets you configure multiroom playback, allowing you to assign different colours, rename speakers and tweak the EQ for each device. You can also swap the speaker channels, or make both play the same channel.

Raumfeld offers an eight-week trial for all its products with a no-quibble returns policy if you’re not happy. But after hearing the Stereo Cubes in action we doubt you’ll take them up on it. The Cubes’ sound is deeply impressive, high on refinement and power with a pleasing balance across the frequency range.

At the bottom end, bass is tight, propulsive and seamlessly integrated. Playing Dutch band Tristan’s 2nd Phase album on Spotify, the Cubes convey the funky, intricate basslines with astonishing agility, locking every pluck tightly to the drum beat. The groove has depth and heft but it’s not overpowering. 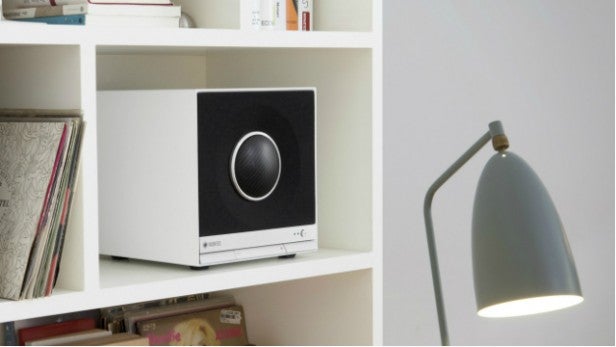 That allows other elements of the music to shine through, such as the crisp brass licks and sparkling percussion. Cymbals crash and slide with impressive precision and clarity, without sounding forced or unnatural. We could pick out the rattling edge of every snare drum hit, and vocals have a pleasing tone. The single-point driver arrangement works well in this respect, resulting in a direct and focused sound.

Detail clarity gets even better with hi-res music. We streamed a 96kHz/24-bit FLAC file of All Will Surely Burn by Sons of Kemet and the Raumfeld brings the extra detail to the fore, adding vigour to the drumming and a raspy texture to the meandering trumpet solos. The whole thing has a live, in-the-room feel. 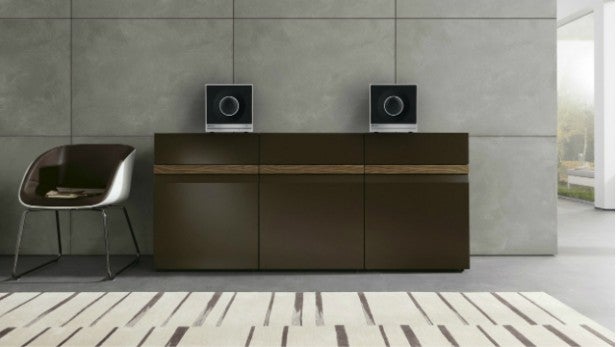 And with two Cubes providing a stereo stage, imaging is terrific. Instruments are clearly and accurately organised within the track’s spacious stereo landscape, making sense of the complicated production.

The speakers have enough puff to fill a large room, which will serve you well during parties, although they do lose some of their composure when you turn the volume up loud. Bass begins to bloat and a slightly hard edge creeps in, but that’s the only real flaw in an otherwise superb performance. 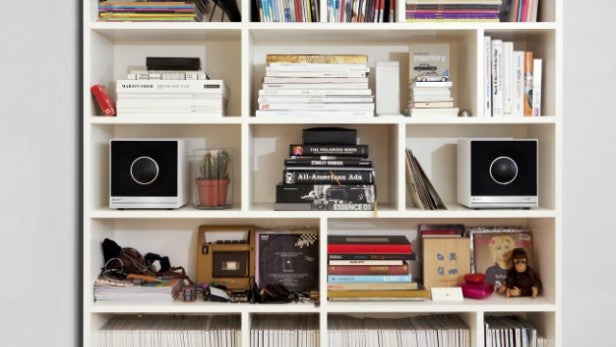 Should I buy the Raumfeld Stereo Cubes?

With their stark, eye-catching German design and polished sound quality, the Stereo Cubes are an impressive streaming proposition. Hi-res support and multiroom functionality will win them plenty of fans, while the true stereo setup steals a march on similarly priced mono systems.

The price may look steep on paper, but it’s fairly reasonable considering how much some companies would charge for a system of this calibre.

There are downsides, though. Those without smartphones need not apply, there’s no Bluetooth and the setup procedure is a little frustrating. The system also loses composure at louder volumes, but there are enough positives elsewhere to make the Stereo Cubes a worthy purchase and hint at a bright future for Raumfeld in the UK.