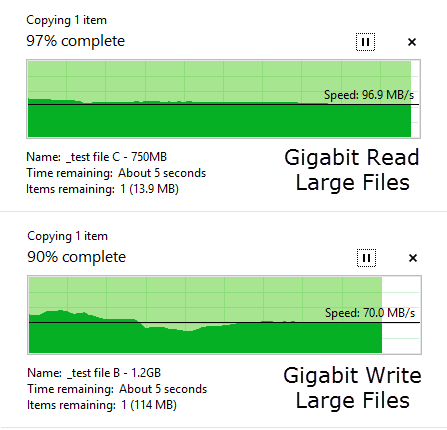 In previous tests we have found Intel-based NAS to perform more slowly than the latest ARM chips. Most notably the Intel-based Synology DS415play was comprehensively outperformed by its own DS414 and – despite the step up from the Atom in the DS415play to a Celeron processor in the QNAP – it remains a similar story here.

Transferring large files across our test network the HS-251 achieved read and write speeds of 96.9MBps (775Mbps) and 70MBps (560Mbps). The former is identical to the DS415play with the write lagging slightly behind the 76.1MBps achieved by the Synology. Write speeds in particular is lower than we’d like.

Surprisingly it was a similar story for the Celeron-based HS-251 with our more processor intensive small files test. This passes a 2GB folder of over 1,000 files across the network and saw the HS-251 fight for read and write speeds of 28.3MBps (226.4Mbps) and 16.7MBps (133.6Mbps) respectively. Somewhat slower than the 35.5MBps reads of the DS415play, but a little faster than its 15.1MBps writes.

Either way both media-focused NAS fall well behind the ARM-based Marvell Armada XP chip in the DS414. That charged through the large file test with 112MBps reads and 97.3MBps writes and small file reads and writes of 52.9MBps and 43MBps respectively.

So is the performance hit worth the media benefits? For many NAS owners the answer may be no, but given the target market here and the success with which the HS-251 performed its media duties we’d say yes.

While transcoding always throws up the occasional error, they were few and far between and the NAS has no trouble transcoding Full HD video on the fly. Audio and video sync perfectly as well though you won’t be able to skip ahead without a small wait given the transcoding happens as you need it. Similarly you can cause the transcoding to stutter if you transcode multiple Full HD streams to different destinations simultaneously, something we can only see being a problem in large, very tech savvy families. 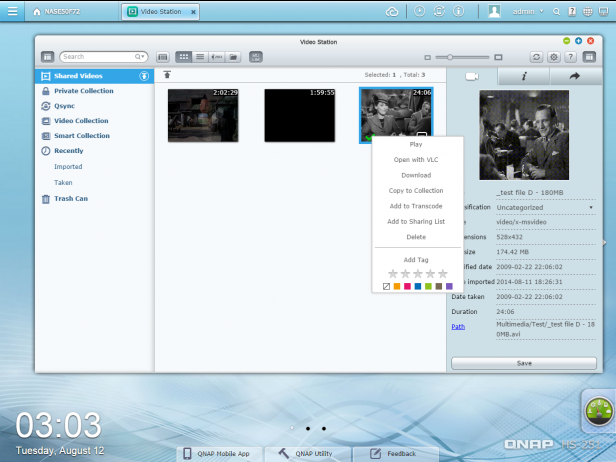 This slick experience is also bolstered by the HDMI port, a disappointing absence from the DS415play. This negates the need for an intermediate device though given the proliferation of WiFi-enabled smart TVs that can access a NAS over a network and play stored files natively via wide codec support it isn’t the only solution. Still it cuts out a step.

Finally we have audio performance and given the fan-less nature of the HS-251 it was very quiet indeed recording just 25 decibels, most of which came from the drives inside. There is a big downside to the fan-less construction though and that is the NAS gets very hot. We recorded temperatures in excess of 70 degrees and while QNAP states that is fine you would not want to place anything on top of it or put it in a closed cabinet with limited ventilation and it is twice the temperature of most NAS with fans.

We can’t wholeheartedly say yes and a big reason is the price. The HS-251 retails for a whopping £449.99. Thats nearly £200 more than the similarly specced two-bay DS214play and £50 more than the four-bay DS415play which has double the drives. Both Synology’s media-obsessed offerings also have more flexible RAID, tool-less drives, a better user interface and a slight edge in performance.

Despite this there is no denying the HS-251 is an excellent NAS and integrated HDMI will be a deal maker for many, but strictly speaking there are two better and cheaper options out there.

QNAP has dared to do something different and largely succeeded. The HS-251 looks good, is fast enough for its media centric purpose, fits in nicely under the TV and has integrated HDMI to directly connect to your TV. The problem is it is far more expensive than rivals that lack the HDMI but are faster with better setups and more flexible RAID options.

Next, read our Synology DS415play review