What is the Monitor Audio ASB-2?

Monitor Audio’s first ever soundbar is designed to bring audiophile sound quality into your living room without eating up precious space.

Unsurprisingly, it’s a high-end affair that hits the wallet harder than most soundbars on the market. That puts it in the same category as the sumptuous B&W Panorama 2 (which is still a good £650 more expensive) and the Libratone Lounge.

But it’s expensive for a reason – not only does it boast a jaw-dropping design that puts most soundbars to shame but it’s also equipped with features rarely found on budget models, such as AirPlay and multiple HDMI inputs. So if money is no object and you want a speaker system that minimises clutter, then the ASB-2 could be right up your street.

The ASB-2’s decadent build quality is apparent the moment you liberate it from the box. It’s a substantial soundbar, weighing in at a hefty 11kg and built into a sturdy mineral-filled polymer cabinet. It’s bulkier and more imposing than most soundbars, with a curvy shape designed to eliminate audio colouration, but it’s so beautifully styled that you probably won’t care.

The front is covered in a classy black cloth, while mirrored panels at both ends providing a touch of glamour. There’s no LED display, just a bar of light that changes colour to indicate which source is connected. Along the top is a row of buttons for up-close control, allowing you to adjust volume, select inputs and pair devices.

The ASB-2 can be mounted on the wall if you buy Monitor Audio’s optional bracket (£30), reassuringly described as ‘sturdy’ in the blurb. Alternatively you can rest it on a tabletop using the supplied silicon rubber stand. 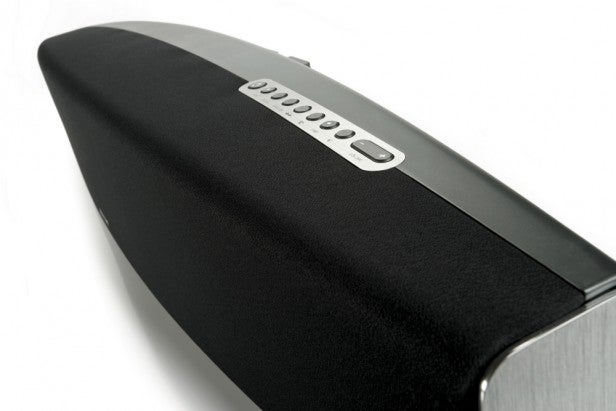 On the back is a generous array of sockets. Of greatest interest are the three HDMI inputs, ideal if you want to channel a Sky box, Blu-ray deck and games console through the speakers.

They all pass through 3D signals, while the v1.4 output supports the convenient Audio Return Channel feature, effectively bumping up the HDMI input count to four.

For all other audio sources there are two digital inputs (optical and coaxial), analogue RCA jacks and a 3.5mm minijack input. A subwoofer output is provided should the ASB-2’s own bass drivers not quite hit the spot, while a USB port is provided for firmware updates and AirPlay setup.

By far the sexiest feature on the spec sheet is AirPlay, allowing you to easily stream music from iOS devices or PCs running iTunes. AirPlay Direct support means you don’t even have to do it through your home network. The ASB-2 will also play music from DLNA and uPnP-compatible devices, but it’s a shame there’s no Bluetooth as that would have completed a pretty formidable wireless line-up. 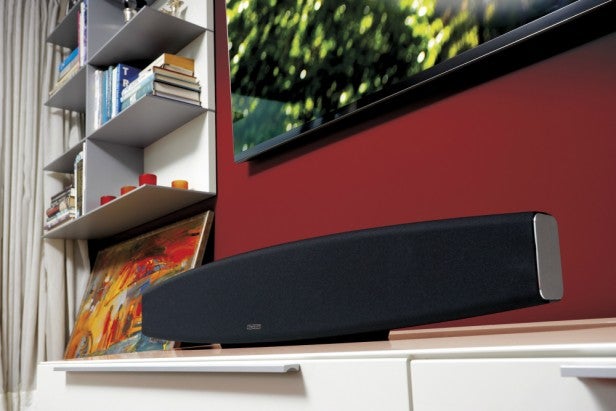 There’s no HD audio decoding or even Dolby Digital/DTS support, but it’s no problem as the ASB-2 accepts 5.1 and 7.1-channel linear PCM.