What is the Paradigm Soundscape?

Soundscape is a premium soundbar from Paradigm, a Canadian company with serious audiophile chops. As such, it’s being billed as a step-up from your average soundbar, drawing on the company’s enviable engineering heritage to deliver high-end performance from a single clutter-free cabinet.

Inevitably, this potential step-up in performance comes with a big step-up in price, putting it in the same bracket as other ‘luxury’ soundbars like the Monitor Audio ASB-2 and B&W Panorama 2. But if you don’t have room for a full speaker system and don’t want to compromise on sound quality then it could be money well spent.

As you might expect at this price, Soundscape is a beautifully engineered unit, blending debonair design with outstanding build quality. The clues are there when you first haul it from the box – at 9.1kg it’s reassuringly heavy, which means you’ll need some heavy duty fixings when mounting it on the wall using the supplied bracket.

If you opt for shelf placement over wall mounting then you’ll find rubber feet on the bottom for added stability. Size-wise its 1067mm width and 127mm depth make it most suitable for use with 50in TVs upwards.

It’s housed in a gleaming gloss-black cabinet with an alluringly curved back end and angled sides. A black cloth grille runs the length of the soundbar, which can be removed from the plug fixings if you want to see the driver array lurking behind (more on that later). It’s a stunning soundbar that exudes luxury. 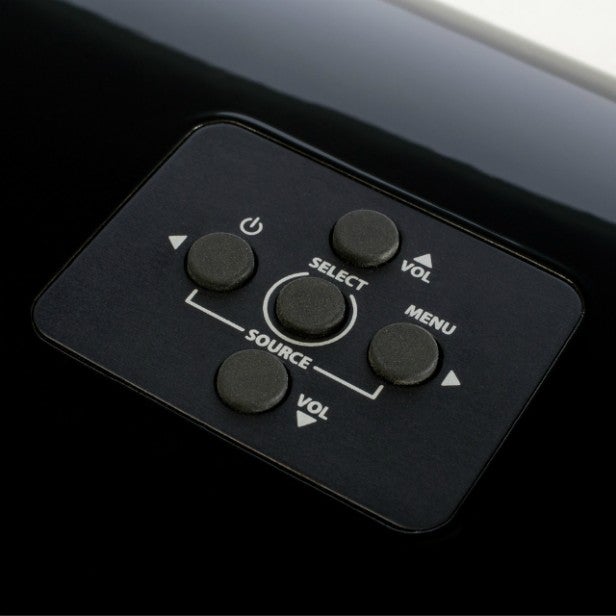 There’s a remote in the box, but you can control it up-close using the buttons on top. These allow you to navigate the menu, adjust volume and skip through inputs. On the front is an LED display, which gives all the relevant information in large blue digits. It’s bright and distracting, but thankfully you can dim it in the setup menu. 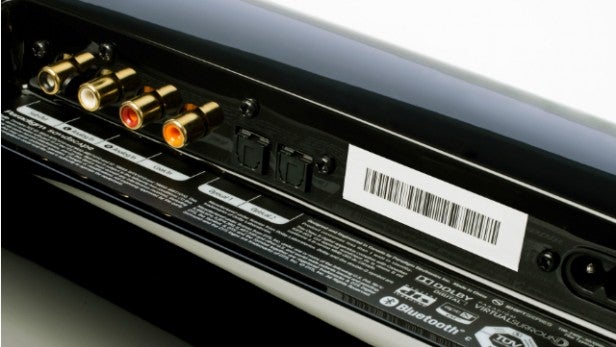 Taking a look at the rear panel, the first thing we noticed was the lack of HDMI inputs, which seems stingy given the price. It also rules out the possibility of Dolby True HD and DTS HD Master Audio decoding, which a high-end soundbar like this is made for. It’s also missing a USB port for hi-res music playback and a 3.5mm minijack input.

Still, Soundscape makes up for it with the inclusion of two optical digital inputs, a coaxial input and analogue stereo input. A subwoofer output is provided should you feel the on-board subs simply aren’t enough.

Additionally Paradigm supplies a wireless subwoofer receiver, which can be connected to any external subwoofer and allows you to place it anywhere in the room. Flexible touches like this are a godsend if you only have limited space to play with.

The lack of HD audio decoding aside, Soundscape offers a healthy range of features, although its target audience will be most interested in the impressive speaker technology on board.

There are three isolated channels – left, right and centre – and a total of seven drivers, each one powered by a separate amplifier channel (7 x 50W peak power).

The left and right channels each employ a 4in composite cone bass/midrange woofer and a 1in aluminium dome tweeter, while the centre channel uses two 4in cones, which flank the 1in tweeter. It’s a bass reflex design, with airflow being managed through ports at both ends of the soundbar.

The mid/bass drivers handle the low-frequency channel, working together as a subwoofer for frequencies below 120Hz. But as mentioned, you can add an external sub if you want even more oomph.

The Class-D amplifier’s digital signal processing not only shapes the soundbar’s frequency response but is also responsible for the Paradigm Virtual Surround mode. This proprietary platform distributes effects in a way that creates the illusion of surround sound, in a bid to make up for the lack of physical rear speakers. There are also Music and Movie modes, the former offering two-channel playback.

Despite its audiophile leanings, Soundscape is as easy to install and use as any mass-market soundbar. The lack of HDMI inputs rule out ARC, but the digital ports offer a simple one-cable connection between TV and soundbar. 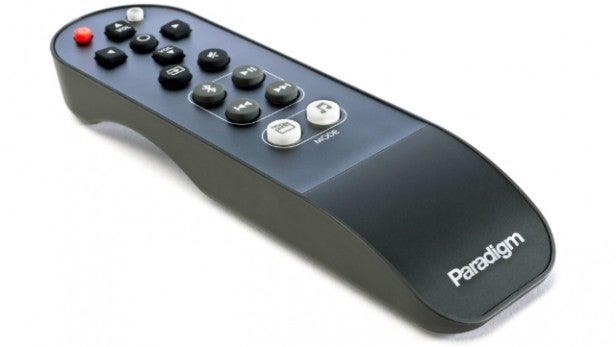 The soundbar’s full-size remote falls short of the main unit’s build quality, but it’s easy to use. The rubber buttons are logically arranged, with Bluetooth controls in the centre and dedicated buttons for Movie and Music modes at the bottom. The volume keys could have been bigger and more prominent but otherwise it’s a very likeable zapper. The soundbar can also be programmed to learn commands from other remotes if you want to stick with what you know.

Hit the white menu key at the top and the setup menu appears on the front display. There’s a lot to play with here, including bass, treble, loudness and surround settings, display options, subwoofer settings (wired, wireless or internal) and a choice of two EQ settings for on-wall and shelf placement. The cramped display panel means many of the words are truncated but you’ll get the hang of it.

Sensational isn’t a word we bandy about willy nilly, but it’s an adjective that the Soundscape’s performance richly deserves. Play a movie and it’s like Paradigm has set up a full-size speaker system at the front of your room, blasting out a huge, powerful soundstage that has no right to emerge from such a compact unit.

We tried out a few blockbuster Blu-rays and Soundscape blew us away with its amazing sense of scale, huge dynamics and crisp, attacking character. But what really separates it from lesser soundbars is its outstanding bass performance, which lends effortless richness and punch to action scenes without overstepping the mark.

Paradigm has made it easy to add an external subwoofer, but such is the slam generated by unit’s four woofers that you really don’t need one – trust us. Bass is tightly integrated too, so all you hear is a solid wall of sound that you can just lose yourself in.

That pays dividends with the frequent fight scenes in Thor: The Dark World on Blu-ray, which sound exciting and visceral. As the battle rages at Vanaheim, thunderous explosions and pounding horse hooves flood the room, plus there’s a potent yet well-controlled impact when Thor slams his hammer into the ground.

Soundscape’s polished high frequencies add an incisive leading edge to these bangs and crashes, and a clear rustle as the debris rains down onto the ground. It also nails the light metallic jangle of Loki’s chains and the gentle hissing when Jane first encounters the Aether.

Dialogue is beautifully handled thanks to the soundbar’s subtle bass depth and top-end clarity. Odin’s voiceover, for example, has a warm, authoritative tone yet the Paradigm teases out the subtle husk in his voice and locks the whole thing to the centre of the soundstage.

Paradigm Virtual Surround expands effects beyond the confines of the soundbar, which can be heard clearly when the rain starts lashing down as Thor visits Jane. That said, the effects are still localised to the front of the room, with no suggestion that they’re behind or beside you. Howev  er, its output is so big and loud that you kind of get swallowed up in the sound anyway.

Soundbars don’t have a reputation for being particularly musical but we were blown away by Soundscape’s two-channel performance. Streaming Jarrod Lawson’s jazzy debut album via Bluetooth, the drums sound snappy and energetic, hi-hats and strings have a silky, airy quality and there’s a warmth and purity to the Rhodes and piano chords that imbues everything with soul and emotion.

But what seals the deal is the outstanding bass reproduction – the woofers have the agility to keep pace with Lawson’s complex bass grooves and it gels everything together beautifully. 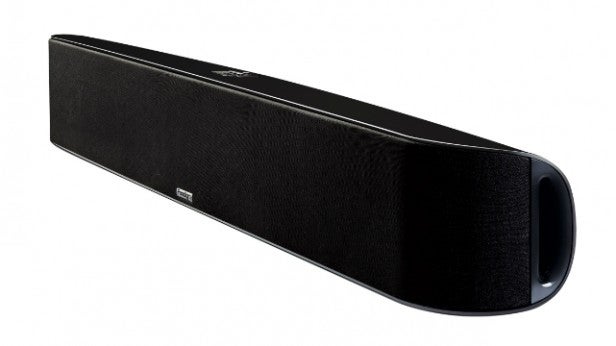 Should I buy the Paradigm Soundscape?

If you’re in the market for a soundbar and have a big budget to play with, the Soundscape is a worthy purchase thanks primarily to its sumptuous design and outstanding sound quality, which help justify the hefty price tag and earn it a Recommended badge.

On the downside there are no HDMI inputs and by extension no HD audio decoding, which might disappoint listeners looking for the very best movie sound quality. Some provision for hi-res audio would have been welcome at this price too.

Staggeringly good sound quality and debonair design make Paradigm’s Soundscape an impressive soundbar, but a lack of HDMI ports and HD audio might scupper the deal for some.