Pure’s One series isn’t what we first fell in love with Pure’s radios for – it was the Evokes that stole our heart – but it has become a mainstay of bedrooms, lounges and kitchens across the UK. Cheaper than the Evoke and Mio ranges, it has won many fans. The Pure One Classic Series II is the company’s affordable mid-size DAB unit that has now been updated with Pure’s Listen Later recording function. Yet, it still sells for less than £70.

In these heady days of always-on connectivity, wireless streaming and more apps than there are pounds in our bank account, it’s reassuring to see a radio like the Pure One Classic. It’s a simple DAB/FM radio that uses buttons rather than a touchscreen, laughs in the face of iPod docking (accessory available though) and wouldn’t have the first clue what to do with an internet radio station.

The new Pure One Classic is a fairly minor iteration on the previous model of the same name, with the same soft touch matt black finish, the same button arrangement and the same simple 2-line display. There are a few changes, though.

The finish on the buttons has been toned down from bright chrome to clouded silver – and the main control dial is now finished in ridged concentric circles.  The ReVu function, used to pause radio, has been replaced with the Listen Later feature. Allowing full recording of programmes, it’s slightly more ambitious than ReVu – more on it later.

Although the toning-down of the controls makes the new edition of the One Classic look a little more demure than its precursor, if you want a radio to look good in your kitchen or lounge, look to the Pure Evoke Mio or Evoke 1-S. Both sell for significantly more than the One Classic, but offer charming visages – this radio is utilitarian and drab in comparison. It’s all a question of what you’re after, though, and for many the £30 saving is well worth the aesthetic sacrifices. 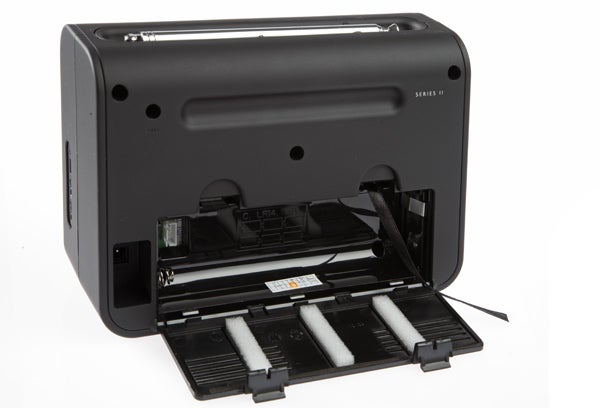 It doesn’t lose out on features compared to the basic Evoke models. It offers a 3.5mm auxiliary input, a miniUSB port for software updates, a headphone jack and a versatile battery compartment. It’ll take either C-size batteries – six of the blighters – or a ChargePak, Pure’s own lithium ion rechargeable unit. The C6L ChargePak that fits the One Classic sells for just over £30, and offers around 24 hours of DAB listening, and even more for FM. To be clear, though, no batteries are supplied with the radio as standard. An AC adaptor is though, naturally. 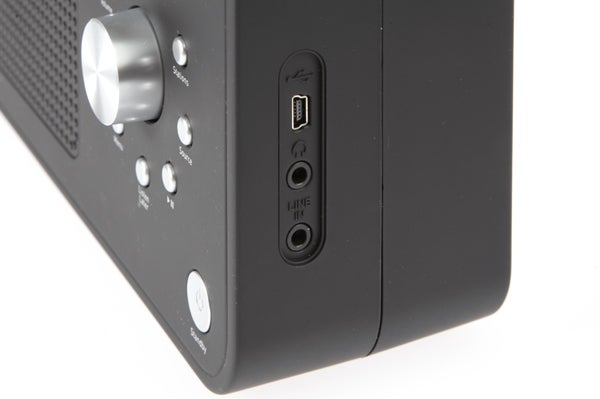 This is an exceedingly practical little radio, not quite as portable as the Pure One Mini but still small and light enough to chuck in a bag without bother, and blessed with an ergonomic finger recess on the back to make carrying it one-handed feel perfectly natural. Giving equal attention to function and form, the Pure One Classic isn’t stunning to look at, but it out-classes the rival Roberts Gemini. It’s no Roberts Revival or Evoke 1-S, mind.

In opting for the Pure One Classic, you miss out on the connected features of the Pure One Flow, its internet radio brother that costs around £20 extra. That little addition of Wi-Fi unlocks access to thousands of extra radio stations, podcasts, the BBC’s Listen Again content, music streaming, the Pure Songs music store and Pure’s library of relaxing (and often entirely not-relaxing) sound loops. It’s a lot to miss out on, but not everyone wants this extra functionality – especially those looking for a DAB radio to wake up to. 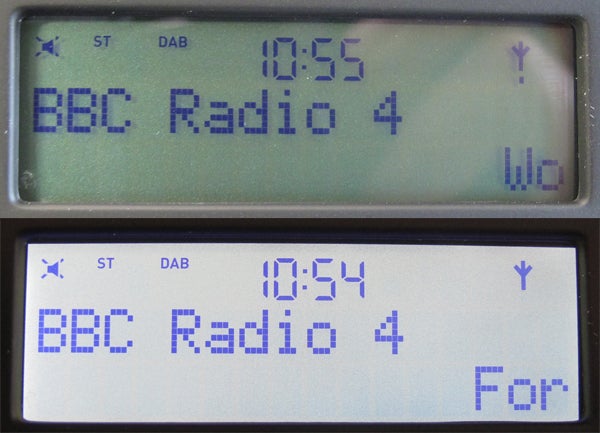 In use, the Pure One Classic benefits from the fairly high number of buttons on its front. This means that apart from tertiary features, like EQ, Intellitext and the alarm clock, functions can be accessed without flicking through layers of menus. It helps make the One Classic feel friendlier and more accessible than the One Flow. It’s a device even technophobes should be able to get on with.

The one slightly fiddly element is Listen Later, new to this second-generation Classic model. This allows you to record a programme to listen to at a later date, but the execution of this feature is deliberately limiting – and pretty old-school in its approach. Only one recording can be stored and the timing of it has to be set manually. There’s no EPG-like functionality here, although you can set a regular time to record each day or week.

A tap on the Listen Later button brings up a menu, where you set the time, recording duration, the frequency (once only, daily, all week days, weekends only and once a week) and the station to record. If you have a programme you listen to all the time – the Archers, or Stuart Maconie’s Freak Zone perhaps – this will come in very handy, but it’s very constrained compared with what the old Pure Evoke 3 offers. That top-end model features a card slot, letting you archive recordings rather than just wipe them instantly. 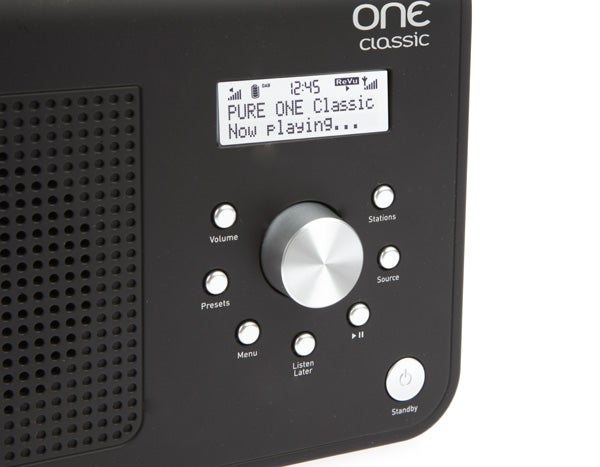 It’s in-keeping with the personality of the radio, though. The One Classic isn’t really a power user set. The maximum recording length is 180 minutes, although due to limited internal memory it won’t be able to hold the full length – Pure says that at the worst you should get 45 mins. When the full 180 minutes wouldn’t require more than a couple of hundred megabytes of data, this is a bit disappointing. It all depends on the bitrate of the station, and unfortunately as several of the best use higher bitrates, this limit is more likely to pop up when listening to a BBC station than Urban Cool Hits XXL Manchester.

Like the original One Classic, you can also use this internal memory to pause live radio – nothing new but brilliantly useful nevertheless. If you already download some of your favourite shows as podcasts, pausing could come in handier than all-out recording. However, if that sounds like you, it’s worth hunting around for a bargain basement one of the old generation One Classics as they have this feature to. We’ve found the older One Classic for under £50, which is a £20 saving not to be sniffed.

The Pure One Classic Series II has the same audio style as its predecessor and most of Pure’s one-speaker boxes. It’s warm, relatively bassy and handles the limited quality of DAB radio with ease. Many DAB stations are broadcast at criminally low bitrates, making digital artefacting horribly apparent when piped through analytical or trebly speakers.

The sound signature blasts away the slightly nasal sound that small kitchentop radios can suffer from, but be sure to keep your expectations sensible. There’s just a single 3in driver to deal out tunes and spoken word broadcasts, and it does sound conspicuously small when compared to larger systems, or Pure’s bigger Elite models. It won’t replace your hi-fi, or even a mini system, but let it do its job on home turf and it’s great – in the kitchen, bedroom or conservatory the One Classic Series II offers a solid compromise between price, size and sound quality. 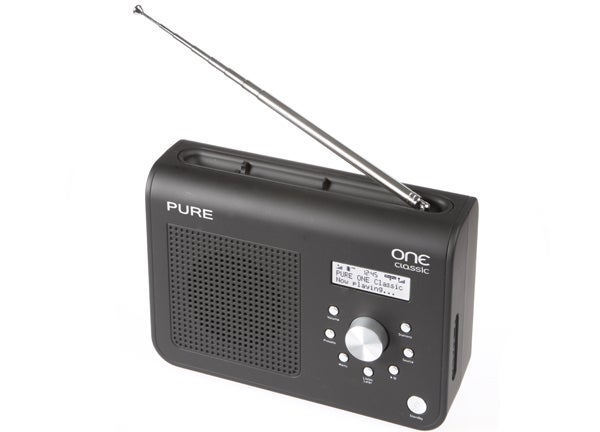 Unlike the last Pure radio we tested, the Pure One Flow, this box offers some basic equalisation settings too with customisable bass and treble levels. We found the standard setting adequate, but if you listen exclusively to spoken word stations like BBC Radio 4, you may want to turn the bass down a tad as it can make some people sound a tad muffled.

So the Pure One Classic Series II is a pretty good all-rounder but there are obstacles ahead of it, and the most dangerous are – at the moment – its predecessors. The amendments made in this “Series II” adjustment are not essential, while the falling price of the old guard makes buying one while they’re still around seem very attractive. You can nab the first-gen Elite model for five pounds less than the Series II at present, and we’d rather have the sound quality improvements of its dual-speaker system than the rather limited recording skills of the Listen Later feature.

This temptation will only be around for a short while, of course, as the final stocks of the previous-gen models are dished out. Pure’s key rival Roberts offers a few models worth considering too, such as the Gemini 45, but we can’t help but favour Pure in most cases – for its warm sound signature and less stick-in-the-mud design.

This Classic Series II model in the Pure One range isn’t a huge upgrade from its predecessor, and isn’t worth the extra if you already own a last-gen model. In addition to live radio pausing, the Series II adds basic recording. However, the many positives of the original are still here too. Good sound quality and simple operation make this one of the best kitchentop radios you’ll find.