In this day and age, the concept of a stand alone radio seems almost quaint. However, some people, believe it or not, like to listen to radio, without the use of a PC.


No one knows this better than Pure Digital, the self proclaimed ‘World Leaders in DAB Digital Radio’. DAB of course, is Digital Audio Broadcasting, which broadcasts the radio that Queen went Ga-Ga for over the air using ones and zeros rather than analogue signals. The main benefits of this is that you can choose stations from a list rather than a frequency, and that, assuming you’re in an area of good DAB reception, the signal is free from interference such as hiss and fade. 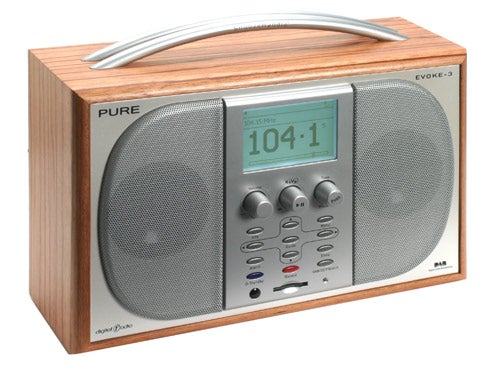 You can check if you can receive DAB on the Pure web site. If you can’t reach DAB then the Evoke-3 supports FM too but it would be a waste not to use it as intended as DAB enables you to perform a whole host of clever tricks and Pure’s Evoke-3 can pretty much do all of them, and then some.


Pure has dubbed the Evoke-3 as, ‘The world’s most advanced DAB radio’ and to be fair it’s a very reasonable description. Sporting a wood veneer finish the Evoke-3 will look good wherever you choose to place it. It’s also got two speakers, rather than the single driver that many of the earlier Evoke sets offered, to give stereo sound. Inevitably, the fact that the speakers quite close together means that the sound-stage is quite narrow but should that be a problem there is a line out, so you can hook up to external speakers.


Like earlier Evokes it has a LCD display but it’s larger than before and can show six lines at once and displays the time nice and large. While tuned to a station you can see all the broadcast text at a glance – great for seeing the football scores. 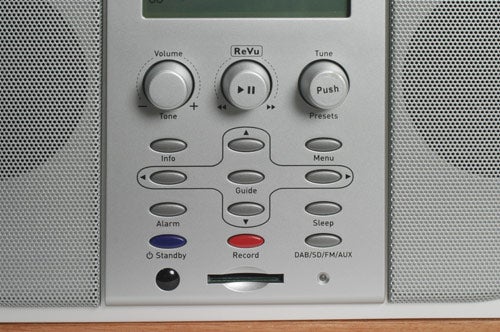 The first thing to do when you plug it in is to perform an Autoscan to see what stations you can pick up. It’s best to do this with the aerial extended as this can make a difference between strong reception and none at all. Pretty much the only thing the Evoke-3 is missing is an aerial-in socket for connection to a fixed mast – you have to rely on the built-in aerial.

One you’ve done the scan, which only take about a minute you should look out for stations that have the letters EPG next to them. This indicates that there is an Electronic Programme Guide available for that station. Pure’s Bug radio can also view EPG data, but it’s the large display on the Evoke-3 that really makes it useful.


If a station supports an EPG you press the Guide button that sits in the centre and a full schedule for that station is brought up. You scroll up and down through it using the Tune button and press the up and down buttons to view up to seven days in advance. The left and right buttons enable you to move between the EPGs of different stations. Up to 20 recordings can be scheduled at once and it’s extremely easy to use. 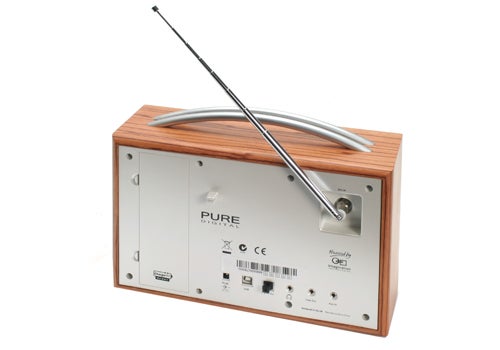 The really cool bit is that by pressing in the Tune button you can schedule the selected programme to ‘Tune-in at the selected time, or even better, to record, just like Sky +, but for Radio! I used this feature to record some favourite shows, and copy them over to my iPod so I can listen to them when I want. In an age of podcasting, this is a technology that brings ‘live’ radio right up to date.


Recordings are made to SD memory card and a slot sits at the button on the front fascia. With a 2GB card you could record up to 30 hours of programmes, but a 64MB card is supplied to get you started. 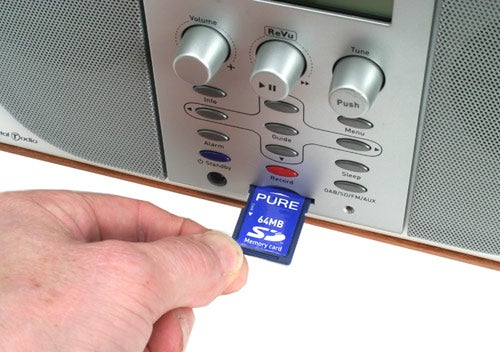 When you press record you even get the option to either to the SD card or to the digital out, so you could capture for example straight to Minidisc. If you have a memory card in the slot you can press the record button manually at any time. Recording quality is identical to the broadcast signal, directly capturing the live MP2 stream. Usually, these are labelled automatically with both title and the ID3 tag filled in with the time of the recording, the station and the Comment field is even filled in with ‘DAB grab’. However, if it’s a recording using the EPG the actually show name is captured too. Superb.


Naturally, the Evoke-3 supports Pure’s ‘Revu’ which means you can pause a recording, and it will buffer the show so that you can resume when you want and fast forward and rewind, just by turning the Revu dial. Again, it’s very easy to use.

Alternatively, if you’ve got MP3s (WMA or AAC are not supported) on an SD card you can play the files straight off from the card. There’s also an auxiliary in so that you can hook up an external audio source, such as an iPod, and play it though the speakers.


Round the back you’ll find a headphone socket should you wish to listen in private, and there’s also a USB connector. This enables you to hook it up to a PC and upgrade the Firmware to add or improve functionality or remove any bugs. The only issue I encountered while testing is that a comedy I recorded overran so the recording cut off the end. Perhaps a buffer feature at the start and beginning or a scheduled show could be added, a la Sky +. 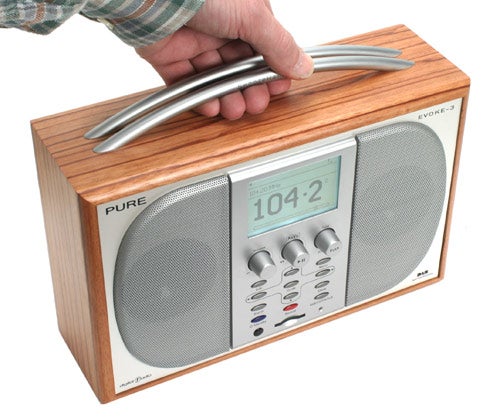 There are no less than 20 alarms and you have the set beep at you or play a station of your choice. A neat feature is the Snooze handle. Press the handle when the alarm goes off and it will snooze for a preset amount of time – eight minutes by default.


The Evoke-3 is powered by the mains, but can also be powered by a set of six size C batteries or a ChargePAK. These are rechargeables that are designed exclusively for Pure radios and charge while plugged in. It also has a remote control.


As far as sound quality is concerned the Evoke-3 sounds as good as you could possibly expect considering the size of the 3in drivers, the proximity of the speakers to each other and the bit-rate limitations of DAB. I was taken with the warmth of the sound and the limitations only became apparent when I was listening closely to recordings on headphones, – revealing slightly muddied sound and wishy-washy cymbals – but hey, it’s radio, not SACD. 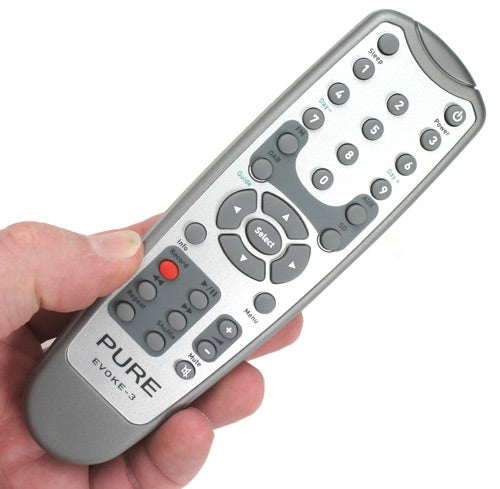 The Evoke-3 is undoubtedly as fine a radio as you could hope for. An SD card and an EPG can free you from having to worry about radio schedules and it looks and sounds great. Pure even provides a two year warranty, which is good to see compared to the usual single year offered on most products these days. The only downside really is that you have to pay a premium price for a premium product – but I think it’s worth every penny.


The Evoke-3 is DAB radio at its finest. It’s looks and sounds great and being able to schedule recordings onto memory card will revolutionise the way you listen to radio. Highly recommended.