What is the Pure Evoke H6?

The Pure Evoke H6 is a classic-style DAB radio. It doesn’t adopt a modern look in the way of the Evoke F4 and also leaves out potentially confusing features such as internet radio and Spotify streaming.

Instead, it has a DAB tuner, an FM tuner and Bluetooth – which is one of the simplest ways to stream audio wirelessly, regardless of the kind of phone or tablet you use.

There will be many who will be attracted by the look of the Pure Evoke line. However, at £200, I’m a little disappointed by the out-of-the-box sound quality and some of the build downgrades compared to the classic Evoke lines. 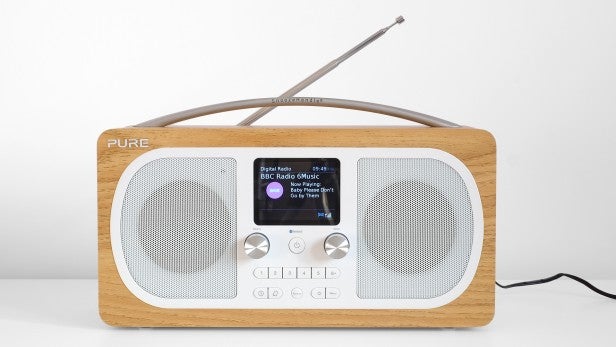 When people talk about DAB sets then there’s a good chance that it will be either a Pure Evoke or a Roberts Revival that will come to mind. Both have been around for a decade, and have a retro appeal that hasn’t faded, despite the advancements in tech in that time.

The Pure Evoke style is built around a wood trim, where the Revival style is more leather. 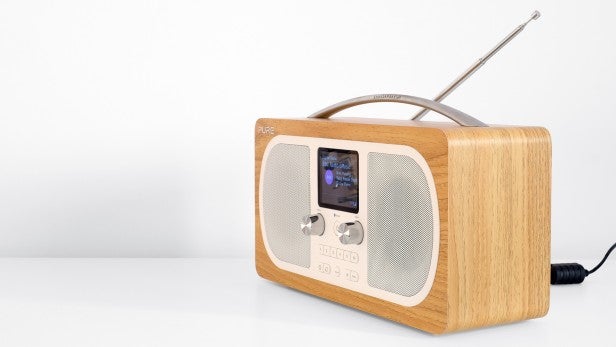 Older Evokes let you choose between a few wood finishes, but perhaps thanks to the diminishing sales of DAB radios, you get only the one light-wood effect here. This is where we see the main build issue of the Evoke H6. Where Evokes used to have a real wood veneer, the Evoke H6 uses a fake printed veneer with little indentations to make it more convincing.

The Evoke H6 feels solid nonetheless, with a reassuring weight you don’t see in cheap DAB sets, but some of the Evoke class has been stripped away. 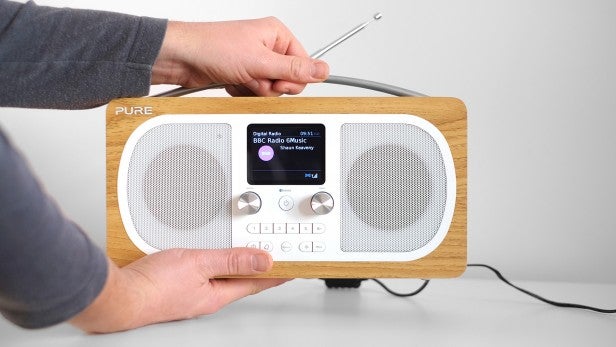 It feels much like the older models in use, however. The Pure Evoke H6’s knobs and buttons all feel good, unlike many a cheaper radio.

Its screen is solid too. While low-res, it’s clear and uses an OLED panel. With this sort of display, only the pixels displaying something emit light, and you don’t get the annoying screen-wide glow of an LCD. This is a big plus if you want a radio for the bedroom. 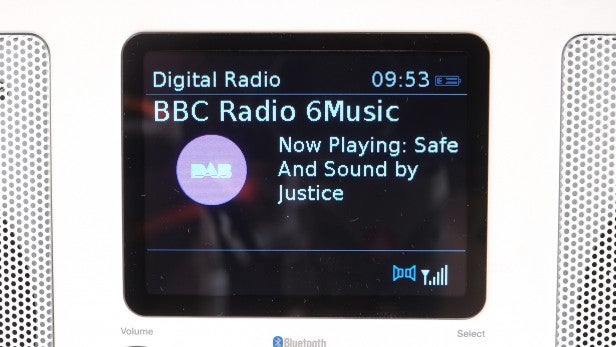 The Pure Evoke H6 also has one of my all-time favourite Pure features, the SnoozeHandle. Just as it sounds, this means the metal handle on the top can be used to ‘snooze’ your alarm with a quick tap.

It’s perhaps a little too easy to use if you’re a serial snoozer, and you can’t turn it off, so make sure the Pure Evoke H6 won’t ruin your sleep discipline before buying. 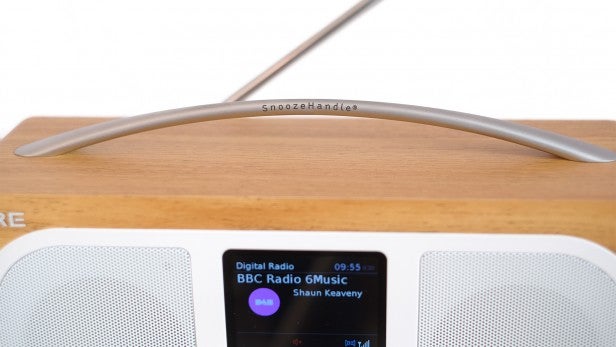 Accessing the alarm settings is very easy, too. There’s a dedicated alarm button that takes you right to the setup options for them. There are two, letting you set one for weekdays and weekends, for example, or one for you and another for your partner.

The alarm menu page has a timer, which is handy if you’ll use the Evoke H6 in the kitchen rather than the bedroom. There’s a sleep timer function, too, which again has its own button. This turns off the H6 automatically when it hasn’t been touched for 15-90 minutes; you specify the delay. It’s there so that you can nod off to Radio 4, or whatever you fancy.

Pure has the simplicity angle nailed. You just hold a finger down on one of the five main preset buttons to set favourites, and those with a real radio obsession can set a full 20 using the “6-plus” button next to the main five. 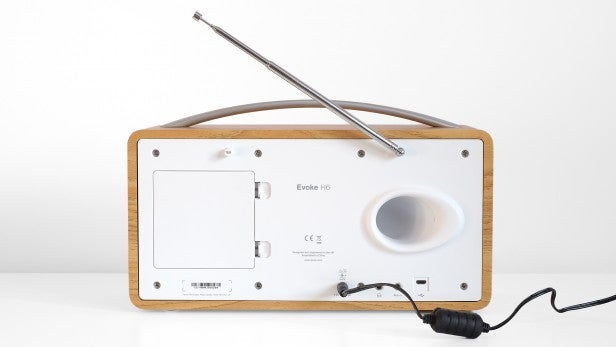 The one Pure Evoke H6 feature not seen in the older Evokes is Bluetooth. This lets you stream music from your phone or tablet. It’s something real technophobes might ignore, but without it the H6 would feel outdated.

If you haven’t used a Bluetooth speaker before, linking the two devices is as simple as finding the Bluetooth part of your phone’s settings menu, tapping the Source button on the H6, and scrolling to Bluetooth. Then select Pure Evoke H6 on your phone when it finds the radio. 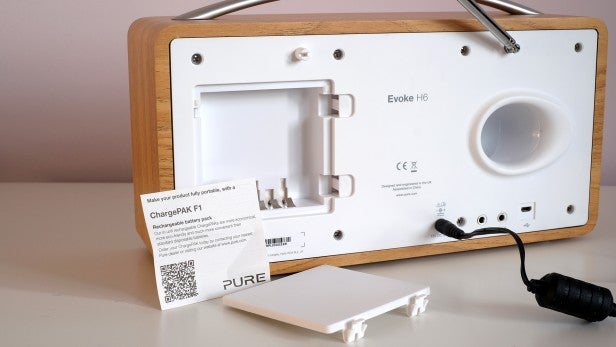 The Pure Evoke isn’t a “natively” portable radio since it doesn’t have a battery. However, there is a compartment on the back that takes one of Pure’s F1 ChargePaks. These cost £35 and will let you use the H6 for “up to 50 hours”. I’d advise against expecting quite that much, though, since this is one of the larger radios to use the battery. Still, it will last for ages between charges.

There are also a couple of extra features on the Pure Evoke H6’s rear. A 3.5mm output socket lets you plug in headphones and a 3.5mm input will hook up with any other devices. The Micro USB port you can see below is used only to upgrade the firmware. 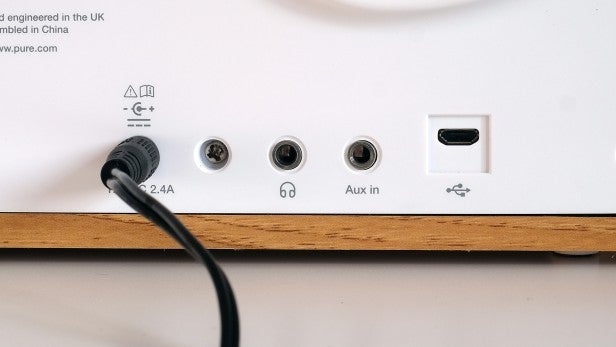 The Pure Evoke H6’s design has weathered pretty well over the years, but its sound quality is showing a few cracks. The past couple of years have seen radical increases in sound per square inch among smaller speaker boxes, and the H6 appears a little left behind by wireless speakers such as the Bose SoundLink Mini II and more recent designs such as the Roberts Revival Mini.

But it isn’t all bad. 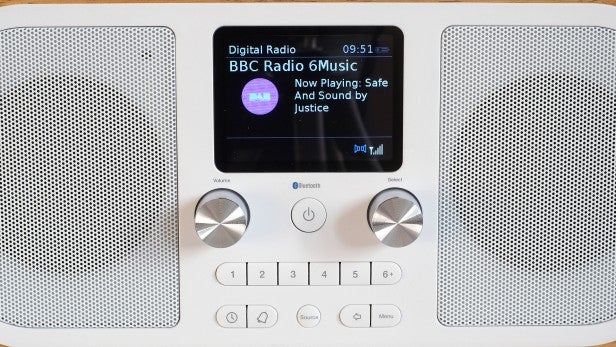 The Pure Evoke H6 doesn’t have the small, tinny radio sound you’ve probably experienced at some point in your life. It can go loud, it sounds thick, and has enough meat not to seem remotely out of its depth with music.

However, the bass is slow, overblown and stodgy, causing a bassy bed when you’re listening to spoken programmes, and making music sound a little sloppy. It ruins rhythmic drive.

There are numerous EQ modes in the Pure Evoke H6’s menu, but they don’t make as pronounced a difference as I’ve heard in previous Pure radios. It seems that whoever signed-off the Evoke H6 sound was a bit too keen to make it clear that the two 3-inch drivers make it more powerful than a unit such as the Evoke F4. 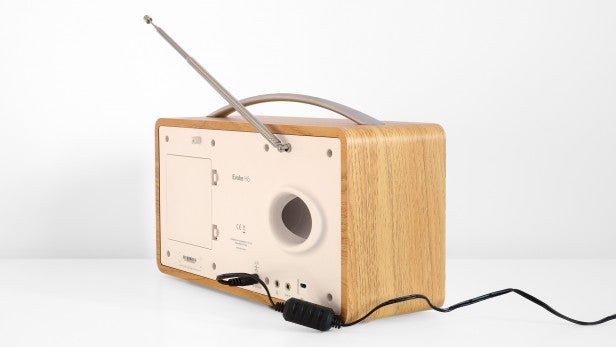 Next to the Evoke F4, its treble is also softer, letting the bass dominate further. The Evoke H6 is a significantly louder, larger-sounding radio, but in 2017 the audio seems quite lo-fi.

There are some important caveats, though. Contrary to DAB radio’s messaging, the audio quality of most DAB radio stations is poor and the softer audio signature of the Evoke H6 hides this very well because it’s the treble that usually shows this up.

The undisciplined bass also isn’t going to be much of an issue if you’re going to use the Evoke H6 in a noisier environment, such as the kitchen. It will actually make the radio deal with the noise of cooking better.

There’s also a way for sound pedants to fix the H6’s bass.

In addition, you can create a custom EQ preset to help solve the sound balance. If you buy an Evoke H6, try creating an EQ profile with -3 or -2 bass and plus 2 or 3 treble. This makes the sound much cleaner and less boomy, more like an upgraded version of what I hear in the Evoke F4.

It sounds like a whole new radio. That you can zap the bass this extensively and still get solid bass shows how over-emphasised it is with the default EQ. Adding treble doesn’t introduce harshness, either.

Should you buy the Pure Evoke H6?

Right out of the box I was disappointed with the Pure Evoke H6; from the fake wood veneer to the default boomy sound that none of the built-in presets get close to solving.

Put some effort into tweaking the settings, however, and the H6 can turn into one of the better-sounding large DAB radios, as well as a satisfying Bluetooth speaker.

You can do better for £200 if you’re not bothered about the DAB look and functionality, but then you probably wouldn’t be considering the Evoke H6 in the first place.

It’s an odd case of a radio that is good in spite of what its maker has done to it.

A great classic DAB radio – if you put the effort into taming its boomy bass.